In this unexpected time of self-quarantine, binge-watch your way to overcome the COVID-19 blues

COVID-19 has put an end to all plans, outings and even a regular trip to the supermarket. With no option but to stay home, we urge you to make the best of this time - spend some quality time with family members, learn a new skill, read the books you wanted to or watch all the movies you planned to watch but never could. This is the time to achieve that perfect work-life balance and catch up on all the things that you missed because of ‘time nahi hai’ (there is no time). If you need suggestions for movies, we have some:

1. Once Upon a Time in… Hollywood

Get a taste of the old-world charm with Quentin Tarantino’s star-studded Once Upon a Time in… Hollywood featuring Leonardo DiCaprio and Brad Pitt. Playing the roles of a veteran actor and his best friend who is also his stunt double, they find themselves in a soup when they discover that Hollywood isn’t the same as they are hardly recognized anymore. If you’re looking for a tribute to Hollywood’s golden age, this one’s for you to cosily binge-watch.
Available on HOOQ, Amazon Prime

If you haven’t watched this Oscar-nominated film yet, forget about all the plans you’ve made for the weekend and watch the psychological thriller that made even Batman run screaming for the hills. The film is dark and compelling and will also make you feel almost sorry for him on his journey to self-destruction. Prepare to be absolutely mesmerised by Joaquin Phoenix’s stellar performance as he captivates your senses with his chilling character.
Available on HOOQ

With seven Academy Awards nominations, The Shawshank Redemption is regarded as a classic and culturally aesthetic film that has ever been made. The plot revolves around a swanky banker convicted for double murders and given two life sentences at the Shawshank prison where he befriends inmates and forms a friendship that gives them hope for the future. Doing justice to the roles are Tim Robbins and Morgan Freeman whose stellar acting never fails to impress.
Available on HOOQ, Hotstar

4. Indiana Jones and the Raiders of the Lost Ark

This is the ultimate movie featuring a treasure hunt of sorts by an archaeologist Indiana Jones played by Harrison Ford. It’s the complete package for mystery, adventure, history, strategy, planning and plotting along with scenic landscapes of lush green forests and ancient lettering clues. Join in on the adventure with Indiana Jones and the Raiders as they fight tooth and nail to covet the lost Ark.
Available on Netflix 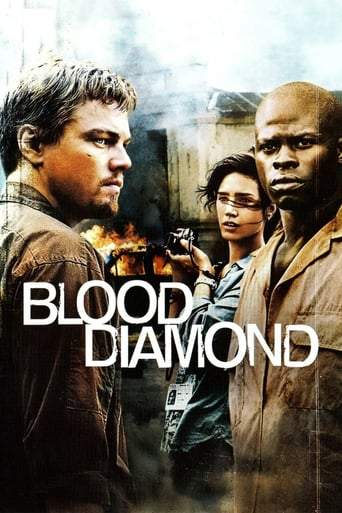 The Oscar-nominated political war thriller is bound to make every sense of your being come alive. Blood Diamond is a gripping film blended with strong drama, action and emotions in a conflict-ridden South Africa set during the 90s’ Sierra Leone Civil War. Starring Leonardo DiCaprio and Djimon Hounsou, watch as the story unfolds from desiring financial rewards for blood diamonds to seeking redemption in a war zone.
Available on Hotstar, Netflix and HOOQ

Praised for being one of the greatest science fiction films of all time, The Matrix will bewitch you with its Oscar-winning stunning visual and sound effects, film editing, and arresting action sequences. The turn of the century witnessed the birth of the popular slo-mo visual effect ‘bullet time’ through this film. Enthralling performances by Keanu Reeves, Laurence Fishburne and Carrie-Anne Moss among others, by the end of the movie, you’ll wish you were in The Matrix setting too.
Available on HOOQ

7. The Wolf of Wall Street

This one will especially hit home for all the white-collared folks confined at home. If you haven’t watched this yet, there can’t be a better time. The Wolf of Wall Street is a humourous and dark take on the corporate life and the not-so-smooth sail to build an empire. Allow Leonardo DiCaprio, Margot Robbie and Jonah Hill to charm you away with their performance in this fast-paced comedy and relatable moments of choosing between the right and the wrong.
Available on Amazon Prime

Numero Uno in terms of magic and wizarding world, the Harry Potter franchise with all of its eight fantasy films have captured the hearts of everyone. From magic wands to life-size chess and invisible cloaks to the flying broomstick, Harry Potter is above and beyond magic. With an amazing storyline and focus on values such as friendship, integrity, bravery and courage, Harry Potter and the crew are friendship goals for all of us. Catch up on all the eight films during this time of dedicated binge-watch without hindrances.
Available on HOOQ

This comedy movie will give you major all-American feels with its pocketful of surprises. A wild bachelor trip with no memory of the previous night whatsoever, resulting in the groom gone missing is a sneak peek into the first film in the series. Road trips, casinos, a tiger and a baby add to the existing chaos and definitely lighten you up no matter what mood you’re in.
Available on Hotstar, Netflix and HOOQ

10. The Curious Case of Benjamin Button The Curious Case of Benjamin Button starring Brad Pitt and Cate Blanchett is based on the short story by Scott Fitzgerald and it swept away a whopping 13 Academy Awards nominations. A unique enticing story of a man who ages in reverse and the struggles he endures is truly motivating but his passion for life is what captures the heart of the audience. A must watch this season to appreciate the little moments in life.
Available on HOOQ