The announcement was made by Eros Now that's presenting the film. The company tweeted, "*A big announcement!*- Today, even as we deal with a deadly pandemic, the one faced by our forests, that of human encroachment and deforestation continues to loom over us. Be a part of this thrilling battle with #HaathiMereSaathi, releasing in theatres on Makar Sankranti 2021!" 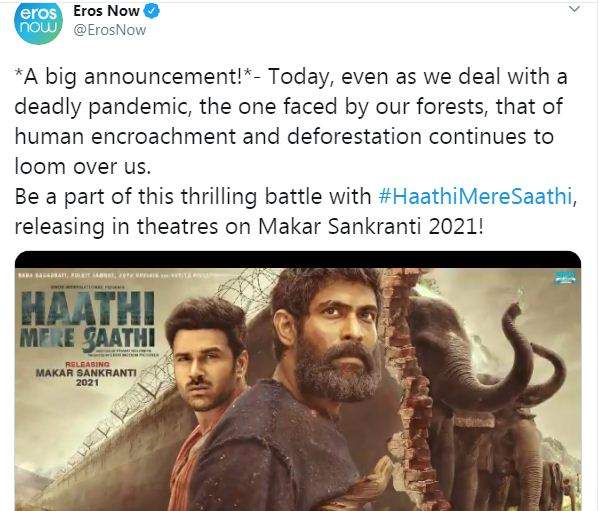 Among other actors, Vishnu Vishal, Pulkit Samrat, Shriya Pilgaonkar and Zoya Hussain play pivotal roles. Directed by Prabhu Solomon, the film was simultaneously shot in Tamil, Telugu and Hindi. In Tamil it is titled Kaadan, Aranya is the Telugu title, while in Hindi it is named Haathi Mere Saathi. The film was scheduled to release in April 2020, however, because of the pandemic, the film's release got pushed. Now it is scheduled to release in theatres across India during the Makara Sankranti-Pongal weekend in January 2021.

The film explores the conservation of elephants and has been extensively shot in South India.