The wait has come to an end! KGF: Chapter 2 to be released on July 16

Directed by Prashanth Neel, the movie will be a sequel to Kannada blockbuster KGF: Chapter 1 that was released in 2018. KGF was the Kannada film to rake in more than ₹200 crore in the box office.

The sequel will mark Bollywood actor Sanjay Dutt’s debut in the Kannada film industry. Dutt had to take a break from shooting for the film since he was diagnosed with cancer. However, he returned soon after treatment to finish the shoot. The Bollywood actor will play the role of ‘Adheera’ in the movie.

Meanwhile, Raveena Tandon will take up the role of the Indian Prime Minister in the film.

Actor Yash, who will be playing the lead role ‘Rocky’, took to Twitter on Friday to announce the date of release for the movie. He shared a poster of the film with the caption, “Fasten your seat belt coz the date is set.” 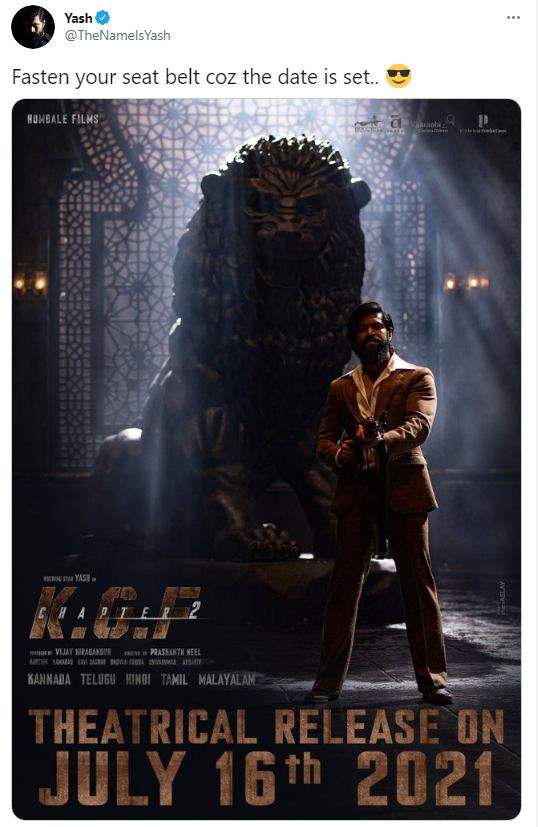 The story is about a poor man who rises to power at a gold mine by becoming a gangster.

According to media reports, KGF was inspired by a real gangster called Rowdy Thangam. The claim was made following a petition filed by Thangam’s mother Pauli seeking to pause the shoot for the sequel since she felt the first film had shown her son in a poor light.

KGF: Chapter 2 will be released in Kannada and dubbed in Tamil, Telugu, Malayalam, and Hindi.

The sequel’s teaser, which was released earlier this month, went viral on social media and left fans eagerly awaiting its arrival on the big screen.