When asked about the journey of the Attakkalari India Biennial so far, Jayachandran Palazhy, artistic director of the Attakkalari Centre for Movement Arts, takes us back to the very first edition. “We had one or two international troupes participating, and a few locally known choreographers. It was all quite small scale,” he recalls. Now in its eighth edition, the festival of contemporary dance will see over 20 troupes, featuring a total of 200 artistes from countries such as Poland, Netherlands, South Korea, Canada, South Africa, Switzerland and Finland. With ‘Bangalore Moves’ as the theme, the festival seeks to present an artistic commentary on the state of the metropolis, while also celebrating the spirit and creativity of Bengalureans.“We want to pass on the message that the city moves despite its traffic woes,” offers the artistic director. “The festival will celebrate and capture the dynamism and vibrancy of young Bengaluru. This is why we have scheduled performances and sessions at venues such as Rangoli Metro Art Centre,” he adds. We caught up with a few of the participating artistes to give us a peek into what to expect at the 10-day event. 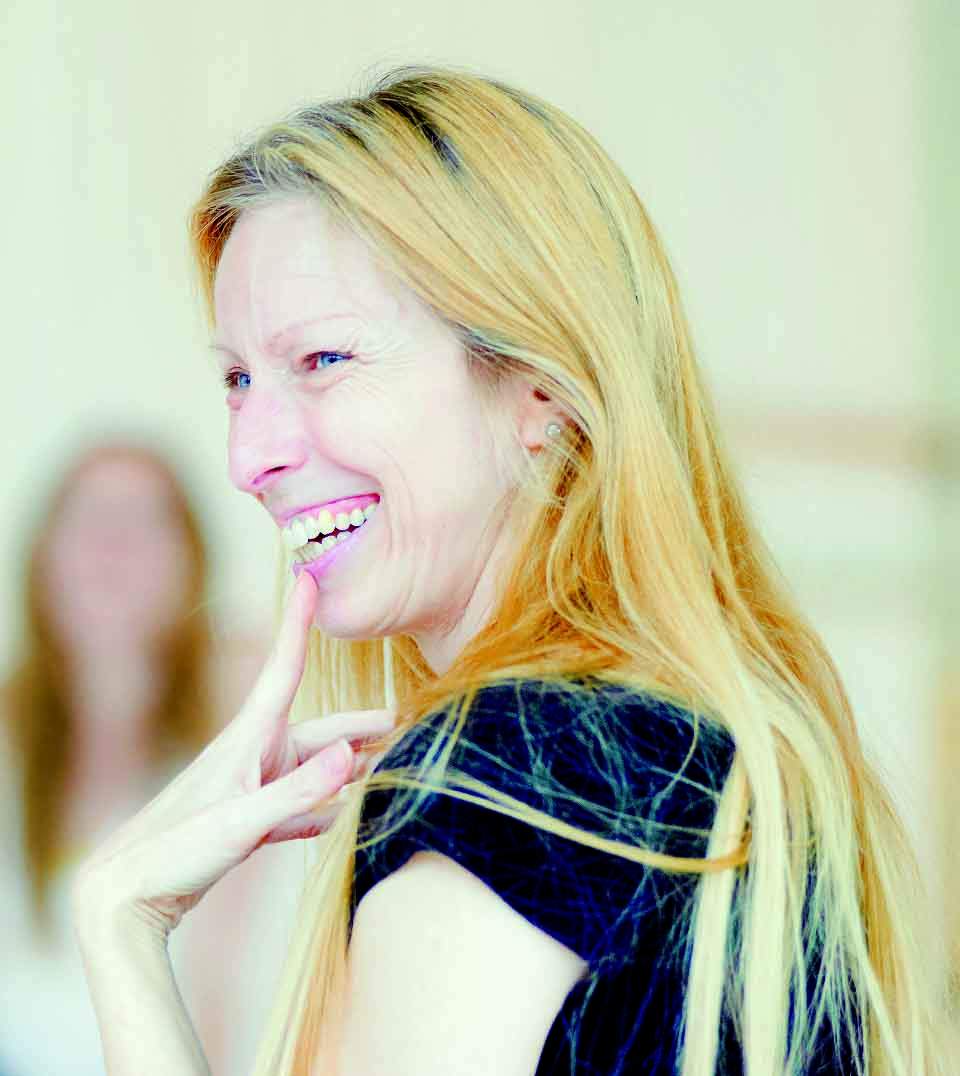 an understatement. Having kicked off her career in 1978, it was nearly 12 years later that she set up her own company, based in Montreal, Canada. Chouinard brings a troupe of ten dancers — six women and four men — to the biennial, and will present two pieces that have been performed around the world for close to 25 years. “As a choreographer, I am not experimenting with a style, I am creating it,” enthuses Marie. “More precisely, I am constantly experimenting with creation, experimenting with the renewal of the language, deepening the understanding and intuition of the body and soul,” she shares.The troupe will perform 24 Preludes by Chopin, a choreographic work that deals with the demands of a classical art form, which has been hailed as one of her most creative and lavish pieces to date. The Rite of Spring is her other production, exploring  a new, post-modern world through contemporary dance.
February 11, 7.30 pm. At Chowdiah Memorial Hall, Malleswaram

Choreographed by Rachid Ouramdane, the Centre Chorégraphique National De Grenoble or CCN2 will present Tordre (French for Wrought). Known for his work that combines dance with documentaries, 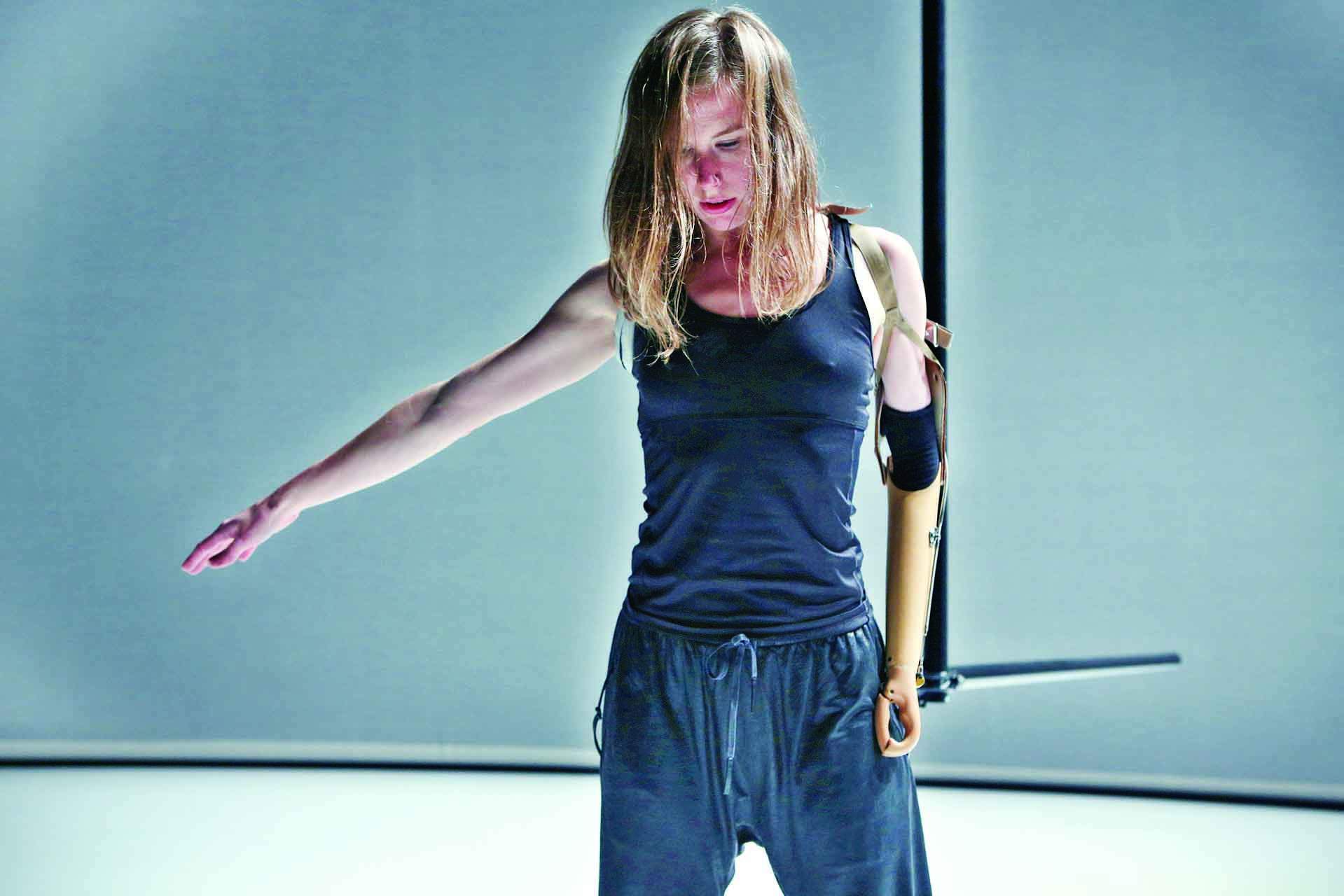 Rachid often attempts to comment on global issues with his art. Tordre will see two of his long-time collaborators, Lora Juodkaite and Annie Hanauer perform solos in what is best  described as a ‘haunting duet’.
“Lora, whose moves involve spinning dizzyingly on the spot, has developed her own way of movement, which has supported and comforted her ever since she was a child. British dancer Annie, on the other hand, moves with a prosthetic arm that is at the same time an extension and an integral part of her body,” reveals Rachid, adding that the duo uses their bodies to paint an intense portrait of themselves and their individuality.
Rachid decidedly uses space to his advantage. “I focus on the emptiness that surrounds the performers,” he explains. “I often say that I don’t choreograph for bodies, but for space. The performers shape and sculpt the immaterial space that surrounds them. For Tordre, the space will be totally empty, with two spinning structures that create a hypnotic effect,” he offers.
February 5, 7.30 pm. At Ranga Shankara, JP Nagar

From the Vuyani Dance Theatre, one gets a view of the culture of South African Society — a refreshingly new subject, as far as Bengaluru is concerned. Founded in 1999 by Gregory Vuyani 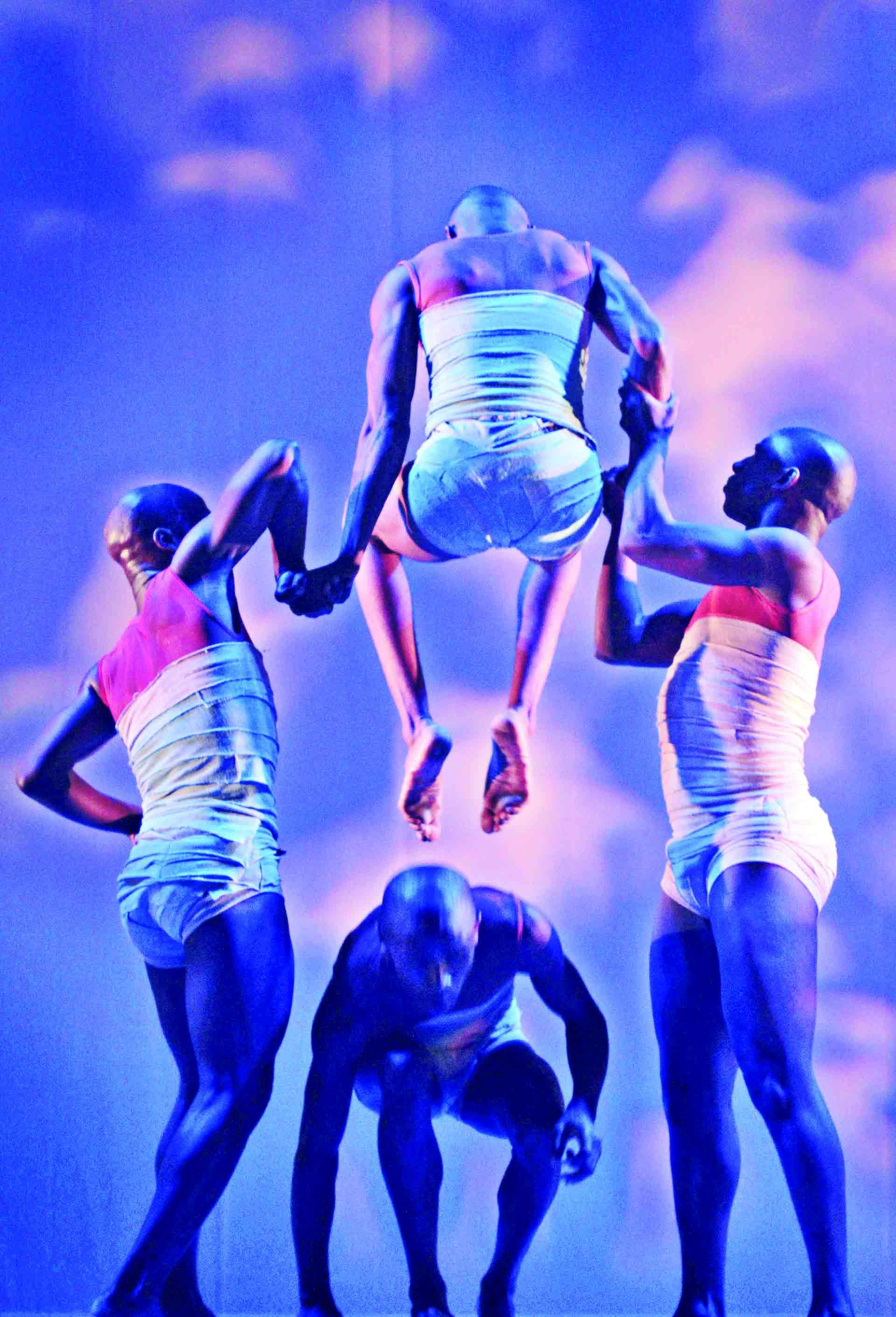 Maqoma, the company is best described as a fusion of African contemporary urban styles, music and culture, and those derived from European countries.
The subjects of the productions deal with challenging social values and delving into history, to present certain topics in modern light. “My signature fuses different traditional forms of African origin, but is also aware of the growing trends within the urban modern context,” offers Gregory. “I am also dealing with themes that are pertinent to my continent as a form of response,” he adds. Gregory’s troupe will perform the piece, Ketima. Created in 2003, the show features a male quartet inspired by the innocence of a child. The performance explores the themes of birth and the stages of life, from learning to talk, to crawling, running and growing old.
The dancers are accompanied by a live percussionist, who also plays the role of a storyteller and a witness to the cycle of life, while the lighting arrangement plays with the ideas of confinement and depth.
February 4, 7.30 pm. At Chowdiah Memorial Hall, Malleswaram

Attakkalari Repertory Company
With formal training in diverse art forms such as bharatanatyam, kathakali, kalaripayattu, capoiera, ballet and African dance, it’s no surprise that Jayachandran Palazhy has managed to make a mark on, if not define, the contemporary dance scene in India. Acclaimed for their edginess and outlandish body of work, the Attakkalari Repertory Company has staged shows at festivals such as the Venice Biennale, the Munich Contemporary Dance Festival, the Trafalgar Festival, the Seoul International Dance Festival, the Tanzhaus Dusseldorf, the Yokohama Redbrick Theatre, and the Ballet National de Marseille in France.
“Our work at Attakkalari involves processing traditional movement ideas through the framework of contemporary experiences and imagination. While our work has been informed by this process over the years, now I find that it is maturing. I feel, generally, the quality of contemporary movement arts in India is improving every day,” says Jayachandran. At the Biennial, his troupe will present Bhinna Vinyasa, which is an attempt to look at the world from multiple perspectives — not just human, but also that of inanimate objects.
“We live in unusual times, where the pace of change is quite high,” offers Jayachandran. “ 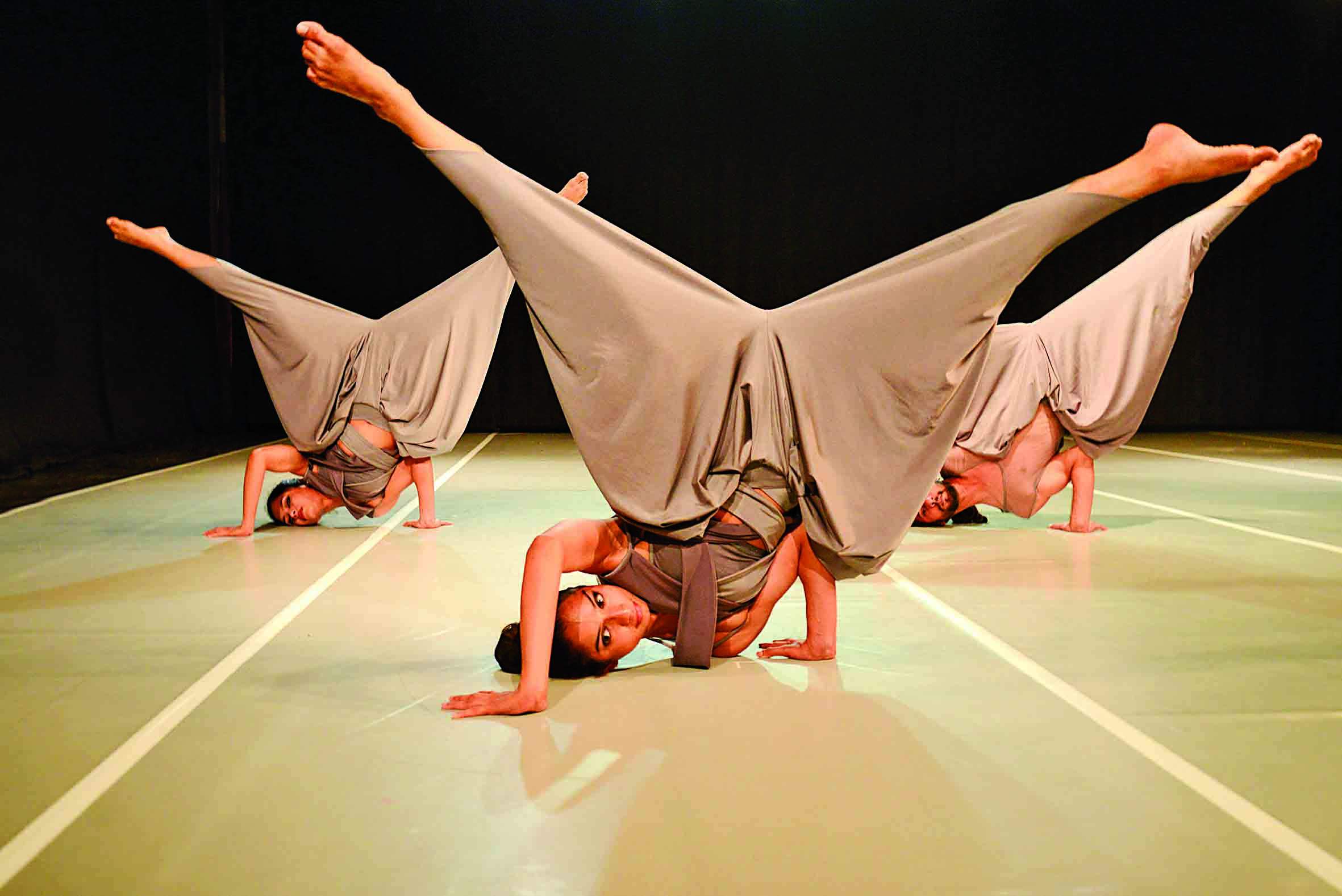 The technological, social, economic and environmental challenges we face are beyond normal, and can make one feel that the human body and even our society and infrastructure are ill-prepared to deal with these changes,” he explains. As a result, the body gets brutalised, and norms of behaviour change drastically. “This prompted me to think, what is it that makes us feel that we are living. What is the difference between us and other organisms and inanimate objects?” queries Jayachandran, adding, “Through Bhinna Vinyasa, my attempt is to provide a visceral experience that prods our latent memories, evokes sensations and hopefully, helps us to reflect a bit on our situations.”
Using luxe silk costumes, an interplay of light and shadows, and striking movements to his advantage, the choreographer paints a memorable picture, told through the concept of the atman (individual soul) and the paramatman (universal meta soul).
February 6, 7.30 pm. At Gurunanak Bhavan, Vasanth Nagar

Zawirowania Dance Theatre, Poland
THIS troupe’s performances never fail to tell a compelling story. That is one of the main elements that makes them succeed. Formed in 2005, the troupe includes Włodzimierz Kaczkowski, the director who is often also responsible for the narration. Co-founder Elwira Piorun, trained in traditional ballet, has been the artistic director and main choreographer ever since the company’s inception.
For the Attakkalari Biennial, Piorun, who has been a dancer for over 20 years, will be joined on stage by fellow choreographers and dancers Karolina Kroczak, Szymon Osinski and Tomáš Nepšinský. The performance, titled Closeness, asks the question, “When you are in a relationship, are you in love with the person or with the idea of the person.” Włodzimierz explains, “The poetic images show how relationships distort under the influence of time. A man is confronted with the image of ‘masculinity’ that a woman had created.”
To portray everyday situations, the costumes were also designed keeping the theme in mind. “The dancers are dressed in daily costumes, which are intended to underline the themes and stories presented in this show,” he says.
February 8, 8.45 pm. At Ranga Shankara, JP Nagar

GN | MC, Spain
Based in Barcelona, this ensemble, founded by Guy Nader and Maria Campos has created its own artistic language through movement — a language that lays emphasis on intense physical moves, and aims to push the body to its limits. The common factor across all the pieces is the importance of the body, as they attempt to capture the relationship between two or more bodies on stage.Founded in 2006, the group will present the piece titled, Time Takes The Time Time Takes. The relatively new production, which premiered in April 2015 at Aerowaves/Spring Forward in Barcelona, is a quintet created by Guy and Maria, with music by Miguel Martin.“This project is born out of the admiration for the rhythm and musicality that movement creates. A latent and constant rhythm that marks the passage of time. Based on a simple physical task, such as of a pendulum, we create a sequence of complex mechanisms that are done and undone by the complicity of the five performers,” offers Guy.
February 7, 7.30 pm. At Ranga Shankara, JP Nagar

1. Platform Plus A new addition to the festival gives aspiring artistes a platform to showcase their work. Catch Queen Size (an emotional and physical encounter between two male bodies in response to Section 377) by Mandeep Raikhy at 4 pm on February 10 at Alliance Française de Bangalore, and Conditions of Carriage (a look at the body in modern times through movement) by Preethi Athreya and Company at 4 pm on February 12 at Christ University.

2. Offstage Interventions As a part of Offstage Interventions, troupes perform at offbeat venues that range from foyers to metro stations. One on One, an interactive piece by Cie Ioannis Mandafounis, will be performed at the Ranga Shankara foyer (February 10, 6 pm), Chowdiah Memorial Hall (Feb 11, 6 pm) and Rangoli — Metro Arts Centre (February 12, 11 am).

3. Writing on Dance Laboratory This workshop will bring together writers from varying backgrounds to discuss dance writing in South Asia.

4. Looking to pick up a few moves yourself? The visiting dance ensembles will also hold workshops and sessions that will offer amateurs and professionals a peek into their dance styles.

5. The Facets 2017 Residency Emerging choreographers who signed up for this intense five-week training programme will present their original pieces on stage.