Rafael Nadal's first-ever Instagram live turned out to be a hilarious encounter between him and Roger Federer, with the former struggling hard with many of IGTV's features, including that of inviting another person for a video chat.

The Spanish tennis legend's aim was to interact with his fans and to update them about how he has been spending time and keeping fit under lockdown, while also expressing sadness over the grim situation worldwide, especially in Spain, one of the worst-hit countries in the world. 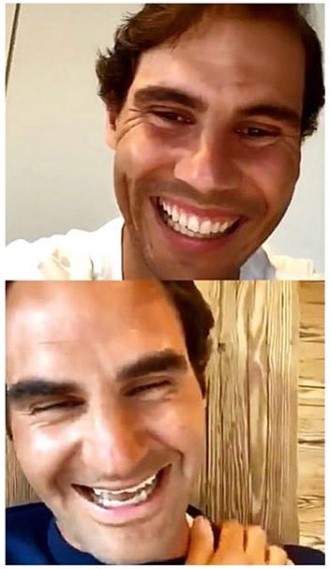 Around five minutes into his live broadcast, Roger Federer and Andy Murray start having a fun banter in the comments section. This was noticed by Nadal's wife, Xisca Perelló, who wasted no time in notifying her husband, who was, as always, so focused with the work at hand that he did not notice that his fellow competitors were vying for his attention.

Finally, after a few minutes of 'intense' figuring-out, Nadal finally managed to accept Roger's chat invitation, and what followed was a heartfelt interaction that turned out to be an absolute treat for fans. From sharing stories about how they got interested in playing tennis, to revealing how they have been spending time with their family during the lockdown period, this Fedal face-off turned out to be an absolute gem!

Watch the video below: