The story of Sartaj Singh and Ganesh Gaitonde, the Sacred Games, has captivated the Indian audience with its engaging script and powerful performances. Anjali Mathur, the third pillar of the story, adds another dimension to this crime drama. The main man, the showrunner behind Sacred Games Vikramaditya Motwane and his team have set the benchmark for what crime thrillers in India should be.

In a freewheeling chat, Vikramaditya and Anurag Kashyap (who along with Vikramaditya has directed the show), and the lead actors Nawazuddin Siddiqui and Radhika Apte talk about the show that's based on the 2006 novel of the same name by Vikram Chandra. 1- Were you aware of the book when the series was offered to you? Had you read the book earlier?

No, I wasn't aware of the book and I purposely didn't read it because my character is slightly different from that in the book. We were told not to read.

2- You have played a variety of roles in your previous films, what were your thoughts on Anjali's role and how did you approach it?

It was a very unique role because I didn't know much about the RAW agents. A lot of research had gone in and that was most interesting for me. Also shaping the character - how she would behave and be as realistic as possible - was interesting.

3- How was it working with Saif Ali Khan?

We were working on two projects together at the same time. We were shooting for a film called Bazaar and we were shooting for Sacred Games. Saif has completely different parts in both. We used to meet on different sets all the time, and the way he pulled off both roles is incredible I think. 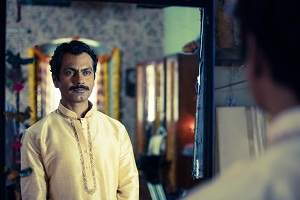 1- What were your first thoughts when you heard the script?

I thought this was a very interesting opportunity and I must take it up as an actor because I was getting a chance to create a flurry of emotions through this character.

2-You are known for playing criminal/gangster roles. How differently did you handle Ganesh Gaitonde's role?

A gangster is someone who commits crime and socially harms people. Ganesh too is not a gangster. He comes from the village and wants to become a big man and adopts illegal ways to do that. But in the treatment, I don't think it is a gangster role. I believe I am playing the role of a human being who is doing the right thing but is wrong in the eyes of other people.

3- But Gaitonde believes he is God...

There is a certain complexity in the character and because of certain incidents that he has witnessed, he believes he is God.

4- Your partnership with Anurag has been a long one...

He doesn't explain much, just before the shot he writes two pages of dialogues and hands it over. I just memorise and say my lines. This is how our relationship is! 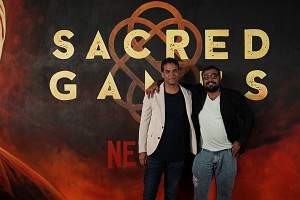 1- What's the backstory of the Sacred Games.

Netflix wanted to come to India and they acquired the rights to Sacred Games. I was in Los Angeles on a family vacation when I got a call to meet the guys at Netflix. We really hit it off well and three months later I was back in their office. They asked me if I had read Sacred Games. I said no, and they asked me to read it in a week and I had to read this 1,000-page book. We spoke about doing the show and I met Vikram Chandra for the first time. Two months later they were in Mumbai, and we were hiring writers.

2- What were your first thoughts when you read it?

What starts off with a small premise goes onto becoming an epic book about politics, religion, crime, faith, partition, India and Pakistan. I really liked the book.

3- Why were you so keen that Anurag had to be the other director?

He had to be. Right from the beginning when we started talking about the entire show, he was the first person who came to my mind. I am not typecasting him but nobody does crime (genre) better than him in the country right now. He does noir really well, I do sad really well (laughs). For me it was a no-brainer. We had two parallel stories getting shot at the same time, so we decided saying you direct one and I will direct the other. I trusted him enough and he trusted me enough, so we didn't worry much about it and dived into it.

4- Did you also think that Anurag would get the best of Nawaz in this series?

Absolutely! There was no doubt!

It was fantastic working with him, he is a good actor and is dedicated. He wants to do take after take and wants to better himself. As he gets older, there's a man-child who gets mature, he is great that way.

6- It is said that both of you (Vikramaditya and Anurag) are like a couple when it comes to working but off work you fight a lot...

Yeah we fight, but I don't think our fights have been that serious enough that these go on beyond one day... If we have a fight and have a point of view, we say it. But also the fact that we actually listen to each other when we fight is the best part! 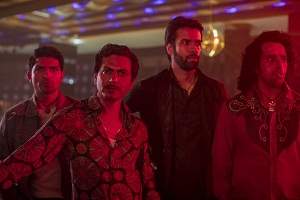 1- What prompted you to take up this project?

I had read the book long time back. I was around even when Vikram (Chandra) was researching this book. So I quite like the book. My association with it has been for long but I came onto the show last. I was shooting Mukkabaaz. I came back from the shoot and Vikram (Motwane) said he wanted to talk to me. I got to know about the show and I jumped into it!

I love crime. There is so much more you can explore in crime. It is never ending. If crime was all done then there would be no summer reading. There's something intriguing about crime.

3- Why do you get drawn to this genre?

I don't know, maybe I am messed up in my head. Rebellious characters make the stories interesting for me.

4- How has your relationship with Nawaz evolved?

I have been working with Nawaz since my third film as a writer. We have both become very easy with each other, there's just so much trust. For me, Nawaz is like clay, like copper, you can mould him, you can take him anywhere. Nawaz is the guy who is invisible to the naked eye but somehow when he comes on camera he just fills it. We don't talk, Nawaz doesn't talk much. I talk a lot, but only non-work things. Other than that when we are working we are very silent.

5- You watched each others' episodes on the edit table, was there any feedback or changes?

During the first episode's edit it was like - I would take out a scene and Vikram would put it back... I kept doing that and then I had to tell myself he (Vikramaditya) is the showrunner and he knows where the show is heading. Eventually the scenes stayed (laughs), he knows the whole arc and I am in the moment. But he also knows where it is going which I didn't know.

6- It is said that both of you (Vikramaditya and Anurag) fight a lot.

We haven't fought beyond one day, our fights have a build up, we have a lot of silence in between (smiles), 15 days to a month of silence, and then suddenly we fight.