Over two years after 13 Reasons Why premiered on Netflix, the streaming platform has decided to edit out a disturbing suicide scene from Season 1 of the teen drama series.

According to Netflix, in a statement released to Twitter on Monday, they made the decision after consulting a medical expert, and they made the edit with full agreement and support from the show's creator, Brian Yorkey. 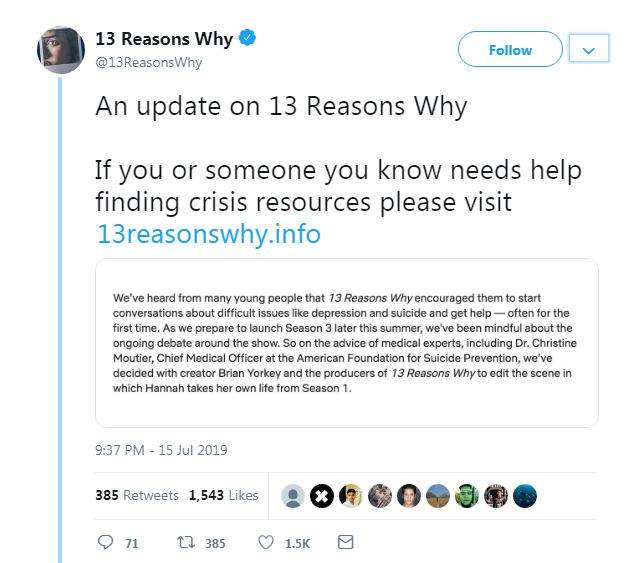 "We’ve heard from many young people that 13 Reasons Why encouraged them to start conversations about difficult issues like depression and suicide and get help — often for the first time. As we prepare to launch Season 3 later this summer, we’ve been mindful about the ongoing debate around the show," Netflix said in their statement.

"So on the advice of medical experts, including Dr Christine Moutier, chief medical officer at the American Foundation for Suicide Prevention, we’ve decided with creator Brian Yorkey and the producers to edit the scene in which Hannah takes her own life from Season 1," they explained.

The original, nearly three-minute-long scene — which is no longer available on Netflix — aired midway through the season one finale. The episode opened with a warning to viewers that the instalment "may not be suitable for younger audiences" and included "graphic depictions of violence and suicide."

The new scene, has now been updated on the Netflix site, now features Hannah looking at herself in the mirror before cutting to see her parents' reaction to her suicide. There is no longer any depiction of the character taking a razor blade to her wrists and the immediate aftermath. Sources say Netflix will also monitor and issue take-downs for any pirated clips that feature the original, unedited scene.