Continuing its rich legacy of Everest exploration with unparalleled access from renowned explorers, scientists, photographers and filmmakers, National Geographic once again ventures to the peak giving viewers a chance to deep dive into the mountain’s unique history through its upcoming documentary titled Expedition Everest. Scheduled to premiere on 18th July at 10 PM on National Geographic, the documentary showcases the journey of a team of international scientists, climbers and storytellers, to the top of the world’s highest peak to conduct the most comprehensive, single scientific expedition in Mount Everest history. The one-hour special, narrated by actor Tate Donovan captures trailblazing climate research that is critical to understanding changes facing the mountain and its glaciers and shines a light on the threats these changes pose to the communities that live downstream.

National Geographic explorer Tom Matthews was a co-lead of the meteorology team on the National Geographic and Rolex Perpetual Planet Everest Expedition and was on the high-altitude climbing team that installed the world’s highest weather stations. A climate scientist and lecturer at Loughborough University, United Kingdom, with an interest in glacier-climate interactions, Matthews also researches extreme weather, from storms to heatwaves, and is working on improving public communication of climate change.

1. What was the major objective of putting up a Climate Laboratory on Everest?

While not quite a full climate laboratory, our team installed a network of five weather stations on the National Geographic and Rolex Perpetual Planet Everest Expedition. Everest provides a unique platform for measuring the weather across the full altitudinal range of Himalayan glaciers. We wanted to establish what the current climate is like across this transect – to lay a baseline – and to understand how sensitive the region’s glaciers may be to climate warming. Because hundreds of millions of people live downstream of the glaciers, this objective carried a heavyweight. But there were also more localized benefits to installing the weather stations. Their data enables us to better understand fluctuations in the high-altitude winds – which influence weather far behind the Himalaya – and to improve local weather forecasts. Bad weather contributes to many of the deaths on Everest, and we may be able to reduce this risk with the data from the weather stations.

2. Having conducted the most comprehensive scientific expedition in the field with leading international scientists, tell us, what are the major changes that mountains and glaciers are facing today? How is climate change affecting Mt Everest and the rest of the Himalayas?

Other research has already shown that glaciers in the Himalaya are joining others worldwide in retreating as the climate warms. This retreat is an enormous concern because the glaciers act as a reliable source of freshwater in river systems supplying hundreds of millions of people downstream. You can immediately see evidence of this retreat for the mighty Khumbu Glacier, which drains Everest’s southern and western flanks. Like a high-water mark left on the side of a bathtub after the water has drained, you can see how high the glacier use to reach up the mountain sides. The Khumbu has thinned dramatically as temperatures have risen. In general, we know that temperatures are rising in mountain ranges worldwide. The Khumbu’s ongoing retreat tells us that the climate in this part of the central Himalaya must also have changed, but we really don’t know by how much. Glaciers lag behind the climate, and we lack sufficient measurements of the weather (e.g. temperature and snowfall) from the great heights of Himalayan glaciers. This expedition helps change that. We are now gathering data from weather stations spanning almost the full altitudinal range of Himalayan glaciers. Work done by the ice core team will enable these modern measurements to be placed into a longer-term context. Combined, these approaches help us take the pulse of this special part of our planet. 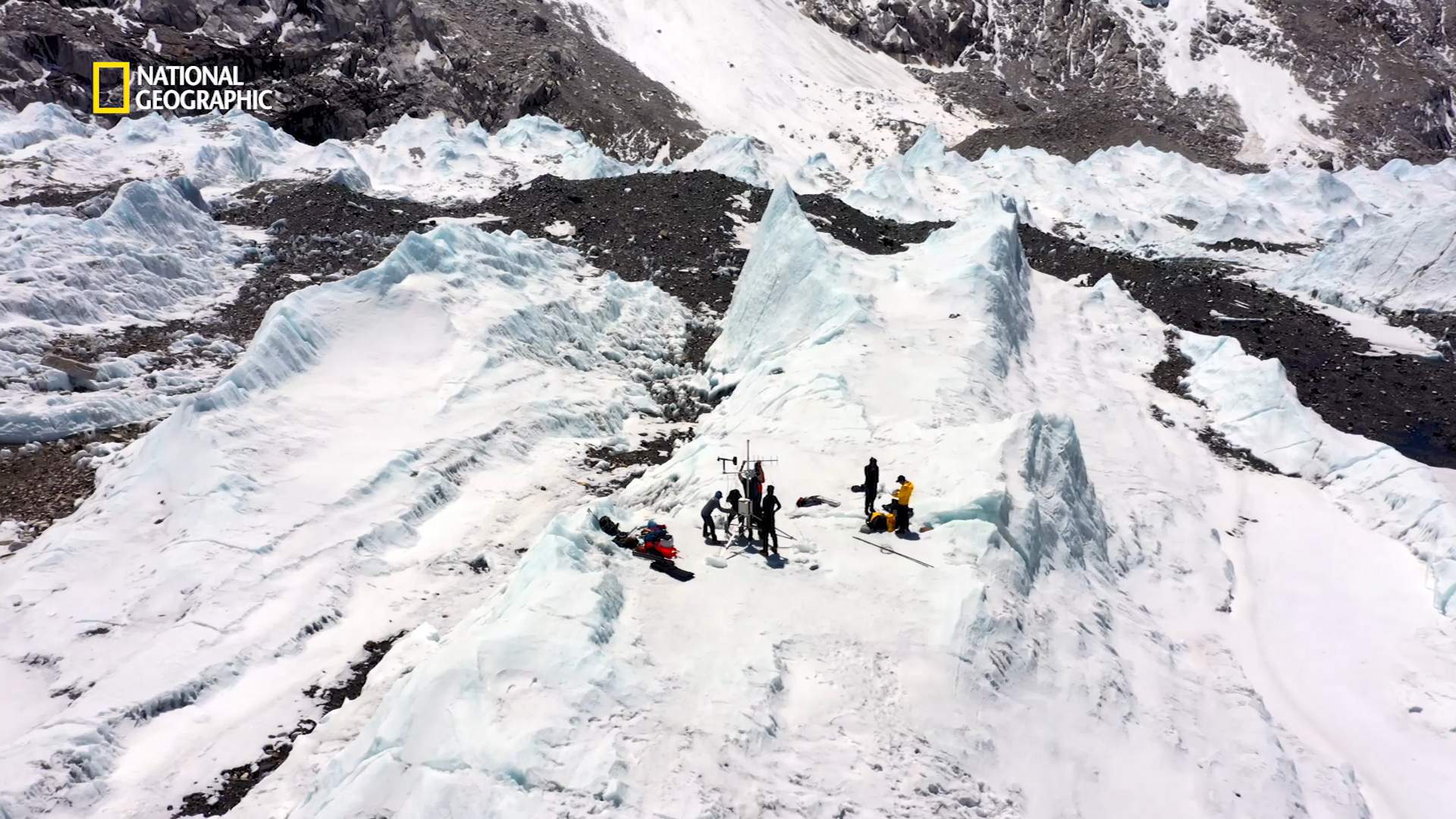 3. How does this impact and threat of climate change trickle down to the communities that live downstream? How connected do you manage to stay with many of these small, remote settlements?

The threats from climate change to communities downstream are many. Some of these are immediate and connected to the changes happening to the glaciers (e.g. enhanced risk of flooding in the short term; concerns about water security in the longer term). Others are further downstream and not directly connected to the changes occurring in the mountains. For example, episodes of extreme (and deadly) heat are expected to intensify worldwide as the climate warms, and the Indo-Gangetic Plain is close to the global epicenter of where this challenge will play out. We had about half of our science team comprised of Nepalese researchers. Their expertise will maximize the opportunity for the expedition’s research to help local communities adapt to the more immediate downstream impacts of climate change.

4. Tell us more about your climb up to the summit. What were the major challenges you faced and how well equipped were you to handle them?

We had a world-class Sherpa team and the expedition was led by the very best in their fields. Paul Mayweski and Peter Athans spearheaded the science and climbing teams, and their experience is second to none. In short, we were well prepared for the demands of the climb – extreme cold (-25C), little oxygen (about 1/3 rd of sea-level), rapidly changing weather, and the technical demands of climbing through the Khumbu Ice Fall. In 2019 we also had to contend with an unusually crowded mountain. Ultimately this was the biggest challenge to the high-altitude science. Ironically, it was the weather that conspired to create these crowds. With so few days of “good” weather for summit climbing, many mountaineers were funneled into a narrow window of time.

5. Could you share the most memorable and breathtaking moments you got to experience from this expedition?

Being at the Balcony was very memorable. So too was being in the company of the Sherpa. They are remarkable in so many ways – from their incredible physical ability to their kindness and willingness to help. But perhaps the memory that will persist longer than most is the overwhelming power of the environment. I lost track of how many times the silence was broken by avalanches cascading from the towering giants around us – Nuptse, Lhotse and Everest. They have a way of reminding you how small and irrelevant you are – it’s extremely humbling. 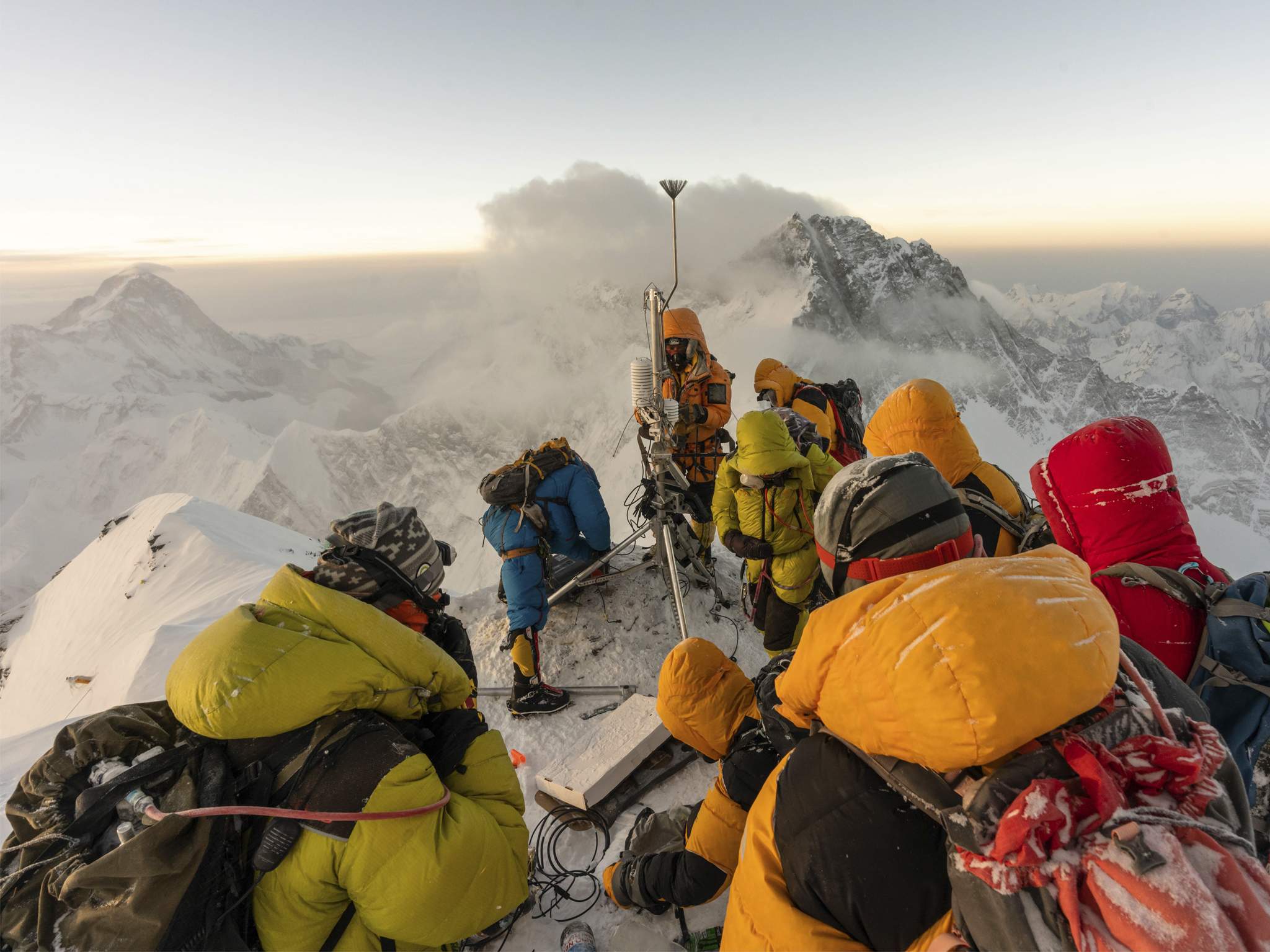 6. How is the experience of being a part of Nat Geo’s film, Expedition Everest?

It’s a real privilege. Climate change is – to a scientist like me – the issue of our time. It cannot receive too much attention. The urgency to address the problem cannot be overstated. For those reasons, any opportunity to communicate climate change to the public is special and must be seized. National Geographic is arguably the best storyteller in the world, and Everest symbolizes so much of what climate change is about. To be part of a film that brings those elements together – to tell the world about this element of climate change – was very special. I also left the field with nothing but enormous respect for the media teams. They worked unbelievably hard through bad weather, sickness, and fatigue, to do their job.

7. How much of the research and findings at the Climate Laboratory can prospectively directly influence India’s defence strategies against the effects of climate change in the region?

Information from expeditions like ours can play a critical role in informing decision-makers about the challenges ahead. For example, the data we are collecting from the weather stations will help us understand how sensitive the glaciers in the region are to climate warming.

EXPEDITION EVEREST will premiere on National Geographic on Saturday, 18th July 2020 at 10 pm.