Ahead of Season 11, here's a look at the five unforgettable deals on Shark Tank

Shark Tank the world’s longest-running business reality show for budding entrepreneurs is back with Season 11. The new season is streaming on Voot Select. But the television premiere will be on May 18 on Colors Infinity.

However, before you tune in to the new season, here's a look at five deals on Shark Tank that made the sharks richer. Scrub Daddy from Episode 7 on Season 4
Aaron Krause pitched his unique product – Scrub Daddy as the most hi-tech scrubbing tool in the world. The product is made of a polymer which changes texture - soft in hot water, hard in cold water. Lori Greiner was mighty impressed and invested $200,000 for a 25% stake in the company. Aaron’s invention supported by Lori’s guidance made Scrub Daddy highly successful with the company boasting of having sales figures of over $107 Million USD in 2019!

Tipsy Elves from Episode 12 on Season 5
Tipsy Elves’ Evan Mendelsohn and Nick Morton brought the party to Shark Tank’s fifth season with holiday-themed high-quality apparels embodied with pictures of the world’s most loved cartoons. The quirky and fashionable apparels got the sharks smiling and Robert Herjavec’s investment of a $100,000 for a 10% stake. the company's revenues had been projected as $12 million. In 2018, the website had reportedly done over $70 million in sales and sold over two million products since its launch making it one of the most successful products ever witnessed on Shark Tank. 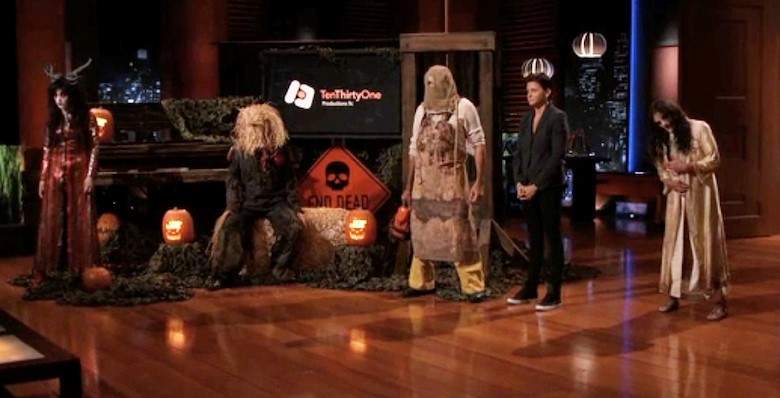 Ten Thirty-One Productions from Episode 6 on Season 5
Melissa Carbone started Ten Thirty-One Productions back in 2009 which quickly became known in the Los Angeles area for staging thrilling haunted hayrides each fall. the frightening ride takes visitors through Griffith Park using local actors as ghosts, witches, and scary clowns. Mark Cuban struck a deal with them providing $2 million for a 20% stake in the company. The entertainment company behind delightfully spooky haunted houses has only grown since the show, posting sales in the millions.

GrooveBook from Episode 13 on Season 5
Owners of a successful commercial print shop, Brian and Julie Whiteman were looking to create a subscription service for the photo books they produced. Customers would upload up to 100 pictures a month from their mobile devices and have their memories preserved in a custom photo book. Mark Cuban and Kevin O’Leary invested $150,000 in exchange for 80% licensing profits. In the years to come, Groovebook gained a huge fan base and was a trend amongst the audience. The company was acquired by Shutterfly Inc in 2014 for $14.5 million earning a huge profit to Mark and Kevin.

Lollacup (Now Lollaland) from Episode 12 on Season 3
A BPA and phthalate-free children’s drinking cup featuring a flexible straw that allows toddlers to drink easily and effectively – Lollacup was shown to the sharks by the husband-wife team of Mark and Hanna Lim. They explained that the cup was a better alternative to traditional sippy cups which damage kids’ teeth. Mark Cuban and Croatia-born, Canadian entrepreneur Robert Herjavec invested $100,000 for 40% equity in the company. With the funds and guidance of these maestros, the product since then has converted more than $3 Million USD in sales and is a huge hit.