Schitt's Creek, the little Canadian show about a fish-out-of-water family, made history at Sunday's Emmy Awards with a comedy awards sweep, something even TV greats including Frasier and Modern Family failed to achieve. 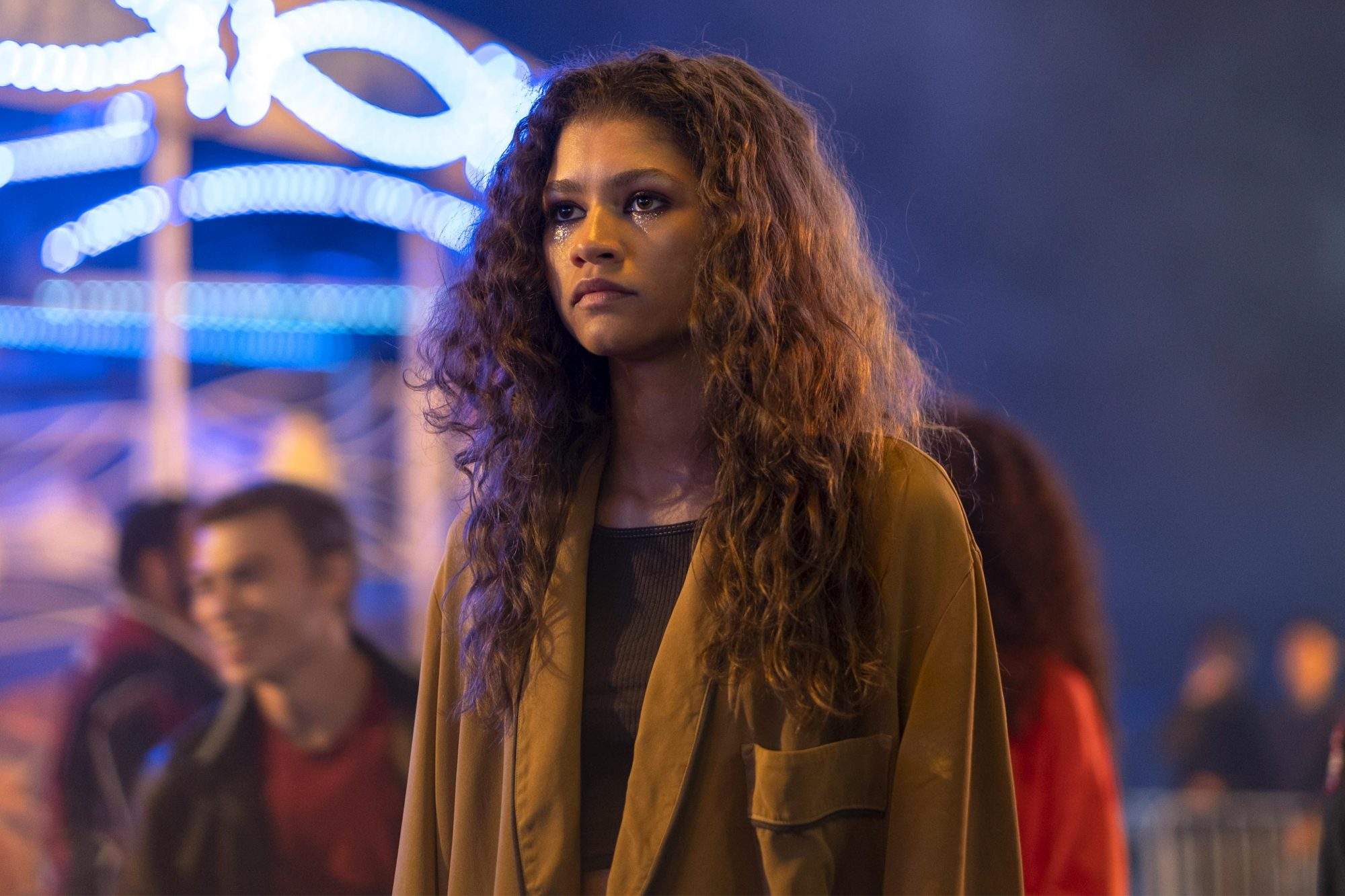 Zendaya, 24, became the youngest lead drama actress winner for her role as a troubled teenager in Euphoria. "I know this seems like a really weird time to be celebrating," Zendaya said. "But I just want to say there is hope in the young people out there. I know our TV show doesn't always feel like a great example of that," but young people out there are "doing the work."

Succession, a family power struggle over a media empire, was honoured as best drama series, and creator Jesse Armstrong used the opportunity to offer "unthanks," including to President Donald Trump for what Armstrong called his "crummy" handling of the pandemic. Succession star Jeremy Strong won the drama actor trophy for his role as a potential heir to the throne.

The virtual ceremony, with a hard-working Jimmy Kimmel as host, went smoothly despite producers' concerns that the plan to link 100-plus nominees remotely could result in glitches.

Although the rise of streaming services including Disney+ and Apple TV+ dominated the TV landscape, it was Emmy stalwart HBO that stole the show, with winners including "Succession" and Watchmen making up for its now-departed awards giant Game of Thrones. ViacomCBS-owned Pop TV and its quirky comedy also proved unbeatable. 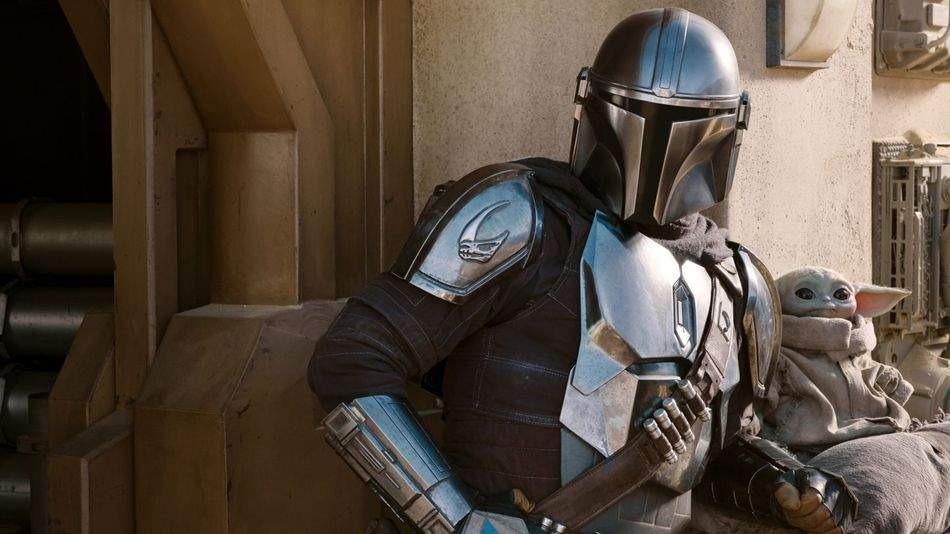 Disney's Star Wars-derived The Mandalorian had to settle for technical awards, falling short in the best drama contest.

The awards for Pop TV's Schitt's Creek included best comedy series and trophies for its stars, including Catherine O'Hara and father-son Eugene and Daniel Levy. "It is absolutely incredible. I think my dad said it best earlier this evening: it's a dream you don't want to wake up from, to be honest. What an absolutely unbelievable way to end our series," Daniel Levy said backstage. His character's comfortable pansexuality led to storylines that Levy called personally "cathartic." In his acceptance speech, he said the sitcom was about "the transformational effects of love and acceptance, and this is something we need more now than ever before," encouraging people to register and vote to achieve that goal.

Other winners, including Watchmen star Regina King, made a point that the Nov. 3 general election was near. 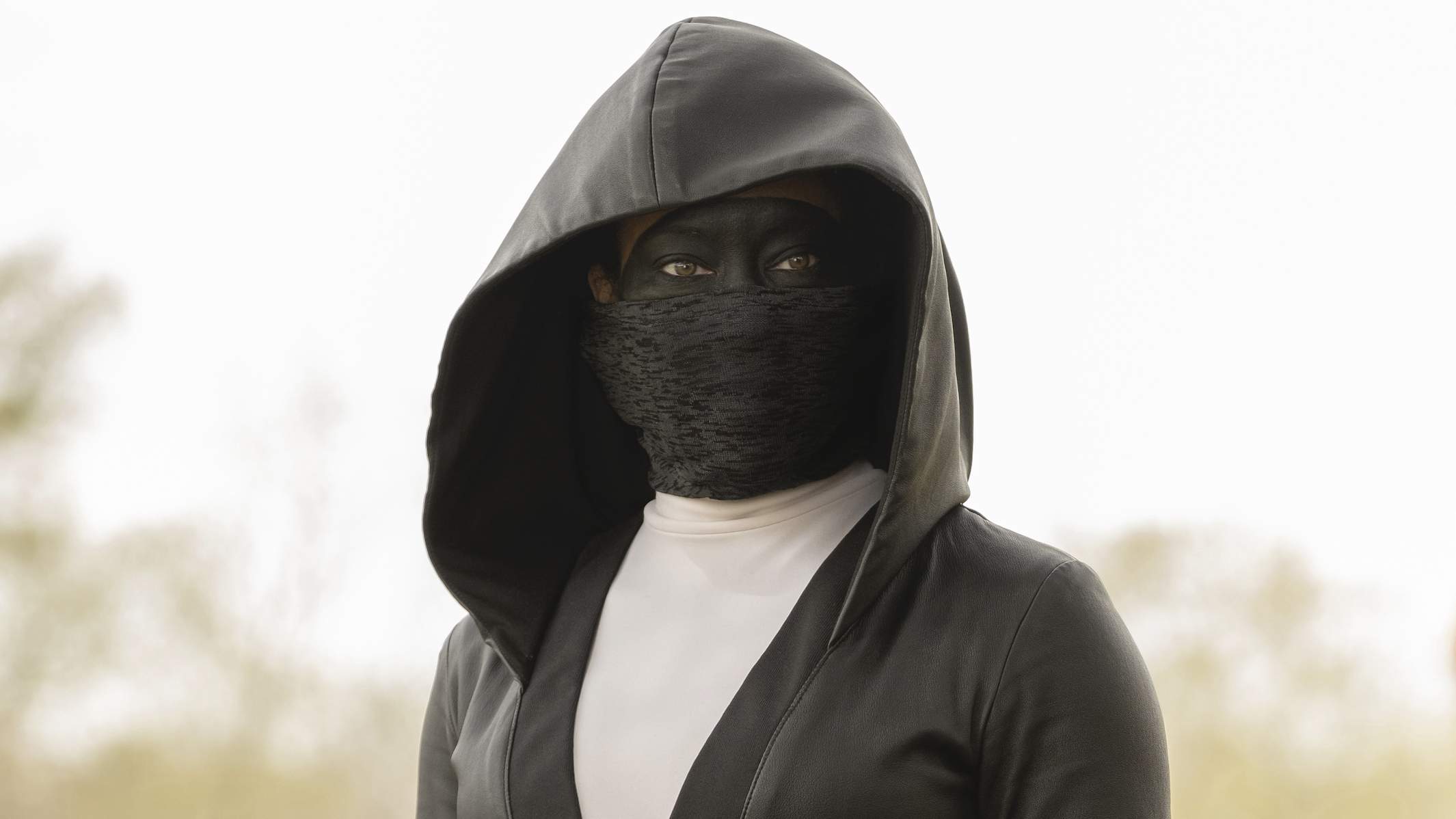 All the winners accepted their awards virtually in the pandemic-safe ceremony, including O'Hara, but she wasn't alone.

"Though these are the strangest of days, may you have as much joy being holed up in a room or two with your family as I had with my dear Roses," O'Hara said, surrounded in a decorated room by mask-wearing co-stars who play the Rose family members. Levy called it "ironical that the straightest role I ever played lands me an Emmy for a comedy performance. I have to seriously question what I've been doing" for the past 50 years.

Moments later, his son won the award for comedy writing for Schitt's Creek episode, then shared a directing award and captured the supporting actor comedy trophy. The supporting actress trophy went to his co-star Annie Murphy.

Daniel Levy thanked his father and O'Hara for teaching an extended "master class" in comedy. The show's sweep came for its much-acclaimed final season.

References to coronavirus were an ongoing part of the ceremony, with essential workers — including a teacher and a UPS deliveryman — presenting awards and Jason Sudeikis ostensibly getting a COVID-19 test onstage. 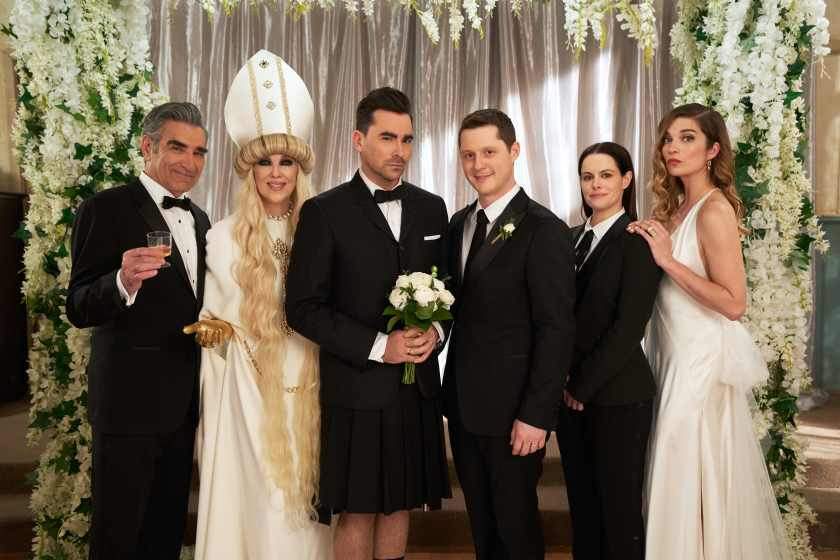 In a year with a record number of Black nominees, 35, there was a notable lack of diversity in the show's early going. With Schitt's Creek gobbling up comedy awards, that left Insecure and creator Issa Rae empty-handed Sunday.

That was also true of Ramy Youssef, creator-star of the semi-autobiographical comedy Ramy, about a young Muslim American's love and religious life. Yousef tweeted a video of a hazmat suit-wearing person clutching an Emmy and waving goodbye after he lost the comedy actor category.

There was a sign of change with the drama awards, which came in the latter part of the ceremony.

The powerful series Watchmen, a graphic novel-adaptation steeped in racial pain, was voted best-limited series and King won lead actress for her work on the HBO show. She was showered by confetti as she accepted in an armchair, wearing a T-shirt that honoured police shooting victim Breonna Taylor.

"This is so freaking weird," said King, who regained her composure and called on viewers to vote and, backstage, explained why she wore the message shirt. "The cops still haven't been held accountable," she said. "She represents just decades, hundreds of years of violence against Black bodies. Wearing Breonna's likeness and representing her and her family and the stories that we were exploring, presenting and holding a mirror up to on 'Watchmen,' it felt appropriate to represent with Breonna Taylor." 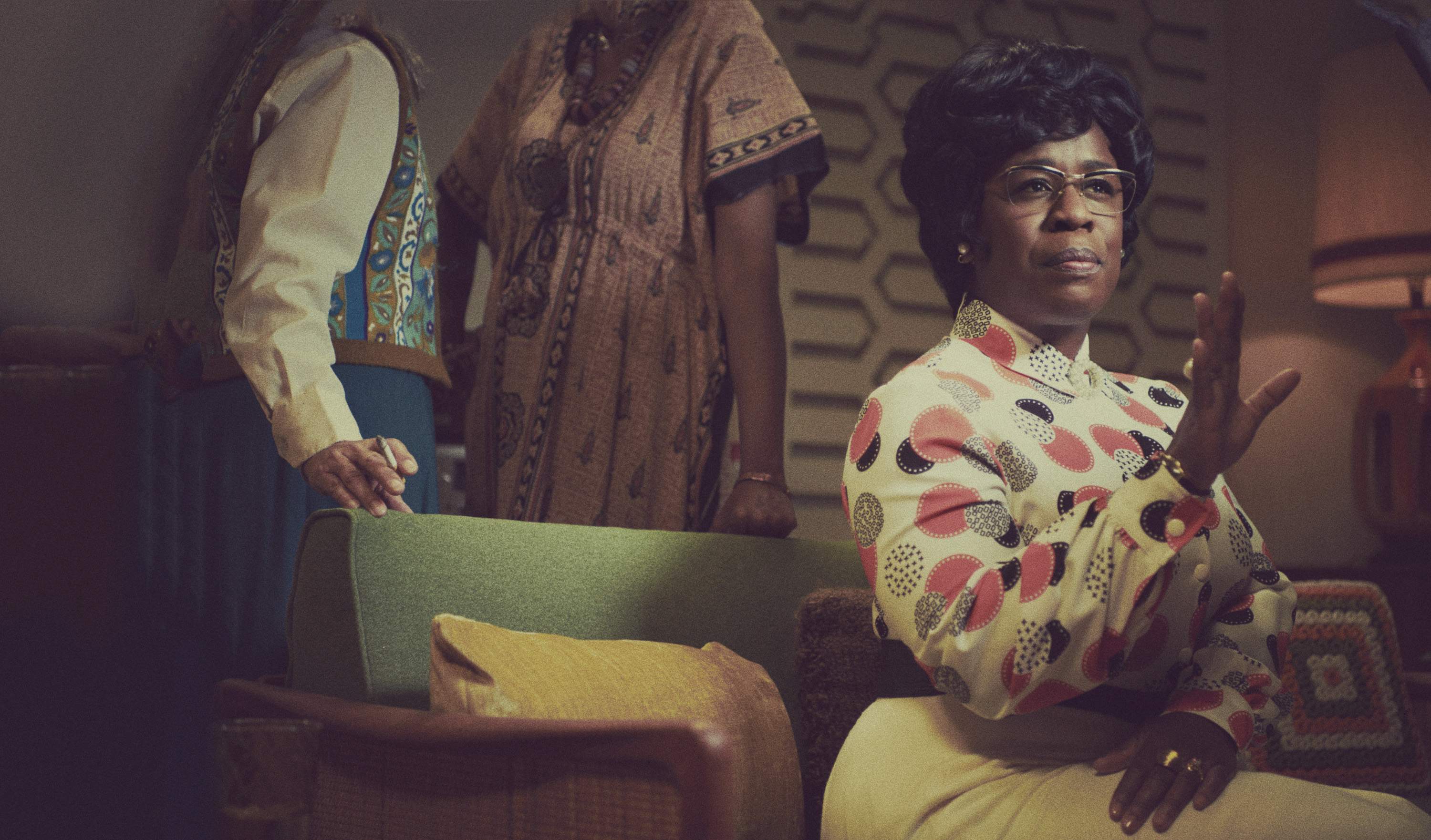 Her co-star, Yahya Abdul-Mateen II, won the Emmy for best supporting actor in a limited series. Uzo Aduba won the counterpart actress award for her portrayal of Shirley Chisholm in Mrs. America.

Anthony Anderson, a nominee for Black-ish, came on stage to make his disappointment vigorously known, saying the awards should have been "Howard University homecoming Black.""This isn't what it should have been. ... But Black stories, Black performances and Black Lives Matter," he said, urging Kimmel to shout with him. 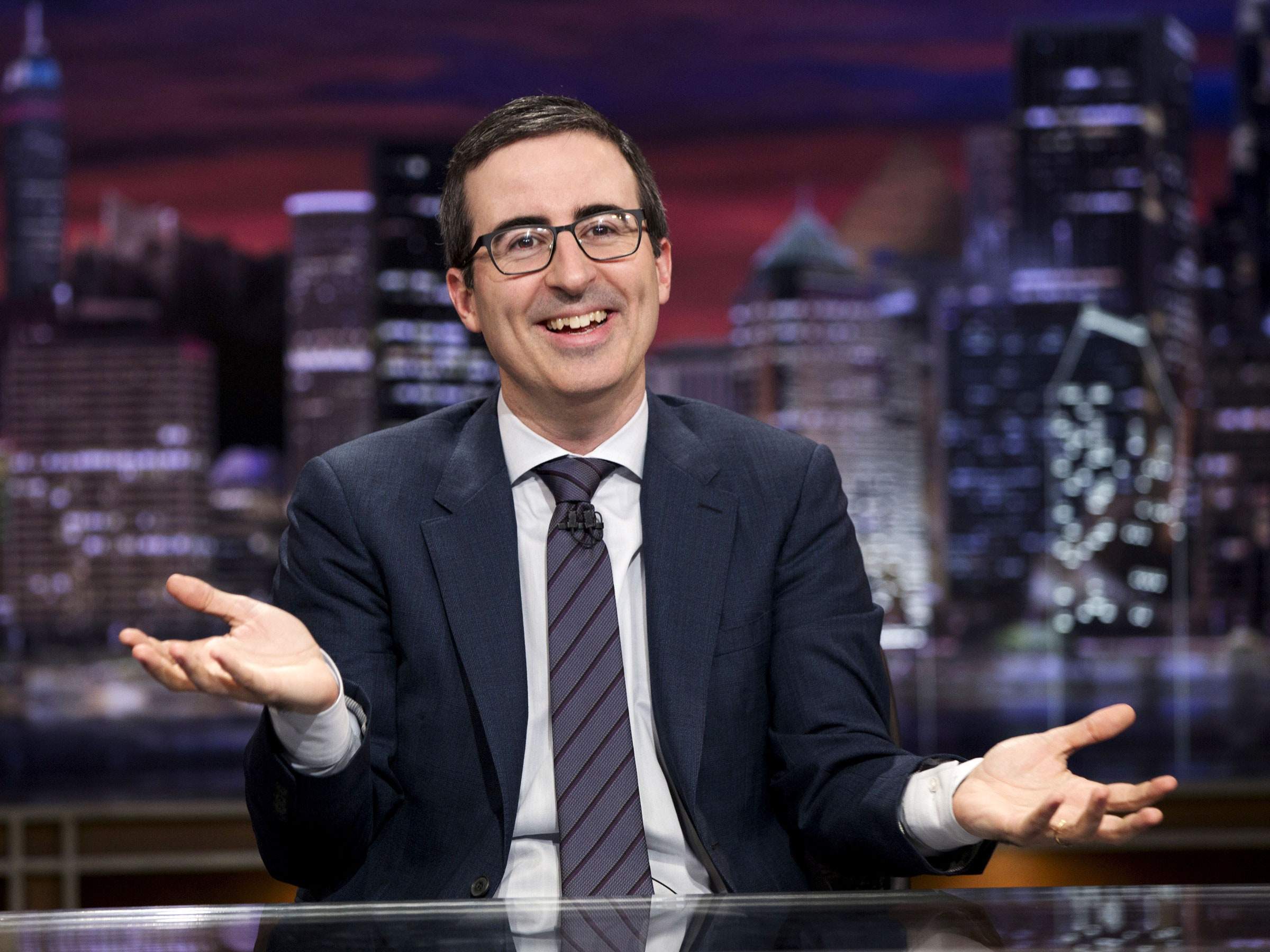 Last Week Tonight with John Oliver was again honoured as best variety-talk series, with David Letterman announcing the award after being abandoned roadside by an annoyed ride-share driver.  Oliver joined the ranks of winners calling for Americans to vote, as did Mark Ruffalo, who won the limited series acting trophy for "I Know This Much is True."

Kimmel opened the show with a monologue that appeared to be defiantly delivered in front of a packed, cheering theatre — until it was revealed clips were played from past Emmy shows. "Of course I'm here all alone. Of course, we don't have an audience," he said. "This isn't a MAGA rally. It's the Emmys."

A minor gaffe marred Saturday's virtual creative arts Emmys for technical and other honours, when Jason Bateman's name was announced for a guest acting award that belonged to Ron Cephas Jones of This Is Us. Other guest acting honours went to Eddie Murphy and Maya Rudolph for Saturday Night Live and Cherry Jones for Succession.

Bateman was one of the few people on hand at the Staples Center for Sunday's show, sitting in the audience during Kimmel's opening monologue. The actor sat stone-faced amid a collection of cardboard cutouts, trading jokes with Kimmel after the host pointed out he was there.

In the cumulative awards handed out Sunday and at the creative arts events, HBO was the leader with 30 trophies, followed by Netflix with 21, Pop TV with 10 and Disney+ and NBC with eight each.