Superheroes and innovators — the two may seem vastly different. But, in many ways, the origin stories of Earth’s mightiest heroes often parallel the narratives of history’s greatest innovations. After all, like superheroes, innovators challenge status quo — driving transformation and effecting positive change. And more often than not, they draw out the critics.

But more importantly, if the ongoing pop-culture phenomenon (we’re looking at you, Hollywood) has taught us one thing — it is that the superheroes and innovators always have great background stories and even better plot twists. And everyone loves a good tale! Sibling and designer duo, Shantanu and Nikhil Mehra fall squarely into this category.

When the two first launched their eponymous label in 2000, designers were gearing up for the country’s first-ever fashion week, and the idea of Indian couture greatly differed from its present-day definition. The scene was then primarily dominated by costume designers like Manish Malhotra and Neeta Lulla — who brought heavy embroidery, ornate embellishments and bling to the big screen. And its cascading effect informed the colourful and chic salwar suits and heavy OTT lehengas that made their way across retail stores and wardrobes. “It was a time when the India that was portrayed to the world was a crucible of culture, colours, embroidery and every form of maximalism. Fashion critics overseas had, thus far, only witnessed the handcrafted and embroidered aspect of Indian fashion. And we did not want to
be a part of that narrative,” says one half of the Shantanu & Nikhil brand, Shantanu Mehra, emphasising that tailoring, fusion of fabrics and experimental silhouettes have always been at the core of the brand’s design philosophy.

Twenty in 2020
This creed has indeed served the duo well. They started nearly two decades ago, when occasion wear was still an unfamiliar concept, and have played a pioneering role in shaping this segment within the Indian fashion industry. “The idea was never to make money or be recognised immediately. The goal was to tell stories that would become the brand and create a legacy that would yield profits,” shares Shantanu, taking a look back at the 20 years of their journey that has seen them dress everyone from Serena Williams and Stephen Fleming to Kareena Kapoor Khan and even the late Sushant Singh Rajput.
The year 2020 was meant to be one of celebration — a momentary breather when the Delhi-based brothers relived the high points of their brand and introduced to patrons their road map for the next decade. “We had broken down the year into three narratives. The first was the unveiling of our new bridge-to-luxury brand S&N by Shantanu and Nikhil on Day 1 of the FDCI-organised India Fashion Week in March, followed by the opening of our two flagship stores in Delhi.” But as the threat of the global pandemic escalated, fashion weeks across the world were indefinitely postponed, and storefronts shuttered.

If the pandemic had not disrupted your 20th-year celebrations, how would the
year have panned out?

Shantanu: Apart from the launch of the new brand, we had a couple of other things on the cards. There was an off-site couture show planned. It was supposed to be a two-day showcase that took place on a train — depicting the journey of the brand. We had a few stops in mind, where patrons would embark and disembark. We had also planned the launch of our signature scent for September, but that might be moved to October. 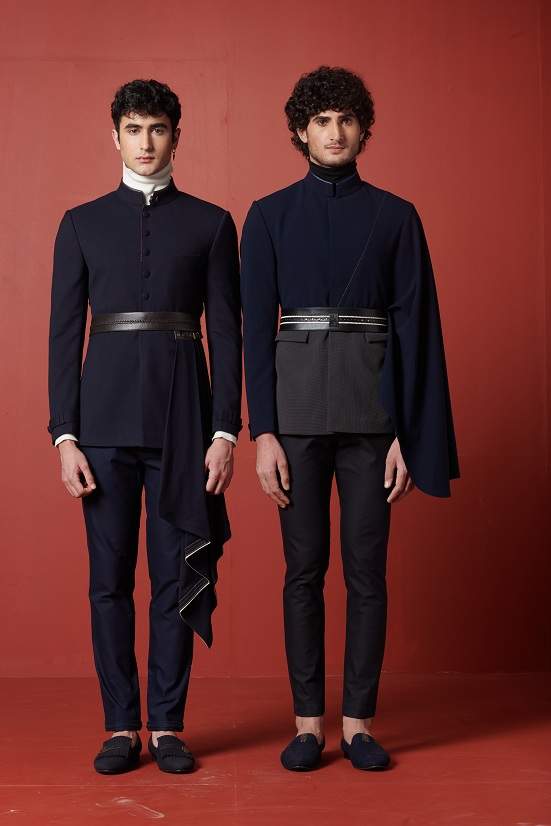 Going live in...
In response, the brand pivoted their strategy. S&N by Shantanu and Nikhil was quick to tease their ready-to-wear iterations on social media, all the while dropping hints of the launch of an exclusive digital site — which went live earlier this week. The deftness of the switch was mildly expected but surprising nonetheless. “Nikhil and I approach each collection with childlike enthusiasm. We think of each project as a new start. With S&N, it is the start of a new journey indeed. It took us back to when we debuted our label at the then Lakmé India Fashion Week,” he recalls, saying, “India’s fashion critics and journalists did not understand our design language and had almost written us off. Ever since I have always believed that it is important to treat everything you do...every collection as your last.”

■ A book/documentary on fashion everyone ought to read: Honestly, I am detoxing on reading or watching anything related to fashion. That way, we make sure, even inadvertently, we don’t take any inspiration from other brands. Currently, I am taking Google
classes on internet marketing and reading a book by Harvard Business Review on how to manage people

■ Your go-to playlist when you are working: I don’t listen to music when I work (laughs). In fact, I have never been much of a music person. But if I’m ever listening to music, I prefer Indian music from the ’70s and ’80s. I love RD Burman.

■ Another designer you love wearing: I am an athleisure freak. I think my style is banker chic and one of my favourite brands is Off-White. The new prêt range under S&N label, titled The March, picks up on this nostalgia and patriotic chic as seen in earlier couture collections like The Regiment, Independence and Recruit. In tow, elements like medallions, badges, buttons and other detailing dominate the line. “They are important elements of our anti-trend storytelling. In our couture lines, each of the medallions found resonances in a particular era of Indian history that inspired the respective collections. They are representative of the authority and control that Indians were gaining, post-independence.”

Yours to choose
While the ready-to-wear label converges with the designers’ vision to expand their brand to the new-age, self-aware Indian millennial — the launch, in addition to their online retail space, marks the bespoke brand’s first major move towards ‘affordable luxury’ since Aditya Birla Fashion & Retail Limited acquired 51 per cent of their stake in 2019. “This strategic joint venture is the first step towards democratising couture. It also gives us an opportunity to incubate ideas that will take the Indian fashion narrative to a global audience.”

What’s the one thing about Shantanu you admire?

Nikhil: Shantanu and I have realised that our goal is one, but we are completely different. When I come up with an idea, I come from a creative space. What I admire is…he’s very calm, so he always analyses what I say and comes back to me with his verdict. I’ve started looking forward to his feedback. In many ways, I miss my older brother. I’ve always had a relationship with him as a colleague. But every time we have a successful show, we really come together and hang out as friends over comforting bowls of Chinese food.

What are your thoughts on the athleisure and loungewear trend? Do you think it is in for the
long haul?

Nikhil: During these unsettling times, don’t be driven by trends. Choose and wear what you like, and wear it confidently. Also do not compromise on your personal style because it’s a time when you have to feel good and stand confident and empowered in what you do and in who you are.

Matrix revolutions
Among the first of these ideas to be put into action is the label’s reliance on big data. A critical area changing the retail game — big data or predictive analytics  — allows designers and labels to collect market data on previous fashion lines. Machine learning systems can also identify fashion trends and predict customer preferences down to variables like colours, silhouettes and even sizes. “Fashion has always been a distant adopter of digitisation because there is an emotional parameter involved. But, technology has become intrinsic to our everyday lives.”

True to their calling of being ‘Indian fashion’s disruptive innovators’, Shantanu & Nikhil are among the first Indian designers integrating AI systems across brand parameters to create a digital shopping experience — virtual stylist et al — that is on par with a trip to one of their brick and mortar stores. “We will continue expanding our storefronts because as a brand we love experiential couture,” says Shantanu, agreeing that in an industry as dynamic as fashion — if you aren’t on the top of your game, one night you are the toast of the town and the next you might just be toast!