Pandemic has you re-thinking your bijoux picks? Alankaara’s fossilised concept jewellery can help

Modernist designers are scrambling quite a bit to locate the next big thing in jewellery, as fashion moves towards its most mindful era. And when it comes to experimental bling, tastemakers of the world have cast a wide net. And Amrita Giriraj’s artisanal fossilized jewellery label Alankaara is just the sort of thing they’re looking for. The premise of this niche line is self-sustaining and simplistic, the designer essentially built a business model around botanical jewellery, that is aimed at nurturing local artisan communities since the fossilisation process is easily understood by the craftsmen.

“The premise for this sustainable, artisan-first initiative came to me when I was studying at the Srishti Institute of Art, Design and Technology; I was working on a social impact project with the Kanyakumari artisans, specifically a cluster of seashell craftsmen who were affected quite acutely by the 2004 Tsunami. The funding stopped soon but I had stumbled upon fossilisation during this time. It was a process that could be used to make jewellery, lifestyle objects etc. Soon after, I started my own brand with a focus on fossilised, plant-based jewellery,” Giriraj shares.

Alankaraa’s botanical-oriented designs are astoundingly adaptable; be it the edible globe amaranth,  or cherry blossoms, or the fiery zinnia found in the American South West, the label uses an exotic selection of floral variants and showcased in epoxy resin. “The resin is a two-part thermosetting liquid, so one has to mix the two and it solidifies and takes the form of whatever you set it in. One piece takes us around 37 hours, we work with the local communities in Chennai,” Giritaj reveals.

Alankaara’s signature hydrangea juda pins or vintage garden sun catchers made with maple, bougainvillea are conceptually quite ingenious and make for terrific collectibles. “Initially we were collecting all our flowers ourselves, but the demand for exotic picks started around a couple of years back (Alankaara turned four this August). We started buying from Colombia, which is one of the world’s largest exporters of flowers. But for the most part we source flowers from India, except some exotic ranges which we bring in from abroad,” Giriraj says. 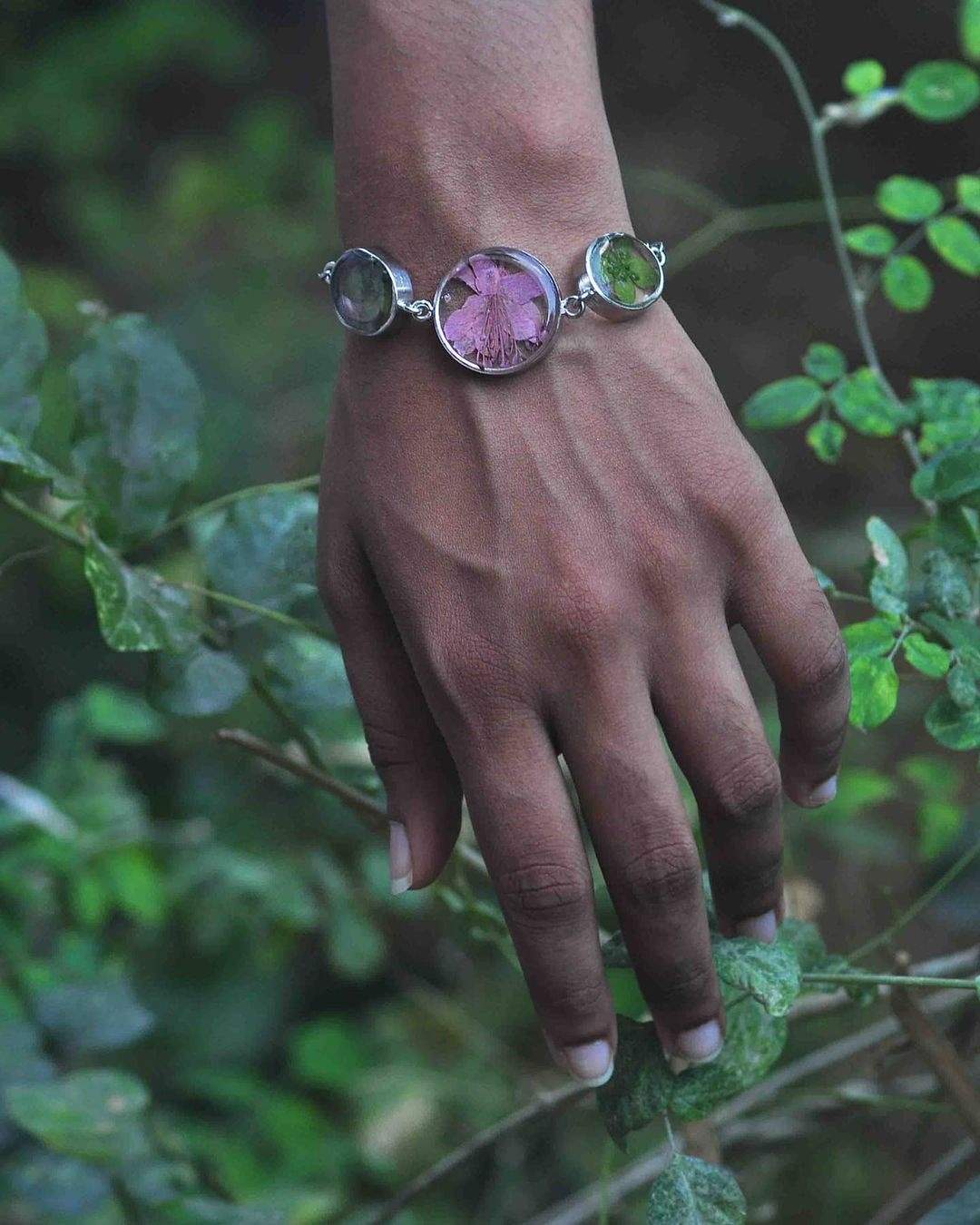 The label just introduced a line of nose pins, which are the world's first fossilised nose ornaments, and are conceived as an homage to aboriginal legacies. The Kalinda Nose Pin, for instance, is an ode to the Aboriginal people of 44,000 BC Australia who innovated crafted kangaroo bone nose ornaments that were considered to be a symbol of status and wealth and were often styled with twigs or flowers, and the design specifically represents the diorama of Aboriginal bone jewellery culture. Similarly the Kannagi Nose Pin uses Dravidian colours, like emerald greens, a oxidised red and golden yellow of the Pandya Dynasty, which have legacies all over the coastal areas of Tamil Nadu till date. Our recommended picks: The concept sun catchers and the amulet glass globe necklaces which feature the most unusual locally-sourced botanicals.