With Zoya’s new jewellery line, Gauri Khan proves once again why she’s the chosen tastemaker for the gilded set

There are many Gauri Khans. The giggling, care-free Holi-playing wife of a rising superstar in an old video. The poised, perfectly coiffed wife by her husband’s side on red carpets of film awards and famous weddings. The mother, anxious about her children’s well-being, shouting out to them about their homework when they were younger. The co-founder and co-chairperson, along with her global superstar husband Shah Rukh Khan, of the film production company Red Chillies Entertainment. And now the new Gauri Khan, business-woman, designer and tastemaker, not merely for the Bollywood First Wives’ Club, but also for those who want a home as beautiful as Mannat. A home that her husband modestly and comically once described as the second most famous home in India after Rashtrapati Bhavan.

It all started with her redesigning Mannat. Her friend Kajal Anand invited her to join her design studio in town, and then Suzanne Khan invited her to curate a line for her interior design store, The Charcoal Project. “I enjoyed the process, and slowly started taking up more professional work that led to my own label Gauri Khan Designs. Now our philosophy includes residential interiors, commercial spaces such as retail outlets, restaurants, spas, hotels and turnkey projects,” she says. Whether it is designing Karan Johar’s nursery for twins Yash and Roohi or rising star Sidharth Malhotra’s home, Gauri Khan is the go-to-designer for a touch of glamour. Calling her style luxury chic, the 50-year-old says she follows three basic principles of home design — keep it simple and classic, don’t confuse too many styles; have one statement piece in the room, and design around that, don’t clutter; ensure good lighting, as it will always add atmosphere, while funky chandeliers can add a great festive twist to your home. 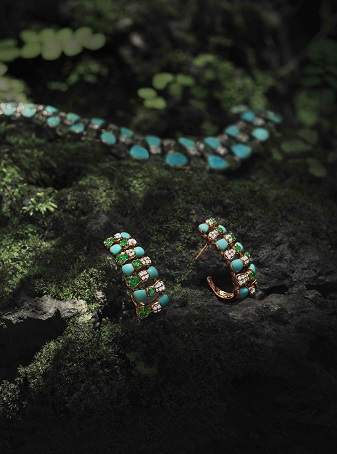 A self-described disciplined person, Khan manages the work-life balance well, especially now. “Initially the kids were young and needed attention. Aryan’s now graduated and Suhana is in college, AbRam is also older and in school, so there is space to give my love for design a more structured form. The family has been very supportive,” she says.

And some of the perks of her new career are the endorsements that have come her way, whether it is home furnishings or jewellery brands. Zoya is one such brand that admires her style and is associated with her. She launched their store in Delhi in 2019, and says that as a designer and a creative person, she likes things that are finely crafted, have inspired design and beautiful storytelling. The jewellery brand’s new collection Rooted is an ode to the inner strength of a woman. It draws on motifs from the rainforests of the world, which have survived for millions of years to depict resilience. It is something that resonates with her, in her work and in her life, as she draws inspiration from everywhere — travel, architecture, art, nature and creative people.