Heard of dyes made from bacteria or floral leather? Here's a look at brands using tech to disrupt sustainable fashion

Over the past few years, sustainability has quickly become the fashion community’s greatest and most used buzzword. While the Indian fashion industry and its designers — think Naushad Ali, Soham Dave, Rahul Mishra, Ka-sha — have primarily focused on the use of handloom and craft aspect of sustainability, material innovation often finds itself on the backburner.

Looking to fast-track technological and material innovation within the Indian supply chain, Amsterdam-based organisation, Fashion for Good — launched its first South Asia innovation programme earlier this year, with the aim to connect innovators and manufacturers so that they can implement and scale up various sustainable solutions. Now, into its second edition, the platform for sustainable fashion development recently picked nine brands out of 100 startups from the region, five of who are from India. We caught up with three of the innovators focusing on disruptive new materials and dyeing solutions to find out more.

Despite her doctoral degree in biotechnology, Vaishali Kulkarni spends a lot of her time poring over colour trends and forecasts. “But, employing the use of biodesign within the fashion industry involves not just understanding the science of things. It includes studying the directives that govern fashion and beauty trends,” explains the 32-year-old.

Vaishali’s focus is on changing the dyeing process in the textile industry with the help of bacteria. “Today, when we think of natural colours, we think of fruits and vegetables. However, not only do they produce a limited palette, they are seasonal and land-intensive,” she says. At KB Cols, the biotech studio she founded in 2018, the Institute of Chemical Technology graduate, has developed a primary hue palette extracted from bacterium typically found in the soil. This pigment, in turn, could potentially be used to make colourfast dyes that, unlike current methods, use little water and no chemicals. Having signed MoUs with textile partners in India, Vaishali tells us that collaborations with the cosmetic and food industries are in the pipeline.

Using design to raise awareness, all while creating novel products is at the heart of Ankit Agarwal’s success. Having launched his brand Phool in 2017, the Kanpur-based start-up first came into the spotlight for its unique clean-up programme that saw the brand manufacture incense sticks using discarded temple flowers, primarily procured from the Ganga ghat. Their latest innovation, which has received nods from Lakmé Fashion Week and the United Nations, is a vegan, animal-free leather alternative named Fleather. “We collect 4.8 tonnes of floral waste on a daily basis from temples in Kanpur alone. Since December last year, we have been sourcing flowers from Tirupati too. During this process, we realised that incense sticks had a limited market and that we had not even scratched the surface of product possibilities,” explains Ankit, talking about heir newest offering.

Mimicking leather in strength and durability, the IIT graduate explains the manufacturing process of this floral leather as something akin to making curd. “Agricultural waste is rich in cellulose and can be used as feedstock for producing fleather.” Currently, in tie-ups with three Italian fashion houses (details of which are under embargo), Ankit tells us an international launch is on the cards.

Bamboo alternatives have found many takers in the market with the ban of single-use plastics. However, in its most basic form — picture disposables like straws and cutlery made from solid bamboo — the poor man’s timber retains much of its rustic charm. Attempting to shift this preconceived notion, and rebrand it as the material of the future, Anubhav Mittal of Biomize has been exploring possibilities of making bamboo as adaptable and versatile as its plastic counterparts. “Solid bamboo products that are available in the market lack scalability and are more handicrafts than industrial in nature,” explains the entrepreneur, who has previously headed verticals at brands like Chumbak. Working on a proprietary bamboo-based granule that can be converted into textiles or non-woven fibres, Biomize has just launched a collection of organic tableware — like cutlery, designer plates that resemble plastic — and range of garments. 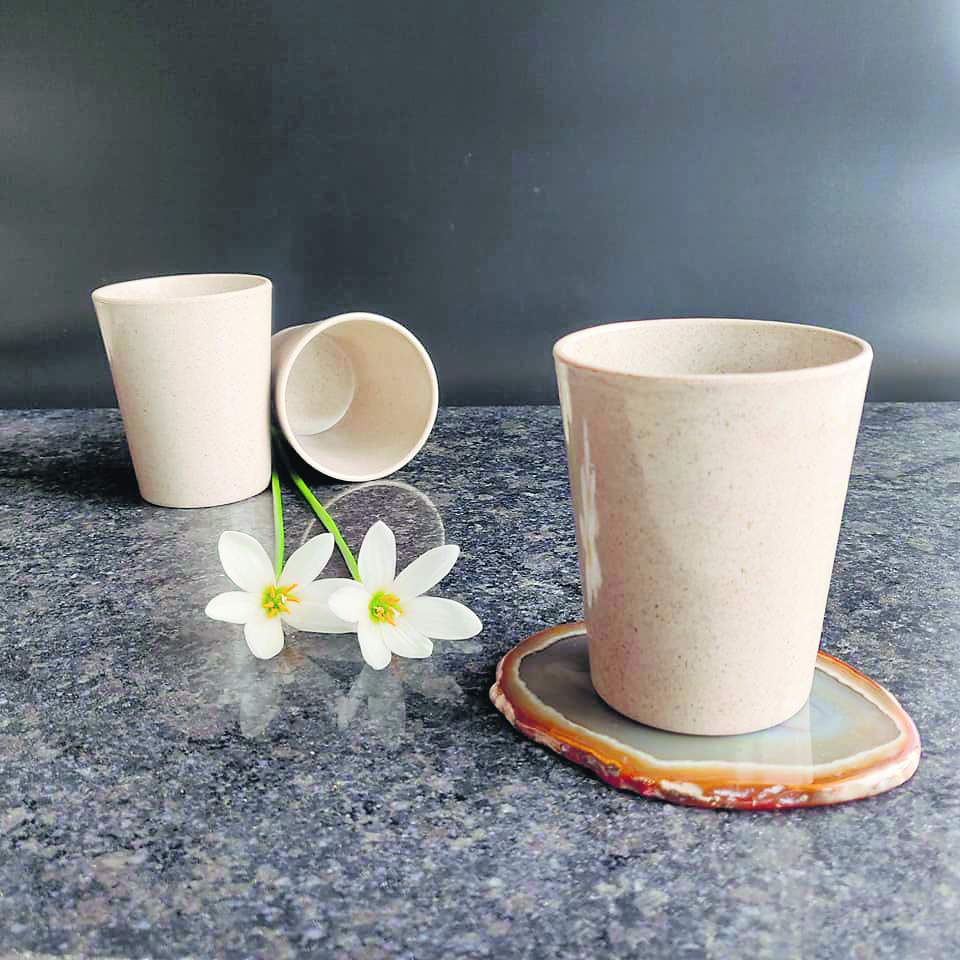 Design directive: Bio-degradable bamboo granules that can be converted into textiles or non-woven fibres.