Thanks to the fourth season of The Crown, which dropped on Netflix earlier this month, the late Princess Diana is back in the spotlight. We pick out dresses from labels like Oscar De La Renta and Red Valentino that capture the essence of the fashion icon's signature style. Silver lining
Resembling the dress the princess wore to the 1985 premiere of the James Bond movie A View to a Kill, this gown from Oscar De La Renta is a complete stunner. It is crafted from pleated silk and has a plunging V-neckline. Rs.11,38,350 approximately 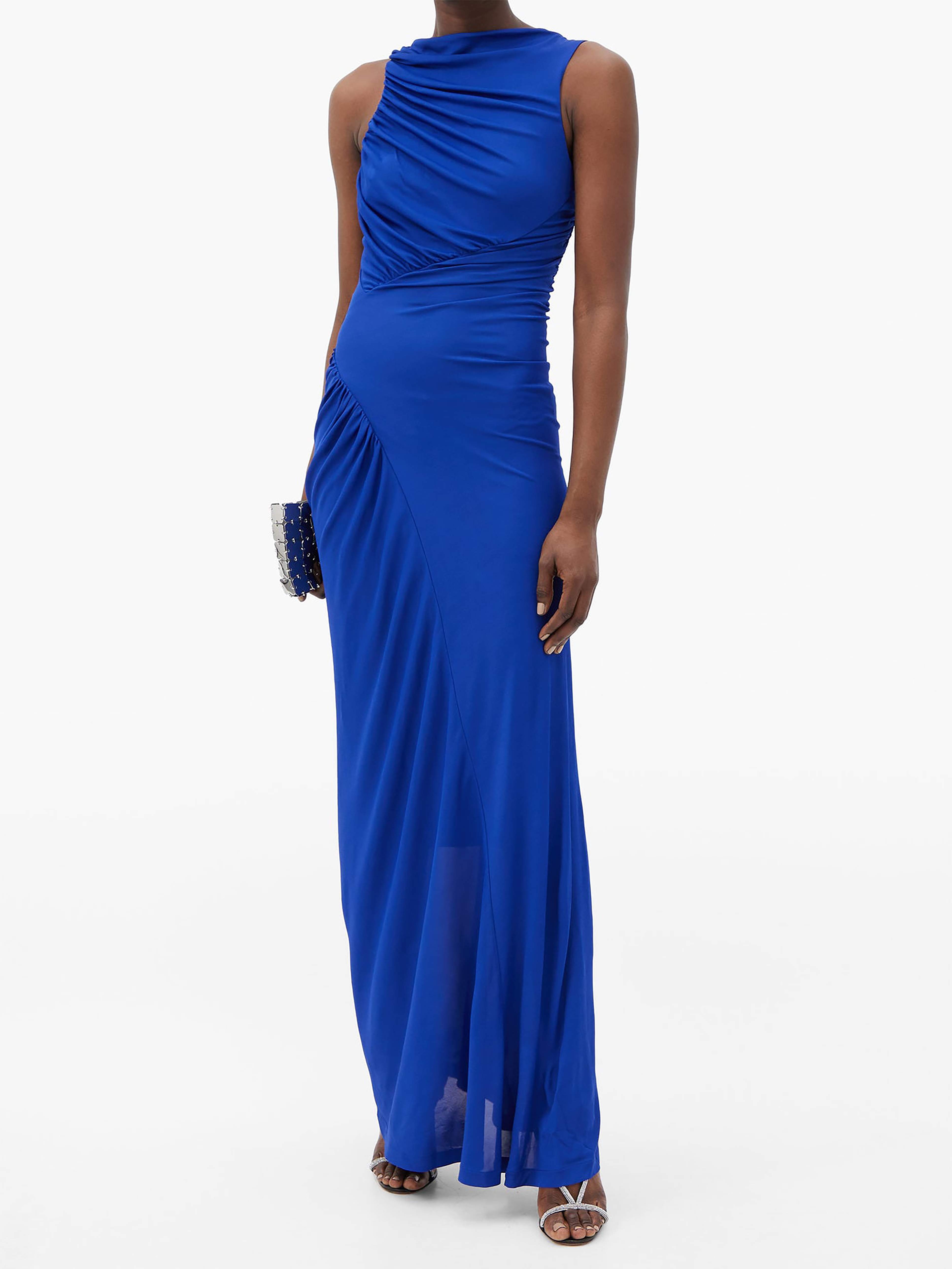 Simply electric
Similar to a Bruce Oldfield dress she was seen in during her 1985 trip to Venice, this style is crafted by the label Atlein from stretch jersey. The electric blue dress has asymmetric gathered panels and a fitted maxi silhouette. Rs.66,835 approximately 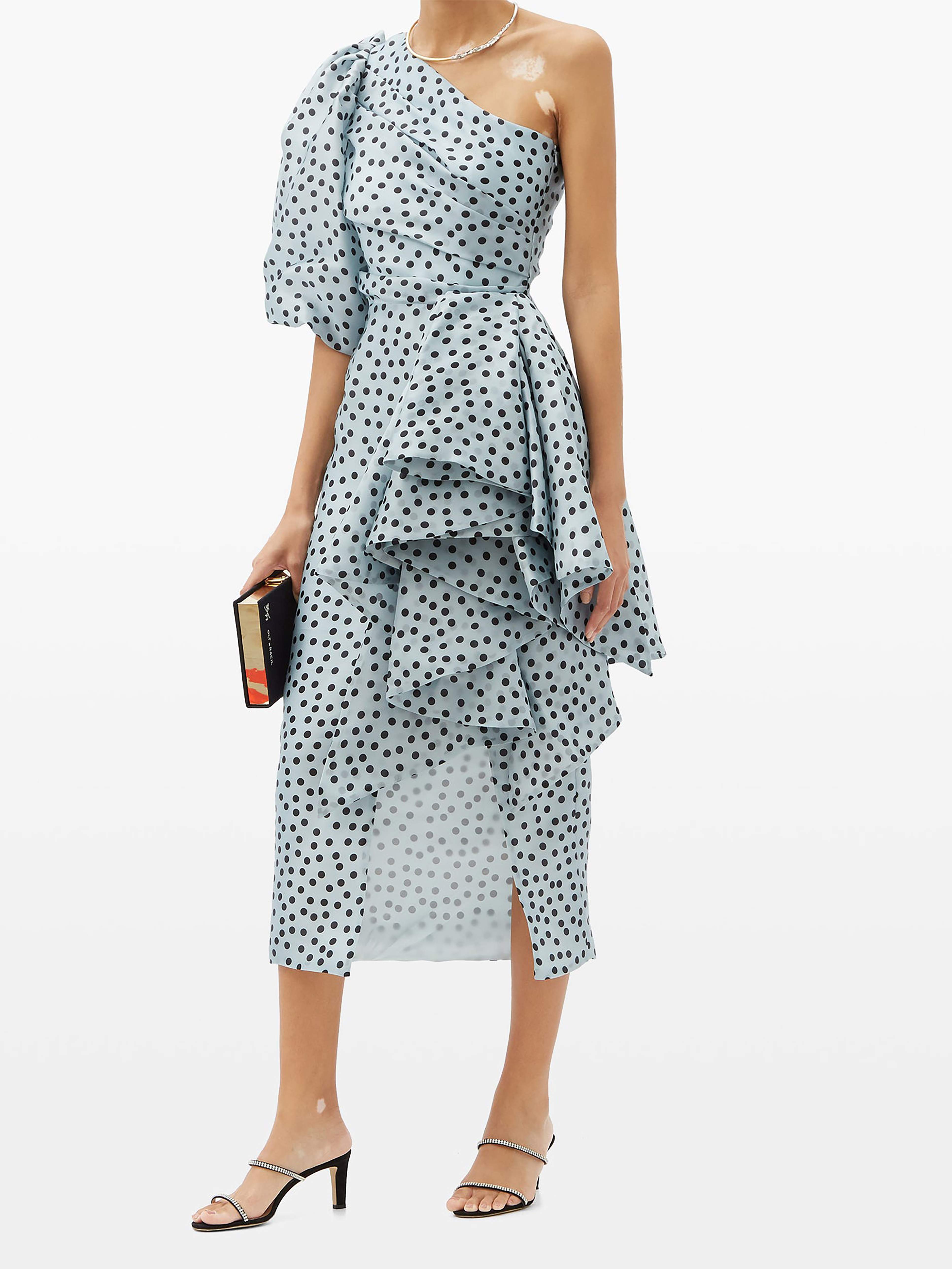 On the dot
Polka dots were synonymous with Lady Diana’s style and the ’80s saw her stepping out in one-shoulder dresses with gathers at the waist and puff sleeves. This Rasario dress is fashioned out of silk organza and has a ruched bodice. Rs.1,36,250 approximately 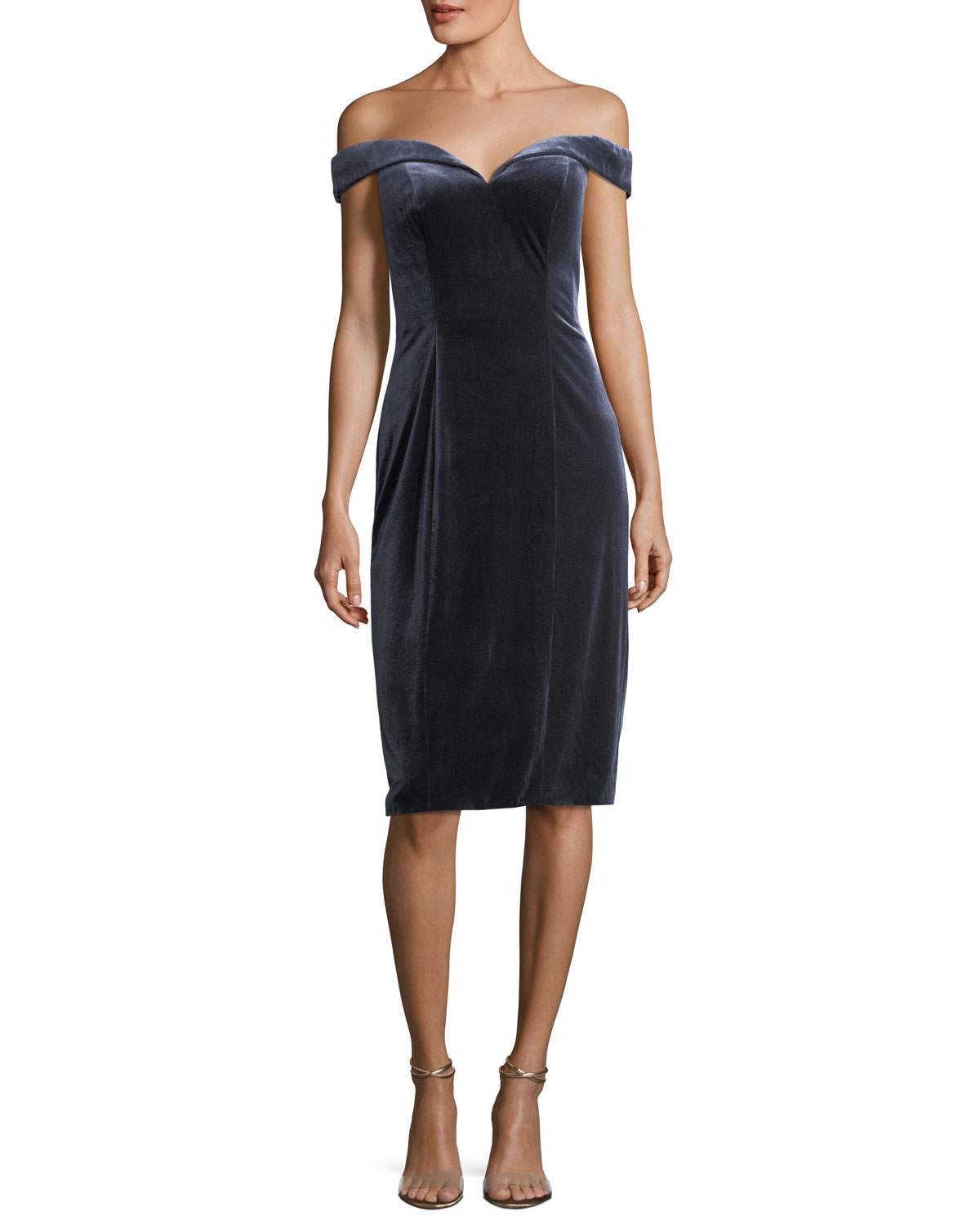 Play it bold
The deep navy velvet dress from Jovani is reminiscent of the famous ‘revenge dress’ Princess Diana wore the day after Prince Charles came clean about his affair with Camilla Parker Bowles. Accessorise it with a choker necklace like Diana or a single string golden necklace with a statement pendant. Rs.36,706 approximately 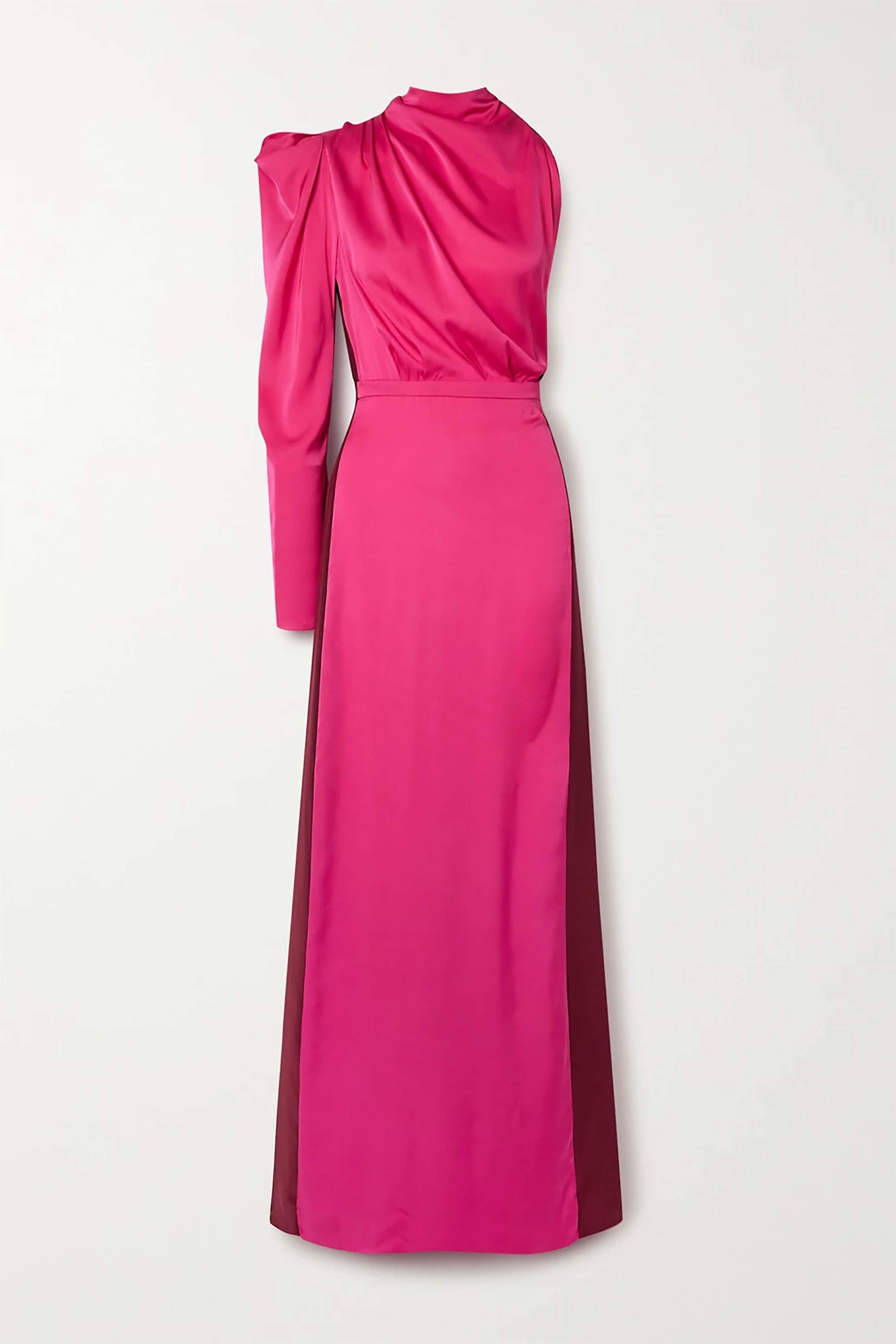 Seeing double
This dress could be seen as a modern take on the pink outfit the Princess wore to the Freemantle Hospital in Perth, Australia in 1983. This Johanna Ortiz creation is called ‘Woman in Love’ and is made with panels of magenta and plum silk georgette. It is detailed with a draped shoulder and cutout back. Rs.1,47,213 approximately 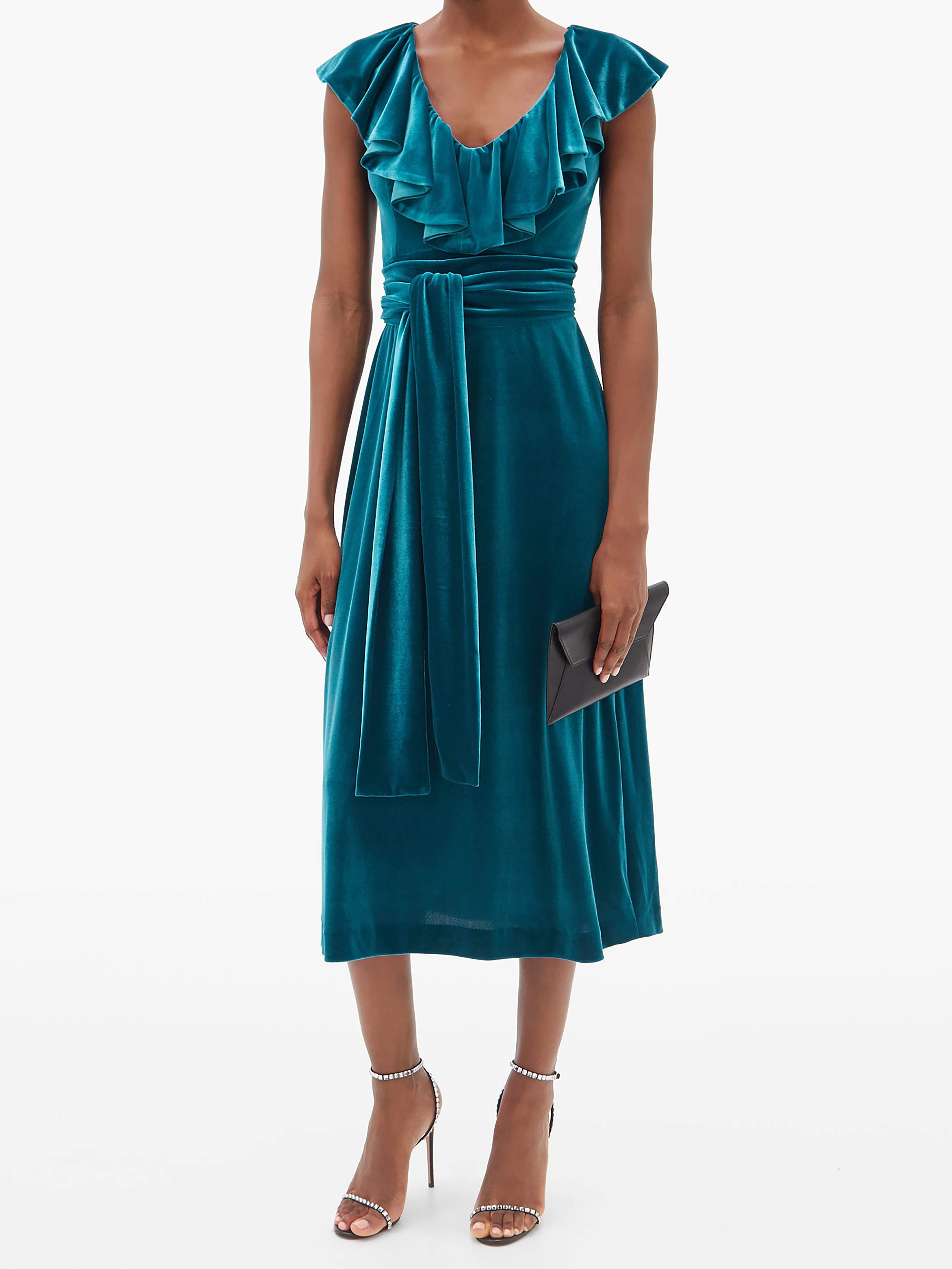 Velvet dream
From the colour and the ruffled neckline to the wraparound waist and length, this Luisa Beccaria dress
references multiple elements from Diana’s signature style. The midi-dress is made from luxurious velvet and is best worn with a golden cuff. Rs.89,910 approximately Red siren
The late Princess’ affinity for red is common knowledge, and one of her most stunning outfits was a red dress, similar to this number, she was spotted in during a Parisian dinner held in her honour. This Red Valentino dress is made from crepe and is designed with a sweetheart neckline and puff shoulders. Rs.38,320 approximately