It is certainly true that one has come to expect a multi-sensory appeal from the designs of Abu Jani and Sandeep Khosla. Using embellished layered and multi-hued styles, the duo by their own accord design for the woman who wants to be indulged. Believed to have stayed relevant in an industry through one overarching philosophy of designing for themselves, the Sandeep Khosla asserts that: Great design isn’t made for an audience. A highly detail-driven line, their Summer spring collection titled Black Gold launched over the weekend in support of the Cancer Patients Aid Association and showcased 25 silhouettes ranging from sequined dresses and applique skirts to mirror embroidered lehengas. Common thread
The collection that primarily focuses on texture and structure takes a pronounced Indian leaning along with the duo’s signature embroidery and surface embellishment techniques while the silhouettes are a mixture of Indian and international styles. “Black Gold much like our previous lines are exotic with a component of fun. There is an element of fusion in terms of the embroidery techniques that we have used.” Keeping design sensibilities chic, Sandeep tells us that their designs and embroideries are only getting finer and more elegant with time. “Over the top styling is not something that we are interested in. Sure, the term is used interchangeably with maximalism. For both of us it comes down to attention to detail and finesse,” explains Sandeep. 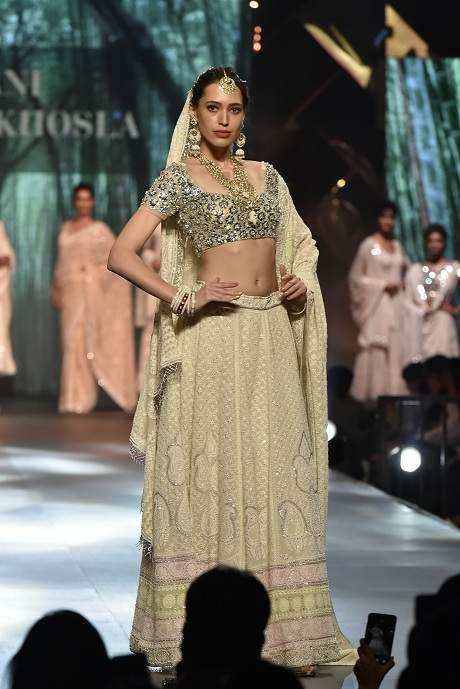 Mirrored attraction
Synonymous with their mirror work, chikan and zardosi in gold and silver, the designer duo have worked extensively with the techniques almost since the inception of their brand. Masters of reinvention, however, the collection, though inspired by the classical elegance of these crafts are far from basic. Expect to find an oversized pleated shoulder blouse from the brand’s western design label Khosla Jani. Featuring mirrored gem detailing on the front and back centre, the hand embroidery and detailing is believed to have taken up to 33 hours to complete. “Innovating and reintroducing the elements of indigenous Indian crafts in different styles and formats is what continues to capture the imagination of our audience world over.” The collection also makes extensive use of elaborate applique. Monochrome study
Characterised by the use of a dominating white and black palette, the SS ’18 line stays true to the aesthetics of the designers who launched an all-white ensemble with elaborate chikankari work as part of their last collection. “It’s all about breaking traditional rules for us,” says Sandeep. Even as elements from their western couture line find their way into the collection as intricately embroidered gowns in silk, the line also sees a mixture of saris, lehengas, salwar suits with the occasional pop of pastel shades of ivory, pale light green and pale pink. “While Black Gold does embody our maximalist aesthetic, the line does have its share of underplayed pieces as well.”
On other AJSK projects, the designers released an all-white cotton Prêt line titled Gulabo as recently as Valentine’s day and are working towards creating a new collection for their Khosla Jani label.