Toucans, hornbills, banana fronds are perhaps not the brocade patterns that you would expect on a traditional Benaras drape. But, it is these unconventional motifs that first grab your attention when you peruse through Kshitij Jalori’s latest collection, Saigon Central. Inspired by the tropical landscapes of Sri Lanka, Madagascar and Vietnam, the line deftly sidesteps quintessential betel leaf and paisley patterns — revelling in the designer’s unique visual design language that has been his calling card since the launch of his label in 2018. “I think my vision comes from the fact that I am not a fashion designer, but a textile designer. I have always wanted to make Indian textiles with a very global appeal and vision,” shares the NIFT graduate. 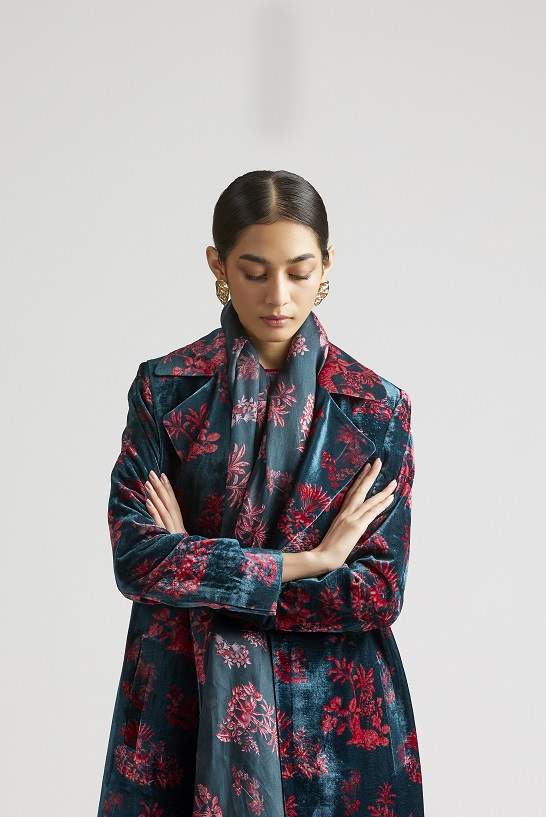 Focussing on a contemporary audience, Saigon Central goes beyond the staple saris, dupattas and lehengas and features a range of distinct straight cut, fitted silhouettes including pants, kurtas, blazers, trench coats and puffer jackets. Offering a muted colour palette that veers from black and charcoal grey to sapphire and teal, the line’s highlights come through in its prints, embroidery and hidden art deco detailing. “With every story that I build, there are multiple influences. Yes, that is the distinct tropical vibe, but you also see the inspiration that is artistic.” This influence is clearly evident in the Sapphire Rosseau trenchcoat in the collection. Drawing cues from Henri Rousseau’s Hidden Garden, this jacket sports a back panel which opens up to reveal a mystical garden — rife with prints of ravenalas, monstera leaves, palms and alocasias.

A technically rich line, this collection employs kadhwa and phekwa techniques, while the brocade patterning is carried out using urtoo (a weave detailing of each shape). “Nowadays, the brocades are created using a basic diagonal twill weave. Traditionally, each of these shapes employed a particular detailing technique which helped register the pattern better on the fabric. A major aspect of my work with brocade has included developing this patterning weave,” explains the New Delhi-based designer.

With a packed 2021 roster, we learn that Kshitij currently has over three collections in the works. The first one, which is expected to release in March, attempts to reimagine Mexico and its flora and fauna through the lens of American artist Ellsworth Kelly. “Though the line does take off from Saigon Central, we will be introducing a very happy and bright palette of colours.” However, what does have us excited is the 30-year-old’s mid-year collection that will see the designer dabble with a different textile form. “What I can tell you is that though it is not in the traditional sense from a weaving centre, I think this craft form could be Punjab’s answer to Lucknow’s Chikankari.”

Knit wit
While most silk weavers in Benaras work with a high-twist Kathan silk, Kshitij prefers the allure of low-twist weave, which gives the fabric better drapability. “Kathan has almost 1,000 twists per sq inch and this produces a lot of friction. Traditionally, Benaras fabrics were softer because they used a weave called Patpana, which is a loose, untwisted silk. What I use for my collections is called Sappe silk. This has about 100-150 twists per inch. This gives the sari volume and gives the body more weight, making it more drapable.”