In many ways, the concept of innovation has been defined and redefined at Lakme’s Gen Next Runway. If it was androgyny last season, a new crop of designers are all set to put the focus back to indigenous crafts at the upcoming edition. Handpicked by a panel of the elite from the industry which includes Manish Malhotra, the Autumn/ Winter edition of LFW will see ideas as diverse as zero wastage production techniques to metal-based designs. Weeks away from their runway debut, we speak to the Gen Next about their aesthetics. 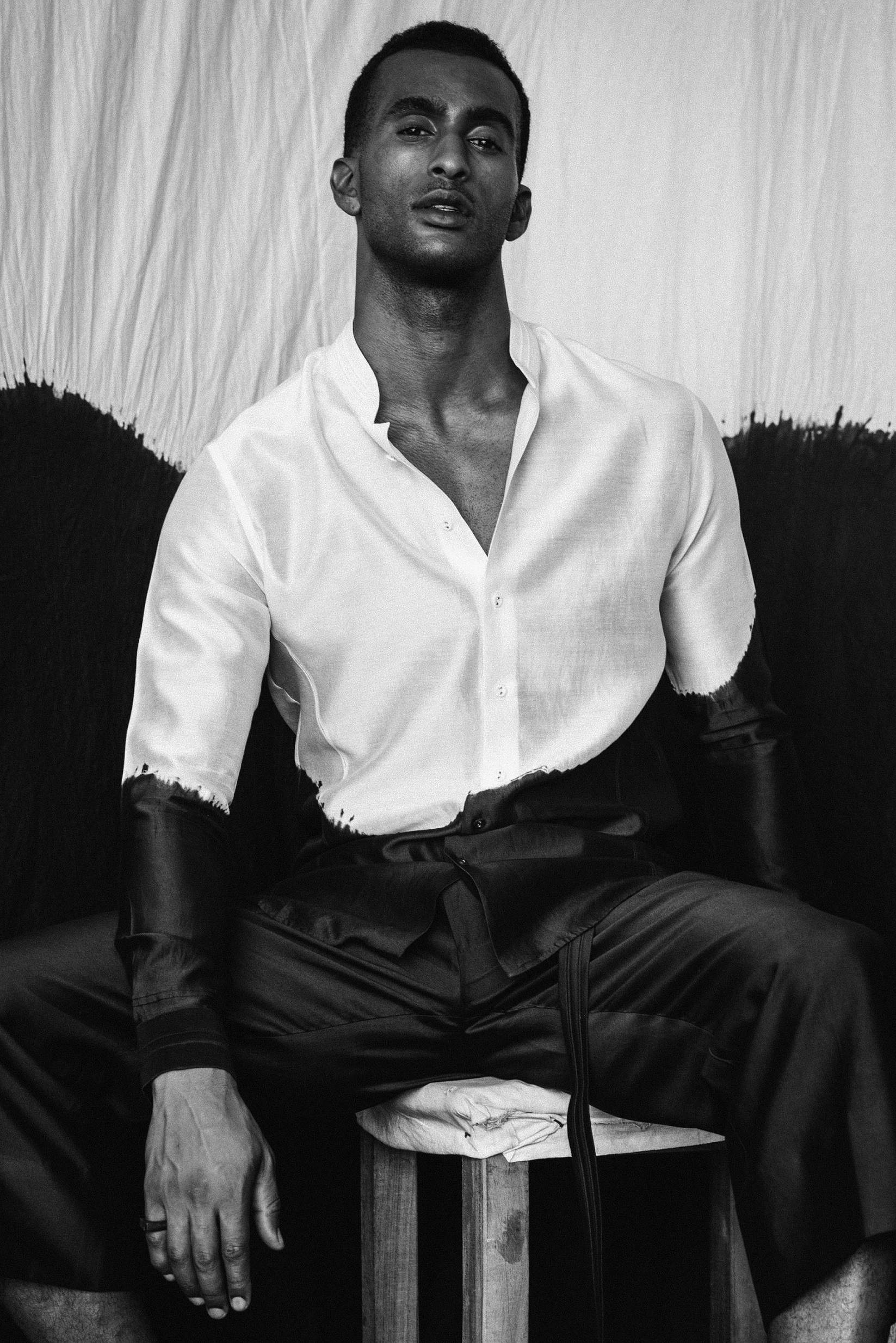 Bloni by Akshat Bansal
Over the multiple editions of LFW, the one trend that remains unchallenged is monochrome. Taking on the same through his androgynous collection—which combines imported Italian crepes with indigenous fabrics like chanderi—this Delhiite has attempted to create an ensemble with global appeal. “For Indian textiles, we source the fabrics through weavers, and experiment with blends and looms to stay unique. We do import fabrics such as Italian crepe, suiting and shirting fabrics from around the world, depending on the affordability of the outfit,” adds the 26-year-old who has worked with designers including Tarun Tahiliani. 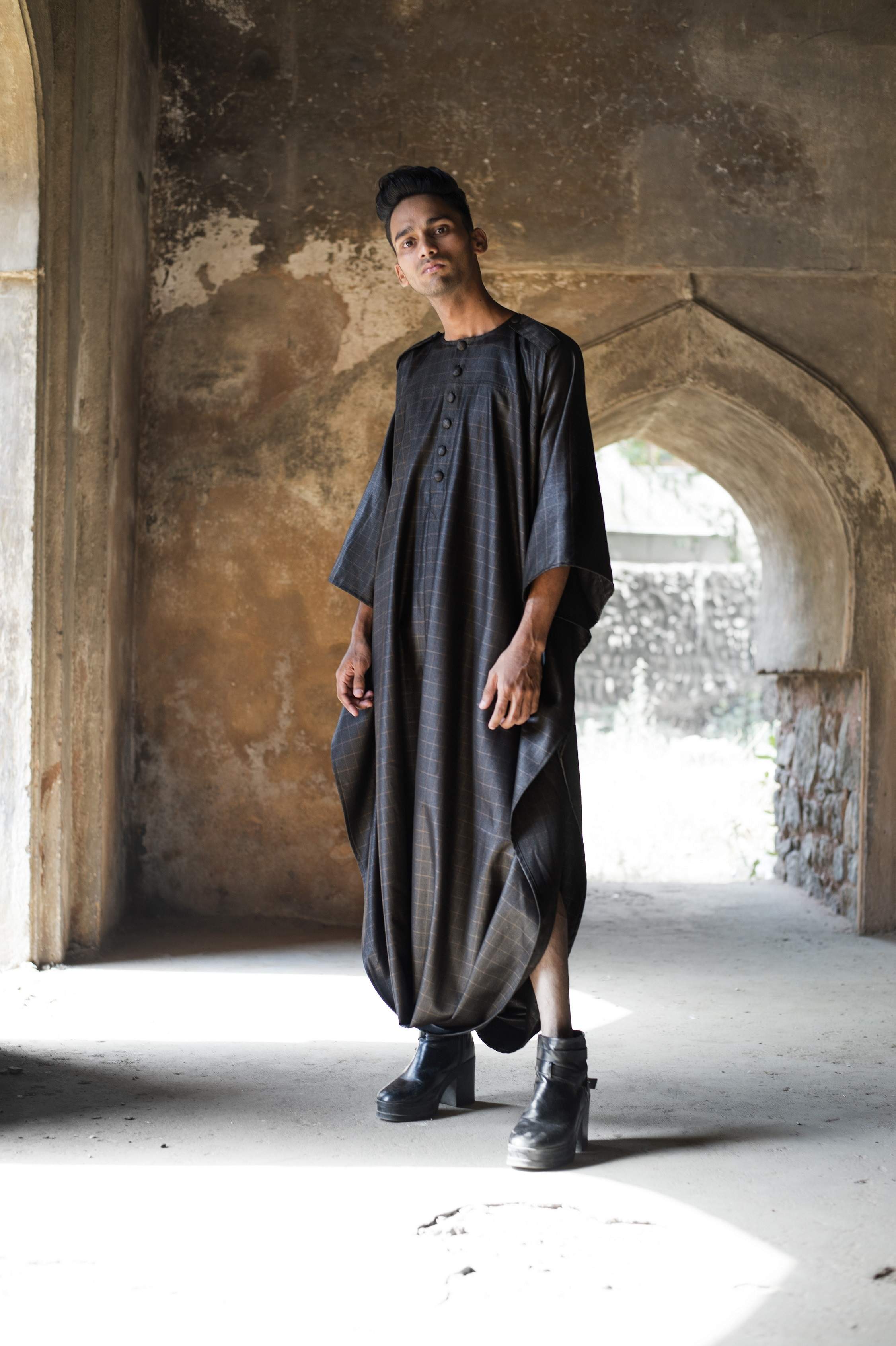 Aanam by Sumiran Kabir Chawla
For Sumiran, each material holds a story within itself. “When we directly drape a fabric on a real body the drape starts telling its own story,” explains the 30-year-old, adding that Aanam’s  wool intensive collection features a mix of draping and patternmaking in order to ensure a zero wastage policy.Titled Sonagachi AW17—inspired by the community living in Kolkata’s red light area—the Delhi-based couturier’s collection showcases suiting and wool blends from the Woolmark company’s Fall Winter collection. “We have also worked with a community who works closely with the women from the red light area, helping them to reconcile to normal day jobs and get back to a better life and stop women trafficking,” shares Sumiran. 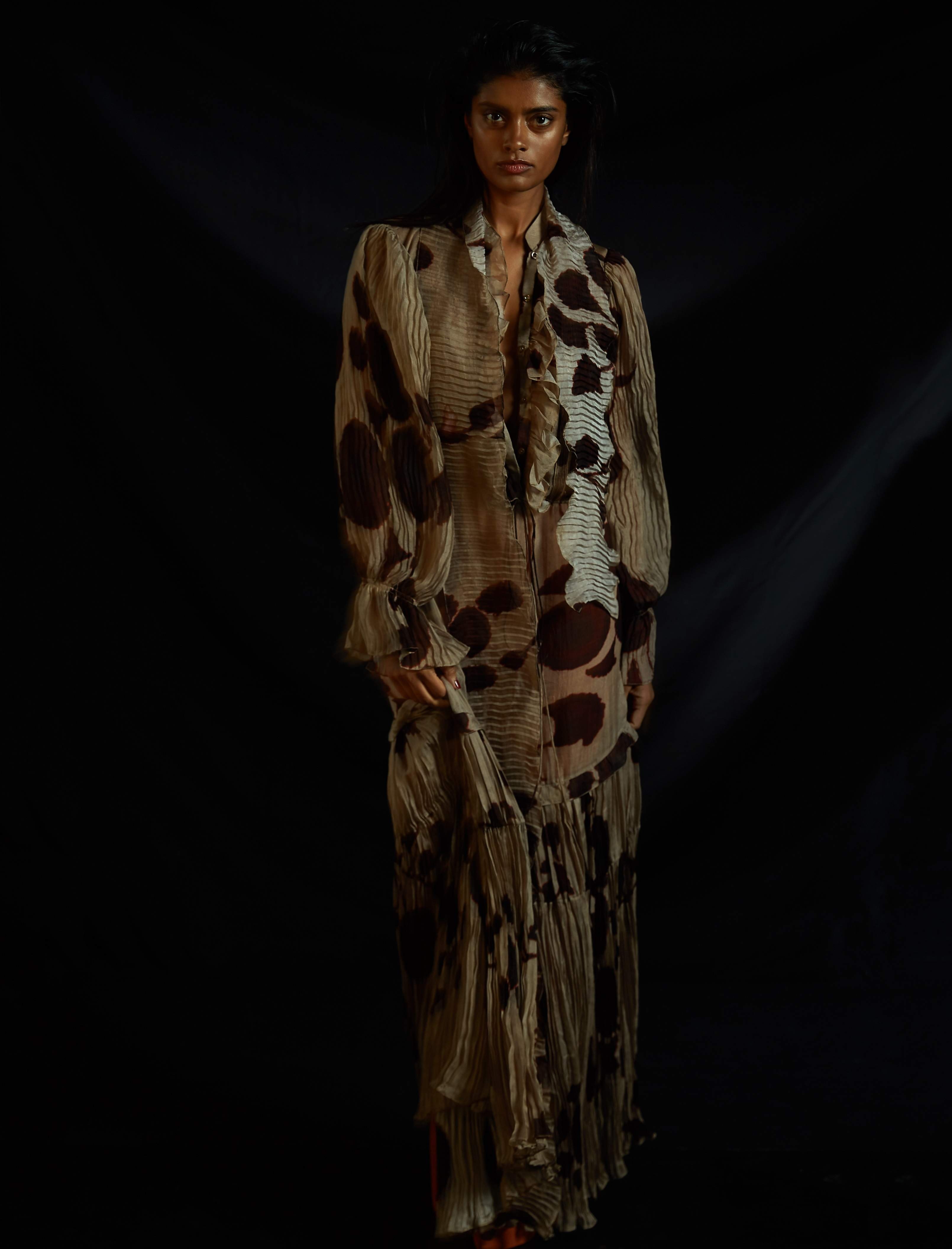 Saaksha & Kinni by Saaksha Parekh & Kinnari Kamat
Integrating metal or a bit of bling to the attire is one of the hottest trends we identified at Lakme SR17 edition. Favoured by stalwarts including Amit Aggarwal, the metallic statements are now finding its way to AW17 via this Mumbai-based designer duo’s outfits. “In our particular craft, we use metal sheets (badla) woven into intricate thread work to create a juxtaposition of delicate cotton and silks, against edgy, dark embroidery. We had to make sure the sheets of metal we used were cut thinly and finely so as to remain lightweight and nimble enough to be interwoven into the thread work. This was also to ensure it would not pull the fabric or cause any tears,” says the entrepreneurs. 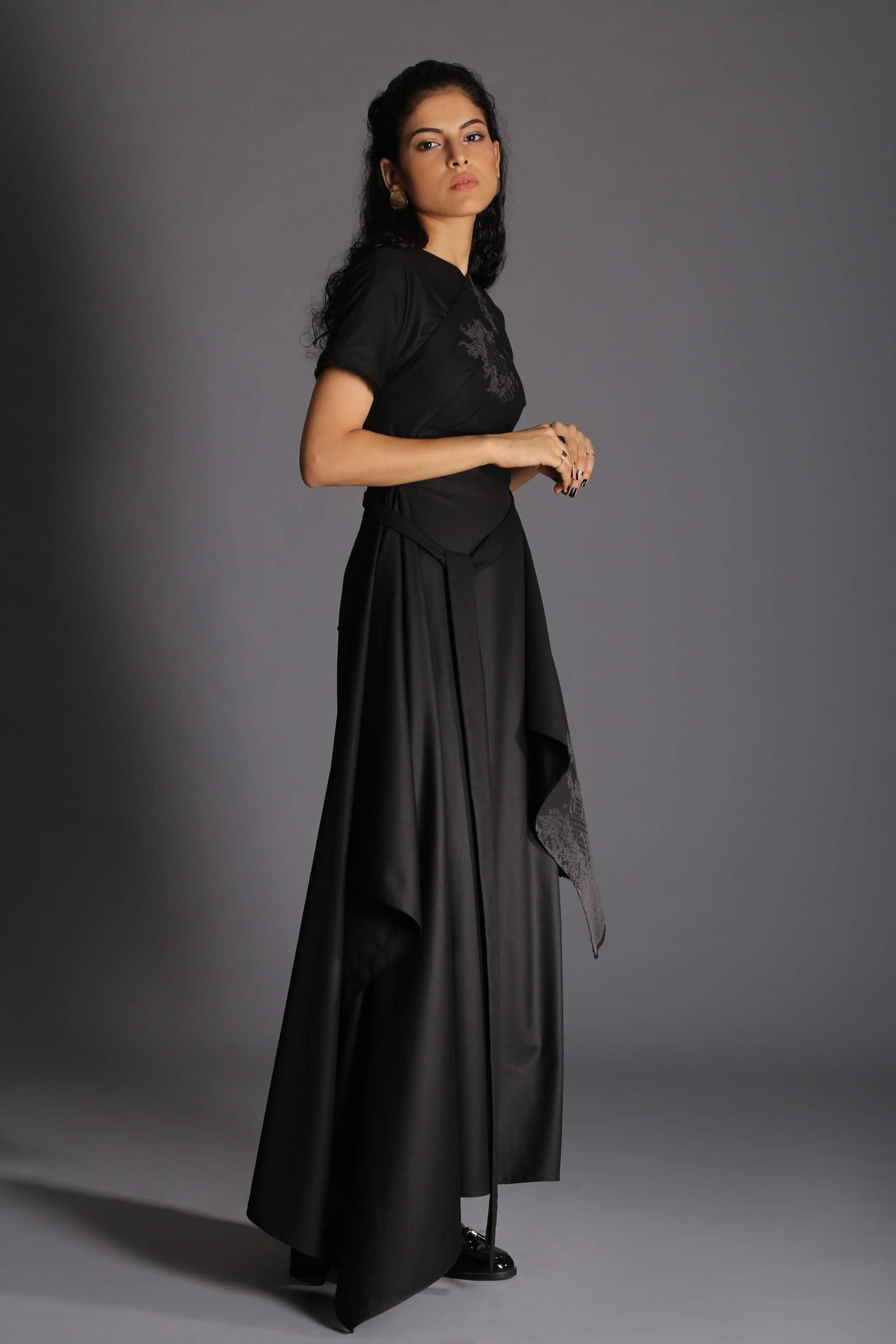 Integument by Deepak Pathak
An amalgam of his memories and design aesthetics, Deepak Pathak’s collection is a nostalgic route to the designer’s past where meandering riverbanks translate into sinuous draped layers and silhouettes on his apparel. “It is a reflection of my love for unconventional silhouettes and a darker palette, all while keeping the focus on volume and texture of the apparel,” shares the 30-year-old, explaining that the restrictive colour scheme is his take on minimalism. Inclined towards suiting fabrics, the Noida-based designer's collection bias towards exceptionally heavy textile is evident in the choice of material that ranges from Twill suiting, knitted nets, woollen blends and felt. 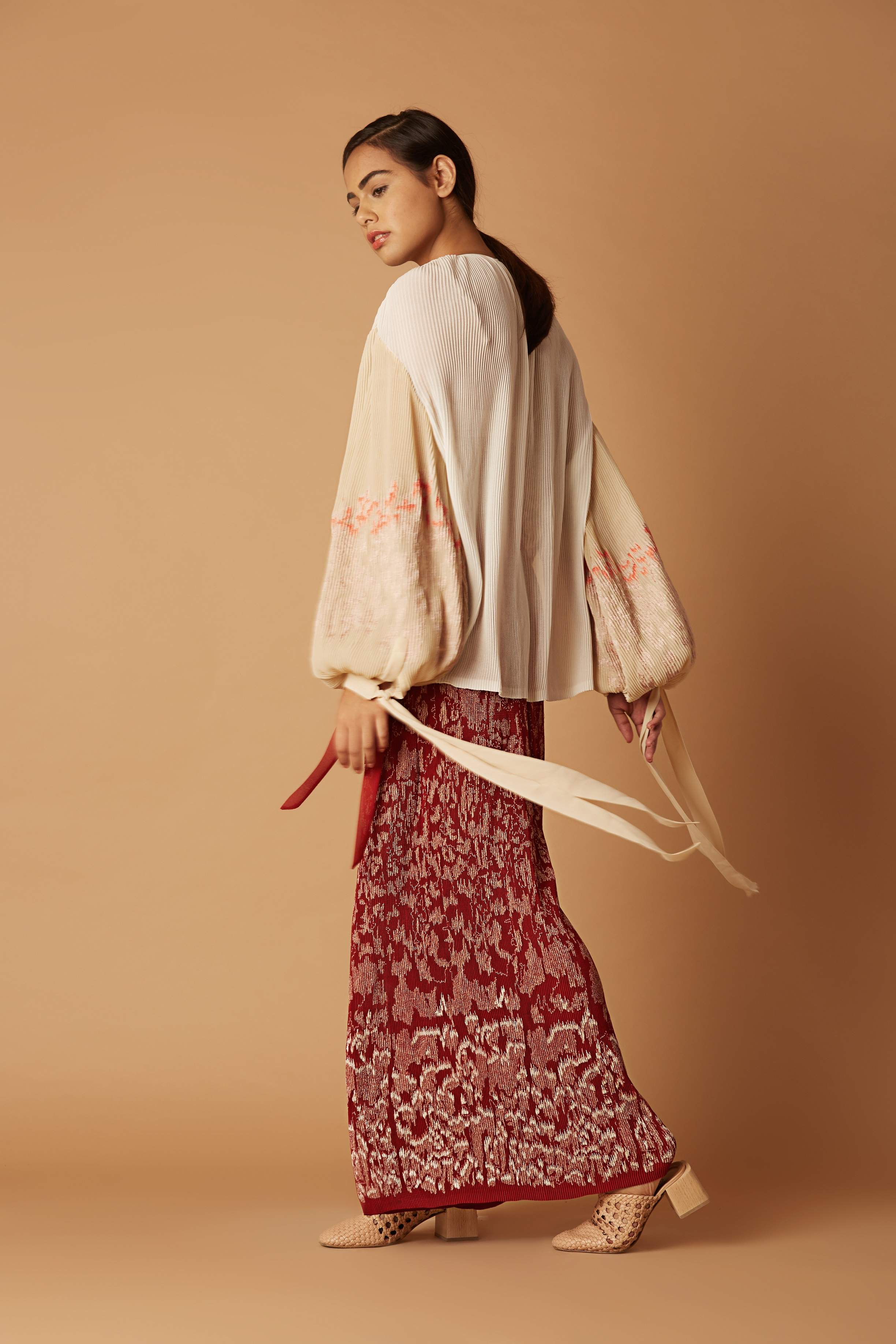