Perth is proudly called ‘the most isolated city in the world’. A tidbit of trivia that you will hear repeatedly almost like a novelty catchphrase whether on a guided tour or shopping for magnets in a souvenir shop. It’s nearest city, Adelaide is 2,104 km (a three-hour plane ride away). No big deal right?  But back in the day, and we mean way back (1800s) — this was the very reason which stopped people from wanting to go there at all. So much so, that to populate Perth in 1850 — the government decided to sail in prisoners of war. Once off the ship, the convicts were greeted with the rather unpleasant task of building their own prison. Over a century later, the Fremantle prison which is Western Australia’s (WA) oldest heritage site still stands tall today. And guess what, if you’re up to it, you can even pay to spend a night as an inmate behind bars!

Unique experiences like these as it turns out are not one-off, and are entirely intentional, going by what John Sullivan, Tourism Australia Managing Director, had to say at the Australian Tourism Exchange 2019, that coincided with our visit. “Our research shows that familiarity and fashionability are driving holiday decision making in the region and that travellers today are seeking destinations and experiences that are ‘fashionable’ by virtue of being unusual,” he said during the event. And the idea behind this statement stuck with us through our time spent exploring sunny WA — whether it was sipping on word-class wines over at Margaret River, a little town South of Perth that boasts over 120 wineries, getting a selfie with a quokka on Rottnest Island or sampling contemporary cuisine with Aboriginal sensibilities like ‘wattleseed butter’ at Stable Hands in Fremantle.

Sun, surf & thongs
What brings it all together, of course, is the amazing weather. The simplest breakdown of the seasons in Australia that we’ve come across is the six seasons of the indigenous Nyoongar calendar. It goes something like this: Nice, Dry, Hot, Hotter, Wet and Wettest. Our trip, we can safely say, was very ‘nice’ bearing a slight nip in the air both in the morning and at night.

This is also reason enough for many a Britisher that we met on our travels to move continents just to escape gloomy clouds and the ever-present threat of rain in their country, for clear blue skies, warm afternoons and sandy white beaches. Incidentally, the Perth metro area has 19 beaches, we are told, but there are 20,000 kms of coastline in WA. Although, if you hear someone holler along the shoreline: “Mate, I think I lost my thongs!”

Fret not. Thongs are simply Aussie speak for flip flops.

Purple sausages & black garlic
This a good time to segue into the birth of a new identity that Perth seems to be stepping into — with a whopping 103 million dollars invested in turbocharging tourism across Australia in 2018 — toward areas like festivals and events, cultural attractions, wildlife and aboriginal experiences. Speaking to the latter, Brodie Carr, MD, Tourism Western Australia tells us that out of the 80-odd tourism operators catering to 118 different aboriginal experiences, “You could do everything from camp out in bush territory with members of the community, pull berries from trees and get an experience of how they lived to head over to Lucky Bay and have your aboriginal guide show you how to dig into the sand and drink fresh water from the beach!”

A more visible daily-lived change that denizens will attest to is how the city’s dining scape is gone from drab to fab, compared to a decade ago. “There are a lot of boutique bars and new restaurants that have opened up. And the city is now just a lot more vibrant and fresh,” elaborates Carr, who hails from South Perth. And we couldn’t agree more as we hopped tables from hip restaurants located within the former state treasury house to brunch cafés, craft breweries and even a much-sought-after gourmet Japanese spot run by surfer-cum-chef Mikihito Nagai. Clearly, there is much more than fish ’n’ chips and lamingtons to impress your taste buds.

One day, we’re sampling Beetroot and vodka-cured Ocean Trout served al fresco overlooking plush green foliage and a lake in the distance at The Vineyard Kitchen (Bickley) and another evening we’re tucking into a spicy Thai-inspired Pork and Papaya salad at Long Chim under a canopy of colourful bamboo umbrellas. The latter, helmed by Australian Michelin-star David Thompson and located in the Perth CBD area should definitely be on your must-visit list. We have to drop a special mention to Vanya Cullen, the owner of Cullen Wines who served us an unexpected platter of ‘purple sausages‘ infused with wine from her vineyard that was perhaps the highlight of our wine tasting adventures. And the oh-so-brilliant black garlic paste at Stable Hands in Fremantle which head chef Reece Lardi tells us, “is put in a cooker at 49 degrees, and then takes 40 days to ferment”.

From quokka selfies to kangaroos on the beach to swimming with a humpbacked whale, you can get all the unique experiences across the continent in WA.
— Brodie Carr, MD, Tourism Western Australia 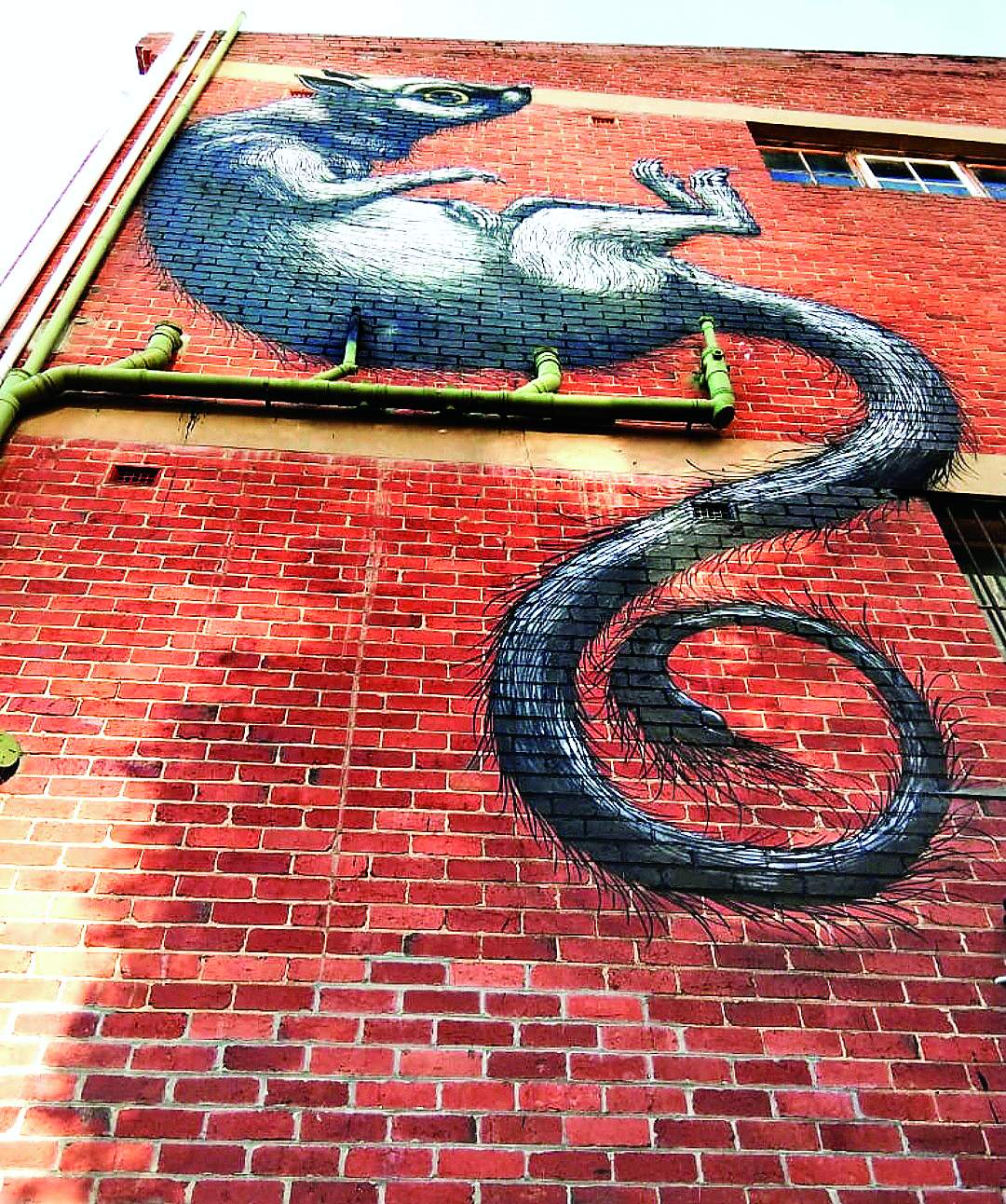 Street art
Work off a heavy lunch by exploring the street art of North Bridge. Look out for a larger-than-life ringtail possum on the facade of a brick building by Belgian artist ROA who likes to introduce native species to cities by painting them on walls or a tree trunk glittering with beer cap embellishments — started by a group of bike couriers who would wait by the bench below the tree, passing the time before the next job! Lake Cave
The long trek descending 140 feet below the surface is well worth it at Lake Cave, about 20 minutes south of  Margaret River town. Our guide describes it as entering time machine — given that it took millions of years for this subterranean cave to form with layer upon layer of sand. Apart from a dramatic light show that ends in pitch blackness, our highlights from the experience were the beautiful crystal formations along the ceiling and tree within the cave that seems to defy gravity as it hovers mid-air, but we’re informed, is as heavy as four cars. WA Botanic Garden
A walk through the Botanic Gardens at Kings Park, home to over 324 plant varieties (over a sprawling 400 hectares, this is one of the largest inner-city parks in the world) gave us a fascinating perspective on how these trees have developed unique features to survive the dry climate. During Spring, the season of fallen golden orange leaves, the sugar gum for instance, loses its bark, not its leaves — where the moisture is stored. While grass trees, a common sight in the bush territory are filled with resin (used to make aboriginal tools) and have outlived forest fires through the years, given that their growth point is
buried underground.

Take me back to paradise city
The city’s burgeoning dining scene is just the icing on the cake though. “The biggest changes that we’ve had in Perth in the last five years has been all the new infrastructure. That means new hotels including the likes of brands like Westin, Ritz-Carlton and The Crown Towers adding maybe 2,000 to 3,000 additional rooms for visitors,” Carr elaborates of the 30-odd new hotels that have come up in Perth recent years, with another dozen on the way. This is apart from two sophisticated new pedestrian bridges — Elizabeth Quay and Matagarup across the Swan River. We recommend you skip the walk here, and try a wind-in-your-face segway tour instead. The latter connects the also newly constructed 60,000 seater Optus stadium which has so far attracted big-ticket names like Eminem, Adele and Manchester United.

And the investment is working. “Our tourism numbers are the highest of any state. Our domestic growth is at 20 per cent and our international growth is in double digits as well,” says Carr confidently. He attributes these fast-growing statistics to this reason: “You can now get all the unique experiences across the Australian continent in one place.”

All said, this is WesternAustralia reinvented — and, it seems, that the promise of Perth is just beginning.

The writer was in Perth by invitation of Tourism Australia.
sonali@newindianexpress.com | @brightasunshine