Unapologetically premium, unquestionably covetable. Microsoft’s Surface lineup has for years served as a showcase of Microsoft’s vision for Windows laptops and 2-in-1s, an ardent memo to makers of Windows laptops as to how it’s meant to be done. The latest in the lineup is not only the flagship Surface Pro 7, but the Surface Pro X, an all-new 2-in-1 that forgoes Intel chips for the new ARM-based chips that have come out of the Microsoft and Qualcomm partnership. Should you go for the traditional WinTel-based Surface Pro 7 or bet on the next generation Pro X? I spent a couple of weeks with both of Microsoft’s latest devices to help you decide. 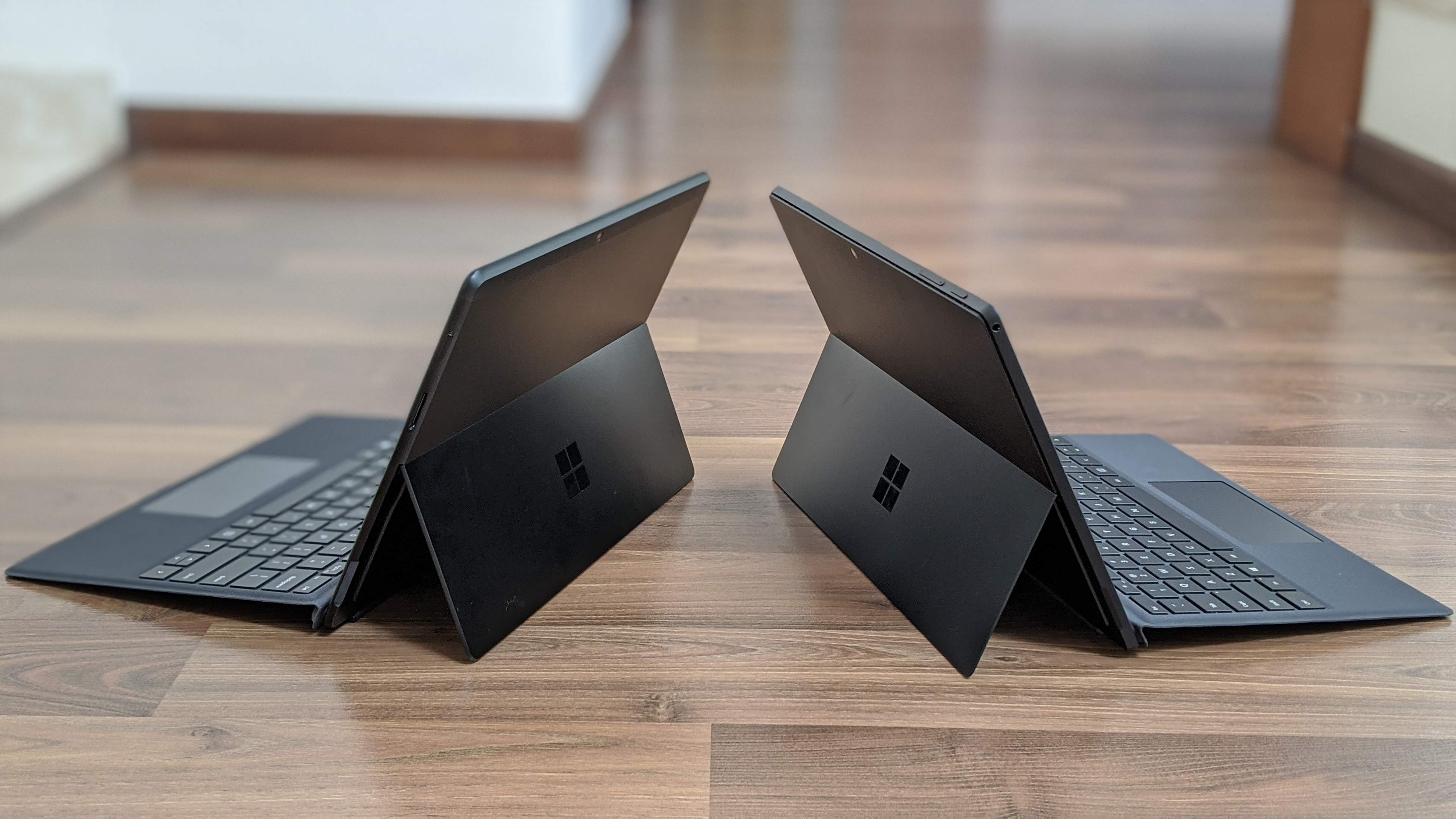 For anyone familiar with the Surface Pro series, the design on both the Pro 7 and the Pro X is instantly familiar – the iconic kickstand with the fluid yet precise angles of tilt and the ability to go from full-tablet to laptop-mode with the optional snap-on keyboard with the suede-like Alcantara fabric. All familiar territory, and I say that in a good way, with the lineup having redefined premium design in the Windows segment some years ago. The Surface Pro 7 takes the least amount of design risks, retaining the existing Pro design with a similarly sized chassis and the same 12.3-inch PixelSense 2736x1824-pixel resolution display as earlier. The Pro X, on the other hand, shaves off an inch of thickness (7.3mm vs the Pro 7’s 8.5mm), which gives the casual onlooker the impression it’s a more compact device despite packing in a marginally bigger 13-inch 2,880 x 1,920-pixel resolution display. At under 800-grams (without the optional keyboards), both are equally light, and their presence can barely be felt in a bag. 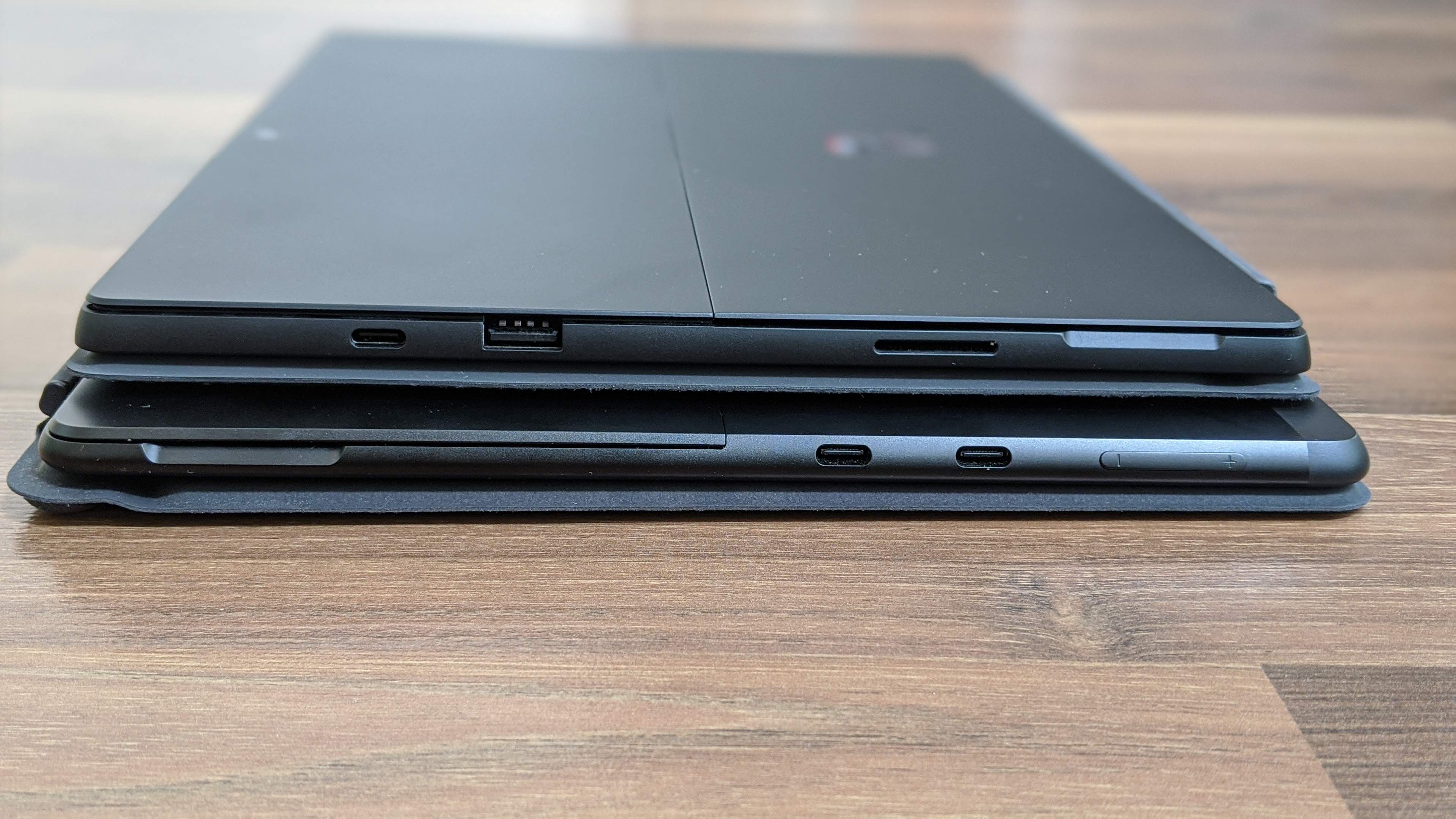 The Surface Pro X goes a couple of steps further than the Pro 7, and then one step back. While it offers the option and easy access to replace the SSD storage (interesting for a device that spends a fair bit of time as a tablet!) and even stows away and wirelessly charges the new Slim Pen stylus within a dedicated slot on the new Type Cover, you do lose out on the older USB Type-A port and the micro-SD card slot seen on the Pro 7 model. The exclusion of the legacy ports is likely driven by demands of ‘thinness’, and you do get two USB Type-C ports to make up for the loss, but it’s something to keep in mind for professionals who rely on these two interfaces for their bread and butter. Interestingly, the Pro X ships with a nano SIM slot for LTE wireless connectivity on the go, which should be super handy once the world starts travelling again. The Pro 7’s PixelSense display is a bright and sharp, high-resolution glossy LCD display with up to 396 nits of peak brightness, which makes it decent for content consumption and productivity apps. The optional Type Cover comes highly recommended not only for the decent amount of key travel and decent sized trackpad but also to protect the screen during travel. The Surface Pen, again an optional extra, is highly usable for on-screen annotation and drawing, but one wishes Microsoft had pushed in some new hardware/functionality upgrades with the latest generation.

With the Pro X, you get a similarly dense (from a pixel per inch perspective) glossy display with up to 410 nits of brightness, but when you line it up alongside something like the iPad Pro, you do miss the amped-up brightness levels and the support for HDR content. The keyboard on the optional Type Cover is classic Surface levels of travel and ease of use, but what I really liked was the new Slim Pen which packs in all the functionality (drawing, notes, erasing, quick functions and 4096 levels of pressure sensitivity) of the Surface Pen with the all-new stowaway design if you pick up the keyboard and pen combo. Pricey add-ons though, if you want to complete the laptop experience. 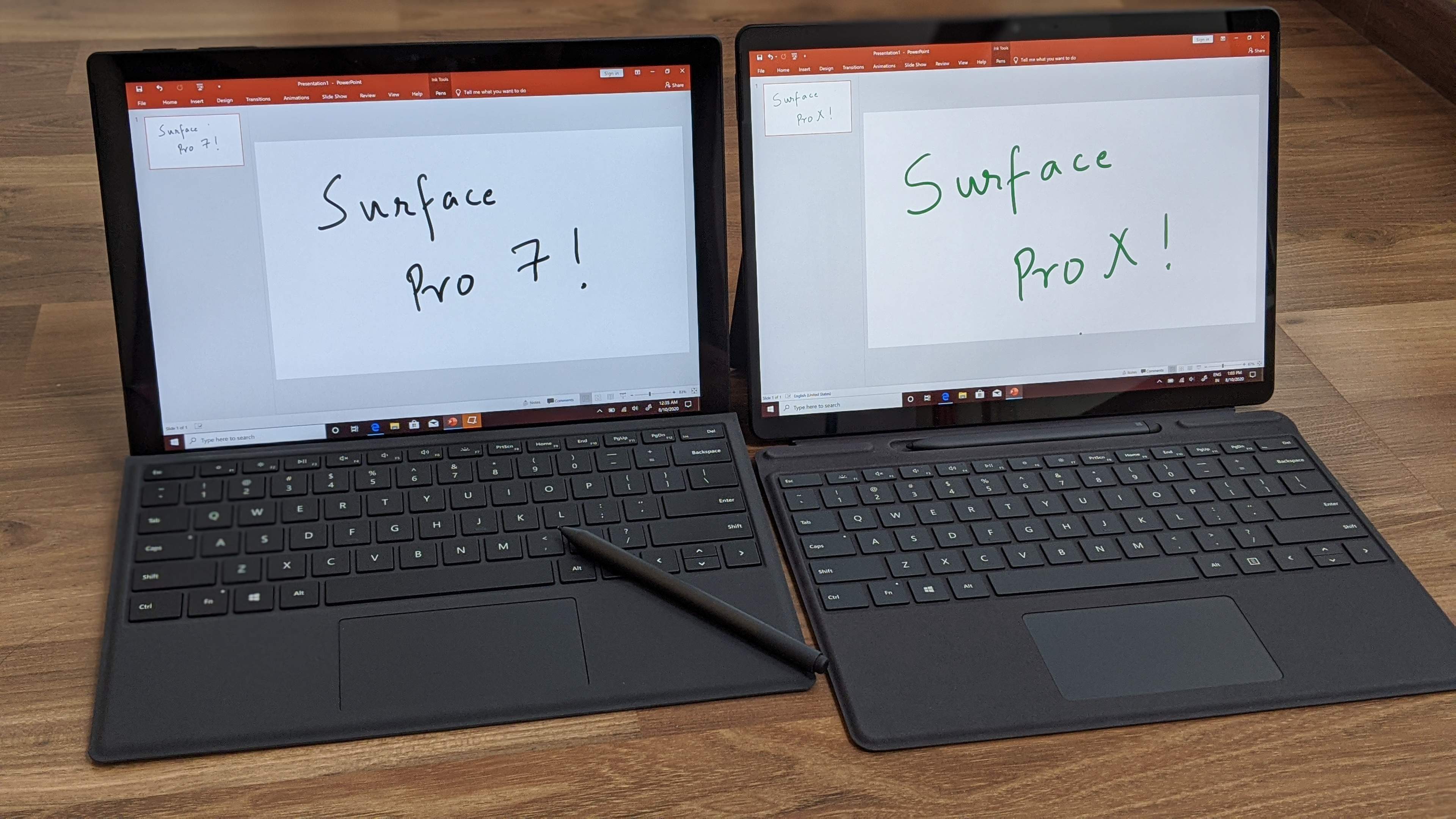 The Surface Pro 7 is kitted with what one would typically expect of the Surface lineup – Intel’s 10th generation Ice Lake CPUs with Core i3, Core i5 and Core i7 options with up to 16GB of memory and 256GB of storage – and the one I tested was specced with a Core i5-1035G4 chip with 8GB RAM, 256GB storage and Intel Iris Plus Graphics (Rs 116,999). In daily use, which included web browsing, streaming OTT content and music, Word/PowerPoint and a light amount of image edits, the device was plenty fast and impressive considering the form factor and design that delivers this performance. You can game a bit on this, as long as you’re a fan of casual games, anything modern that pushes hardware will lag badly or not start at all. Compared to laptops in its price range, the Pro 7 is outclassed for creative or gaming needs but should work plenty well for folks looking at everyday productivity applications and general use. 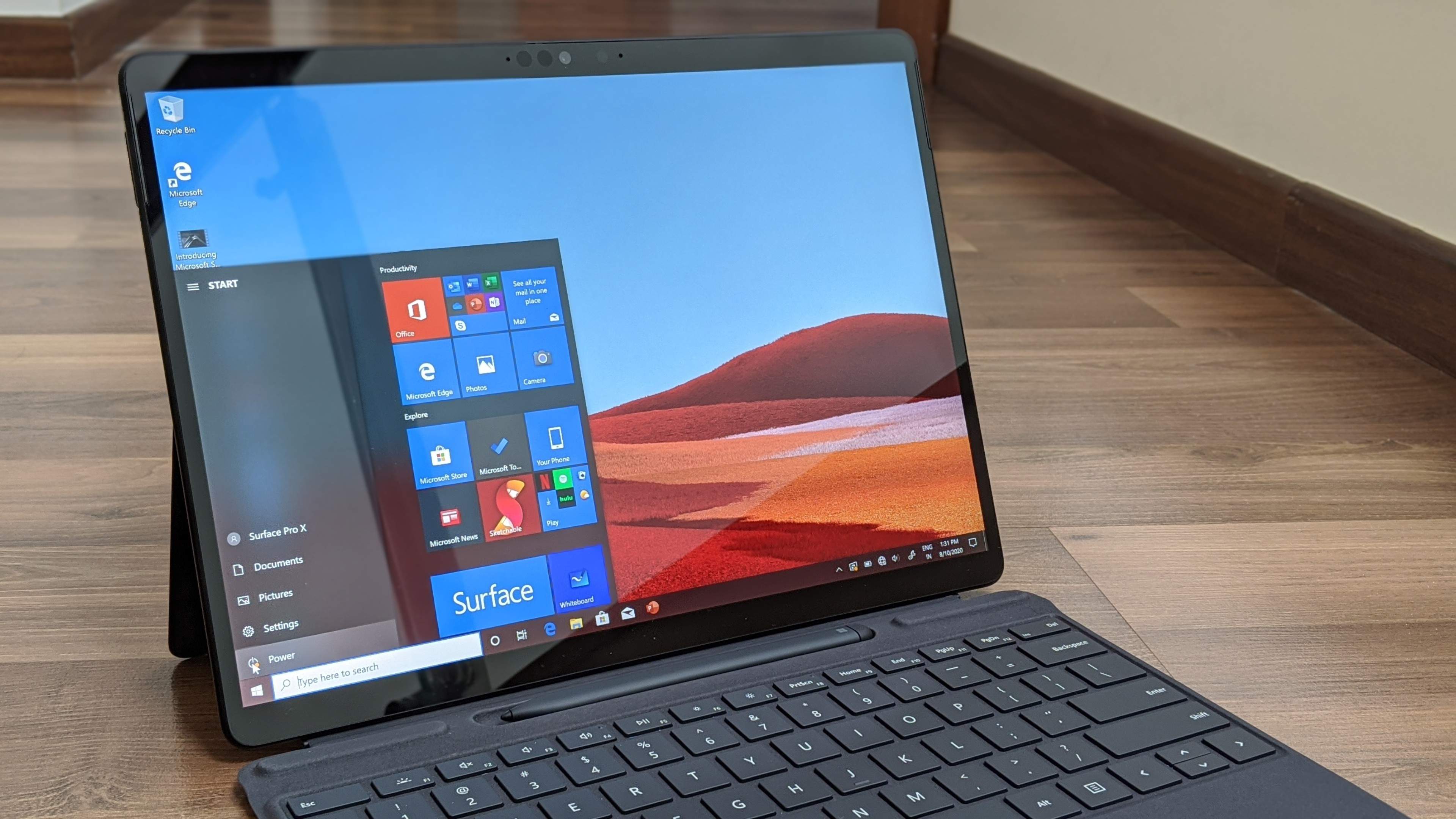 The Surface Pro X is a whole new kettle of fish. Unlike any Windows-based laptop of note, the Pro X runs on a custom Microsoft SQ1 processor which is based on the ARM architecture instead of Intel. You could liken the change to taking the engine out of a car and putting it into another car – it’ll likely work but there will be teething issues. With the SQ1, Microsoft has worked with Qualcomm to reduce the performance compromises that the battery-focused ARM chips deliver, and while Windows runs fine on the new hardware, there’s a broader issue with app compatibility.

With most app developers releasing separate 32-bit and 64-bit versions of their apps, a Windows on ARM PC like the Pro X will run the 32-bit Intel apps via an emulation layer, but 64-bit apps will need to be ported to ARM’s 64-bit architecture to run on the Pro X. Bottomline (minus all the tech gobbledygook), some apps work, while others work via an emulator and can be sluggish. Your mileage can vary, depending on the apps you use on a daily basis. It’s not ready for the prime time just yet, even though Microsoft has made big strides in making Windows 10 itself work seamlessly on the ARM chip. Unless you have exceedingly simple demands from your PC (and this should certainly give power users some pause), you’re going to run into some issue or the other with the Pro X. Particularly when you’re paying nearly a lakh for your troubles.

While Surface Pro 7 yielded around 7-8 hours of mixed-use, pushing it further with anything intensive like batch photo edits will bring this down to around 5 hours, no better or no less than the previous generation. The Pro X is slightly better at around 9 hours of use (with the more battery efficient chip), but the SQ1 is geared towards performance and not the 20-hour battery life Microsoft originally envisioned for Windows 10 on ARM, so we’ll have to wait for truly “all-day-and-night” battery performance.

The Surface Pro 7 is an iterative upgrade, both design and performance-wise, to the Surface Pro lineup and shows off Microsoft’s maturity in marrying the software and hardware experience. The form factor and the almost-mandatory accessories are premium priced, so when you’re all said and done, your wallet will be a lot lighter. The Pro X is a strong showing for Windows on ARM, but one that I’m afraid will need more time for app compatibility issues to settle down. One for the enthusiasts looking to experience the Windows future on ARM.

Tushar Kanwar is a tech columnist and commentator, and tweets @2shar.