There was a time, not so long ago, that truly wireless earphones were a novelty, and the AirPods were the only real game in town. And then, seemingly overnight, the floodgates opened, and Indian consumers were awash with more options than one’s ears could sanely review! Sony had an early head start way back in 2017 with the WF-1000X but concerns over connectivity and battery life stopped Sony in their tracks earlier than they’d have preferred. It’s taken Sony three long years to get its mojo back, and the recent WF-XB700 and WF-SP800N models we’ve reviewed clearly suggest that the time the brand has taken to go to market has been put to good use.

Yet, it’s with the crown jewel of its lineup – the WF-1000XM3 – that Sony faces its biggest challenge. Before you say it, yes, Sony’s naming scheme leaves a lot to be desired and yes, this device lands on Indian shores a year after its global release, which is an eternity in today’s launch cycles. The good news is that Sony’s packed a lot of impressive features in its diminutive size, but it goes up against formidable competition in the Apple AirPods Pro and Sennheiser’s recently updated Momentum True Wireless 2. How do the WF-1000XM3s fare, and are these the pair of premium true wireless earphones you should splurge on? 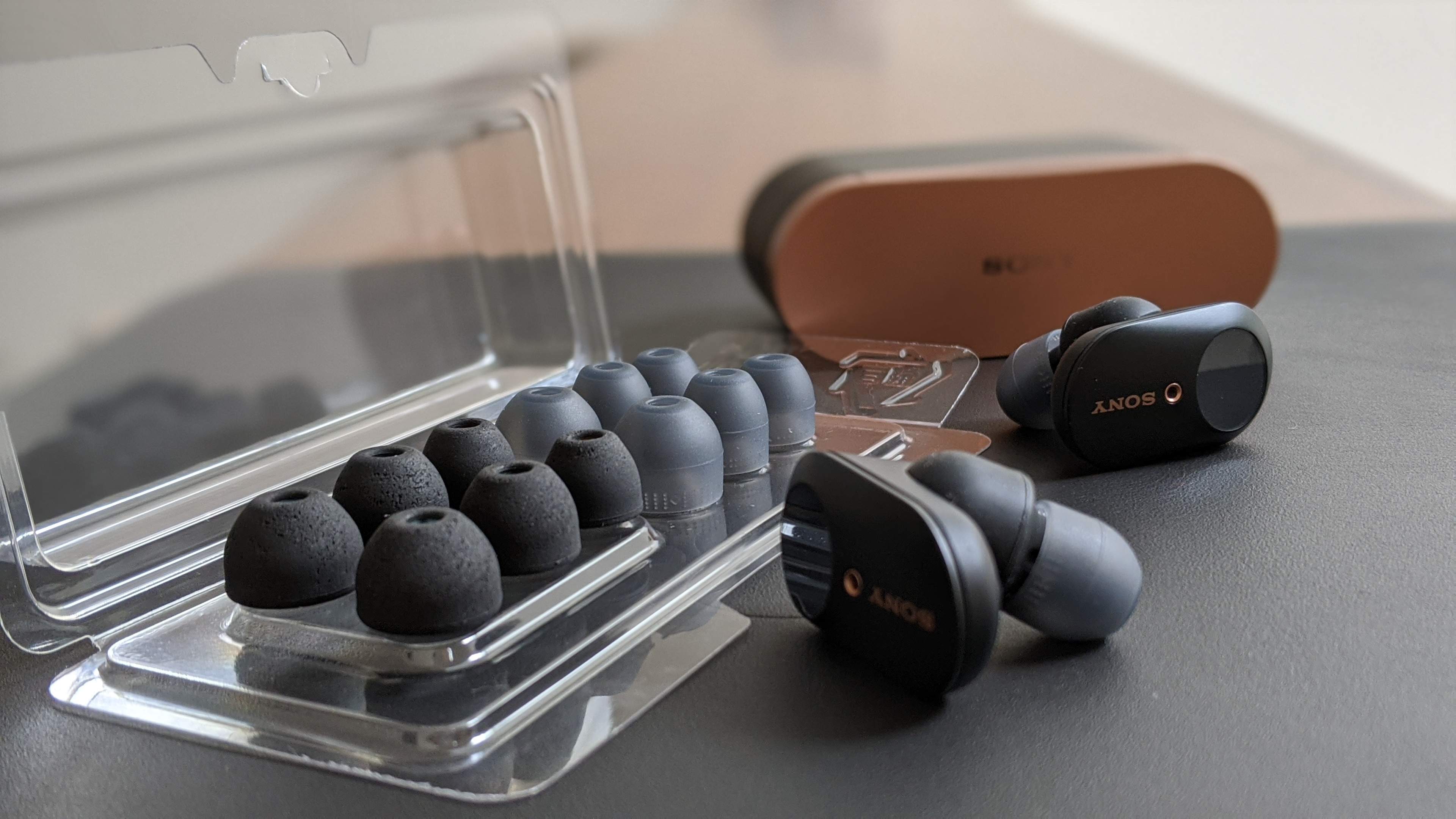 There’s an understated sort of elegance about the WF-1000XM3, particularly in the copper and black dual-tone finish that I reviewed. Part of the appeal, both functional and aesthetic, is the lack of protrusion when worn - they’re neither bulky not do they stick out like the AirPods Pro. Pushed into place, the WF-1000XM3s stay in place and, at 8.5g each, are super comfortable for extended wear. Sony has implemented what they call a ‘tri-hold structure’, which rests the earphones on three key points in the ear for better support, while still leaving the barest of gaps to allow for air circulation. Couple that with the seven different sizes of buds, and you’re sure to get a fit you’ll like. In my slightly asymmetrical ears, I picked one of the many buds till I found the one I liked for each ear. Once in place, the fit inspires confidence that you won’t be losing one of these buds when you’re out and about. 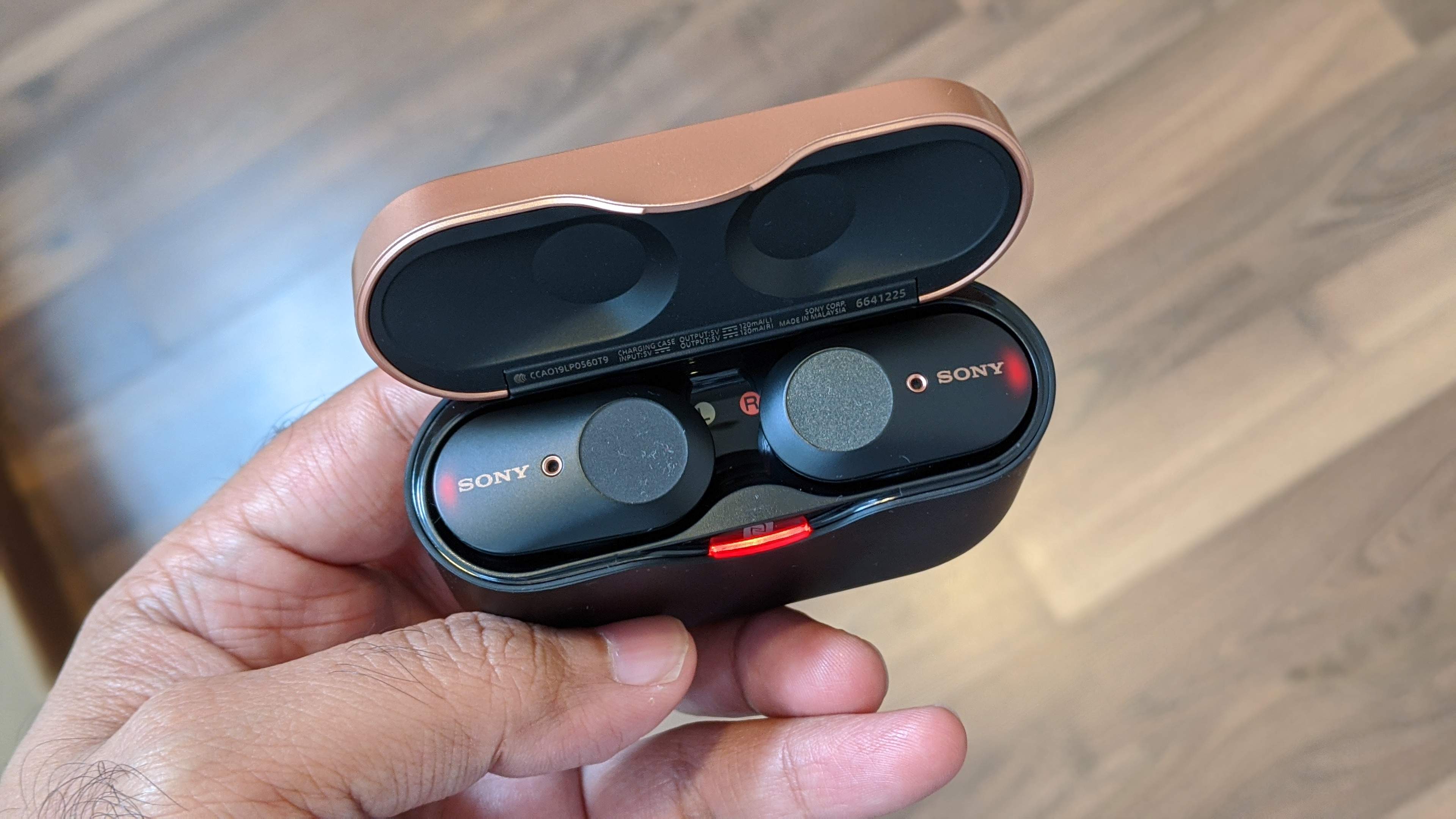 As with all truly wireless buds, these come with their own charging case, which I found to be fairly chunky compared to the one on the AirPods Pro. It affords the buds three full charges if you’re using them with noise-cancellation turned on – typically one saw around 6 hours of use with noise-cancellation turned on, and almost 8 without - and a quick charge mode that juices them up for an hour’s worth of use in just 10 minutes. No LED indicator for battery level, though.

Just bear in mind, these are not sports-oriented buds (like the WF-SP800N I reviewed), primarily because they don’t offer any sweat or water resistance. This bit was a little puzzling – if you’re ready to spend this much cash on a premium pair of earphones and have to pick a pair which doesn’t sound as good simply because it offers water resistance, is a choice one shouldn’t have to make. 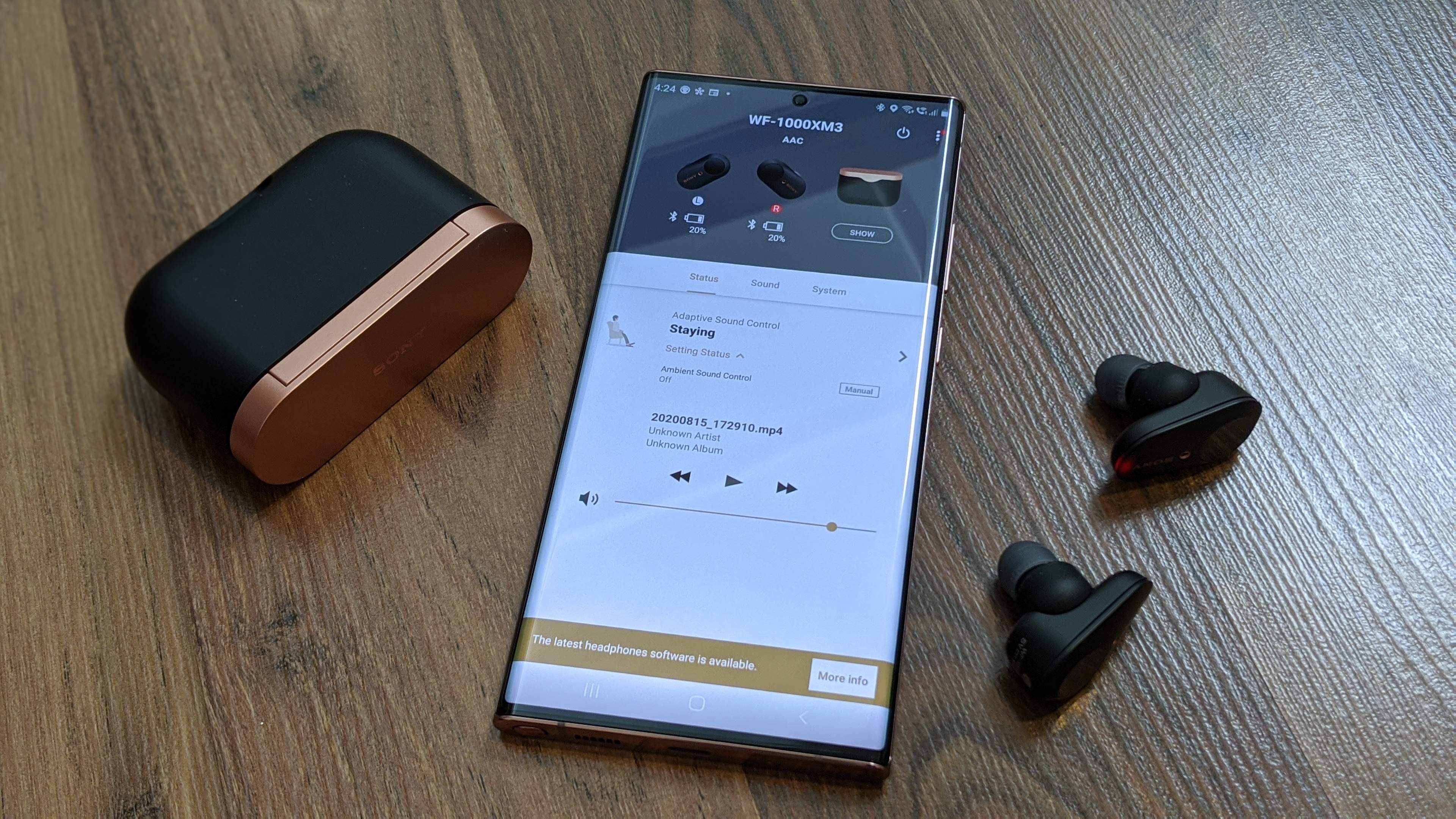 Powering the buds is the Sony QN1e noise-cancelling processing, which is largely similar to the one you’d find on the extremely popular over-the-ear WH-1000XM3 headphones (see what I said about Sony’s naming schemes?) and allows for better noise-cancellation capabilities and better battery life. You get support for SBC and AAC audio codecs, but there’s no aptX HD Bluetooth support, which is a clear miss. Connecting to the buds, one highly recommends using the Headphones Connect app to control equalization functions, enable smart assistants and configure the touch controls on the earbuds (pro-tip: set the Sound Quality Mode to prioritize sound quality instead of Bluetooth connection). Speaking of which, the touch controls are implemented rather well, and are simply not fidgety like one has seen on way too many headphones. You can use touch controls to control music playback on the one ear, while the other can handle noise cancellation, turning on the Ambient Sound mode or enabling Quick Attention to hear someone speak to you without taking the buds off. 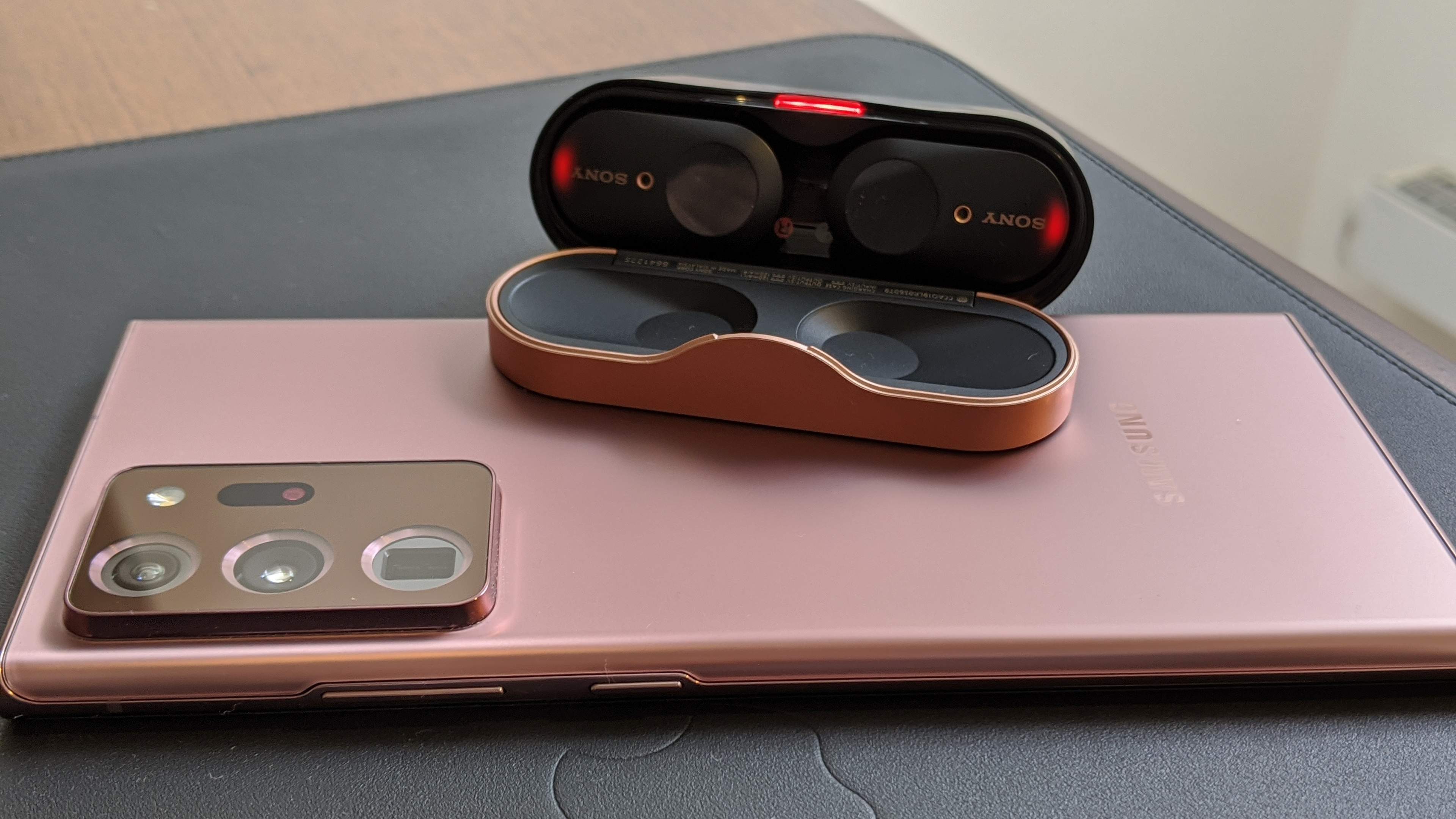 But you’re not going to splurge twenty grand on something that doesn’t sound good, right? The WF-1000XM3s redeem themselves completely in this department in the manner of sound they pump out. Sony’s balanced audio signature (as compared to the bass heavy SP800N) produces audio that shines across the frequency range. No matter what you’re listening to – delicate Hans Zimmer scores, powerful Rahman numbers or some good old Bollywood - the sound is a near-perfect representation of what the creator intended for you to listen to. Clean treble, thumbing bass and a defined mid-range, with a decently wide soundstage for a pair of tiny cans – Sony brings its A-game with this pair, and how! The sheer dynamism of the music is hard to fault in a bigger pair of headphones, leave alone something this tiny. What makes even average quality tracks shine is the noise cancellation on the WF-1000XM3s, and the manner in which these buds manage to block out the constant whirr of the fan or the distant hum of a generator is impressive. That it manages to do this without creating that uncomfortable vacuum in your head is even more so. 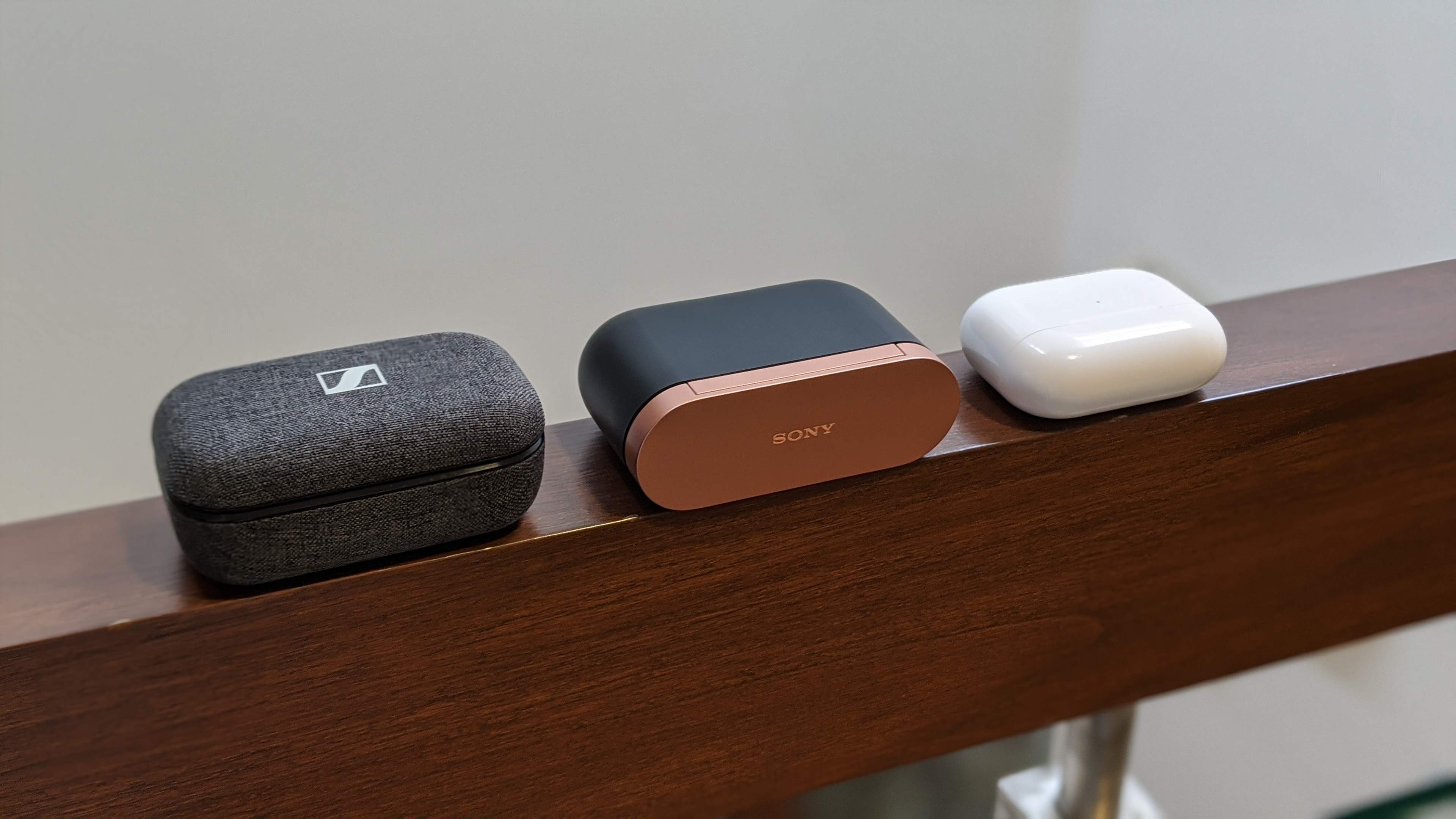 As impressive as they are, the competition in the “flagship TWS” segment is truly fierce, and it comes down to the little details when comparing the XM3s with the Sennheiser and the AirPods Pro. Sennheiser’s buds support the aptX codec and come with IPX4 water resistance rating, while the Sonys sound livelier in comparison. AirPods Pros might still continue to appeal to iPhone users, but Sony edges ahead (for Android users at least) with a warmer sound and better noise cancellation than both. What might seal the deal is that picking up the Sony will save you a fair bit of money as well over both the Apple and the Sennheiser. Sony has truly pulled something special out of the bag with this pair of truly wireless earphones, one that you should spring for if you’re the sort who likes to kick back, shut the world out and enjoy your music!