I’m typing these words on Apple’s fancy new Magic Keyboard accessory attached to a 12.9-inch iPad Pro (2018) and boy, am I having fun! In fact, the Sound Check column and the Amazon Echo 8 reviews from earlier this week were typed on the Magic Keyboard as well, as were all the quick image edits and the in-betweens of getting work done. I’m even trying my hand at video editing in LumaFusion and cannot be more grateful for the comfort and precision that the Magic Keyboard’s trackpad allows me, and I could really get used to doing video edits on the iPad Pro without really missing the trusty old MacBook Pro, particularly when we start to venture out of our homes again. As solid a testament as any to the new Magic Keyboard for the iPad Pro, I hear you say? Should iPad Pro owners drop whatever they’re doing and rush out to pick up the most ambitious iPad accessory ever made? Well…I have some thoughts I’d like to share.

But first, let’s address the elephant in the room, the sticker shock of buying the Magic Keyboard for the iPad Pro. As well designed and transformative as it is (I’ll get to it in a bit), this is still a case with a keyboard and a trackpad. You’re essentially ponying up either Rs 31,900 for the 12.9-inch version I’m using, or a shade less (Rs 27,900) for the 11-inch iPad Pro (2020 or 2018) compatible variant. To put that in perspective, Apple’s entry level iPad costs that much. I say it again, the keyboard/trackpad case costs more than an iPad. You’re going to have to believe really strongly in the value this accessory delivers before you’ll think of plonking down this much cash.

If you’re looking for reasons, Apple delivers them in spades in the design of the Magic Keyboard. You’re almost instantly struck by how heavy the package is when you first lift it up, and once unpacked, the Magic Keyboard is actually heavier than the iPad Pro 12.9 itself! Coupled with the iPad Pro 12.9, they tip the scales at over 1300 grams – that’s heavier than a MacBook Air – so you’re really not saving any weight in the bag with this combo! This thing is built like a tank, but that heft comes with a sense of reassurance and sturdiness. There’s no lingering sense of doubt, no flimsiness or irritating flex in the case, and the fact that it suspends your iPad Pro above the keyboard secured purely by the magnets in the rear panel would typically give you pause, but one can safely say those fears are unwarranted. There’s no danger of the iPad Pro falling off, and there’s enough tension in the dampened hinge to keep the iPad locked in in whatever angle you choose, though that angle is limited between 90 and 130 degrees. On my lap, the iPad Pro sits very well balanced and thanks to the weight, isn’t top heavy and prone to tip back. I’m probably stating the obvious, but Apple’s clearly worked on getting the balance of the setup just right, and it shows. 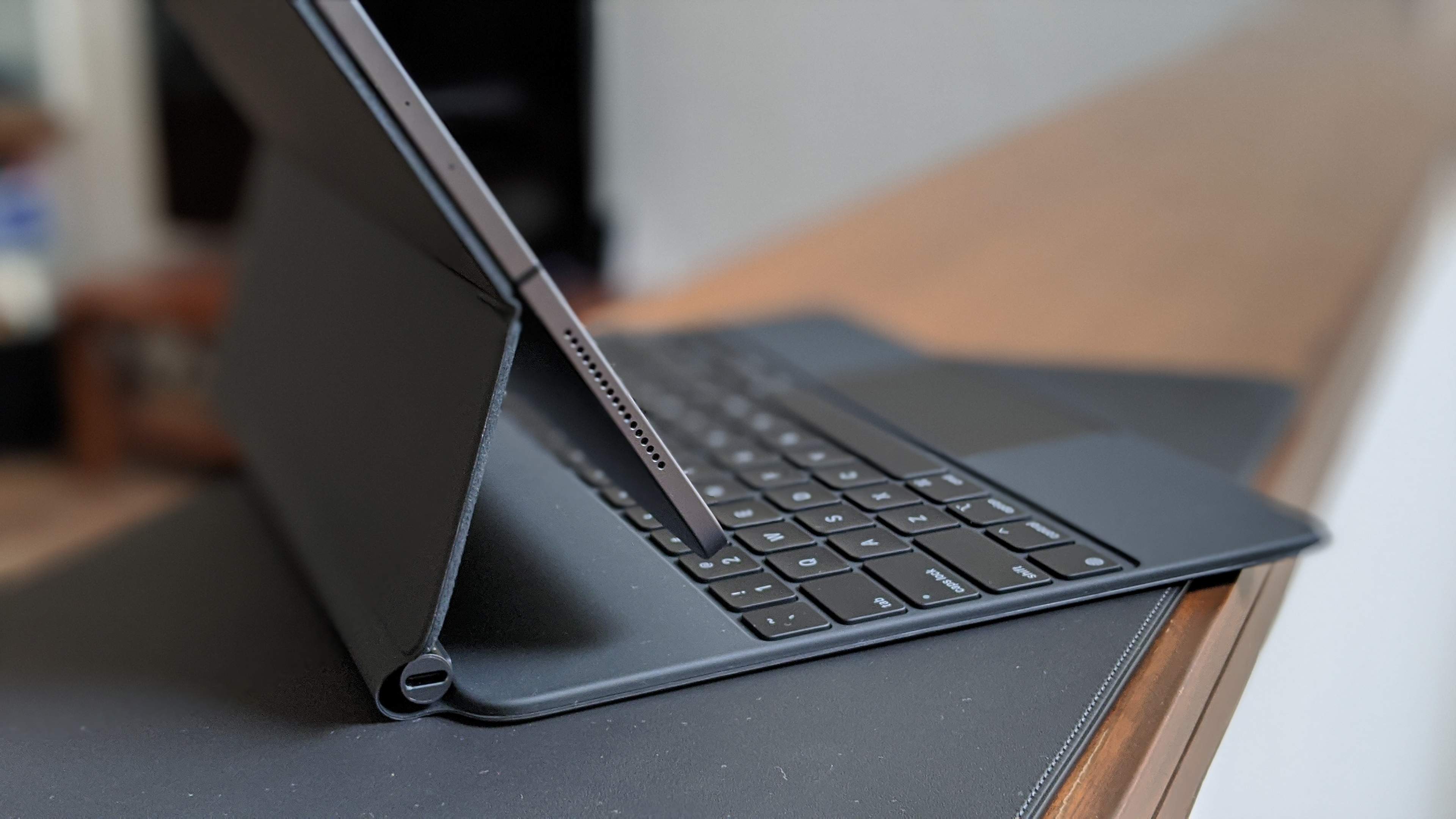 Some further notes on design. The material of the case is much like previous iPad keyboard cases, which means it does pick up fingerprints and the lint at the bottom of the bag, so I’d recommend a thin sleeve to keep it clean. The hinge that’s at the core of the floating iPad Pro effect only has so many degrees of movement, so you can’t push it all the way back if you want to, say lay the iPad Pro down flat for some sketching. No folding around itself like many 2-in-1 devices, either. The good bit is that even while the iPad is safely secured to the Magic Keyboard, it’s easy enough to quickly pull it off the case to use the iPad on its own. The only other quibble was that while the Magic Keyboard is powered by the iPad Pro, the single USB Type-C connector at one end of the main hinge only supports charging, which means you can’t attach a USB hub or external peripherals via the Magic Keyboard’s connector. Bit of a shame, this. 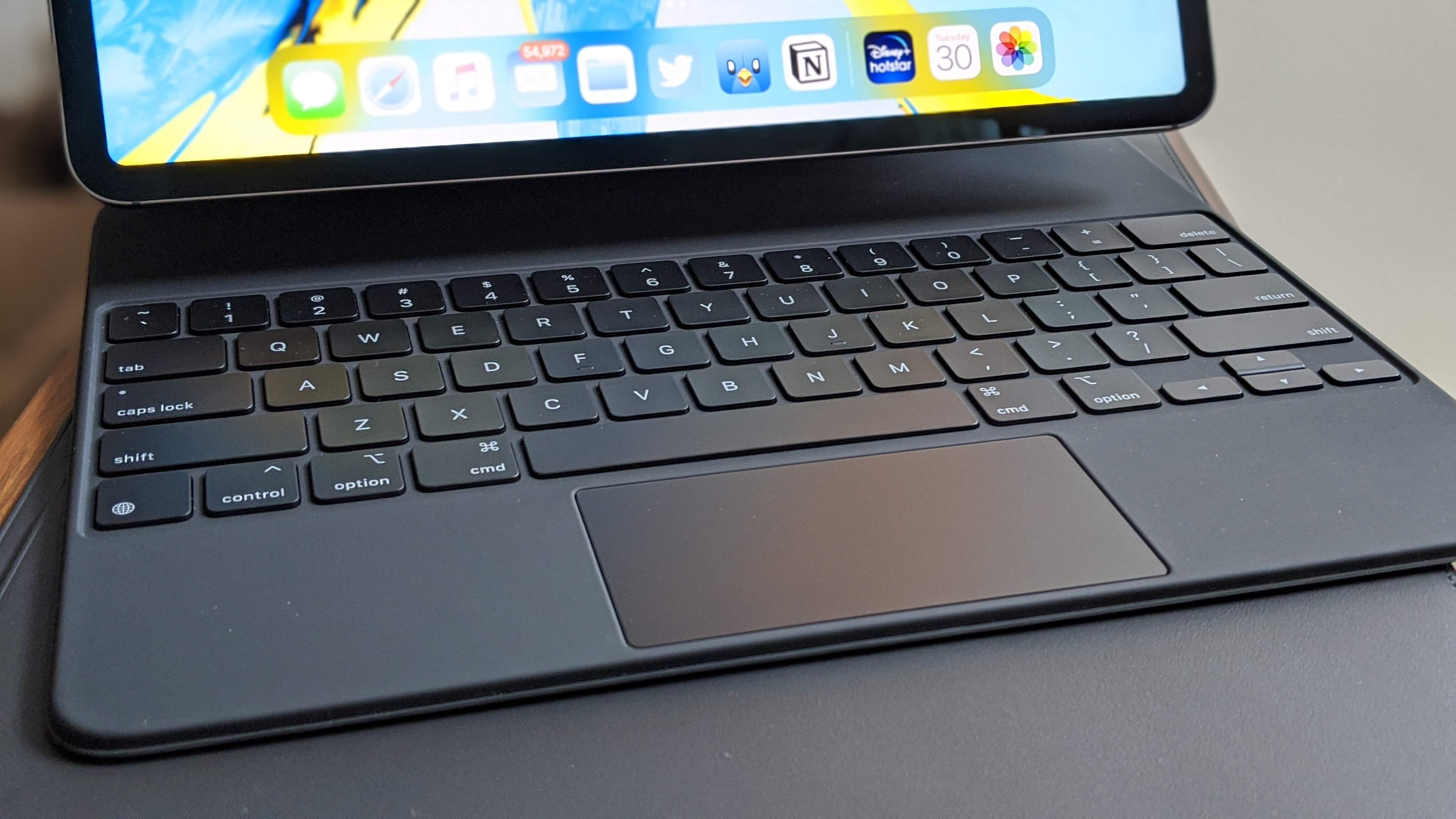 As enthralling as the design gets, the keyboard and trackpad are core to the experience, and whether you’re using it on your lap or on a desk, the typing experience has a pleasing laptop-like feel. With 1mm of key travel, the keys are stable and responsive and perfect for hammering out long reams of text. Decent sized keys too – I was up to my usual typing speed within minutes of using this keyboard. Want to type out a lengthy email? No problem! This is an excellent keyboard, period…and a good sign Apple’s bad keyboard days are firmly in the past. There were a few irritants, though. Ever so often, I was left wishing for a row of function keys above the top row for frequently used settings like volume, brightness, among others. The arrow keys on the keyboard were a little too small for my liking, and I don’t have particularly fat fingers. The keys are backlit, which makes a big difference when typing in gloomier weather *cough* Mi NoteBook *cough*.

Now, keyboard support has been around with the iPad since the early days, so it’s the trackpad that (rightfully) grabbed all the headlines at launch. Here’s the thing you need to know about the iPad’s implementation of the ‘mouse’. The trackpad is intended to add on to the iPad’s touch first user interface, and what it does is add an element of precision and control. For example, when you’re selecting some text on the screen, the trackpad obviates the need to touch the screen and still manage to be super precise with your selection - I cannot overstate just how much this capability alone makes the iPad Pro feel like a more serious work machine. The on-screen cursor goes from a blob to snap onto and highlight objects that can be interacted with, and as more and more apps add in more mouse capabilities, the initial hiccups I saw in some Google, Microsoft and Adobe apps should get sorted out over time. Folks used to large trackpads on their Macs might raise an eyebrow on the much smaller trackpad, but in use, I haven’t felt the size posed any issues while scrolling or while using one of the many multi-touch gestures on the iPad Pro. And here’s the thing - the trackpad is still far better than most of the trackpads I’ve used on Windows laptops, so there’s that. 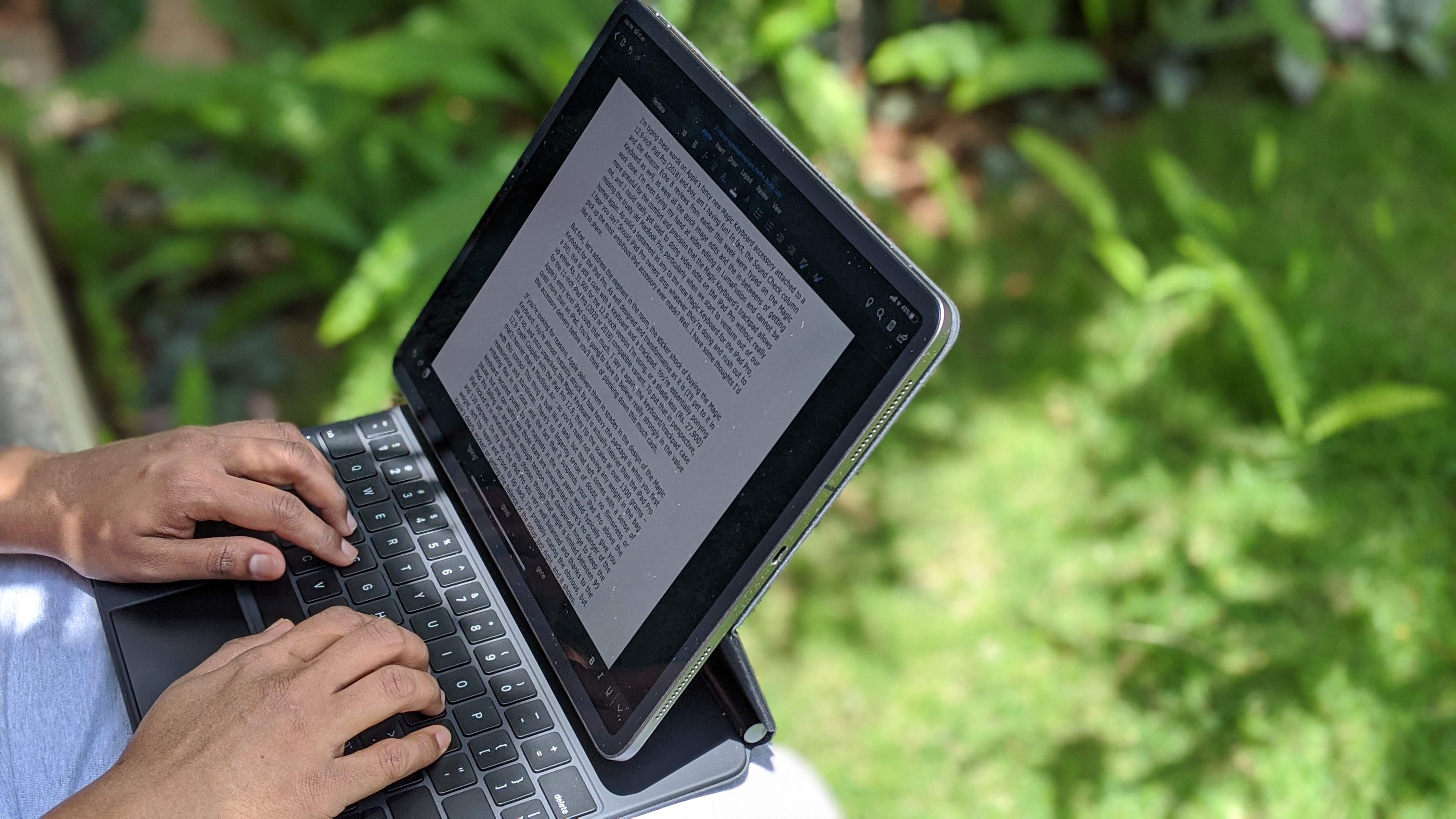 I said initially that this was a transformative accessory, and it truly is. It makes the iPad Pro come that much closer to being the real deal, a complete laptop replacement in every respect, plus all of the goodness you’ve come to associate with the iPad Pro. If your workflows are like mine – writing, browsing, image and video editing – the Magic Keyboard will reward iPad Pro owners handsomely, and you’ll likely stop picking up your laptop as your go-to device over time. Folks who sketch very often or want to use the iPad on its own a lot may find the design a tad limiting, and many others will be put off by the high price of admission.