ViewSonic X10-4K review: Convenience meets performance at the crossroads of design and tech

It took its time, but 4K has well and truly invaded our homes entertainment spaces, and even better, you no longer have to drop a bag of cash to bring in a 4K TV into your living room. 4K projectors, particularly portable ones that you can carry from room to room or along with you when you head to a friend’s place, slightly less so. You typically have to contend with either cheaper dinky little options with insufficient brightness and projection chops or others that top out at full-HD 1080p resolution and need a sound setup to complement the experience. Where does that leave the discerning buyer who’s willing to pay that premium for quality video and audio, while reaping the biggest benefit of a projector purchase – that massive cinema-sized experience? ViewSonic seems to have the answer, with the X10-4K UHD Short Throw Portable Smart LED Projector. As the ‘quite-a-mouthful’ name suggests, there’s quite a lot to unpack in the X10-4K, so let’s find out exactly what the grand Rs. 3.5-lakh outlay gets you.

Even if you don’t particularly care for this projector’s IF Design Award 2019 credentials, it’s fairly evident that the X10-4K is an incredibly stylish looking beast, almost uncommonly so for projectors in general. This is a product that’s designed to be front and center in your viewing experience, rather than something that’s hidden away in a corner. The finish is a minimalist, classy, gun-metal grey, with smooth curves and mesh grilles on either side for the in-built Harman Kardon sound system. The front is all about that centrally mounted lens, though there is a built-in infrared sensor and a couple of projector rarities - an autofocus sensor and an eye-protection, with the latter detecting kids or pets standing right in front of the projector and blanking out the image to prevent blasting your eyeballs with the insanely bright light the projector emits. Neat. 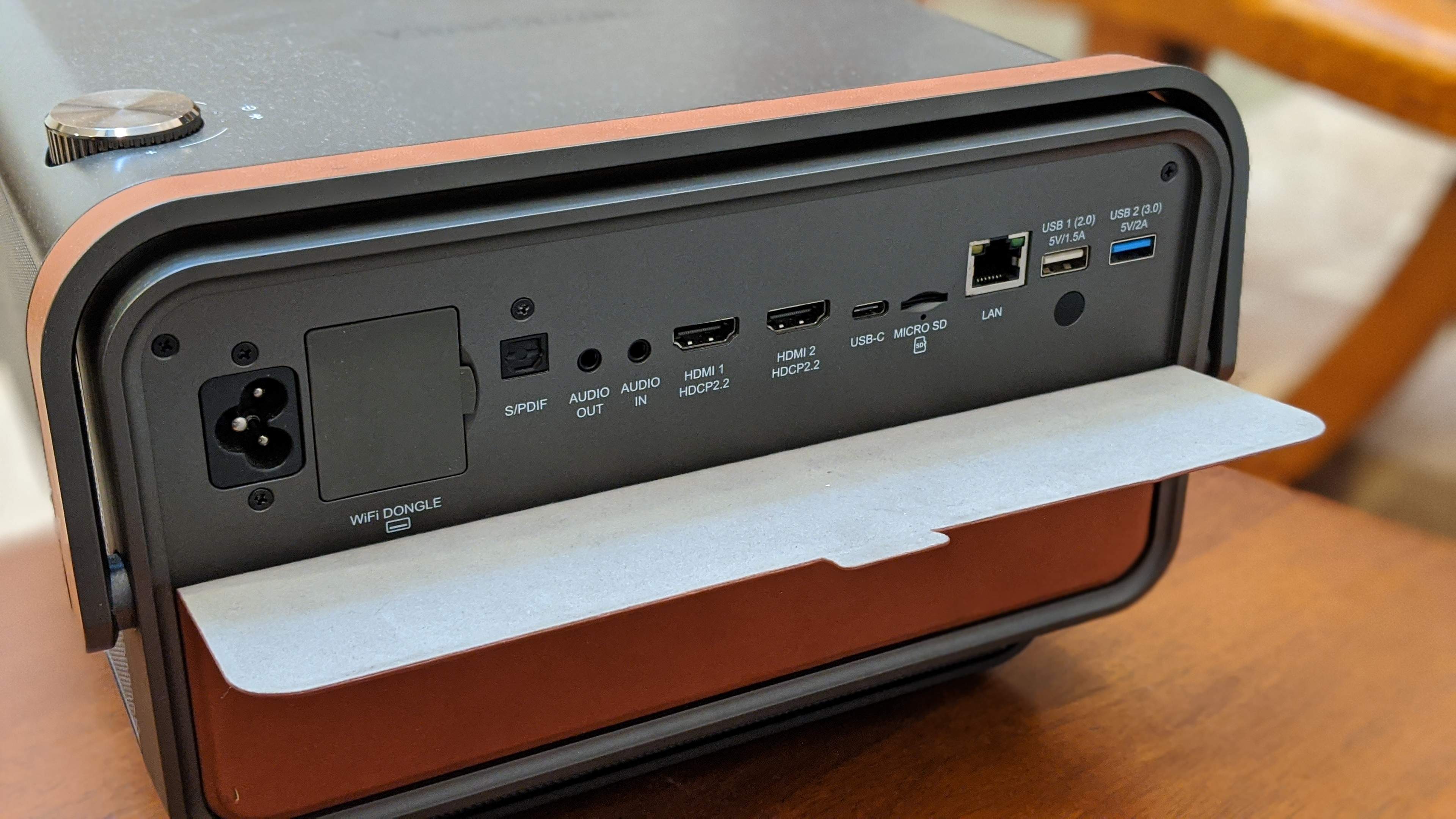 Around the rear are a host of connectivity options – two HDMI 2.0 inputs, Bluetooth 4.0, a Type-C for plugging in a video source, a microSD card slot, a 3.5mm audio jack, two USB ports (one 3.0) and SP/PDIF and 3.5mm audio out. Interestingly, there’s an Ethernet port for wired connectivity, but most will use the Wi-Fi dongle which slots in behind the removable flap to connect to 5GHz networks. The top is rather bare, with a single knob that doubles as a power button and a volume control, and most control is relegated to the included backlit remote.  With quick functions for autofocus, network and general settings and volume control, plus a rotary whel for navigating the on-screen interface, the remote took me very little time to get accustomed to. A handy addition for a projector making claims of portability – a retro chic handle folds out from the rear so you can lug the 4.1kg projector from room to room, and there’s a matching iPad-style, magnetically-attaching leather cover for the ports on the rear. The effect is overall very premium, about right for the asking price! 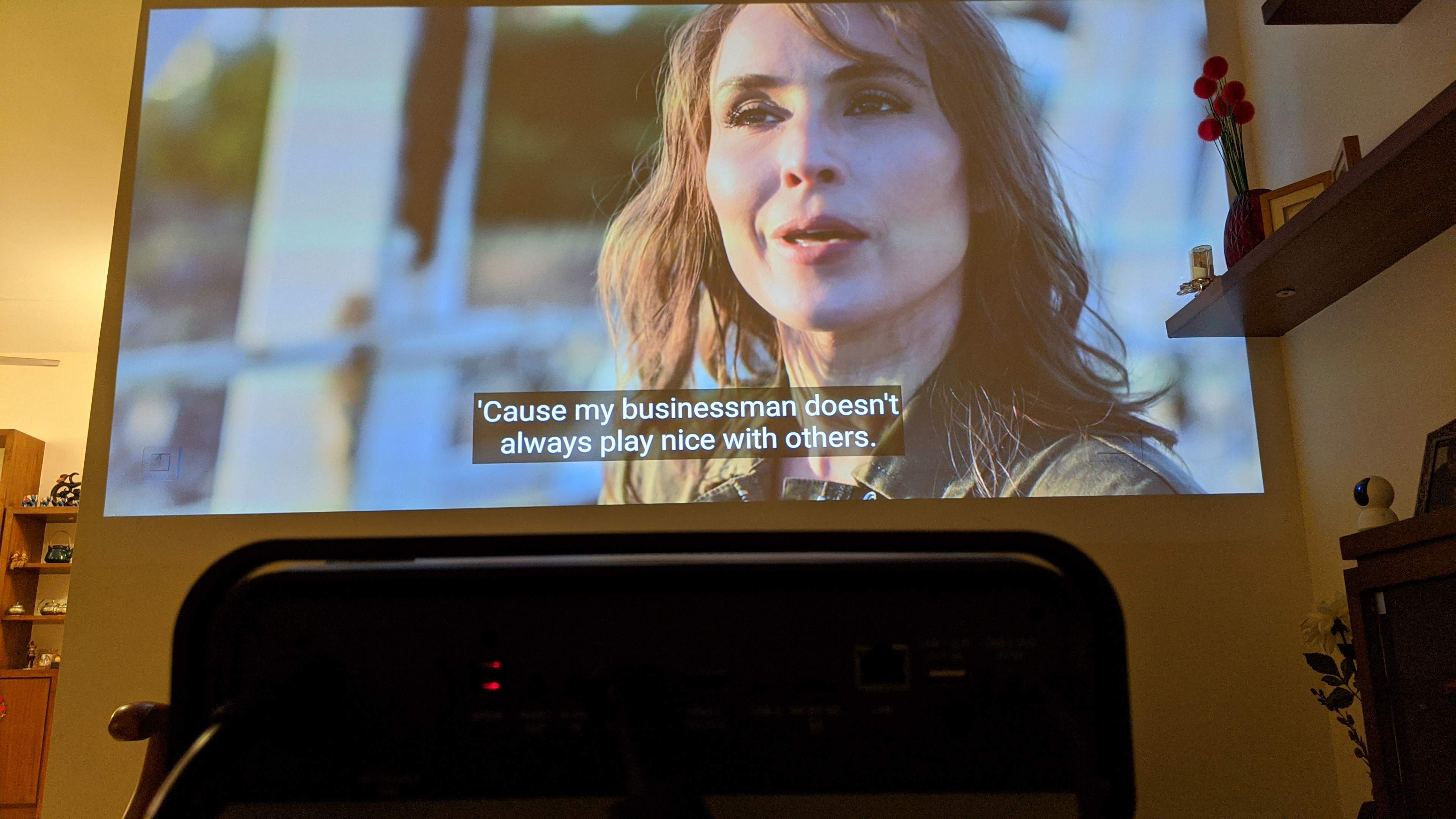 Getting the projector up and running was a cinch - setup was easy, and you can use the Aptoide app store to bring down native apps for content sources. The interface is a tad clunky visually but is very full-featured, so no major complaints on that front. For the most part, you’d probably plug in an Apple TV 4K or a FireTV Stick 4K and not have to use the projector interface beyond the basic settings and control. At 2,400 lumens, the X10-4K is bright enough to use with some amount of ambient light, but a darkened room obviously works best. There was one issue I encountered early on. Aside from the limited front tilt control via the flip-down leg, the projector has what is called a fixed 0.80 throw ratio, so you manually have to move the projector to size the image on the wall. Sure, the auto-focus feature, which is the first I’ve seen on a projector, adjusts the focusing on the wall auto-magically, the projector is capable of a 200-inch image given the right distance, which means you’ll have to bring the projector in closer if your viewing area doesn’t get that large. Projector aficionados may note that the projector has no vertical or horizontal lens shift finetuning, so you’ll have to get the centering and overall positioning right before you can revel in the experience. Now, you should know that the X10-4K uses a single Texas Instruments DLP 4K chip with XPR tech to generate the projected image, which means the projector projects four 1080p images in quick succession, shifting the image ever so slightly to build up the total 8.3 million pixels that a 4K image requires. So, while it isn’t true/native 4K, you’d be hard pressed to tell the difference. Using a single chip also helps create a pin-sharp image that’s free of the alignment issues one has seen on three-chip projectors, and the LED light source lets you go much longer than a lamp-based projector, nearly 30,000 hours compared to the 5000-10,000 hours of normal use. The range of colors the X10-4K can project (color gamut) is about 125% of the Rec.709 standard, or about 94% of the DCI-P3 standard that is used for HDR10 content.

What does this translate into, in terms of performance? In a nutshell, you should be prepared to be sitting down when you first kick off a cinematic scene on this projector! No matter whether you prefer the fast 4K action scenes in Jack Ryan (Prime Video) or the unparalleled visual treat that is Our Planet (Netflix), the X10-4K rewards with a massive, immersive images that bring a cinema-like 120-inch+ experience to a wall near you. Playing back 4K UHD content is a visual treat, and if anything, the weak black levels and average contrast performance may trigger video purists, but these are both known weaknesses of DLP tech, so you should know that going into the purchase.

Even on standard definition content, the upscaled images are crisp, colors are deeply saturated and motion handling is on point. Forget just portable projectors, the image is good enough for many to consider this as a permanent solution, particularly if you’re cramped for space. Rounding out the experience is the real revelation in the package, the dual integrated Harman Kardon speakers, which are not just good enough for hurriedly cobbled together screenings but pretty darn decent for everyday use as well. Color me surprised; I really didn’t expect audio this good on a portable projector. But there’s the large matter of the price, and the X10-4K does well to justify its not-insignificant price point. Great design, packed to the gills with features and connectivity options, delivering a sharp, vibrant image no matter what the source plus some great audio to boot – that’s the X10 4K for you.