Ever since Steve Jobs pulled this impossibly thin laptop out of a manila envelope, the MacBook Air has, with its wedge-shaped all-aluminum design, been the source of inspiration for an entire segment of thin-and-light laptops…and a standard by which every entrant was measured. It became a raging success, selling units even in years when Apple let the Air stagnate while the rest of the portable lineup was updated to higher resolution Retina displays. And when the Air did finally get the long-overdue Retina display update in 2018, it was hobbled somewhat by a divisive and occasionally unreliable butterfly keyboard, even as the competition swirled around Apple with increasingly credible offerings. Recommending Apple’s most accessible Mac got tougher by the year.

This is why the 2020 MacBook Air excites me to no end, as Apple finally puts the missing pieces in place – a new scissor-switch keyboard with improved key travel, Intel’s latest 10th-generation chips, and more storage even in the base variant. Does the MacBook Air earn the ‘default Mac’ recommendation one would have hesitated to award it the past several years? Let’s get into the nitty-gritty and find out. 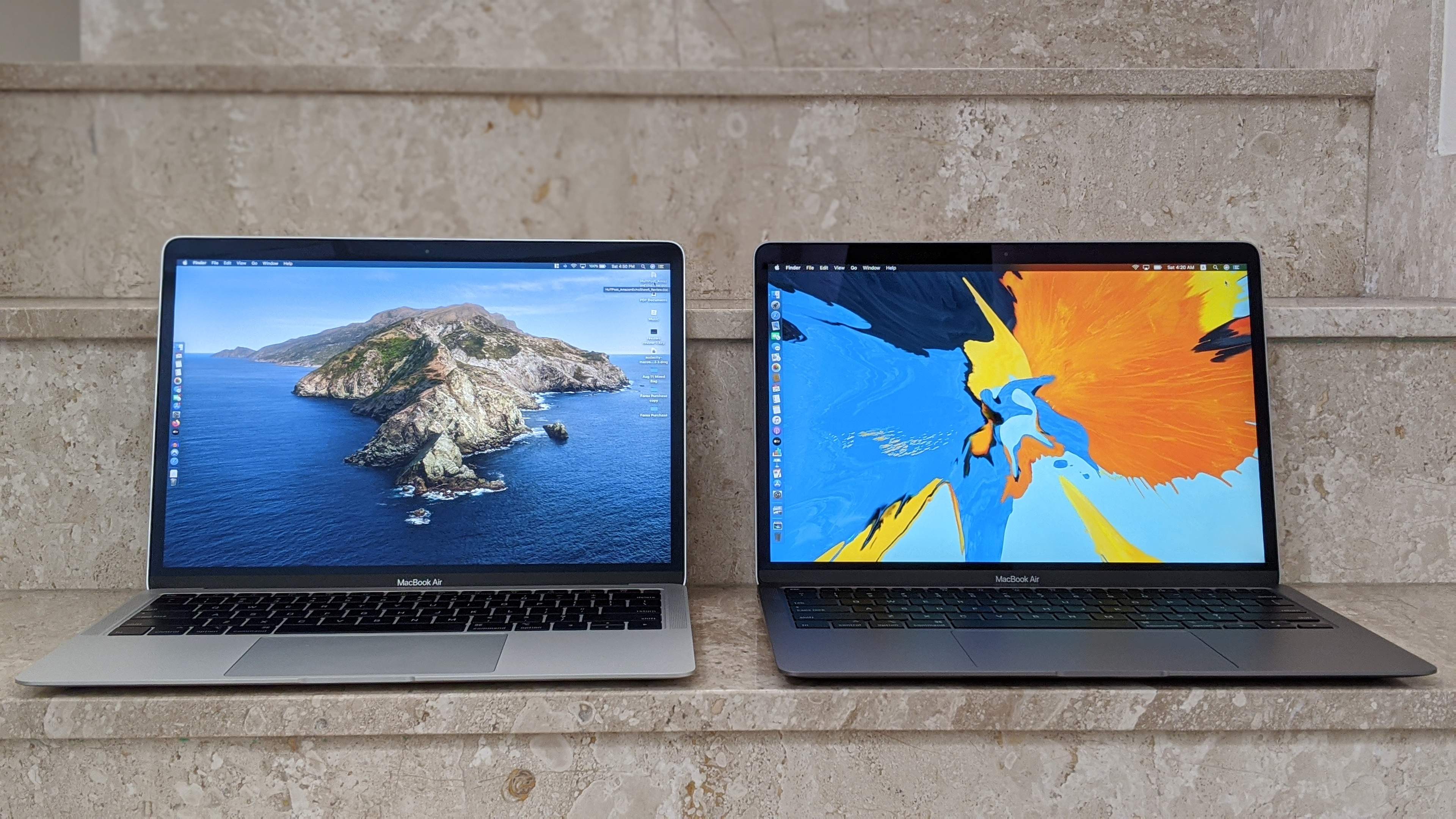 Sitting the 2020 MacBook Air down by the 2018 refresh, the look is nearly identical and Apple clearly took the “if it ain't broke, don’t fix it” path in retaining the iconic brushed aluminum unibody design. It offers the same premium feel and build quality, although some might miss the light-up Apple logo of yore. If you’re one of the many who’ve doggedly resisted upgrading from an older pre-2018 MacBook Air, you’ll find it way more tightly designed and modern, and the step up to the 13.3-inch, 2560x1600 pixel Retina display alone will be worth it. You get Apple’s True Tone tech which adapts the display’s color temperature to that of the ambient light, but the Air’s maximum brightness tops off at around 400 nits, which is good…just not great. Folks looking for brighter or more colour-accurate displays say, photographers or video editors, should look at the MacBook Pro or the Dell XPS 13 (both 500 nits with excellent coverage for DCI-P3/Adobe RGB color gamuts). Also, if you’re coming from the Windows side of the world, this doesn’t have a touchscreen, but with the iPad Pro getting more computer-like features, I’d wager the ‘touchscreen Mac’ ship has long sailed. Overall, it may not be a big design leap – I’d argue the 2018 refresh still looks great – but it is 0.5mm thicker and 40g (1.29kg) heavier than the previous generation, which comes down to extra space afforded to the new keyboard. Still easy to slip into a backpack and carry around everywhere…when we get back to traveling, that is. 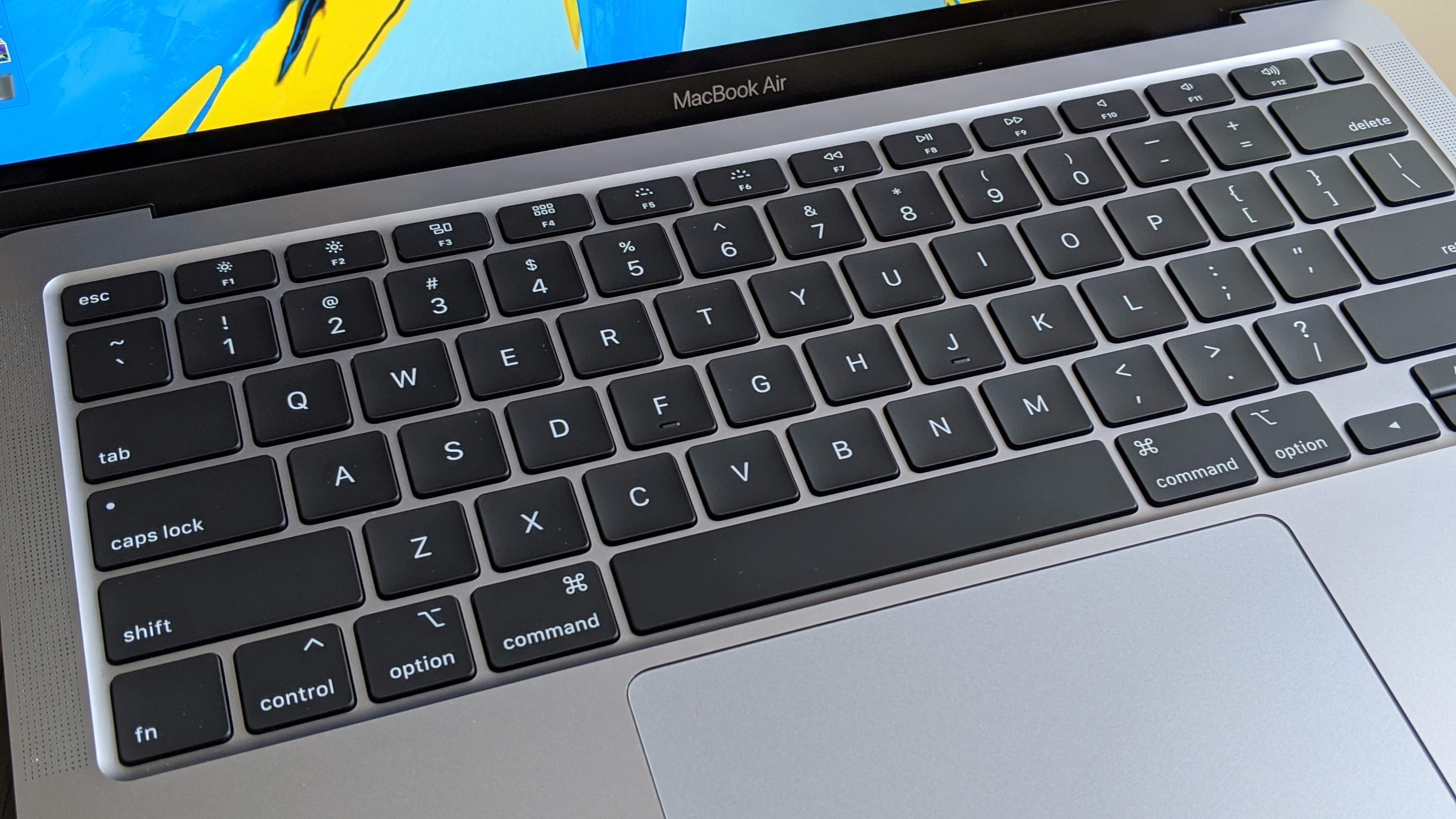 About the keyboard, the real reason why I suspect most of you are here reading this piece. The MacBook Air comes equipped with the new Magic Keyboard (first seen on the 16-inch MacBook Pro), which feature redesigned old-style scissor switches with 1mm of key travel. Compared to the previous butterfly keyboard (0.7mm) which felt extremely clackety and lacked a good sense of feedback no matter how much time I spent acclimatizing, the difference in typing experience is immense and super comfortable. I’m also in the camp that prefers the standard top row and function buttons (including physical volume and brightness keys, and a TouchID button for authentication) on the Air to the Touch Bar keyboard on the 16-inch MacBook Pro. This is a solid return to form for the Air’s keyboard, and just one of those things Apple should have (and could have) fixed sooner. It’s here now and boy, am I glad Apple’s switched to this keyboard across their lineup! Coupled with the wide and smooth trackpad, using the Air is back to the glory days of the original Air, and I can imagine a lot of folks will breathe a sigh of relief on account of these changes.

Under the svelte exterior beats Intel’s latest 10th generation chips, and the base version has 8GB of memory and a 256GB PCIe SSD, up from the base 128GB from last year. The version I tested had a quad-core Core i5 with 8GB of memory and a 512GB SSD, plus you can take this all the way up to a quad-core i7 CPU, 16GB of memory and a 2TB SSD via Apple’s Authorized Resellers. With fast LPDDR4X memory and snappy SSDs faster, the MacBook Air delivers solid performance for everyday tasks, and even manages the odd Pixelmator photo-edits without the fan spinning up too much. If you’re a power user looking specifically at the Air instead of a MacBook Pro, you can have to make some adjustments to your workflow. The usual cocktail of everyday apps does just fine – streaming some tunes on Apple Music, checking email, watching a bit of Netflix, running a bunch of tabs on Safari – but if you’re biased towards the resource-hog Chrome is, running about 20 tabs will slow things down. Video editing is another area where the integrated Intel Iris Plus graphics just don’t cut it, as is any amount of gaming. macOS 10.15 Catalina is well optimized to this hardware and keeps things running along swimmingly.

Battery life is another area where the MacBook Air traditionally scores, and while I haven’t been able to meet the 10-11 hours claimed battery life, I’m the sort who doesn’t aggressively dial down my settings to achieve the optimal battery life, particularly when I’m locked down at home and within reach of a charger at all times. With full-screen brightness and lots of apps running through a typical day, I get about 7-8 hours on one charge of the 49.9‑watt-hour lithium‑polymer battery, which is decent, if not downright insane 21-hour Dell XPS levels! On the connectivity front, you get dual-band Wi-Fi ac and Bluetooth 5.0, but you only get two USB Type-C (Thunderbolt 3) ports on the left and a lone 3.5mm headphone jack on the left. Sure, you can run one 6K or up to two 4K external displays through the Type-C ports, but sooner or later, you’ll need to invest in a Type-C hub to give you some breathing room and the regular ports for HDMI, USB Type-A and maybe Ethernet or SD cards. And of course, there’s that the one flaw that the Air shares in common with the MacBook Pros – a low-resolution 720p webcam – which captures grainy video even in properly lit environments. In our increasingly work-on-Zoom work environments, this is a serious miss. And while I’m raining on Apple, maybe add the excellent FaceID from your iPhones/iPad Pros into your laptop line as well?

So, should you pick one up? The MacBook Air has a lot going for it, without any significant ‘buts’. Design is still slick and modern, and the keyboard and trackpad are back to their winning ways. For the first time in several years, I can happily recommend the Air to regular folks in the market for a Mac laptop, as long as you don’t expect to tax it with super heavy pro-grade workloads that the MacBook Pros are more suited for. In an uncharacteristically-Apple move, pricing is better than last year, and you get double the storage from the get-go. Of course, folks looking at the Windows side of the world will find a lot of options at similar points, but the ecosystem advantages for folks with iPhones or iPads are hard to beat.