Apple WWDC 2020 highlights: What was announced, and why it matters

Use an iPhone, an iPad, a Mac or even an Apple Watch? Apple’s World Wide Developers Conference has news you can use. Ostensibly a developer’s conference, WWDC is one of the most hotly anticipated tech events of the year, even for consumers. No, no shiny toys launch here, it’s all about the software that powers Apple devices, and on Monday, Apple showed off – via a virtual event streamed online - the next generation of features coming to an Apple-branded product near you soon. From moving away from Intel processors to significantly redesigned iOS 14 and macOS 11, Apple dropped several major announcements at the event keynote. Here’s my pick of the biggest announcements from WWDC 2020 and why they will matter to Apple customers in the months ahead. Read on – there’s something for everyone. iOS 14: iPhones get a dash of ‘YOU’
Apple gave us the first look at its iOS 14 mobile OS that will be coming to iPhones later this year, and the update delivers some significant visual changes that iOS users had been asking for, for years! Notably, the home screen now adds a new App Library view, beyond the regular grid of icons (which, in a first, you can hide if you don’t use that often). The concept is quite similar to the app drawer we see on Android phones, except that you’re not scrolling endlessly to find the app you need, instead apps are automatically grouped into categories like Social, Entertainment, Lifestyle and the like. You can further personalize your home screen with widgets of different sizes, so you can quickly access certain functions (like changing music) or get an at-a-glance update on things like the weather, right from your home screen. The really big deal is that for the first time, you can go beyond wallpaper choices to finally make your iPhone experience look completely unique to what you want. Other areas where Apple’s played catch-up include a new picture-in-picture mode, which allows you to float a movie/video over any app to keep watching your content while you reply to a message or add a to-do to your list. Speaking of messages, big updates here – pinned conversations to keep your favorite conversations right up on top, threaded messages and replies in group conversations, and the ability to “@ mention” someone in the chat. Both incoming phone calls and Siri will no longer hijack your whole screen when in use, instead they’ll appear as small overlays. Another interesting feature – App Clips – bite-sized versions of app functionality that is I personally think is just waiting for app developers to pick up and run with. And finally, it’s the little stuff – the ability to finally change default email and web browser apps, a new camera/microphone indicator each time an app is using either, and a new Translate app for on-device voice and text translations for 11 languages – that will breathe new life into iPhones 6S and later. 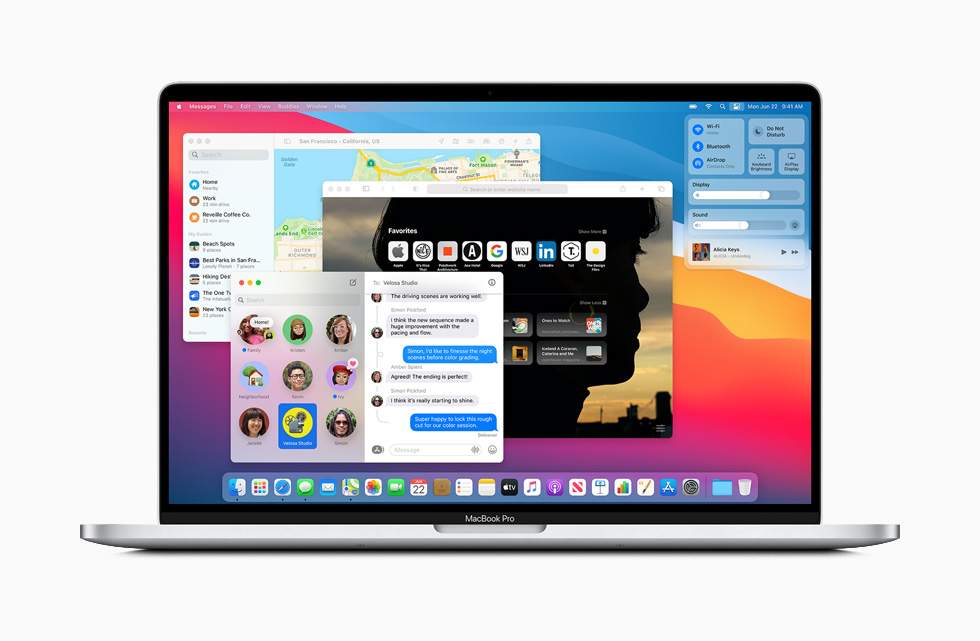 MacOS 11: Design and Extensibility Wins
MacOS’s next version – macOS 11 Big Sur – takes a big leap visually to come closer to its iOS and iPadOS brethren, with a cleaner, more spacious design and elements like Control Center for changing quick settings right from the desktop. Maps and Messages get all the capabilities of the iOS apps, thanks in large part to the Catalyst project, which allows developers to port their apps from iOS to macOS with little overhead. Big improvements were reserved for the Safari browser, with gains in speed and privacy features and the addition of extensions (available via the Mac App Store). With an easy migration path for developers to port their existing extensions from other browsers, you should expect to see a lot of popular extensions move over to Safari soon. If you’ve held off from using Safari due to lack of support for your favorite extension, expect that to change when macOS 11 hits a Mac near you later this year. 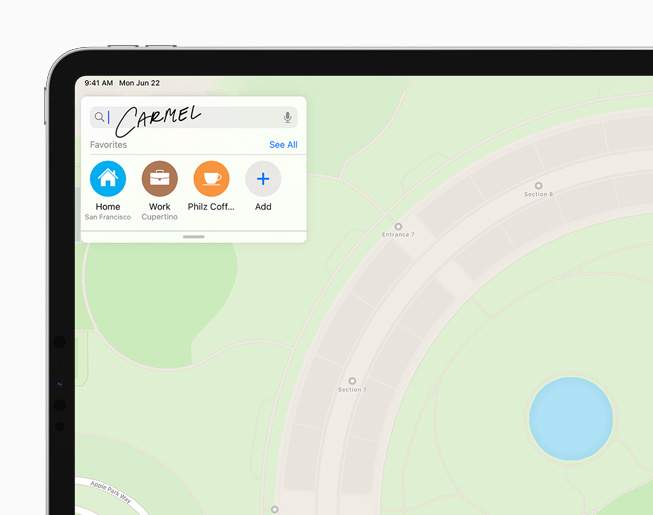 iPadOS 14: Pencil me in, will you?
With last year’s iPadOS cleaving off from the made-for-phones iOS to give the iPad its own Mac-like operating system and capabilities, iPadOS 14 brings in a bunch of enhancements to fully leverage the iPad’s extra screen real estate. New sidebars in apps like Photos, Files and Music for easier navigation, and an App Library and Universal Search a la iOS 14. The big changes though are with the Apple Pencil – with the new Scribble capability, you can write in any text field with Apple Pencil and it will be automatically converted into text. Once you scribble something in, data detectors can recognize what you’ve written – phone numbers, dates or addresses – and link to the appropriate apps actions like making a call, adding to the calendar or pulling up maps. Draw a crude shape, and iPad handily converts it into a proper, geometrically-perfect shape. Such a blessing for folks who draw with two left hands!

AirPods Pro: Small upgrades, big impact
Deeply entrenched in the Apple ecosystem but share one pair of AirPods Pro across your iPhone, Mac or iPad? This one’s for you. The new automatic switching capability for AirPods Pro will now allow you to switch between devices seamlessly, so if you put down your iPhone call and pick up your iPad to watch a video, the earphone audio will switch to the iPad automatically. Get a call in between, and it will reroute the audio back to your phone. Good stuff. Another new feature coming to AirPods is spatial audio, which will use the internal accelerometers to track your head and your device’s location to simulate a simulated-3D soundscape with 5.1, 7.1, and Dolby Atmos surround sound. 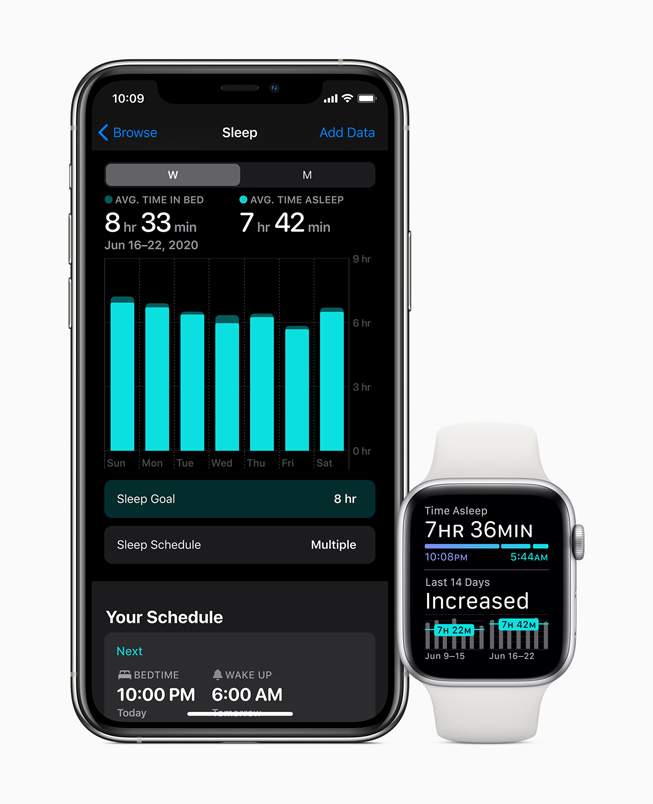 WatchOS 7: Good habits, delivered to your wrist
If you weren’t already sold on the most popular and comprehensive smart wearable out there, Apple’s got you in its sights. When it ships later this year, WatchOS 7 will finally add sleep tracking capabilities that has been the one sticking point in its arsenal. As you end your day, Apple Watch will start up a wind-down routine to turn on the Do Not Disturb mode on your phone, dim the Watch screen and start monitoring micromovements as you sleep, ready to give you a visualization of the previous night’s sleep, including periods when you’re aware or tossing and turning. A more topical addition, and quite honestly something I can’t tip my hat off enough to Apple for, is handwashing detection and a countdown to ensure you’re getting in at least 20 seconds to properly get rid of germs. How, you ask? Apple uses motion sensors, the Watch microphone, and on-device machine learning to automatically detect the motions and sounds of handwashing, and prompt you if you’ve done less. Or even remind you to wash your hands when you reach home. Anything for promoting better hygiene! Other new features include new workout tracking for dancing and sharing of custom watch faces across social media, websites or even directly via a message to a friend. 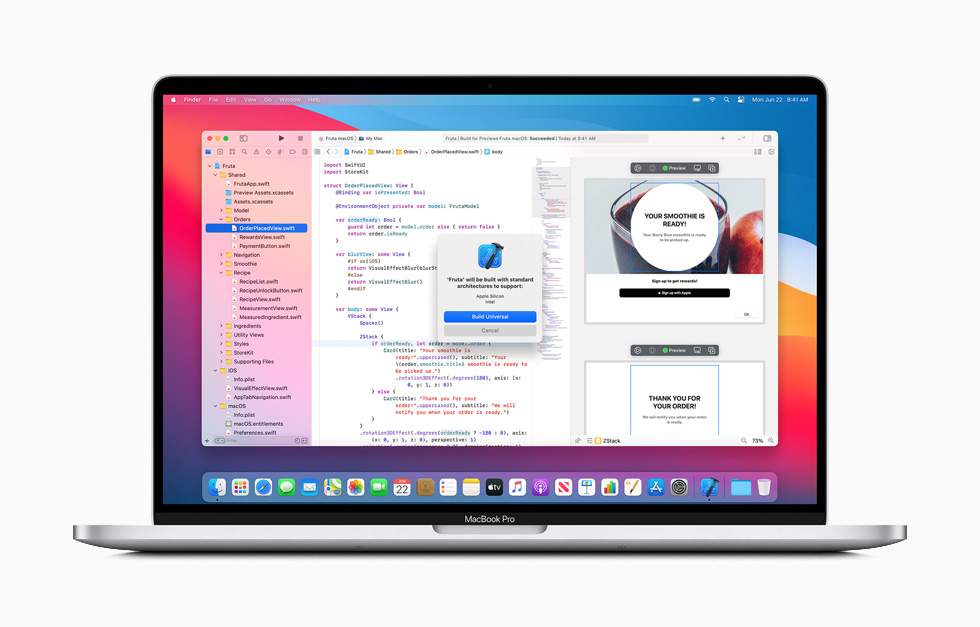 One More Thing: Macs and Intel part ways – say hello to Apple Silicon!
Apple’s move away from Intel for its Mac range was a long time coming. The move gives Apple full control over the chips that power its computing products and will improve battery and performance efficiencies, while reducing its dependence on Intel’s update cycles to deliver its latest Macs. So, come WWDC, Apple bade goodbye to Intel’s x86 architecture and announced a move to its own ARM-based chips that already power the iPhone and iPad. As with any transition, don’t expect this to happen overnight. While Apple says developers will have all the tools they need starting WWDC for porting their apps to work with Intel Macs and Apple Silicon Macs, and Apple’s chips will start powering new Macs coming later this year, the company expects the full transition to take two years. As a consumer, why does this matter? With the move to the A-series chips that power iPhones and iPads, Macs will soon be able to run iPhone and iPad apps, and benefit from the tight software-hardware pairing that delivers battery life improvements and the unparalleled, blazing fast performance we’ve seen on the iPad Pro. Apple has mastered the art and science of end-to-end control over its mobile devices, and it’s time to see what it can do on the Mac!

Want more details on how the event played out? You can see the author's live-tweets notes during the event here