It’s easy to label the Samsung Galaxy Z Fold 2 as a better version of the original category defining yet far from perfect Galaxy Fold from last year, but that tells you only half the story, at most. The Z Fold 2 is a better foldable, nay a better phone even, in every perceptible manner, than last year’s model and more importantly, it does a better job at justifying the high asking price. Even if you put aside the initial sticker shock and look past how many kidneys you’ll have to donate to afford this, this is not a phone for everyone, and there are still the odd chinks in the armor. Should you un-fold your wallet to pick up arguably the most flaunt worthy phone this festive season? Let’s find out, in our review of the Samsung Galaxy Z Fold 2. 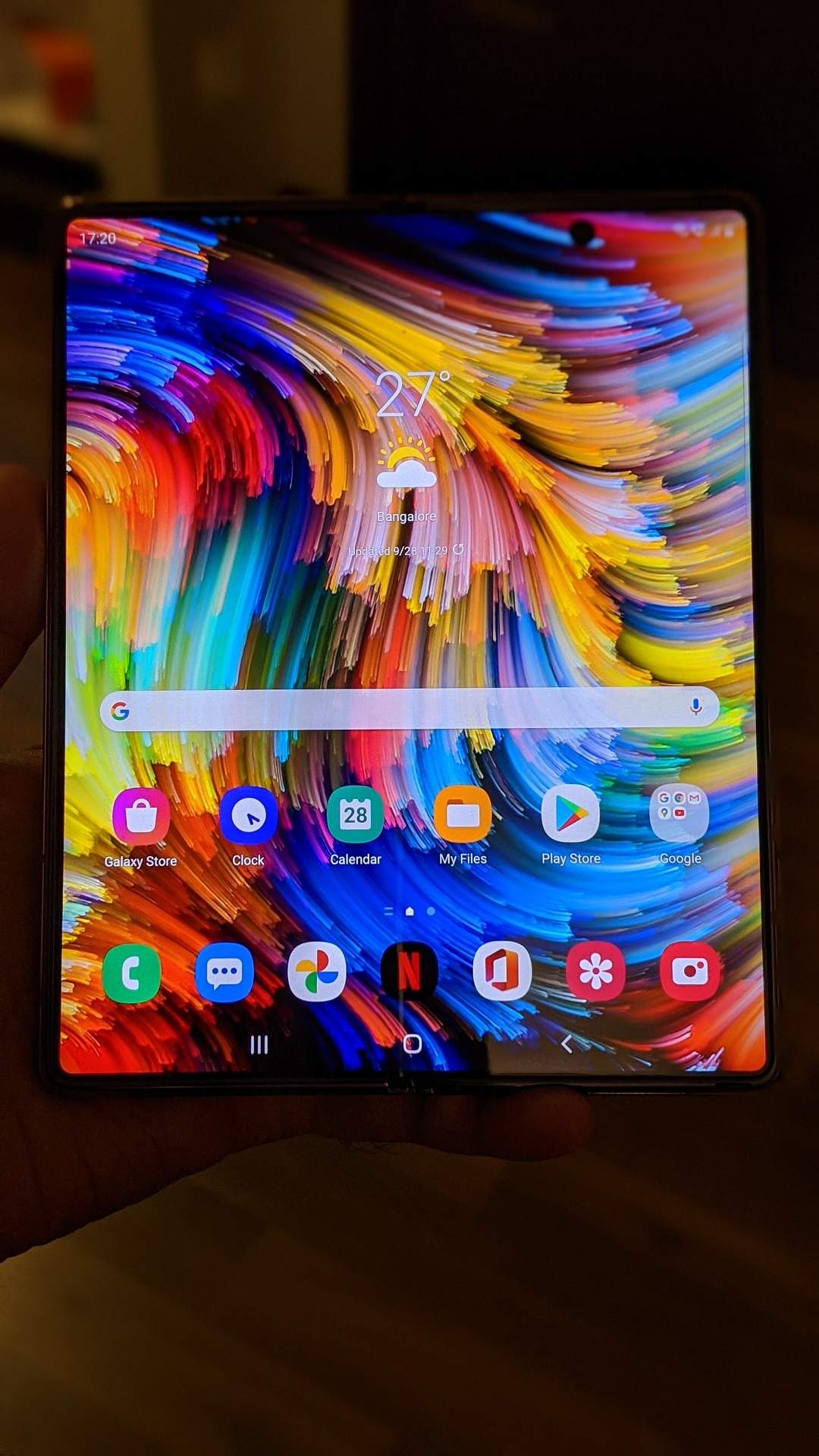 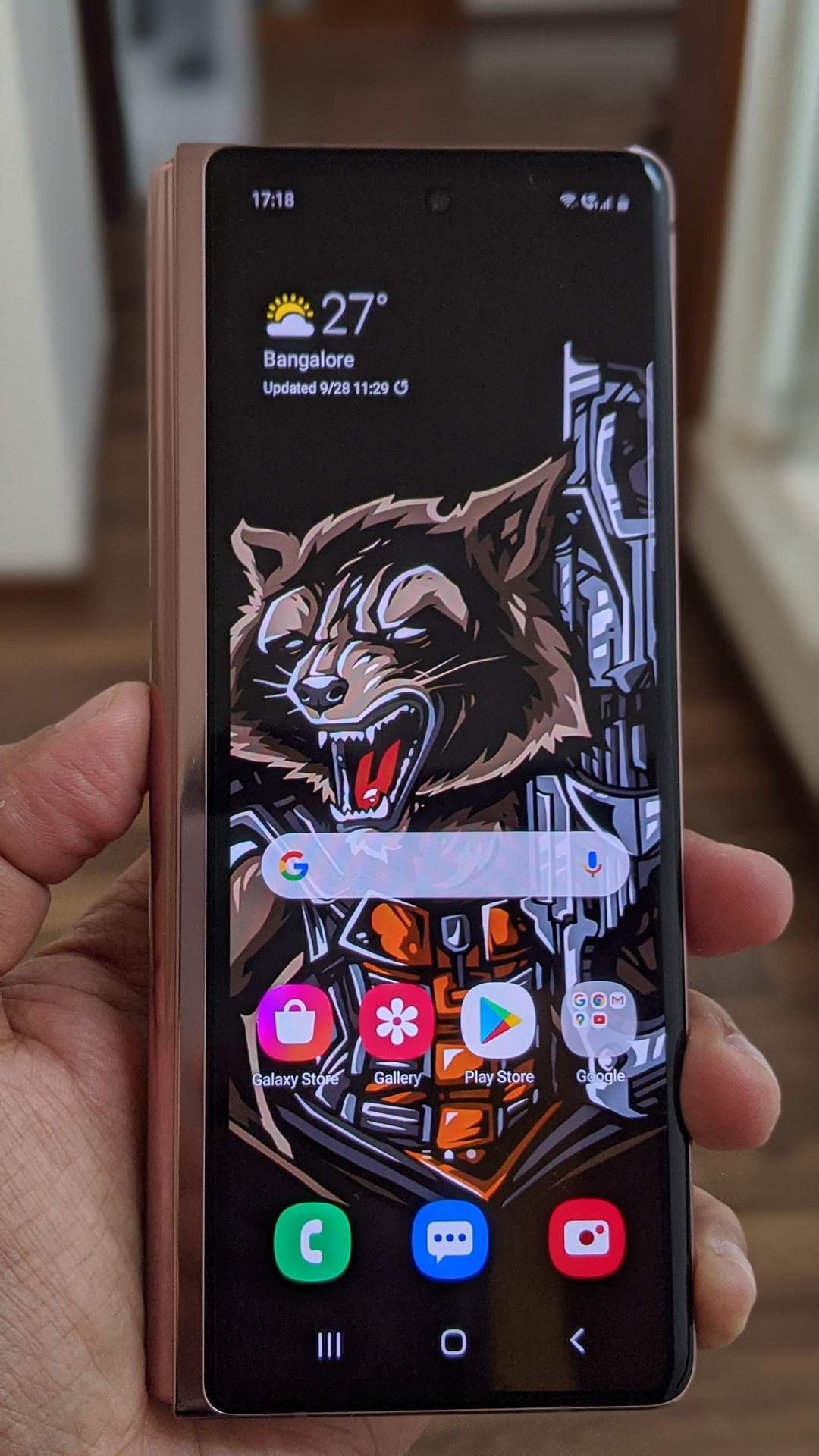 If you’ve seen the original Galaxy Fold, everything about the Z Fold 2 feels more refined and better built. Gone are the plastic parts of yore, replaced by metal and the latest Gorilla Glass Victus, giving it a more solid, less fragile feel in the hand, worthy of the big bucks you’d have spent on it. The two-in-one form factor remains, but in place of the dinky cover display and notched inner display of yore, you get near edge-to-edge screens but on the outside and the inside, along with a significantly strengthened hinge that serves as the spine of the device. About that hinge – Samsung’s taken inspiration from the Z Flip that came earlier this year to deliver a hinge that can stay open at any angle you’d like, which allows the phone to be used in tent mode, full tablet mode or like a mini all-touch laptop somewhere in between. When closed, the phone assumes a mild wedge shape with the narrowest of gaps at the spine. 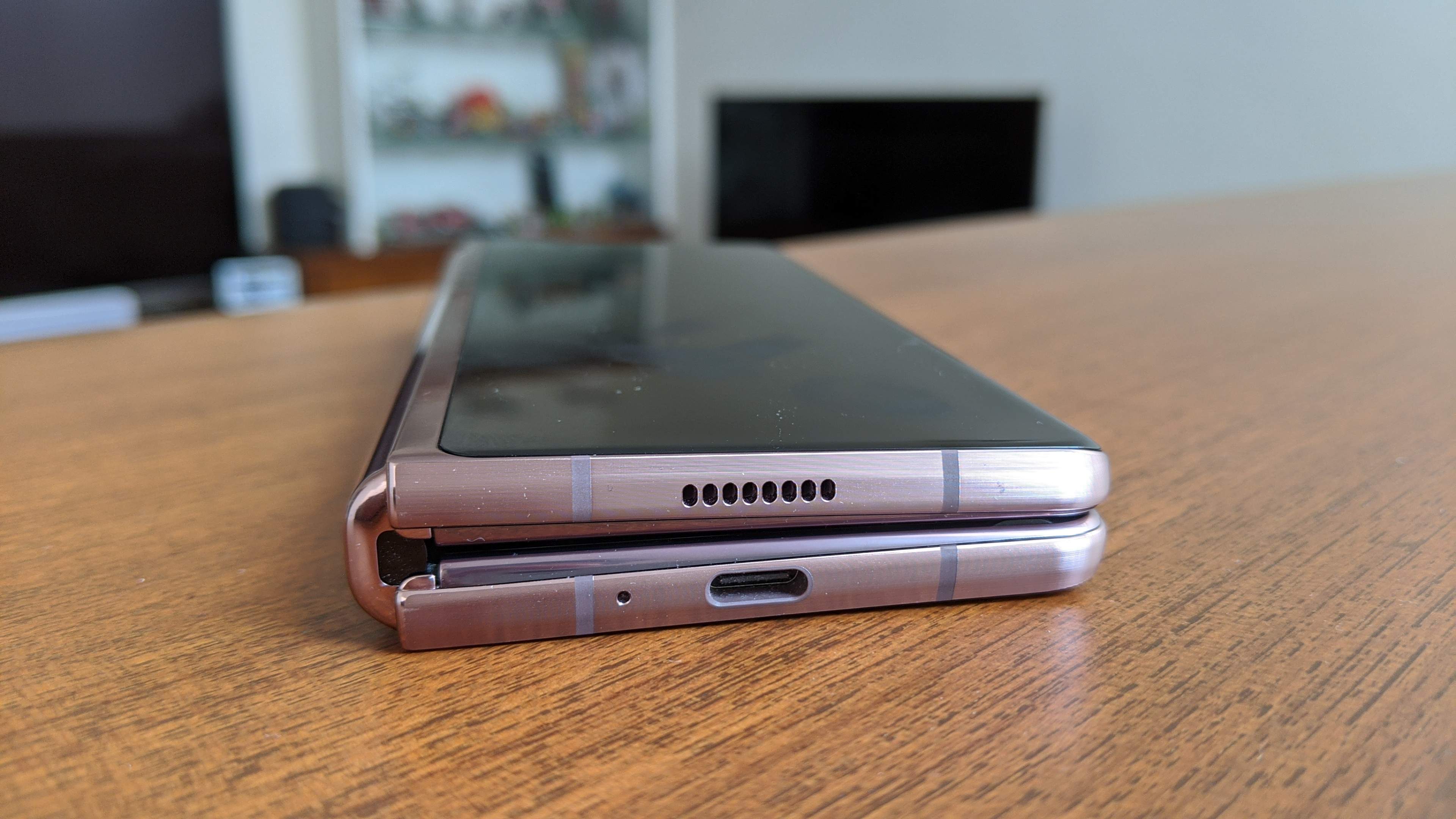 In the hand, the Z Fold 2 is undeniably chunky when closed, but the tall form factor gives it a lot of grip, crucial for a phone that weighs a significant 282 grams and is still a fair bit more fragile than the rest. It slips in all but the skinniest of jeans pockets, but you can always feel the weight. The power button/fingerprint scanner on the right edge is well executed, as are the dual speakers if you hold the phone in landscape mode. The rear is inspired from the Note 20 Ultra lineup, which continues to look fresh. No headphone jack or expandable storage though, and possibly the bigger omission is the lack of dust/water resistance. If there’s a chink in the armor, this is it. 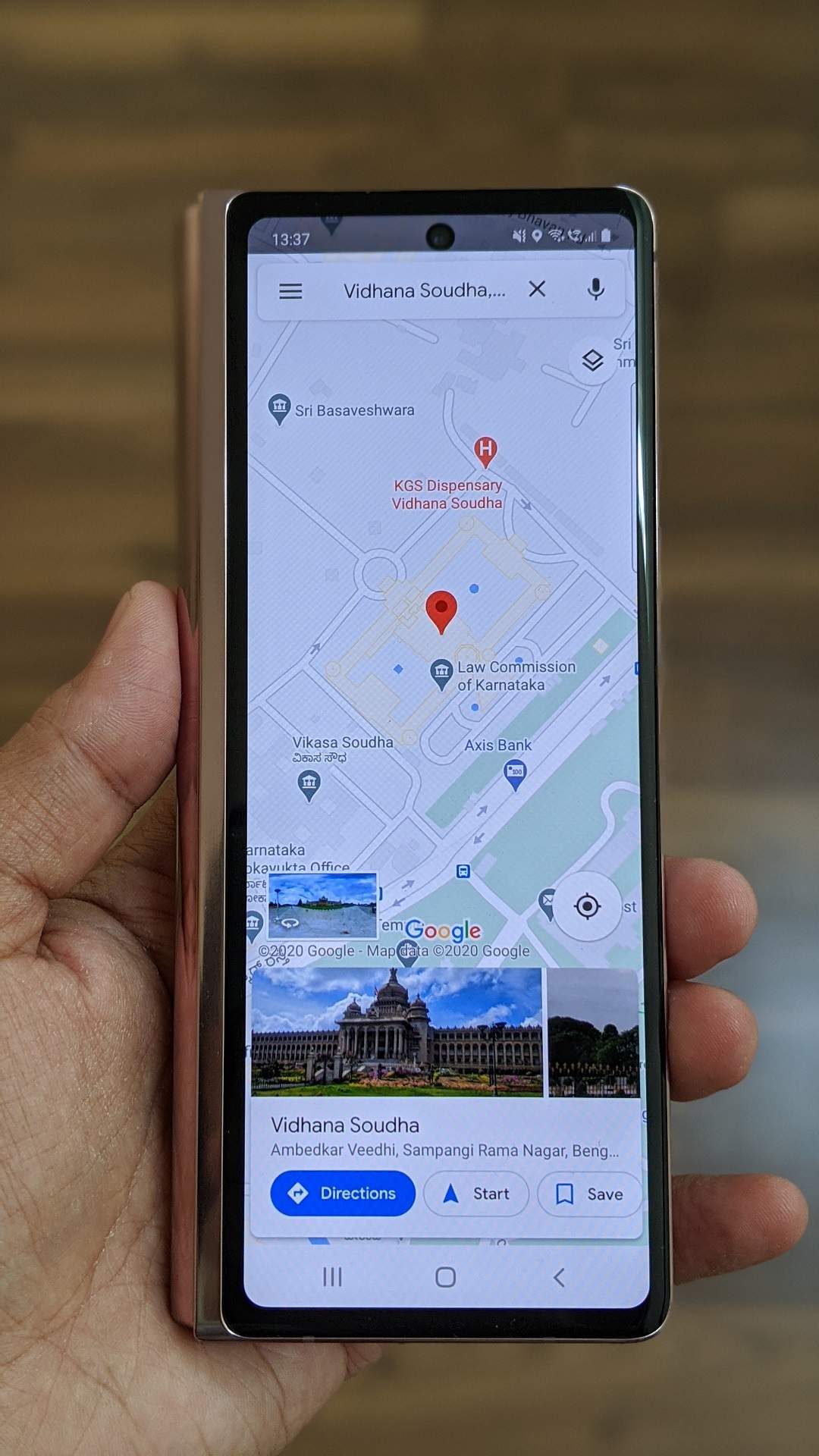 The big upgrade is on the displays, with the outside cover screen now a far more usable 6.2in HD+ Super AMOLED display. This is no longer the dinky display on the first-generation Fold which had you running to the broader inside display for any serious use. Aside from it still being a bit slim and tall, the expansive screen is plenty bright and perfectly usable on a day-to-day basis for messaging, picking music to play, using maps and quick web searches. Granted, its 25:9 tall aspect ratio means that typing is a bit cramped initially, but nothing about the outside screen forced me to have to open up the inner display, and the boost in usability of the outer screen is, in my books, the bigger of the two screen upgrades. 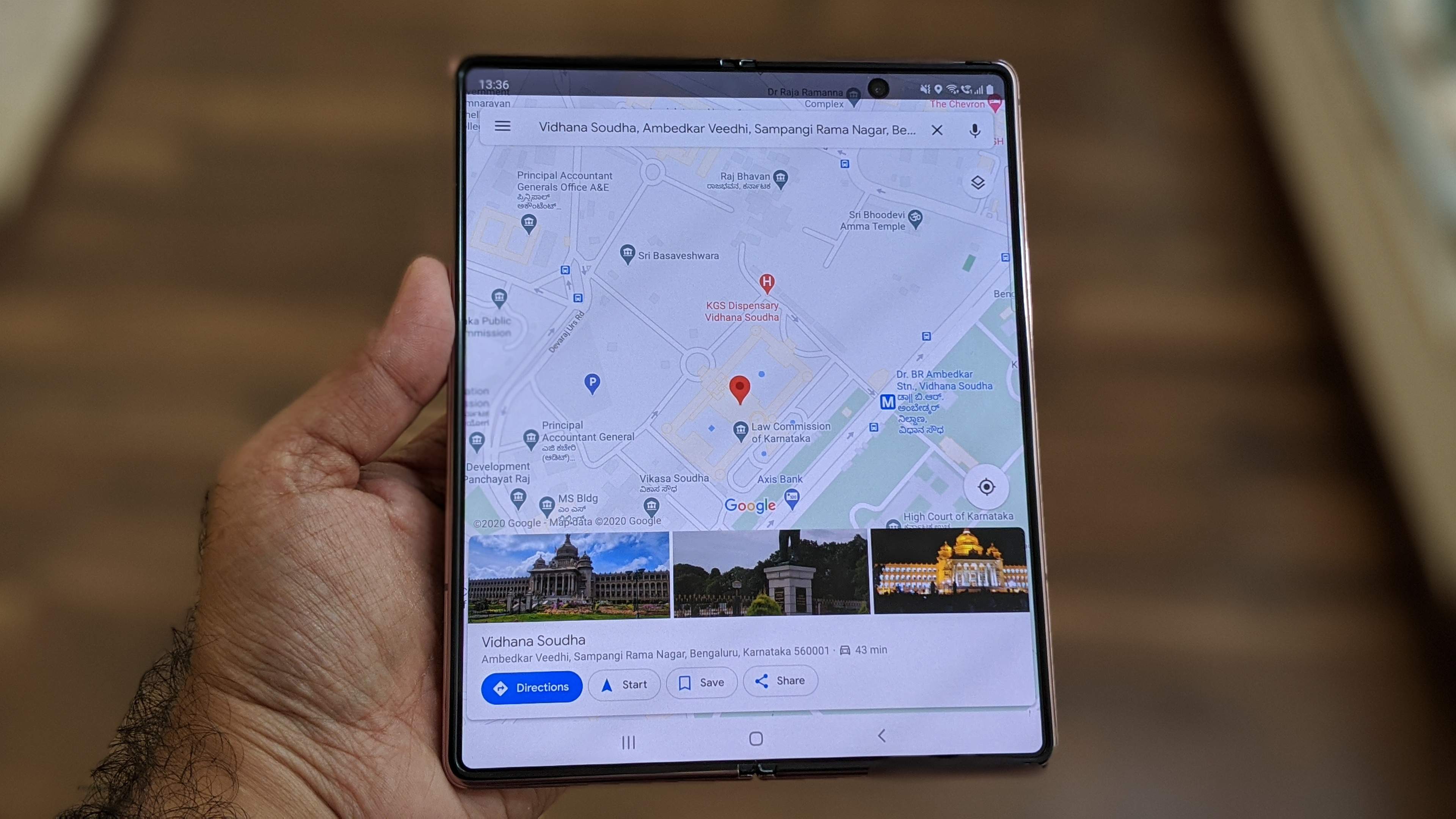 For all the times you want to consume content on a bigger screen, or read copious amounts of text, you simply open up the Z Fold 2 to reveal its headliner 7.6-inch, 1768 x 2208 pixel, 120Hz variable refresh rate folding display, with no unsightly notch that plagued the first generation. The variable refresh rate will keep power consumption in check when you’re browsing the web and ramp up all the way to 120Hz when you’re gaming and navigating the user interface, for that butter smooth fluidity that we’ve come to expect of our flagship phones. This is a good Samsung panel made of ultra-thin bendable glass sandwiched between layers of plastic and binding adhesives, with the supplied screen protector prone to scratches (from sharp fingernails) and collecting dust. Keep it clean and tidy, and the sheer expanse of the inner display rewards you with all that extra visual real estate each time you unfold the device. Apps, particularly web browsers and productivity apps, benefit the most, and while videos are fun on the bigger canvas, keep in mind the almost-square dimensions of the inner display means that you will get the letterboxing effect (black bars above and below the content) while watching most wide-screen content. To those asking, yes – there is still a noticeable crease if you look at the screen from certain angles, but it’s not really visible when you’re looking at the display straight on. 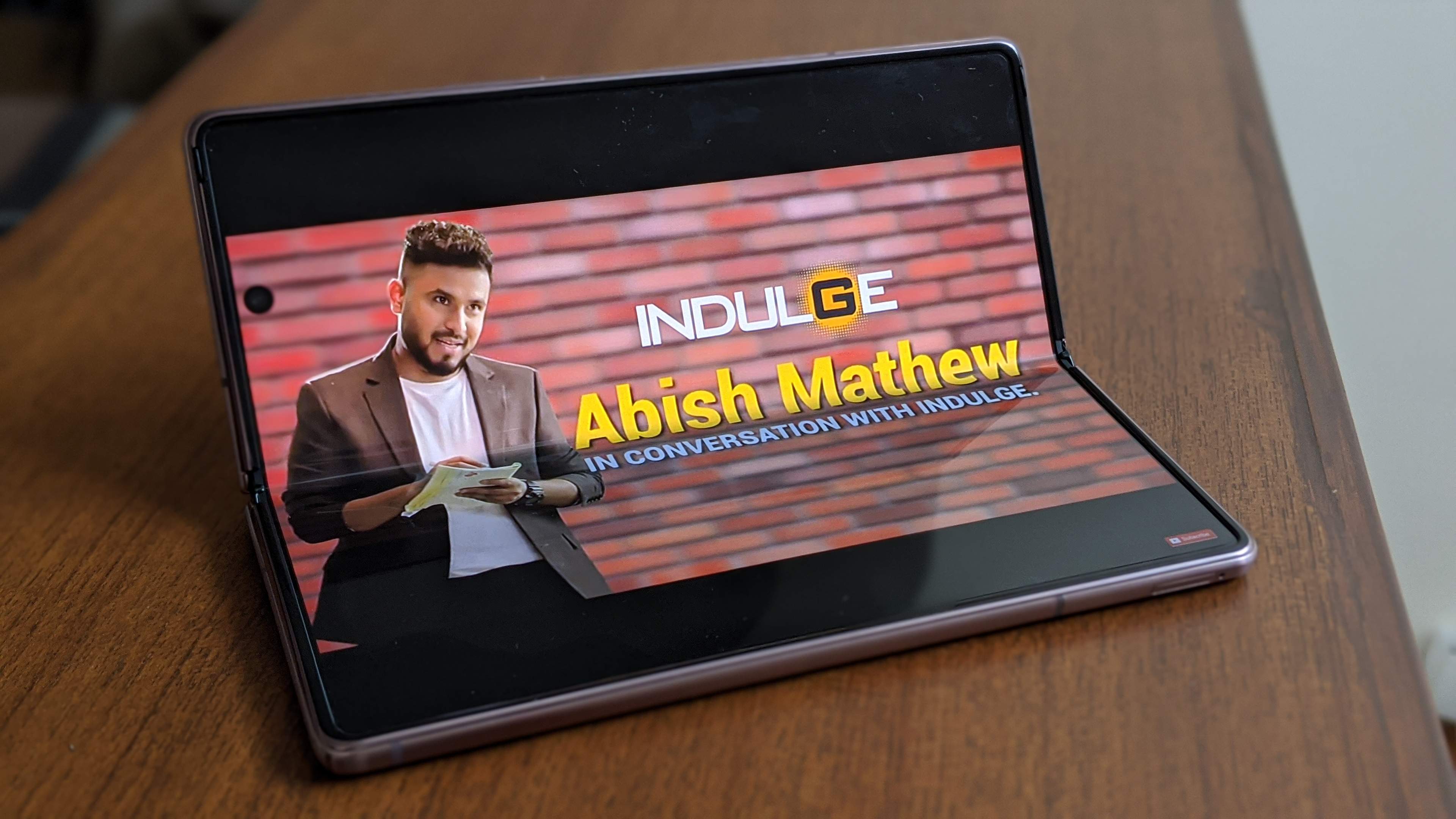 One area where the Z Fold 2’s inner display really comes into its own is Samsung’s One UI 2.5 enhancements to its multi-window capabilities. You can run up to three apps in split screen and save often used app layouts in pairs. Like the Z Flip, you can run apps in “flex mode”, which allows an app like YouTube to run a video on the top half and allow you to scroll through comments on the lower half. While One UI allows you to have different screen layouts for the outer and inner screens, the screens naturally work together, so apps you have on the cover display open up full screen inside…and you can set the reverse to happen on an app-by-app basis as well. 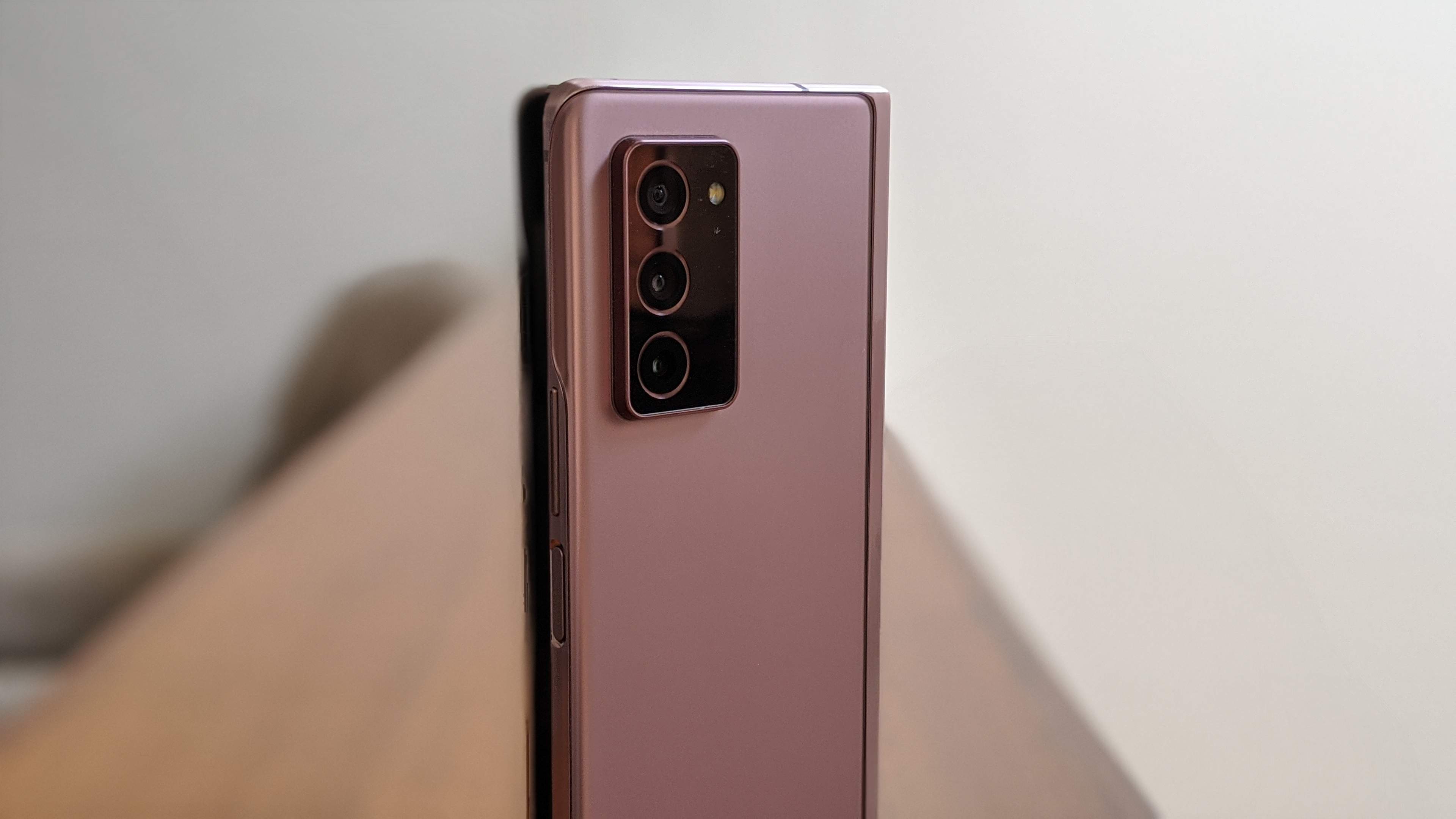 Keeping things zippy is Qualcomm’s latest top-shelf Snapdragon 865+ processor, not Samsung’s own Exynos 990 chip which power the Note 20 Ultra, which means that the Z Fold 2 gets the same hardware as the rest of the world. That, along with 12GB of memory, keeps things humming along nicely without the Z Fold 2 breaking a sweat even when you’re running multiple apps in split-screen mode. Battery life is reasonable given the power and screens on offer, and I used to get anywhere between five to six hours of screen-on time depending on how much I used the inner display, how demanding the tasks were – bottom line, this should last you a full day of use, likely no more since the temptation to open up the inner display and use the phone for extended durations for everything from videos to games is so darned real.

Some images from the phone: 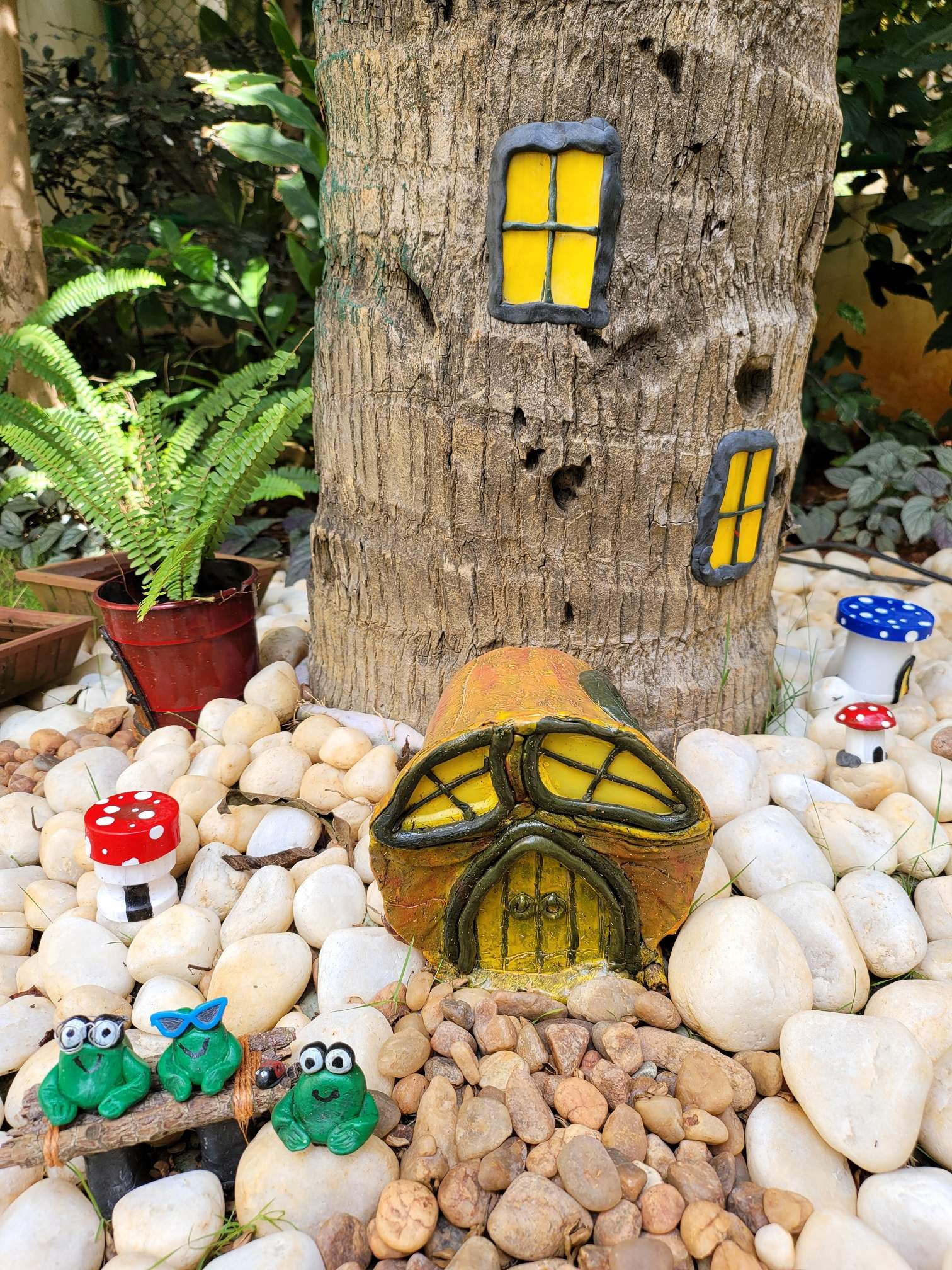 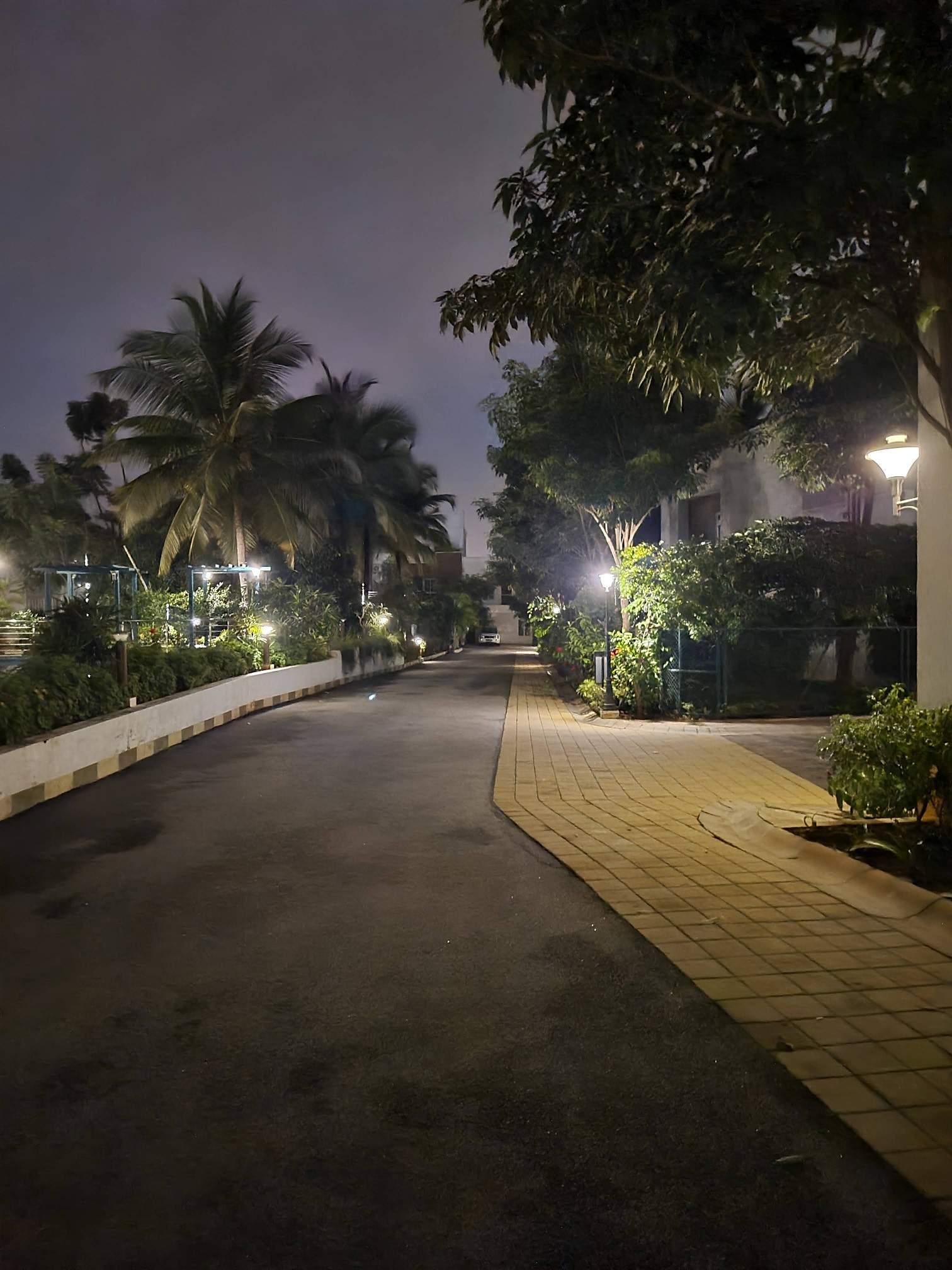 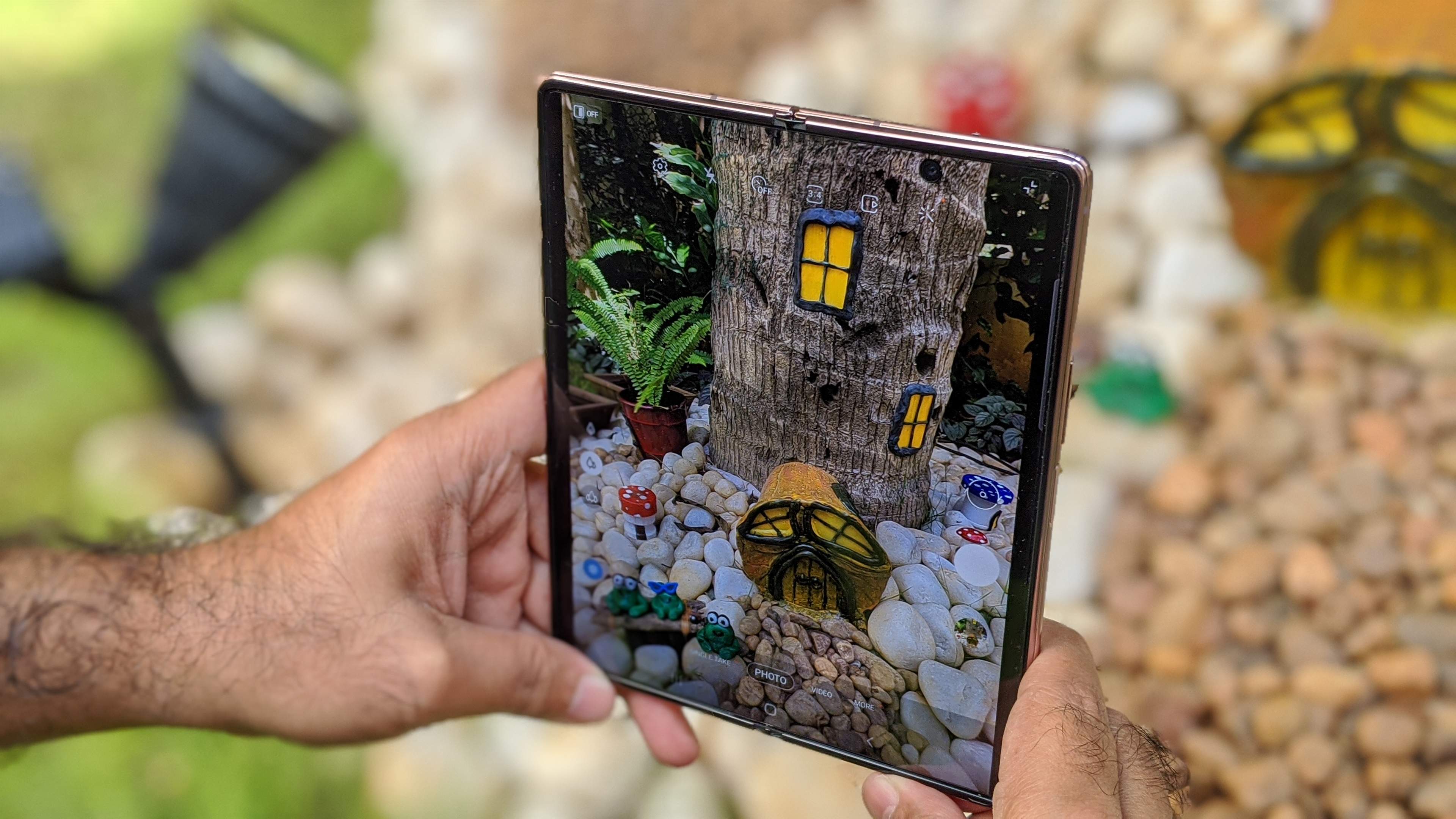 So, here’s the thing about the Z Fold 2’s cameras – it has five cameras, three on the back (12MP standard, wide-angle and telephoto shooters), one in front and one inside, but it skips the 108MP sensors found on the Note 20 Ultra and the S20 Ultra. That may sound like Samsung has held back here, but in reality, the images turn out pretty decent and hold up well against those from its siblings. Photos from the primary cameras aren’t going to give you reason for complaint – colors are as expected a bit oversaturated, but focus and detail are all on point, and noise is kept in check in low-light or high contrast situations. The wide-angle allows for interesting perspectives and the zoom is okay till about 10x – which is where the Note 20 Ultra’s zoom pulls ahead. Selfie cameras are middling, and videos skip the 8K trend for 4K/60fps resolution. 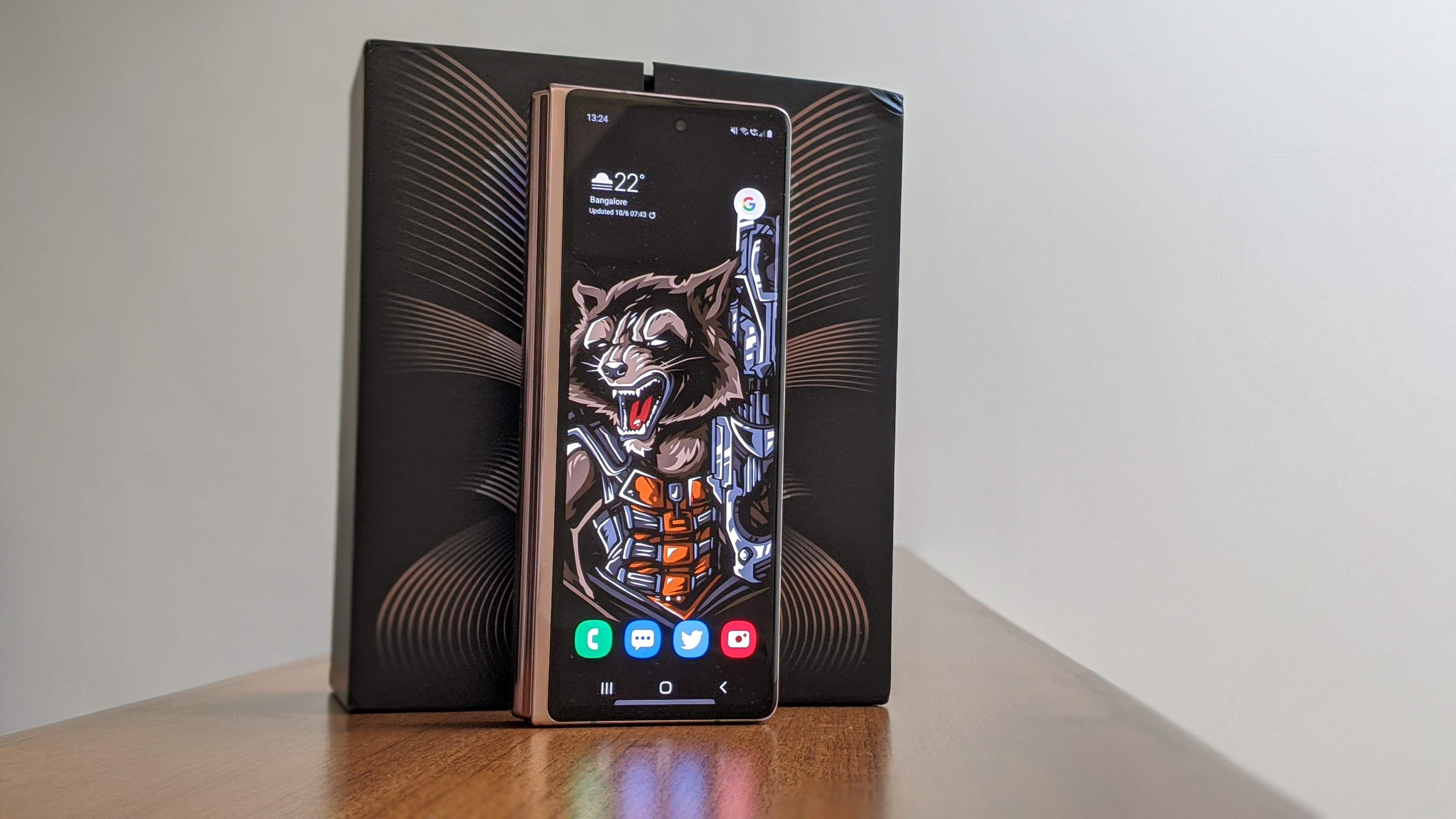 Without having seen what Apple will pull out of the festive stocking next week, I’d wager that the Z Fold 2 stands a very good chance at earning the phone of the year recommendation in the ultra-premium “price no bar” category. Sending the Fold back after ten days of use, I sat down to distill what really made this phone stand out…since it well and truly did. It checks off the six boxes that make good phones great  – a great screen, powerful performance, optimized software, good battery life, capable cameras and good design – and tops it off with a user experience that is not only unmatched amongst its peers but also remarkably refined for a second-generation product. 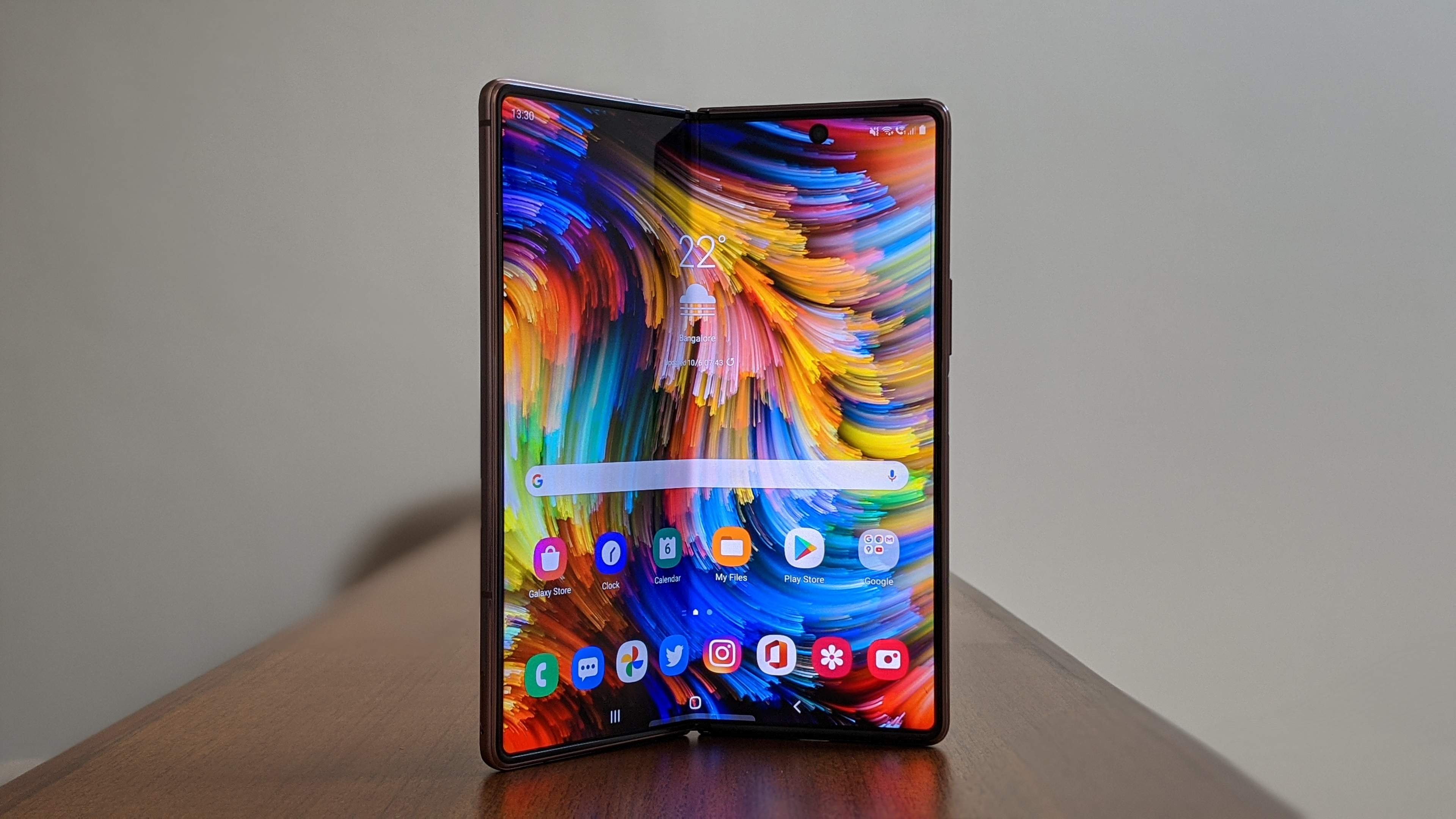 Who would the Z Fold 2 appeal to? This is a phone that stands apart, due to its unique form factor, and draws attention wherever it goes. For this, it’s sure to appeal to the well-heeled who have similar tastes in expensive watches and fancy cars, folks who either want the most distinctive looking phone around or want a powerful no-compromise smartphone and a tablet all rolled into one device. If it matters to you, the Z Fold 2 guarantees an air of exclusivity with the purchase, while still delivering a device that’s as useful as it is capable of evoking the joy of using a new form factor each time you open it. Even in the sea of over-achievers in Samsung’s portfolio, the Z Fold 2 is an absolute triumph.