Apple WWDC 2021 highlights: What was announced and why it matters?

Every year at the Worldwide Developer Conference, Apple goes all out to charm its app developers with updates to its mobile and computing platforms, but for the rest of us, the main event keynote is a glimpse into the future of the Apple devices we’re using today. At this year action-packed blink-and-you’ll-miss-something-important, Apple showed off updates to all of its operating systems in the form of iOS 15, macOS Monterey, watchOS 8, and iPadOS 15, all of which will be released to consumers later this year. If you missed the keynote or just want a refresher on all the shiny new software Apple announced, here are the highlights that matter from WWDC 2021. With iOS 14 serving up a visual overhaul for Apple’s iPhones, it was the turn of the core apps that really bring home the ecosystem advantage. FaceTime got the maximum…facetime, with a bunch of new features, such as support for spatial audio that makes it seem your friends’ voices are coming from their on-screen position, or the voice isolation feature to focus on your voice when you’re speaking in a noisy environment. There’s portrait mode for that pleasing background blurring, a new Grid view and support for the new SharePlay API, which allows you to share video, audio and even your screen over a FaceTime call. And one feature we didn’t see coming – you can now schedule FaceTime calls and generate shareable FaceTime links that...get this, let desktop and Android users join your FaceTime calls directly from their browser! Notifications have gotten a bit more ‘focused’ with a new Focus mode, that lets you set profiles based on which you’ll see certain notifications (and drown out the non-essential ones), such as when you’re at the gym or at work. The notifications themselves are fresher looking, and they all fit into the Notification Summary which gives you an overview of what your notifications for the day have been (handily clubbed into batches for easier consumption). Elsewhere, revamps abound, whether it’s better sharing features for shared photos over Messages, optical character recognition in photos for better searching and selection directly from your photos, or intelligently surface shared content from Messages for you to peruse when time permits. And for whenever we venture out again, Maps has a bunch of new interactive and augmented reality features (albeit limited in use in Indian cities), the Weather app is all manners of gorgeous and information rich, and the Translate app now comes with auto translate capabilities to auto detect the spoken language. 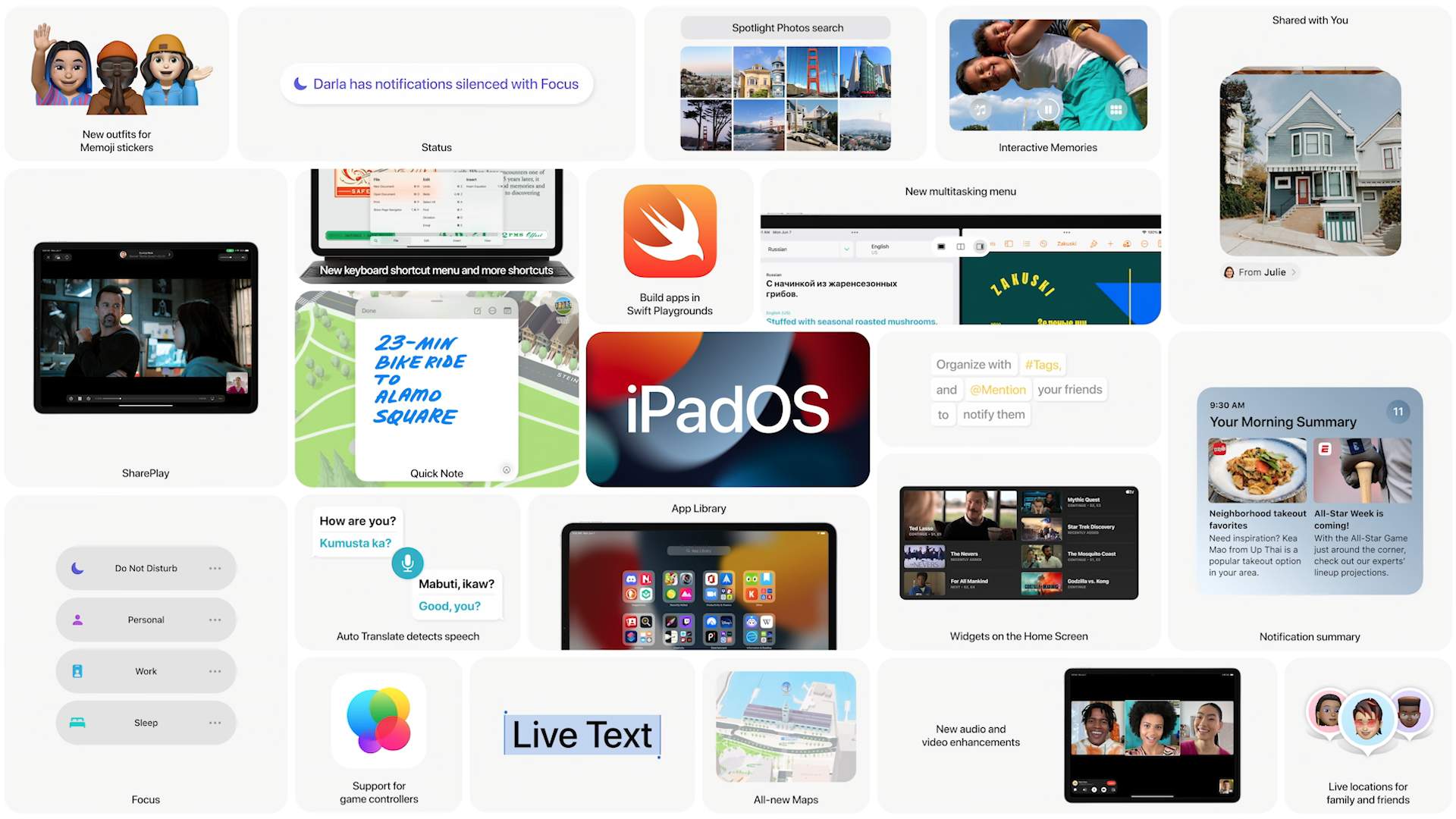 Close on the heels of the announcements of the M1-powered iPad Pros, Apple announced a slew of new features that make the iPad more productive and adept at everyday tasks. Starting with iPadOS 15, iPads will gain a new multitasking menu that will simplify the way you handle multiple windows, moving away the gesture based system currently in place – with iPadOS 15, you can easily switch to Split View or Slideover mode with a new three-dot menu at the top of any app window. Elsewhere, a bunch of features bring iPadOS in line with iOS, such as the ability to add larger widgets anywhere on the iPad home screen and the App Library available on tap from the dock. If you’re a Pencil-toting iPad user on iPadOS 15, you can create “Quick Notes”, quickly from any app or window, and Notes add tagging other collaborators and smart folders. Finally, while it isn’t the Xcode code development environment that some of us would have hoped, you can finally use Swift Playgrounds 4 to build an app right on your iPad. macOS Monterey
Aside from sharing all the Focus, SharePlay and Quick Notes features, macOS Monterey brings in iOS’ Shortcuts capabilities, allowing you to automate tasks on your Mac. Safari got a big update as well, bringing in tab groups which synchronize across Safari on the iPad and iPhone. In a long overdue move, Safari is finally getting support for Extensions across devise, so users can access the Extensions that you love on the Mac on your iPhone/iPad too. Macs are even getting AirPlay support, which lets you play content from an iPad or iPhone directly on the Mac’s screen or through the built-in speakers. 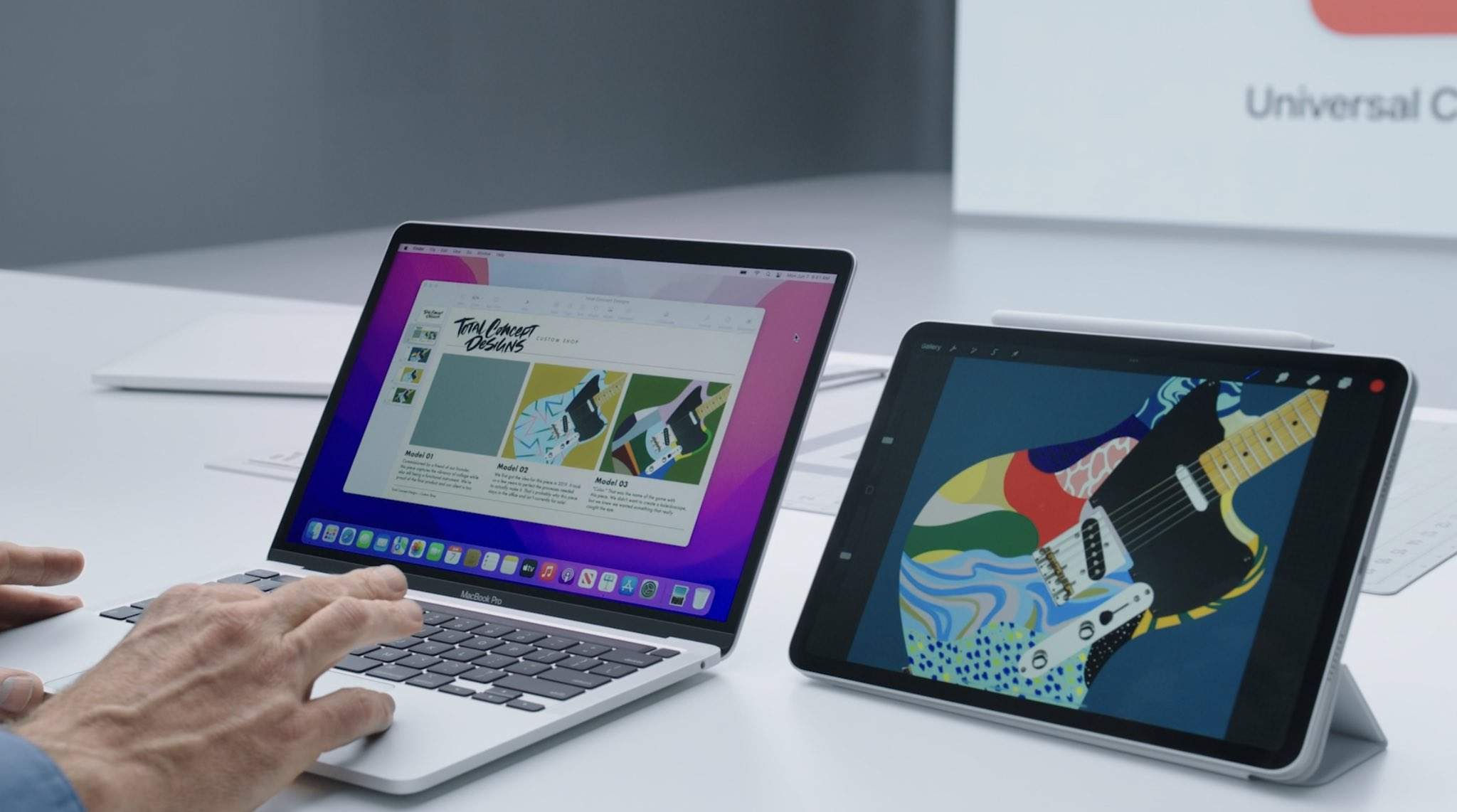 Speaking of, if you own an iPad and a Mac (or multiple combinations thereof), Apple showed off a new Universal Control feature which really drives home the ecosystem benefits of buying Apple products. It will let you use one keyboard/mouse to control multiple iPads and Macs, automatically detecting when a new compatible device is placed nearby. In a demo that was packed with classic Apple magic, we saw two Macs (one iMac, one MacBook Pro) placed side by side with an iPad, and the mouse on the MacBook Pro moved freely between the Macs and the iPad, without the need for any additional software. The feature supports using the trackpad and keyboard across all three devices, and even allows users to drag-and-drop files right over to their iPad or the other Mac. watchOS 8
Slimmer pickings on your wrist, with a small set of improvements reserved for the Apple Watch’s platform. Aside from supporting Tai Chi and Pilates in your workouts, there’s a new Mindfulness app that merges the Breathe and Reflect (phrases that will boost your mental well-being) functionalities, plus the ability to track your respiratory rate when you sleep or the ability to view portrait-mode faces on your wrist. That said, a discussion about the Watch is never complete without updates to the Health app, which now adds in more capabilities to track changes in your overall health. For example, the Health app will now track the wearer’s “Walking Steadiness,” which determines if users are steady when they walk, or if they’re at risk of falling, and “Trends” which can surface potential health issues. My favorite bit though was Health Sharing, which allows you to see trends and health data for their family members – great for folks with ageing parents (as long as they’re all-in on the Apple ecosystem, of course)! 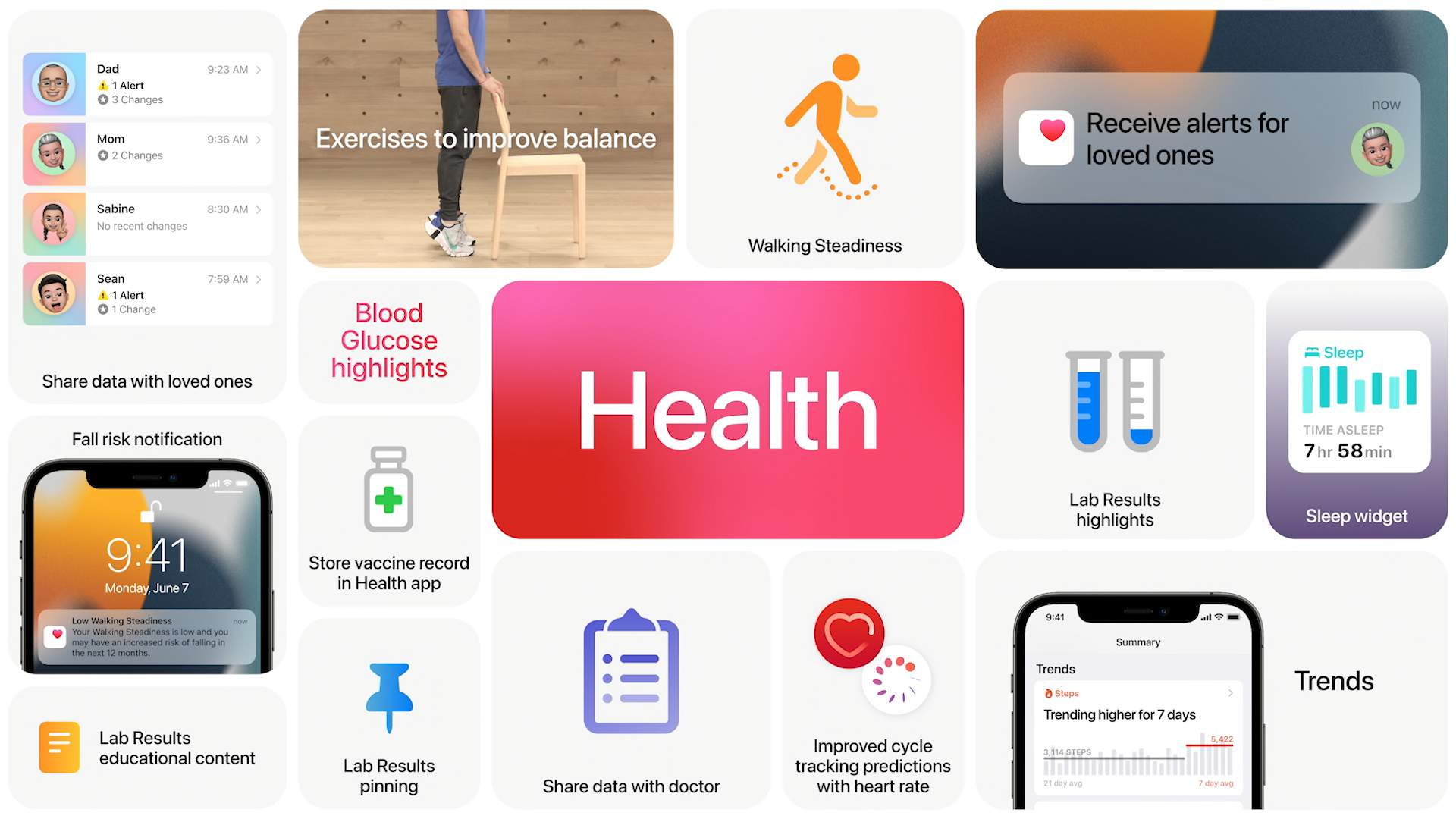 Other Stuff
Even the odds and ends you wouldn’t have expected to be updated got some love at WWDC 2021, such as the AirPods getting conversation mode to boost the volume of voices in noise environments or AirPods finally showing up in the Find My app. Elsewhere, if you use Apple’s Mail app, others will not be able to see your IP address or location, nor be able to check whether you’ve opened an email. Siri requests are now moving on device, meaning they will now be processed without the need for an Internet connection. And finally, for the privacy paranoid and sick-of-spam, iCloud+ users will get access to a new email forwarding feature which hides your actual email address while signing up for new services, as well as a new internet privacy service for Safari (called Private Relay) that encrypts your traffic so no one else can decipher it.