It’s no secret that Rihanna just announced her skincare label Fenty Skin. The label has been making big waves as it just launched its Instagram page yesterday and Rihanna herself features in the first promo video for the label. Fenty Skin comes a year after the huge success of Rihanna’s beauty label Fenty Beauty which has set many major milestones in the beauty industry. Not a lot has been announced about the product line-up of Fenty Skin but Rihanna herself took to her Twitter page to answer a lot of fan Tweets and queries. 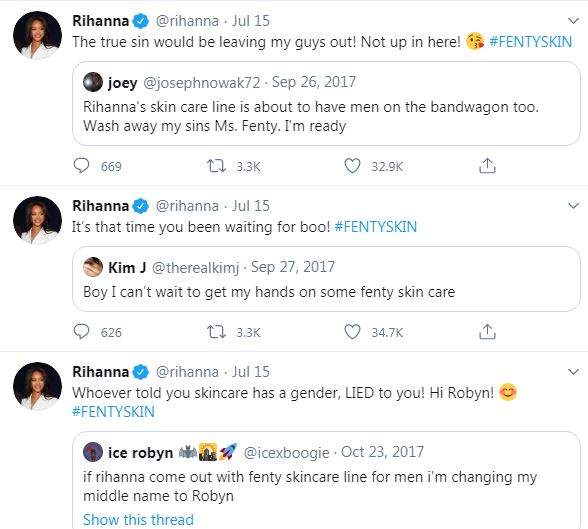 One Twitter user wrote, “If rihanna come out with fenty skincare line for men i'm changing my middle name to Robyn.” Robyn is of course, Rihanna’s real name and RiRi schooled the user saying, “Whoever told you skincare has a gender, LIED to you! Hi Robyn! #FENTYSKIN” Twitter users later pointed out that the tweet was from 2017. But Rihanna also replied to a new Tweet which said Rihanna’s skincare line will also have men on the bandwagon. “The true sin would be leaving my guys out! Not up in here!” she replied.

There’s been a lot of rumours about the product line-up of Fenty Skin and there’s been no official news as to what exactly the label’s first line will feature. It was revealed a few weeks back that the label has filed a trademark for six products, namely Buff Ryder, Instant Reset, Fat Water, Flash Nap and Hydra Vizor all of which are skin prepping products.