Shanthi Sridharan, a Chennai-based homemaker has been taking the traditional artwork kolam worldwide. She is a self-taught artist for the last three years, and has taken to social media to showcase the traditional art form, which has seen a decline in the recent years. The homemaker and kolam expert is a big hit on Facebook, and has over 1.5 lakh followers.

“It all started in 2015, when my younger daughter Shivanthika opened my Facebook page and taught me how to be active on social media,” says Shanthi Sridharan. “In fact, she is the one who helps me in taking videos of my kolams,” she adds. The 50-something old has not only mastered the art, but has also found ways in creating murals to do portraits with it. What makes her work unique is the fact that she moves beyond the traditional lines and patterns, and uses modern drawing techniques like concentric circles and vertical lines to create designs of nature, shapes, flowers, birds, portraits and mandalas. This has also helped her to explore the non-symmetrical patterns that has pushed the boundaries of design. Shanthi’s technique involves her sketching out the basic design on floor and colouring it. She says, “I draw kolams largely from memory and I think too much of trial and error will spoil the effect of kolam.” 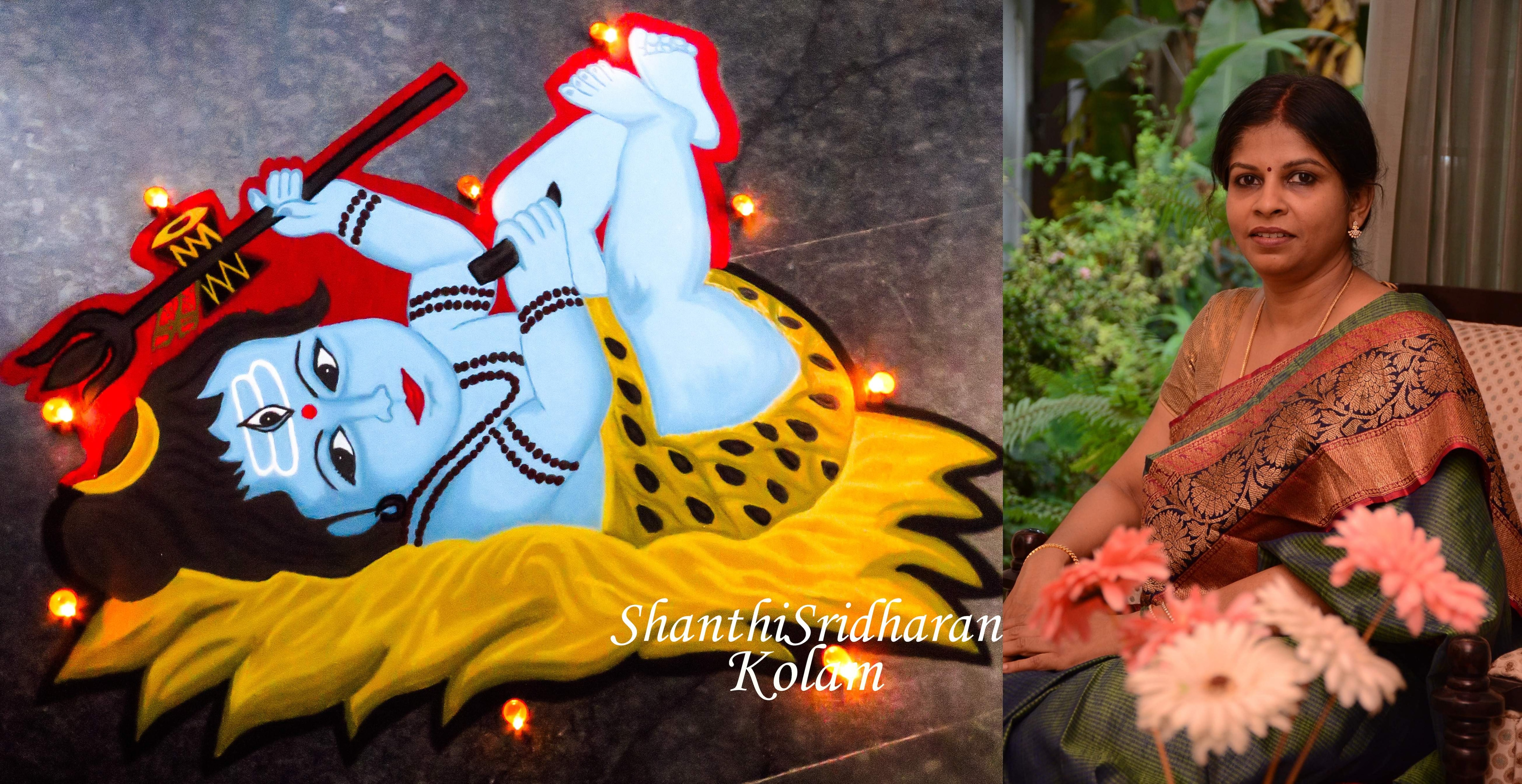 The artist has also compiled all her work in a book and one of her kolam designs has also made into the Central Board of Secondary Education textbook. The kolam expert gives us a trick for drawing beautiful kolams, “It’s in the powder you use, the hand control and the design. The powder granule size has to be commensurate with the thickness of the line and if you want a thick line, use rice flour with kolam powder. If you want a thin line, then use a smooth nylon kolam powder and also learn to take the right quality of powder while you draw.” Kolams are a symbolic representation to prevent evil spirits from entering them into the home. “These drawings cannot be preserved,” says Shanthi, adding,  “They get walked on, washed out or blown around in the wind. You have to let go of them, and a new one is made the next day. When I draw, I know this kolam is not going to be there for eternity. This infiniteness and detachment, creates an unmatched mysticism only paralleled by the aura associated with the existence of the universe.”

Apart from the traditional kolam techniques like the pulli kolam, padi kolam, kambi kolam and freehand drawn rangolis, Shanthi has tried to create a new category of modern designs and colour-based kolams. Talking about the unusual colour combination, Shanthi said “I source these colours from Madurai, Bengaluru and Mumbai. I want my kolams to be vibrant and vivacious. So the colour combination is a very important feature in my kolams. Based on what I want to convey, I choose the colours.” 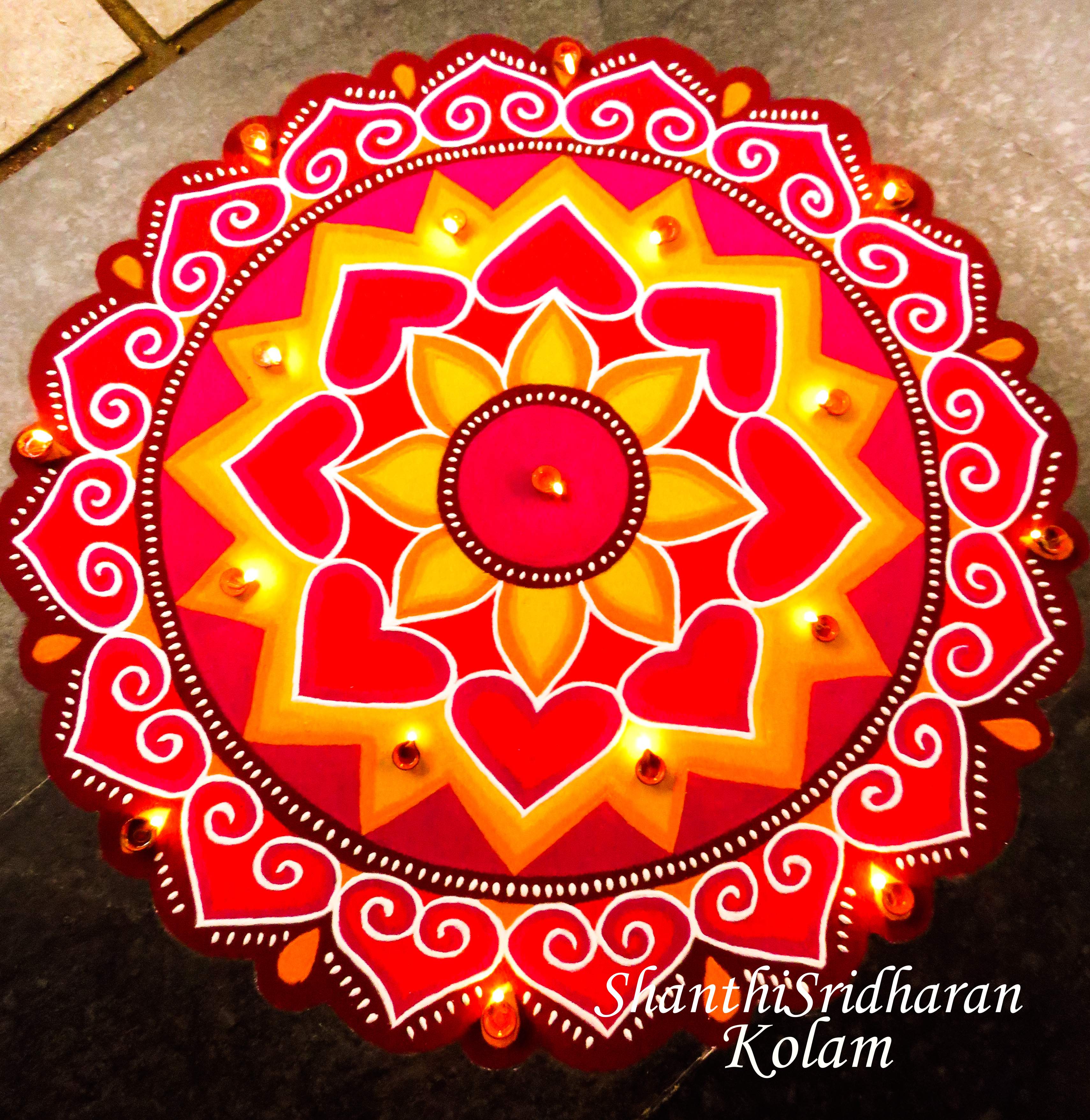 Over the years, Shanthi has made around 2,000 designs and her longest record is a portrait of Ganesha which took her eight hours to complete. Every day her kolams reach millions of people on the web and are used not only in homes, but also in competitions and events by her followers. Taking inspiration from temple sculptures Shanthi goes an extra mile to ensure that the portraits of God are just perfect, which she says, “I have spent a lot of time exploring Hindu Gods. The diverse range and scale of Hindu Gods is just a pleasure to draw inspiration from. I can add so much creativity, as I deeply understand the philosophy of every Hindu God I draw. ”

Shanthi’s ultimate dream is to preserve this traditional art form as kolam has a very unique cultural heritage which is relevant even today.