PokerBaazi, a leading online poker platform has announced its association with non-profit NGO Vidya Integrated Development for Youth and Adults (VIDYA). PokerBaazi will donate a share of the rake collected during the upcoming PokerBaazi Premier League Special Edition (April 21-28) towards the education and upliftment of 14 underprivileged girls for a year.

In the domestic poker circuit, the PPL has already created quite a sensation over the past few years. Every year, gamers eagerly wait for the announcement, and this year was no exception. The announcement of the Special Edition with a CSR initiative seems to have doubled the excitement this year.

The PPL Special Edition boasts a guaranteed prize pool of 5 crore+ and will rope in some exciting additions to make this series more thrilling. Since its inception, the PokerBaazi Premier League has offered the participants a top-notch poker experience.

The leading portal of poker games has decided to walk an extra mile to lend a helping hand to the underprivileged section of the society. This Women’s Day, they announced a tie-up with their welfare partner VIDYA and pledged to make a difference, one step at a time.

Needless to say, the PPL Special Edition is going to create ripples following the CSR initiative adopted by PokerBaazi. The organisers are also expecting better participation compared to the previous years.

PokerBaazi has already started campaigning with the idea #PlayForACause to reach out to the maximum number of professional gamers. In the words of Navkiran Singh, CEO of PokerBaazi.com “The theme of the upcoming series is aiming towards a more balance and thus happier world. 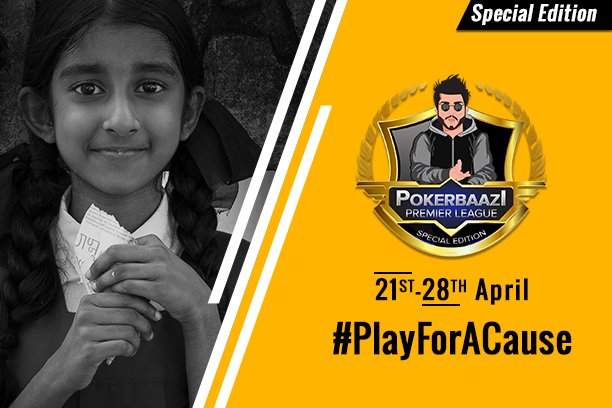 As a part of the program, PokerBaazi will donate a share of the collected bounty towards the education of underprivileged girls along with the expenses for their school uniforms, midday meals & transportation. This is an issue we feel deeply about and our team is charged up to get this noble initiative in play”

According to the organisers, this tie-up with VIDYA will result in more such CSR initiatives by Baazi Games. Initially, 14 girls will be covered by the program, and the company is looking to grow this number in the coming years.

As a non-profit NGO, VIDYA set out in 1985 to help the girls and the underprivileged people of the society. Steered by the unparalleled leadership of Ms Rashmi Misra, VIDYA has already offered welfare programs in five major cities across India, including the remote areas in Delhi, Mumbai, Haryana and Bangalore. The team of VIDYA now comprises of 350 people including a bunch of foreign volunteers.

Since its inception, VIDYA has already garnered support from various public and private organisations. This year, PokerBaazi has come forward for this noble cause. There are so many issues in our society and the denial of food, shelter and education - especially to underprivileged girls, is one of them.

Through this PPL series, they are planning to spread the word, so as to inspire people to come forward and support this cause and make a difference.

PokerBaazi is one of the leading and most trusted gaming portals for making money in real time. Launched in 2014, PokerBaazi offers a variety of games across different stakes, and has recently launched a revolutionary player rewards system and FreeRoll tournament schedule.

With a significant reach in the domestic circuit, PokerBaazi has already become a household name in the Indian poker scenario. Keeping in sync with international standards, the company is growing rapidly and is widely known as India’s Most Trusted Poker Website.