I felt a strange sense of nostalgia when bidding goodbye to the hosts at Alila Fort Bishangarh (AFB). Why did time have to pass so quickly, I thought to myself. The three days that I spent at AFB were like a pleasant dream, which I did not want to wake up from. Derived from Sanskrit meaning ‘surprise’, Alila, true to its name, had offered me lots of incredible memories to cherish for a lifetime! *********
The return flight at Jaipur International Airport (JAI) began taxiing down the runway. I felt a familiar rush of adrenaline as the plane took off, and lo, we were airborne! The creativity that led to the design of an aircraft is no different from the one that transformed a centuries-old defensive fortress into a modern boutique resort (by owner/director trio Rao Rajendra Singh, Suneet Bagai and Atul Kapur), all the while keeping its originality intact, I reflected. Once the flight reached cruising altitude, my mind began recollecting the moments of the past few days...

*********
With a sari covering her forehead and a coy smile on her lips, Daya replied, “You’re welcome” in perfect English. What an amazing grace she has, I recalled. We had just finished eating Bajra ki Rotis laden with a generous serving of ghee, dal (lentils) and a glassful of chaas (buttermilk) and were at her doorstep, saying thanks and waving goodbye.

A native of Bishangarh, her cuisine is renowned as Daya ki Rasoi, and she hosts tourists from all over the world who arrive at AFB, picking up phrases from their conversation. It was the final event of our three-day trip. We returned to our suite, where the host thoughtfully gifted a glass model of AFB as a souvenir, along with a veg sandwich to munch during my chauffeured ride to the airport.

*********
I checked into an 802 sq ft Grand Suite at Level 2 that offered breathtaking and postcard-perfect vistas of Bishangarh village. The restroom was the size of a normal living room, with an enormous bathtub, separate shower enclosure and a full-size mirror. Narcissus might have never left this place, I thought to myself. 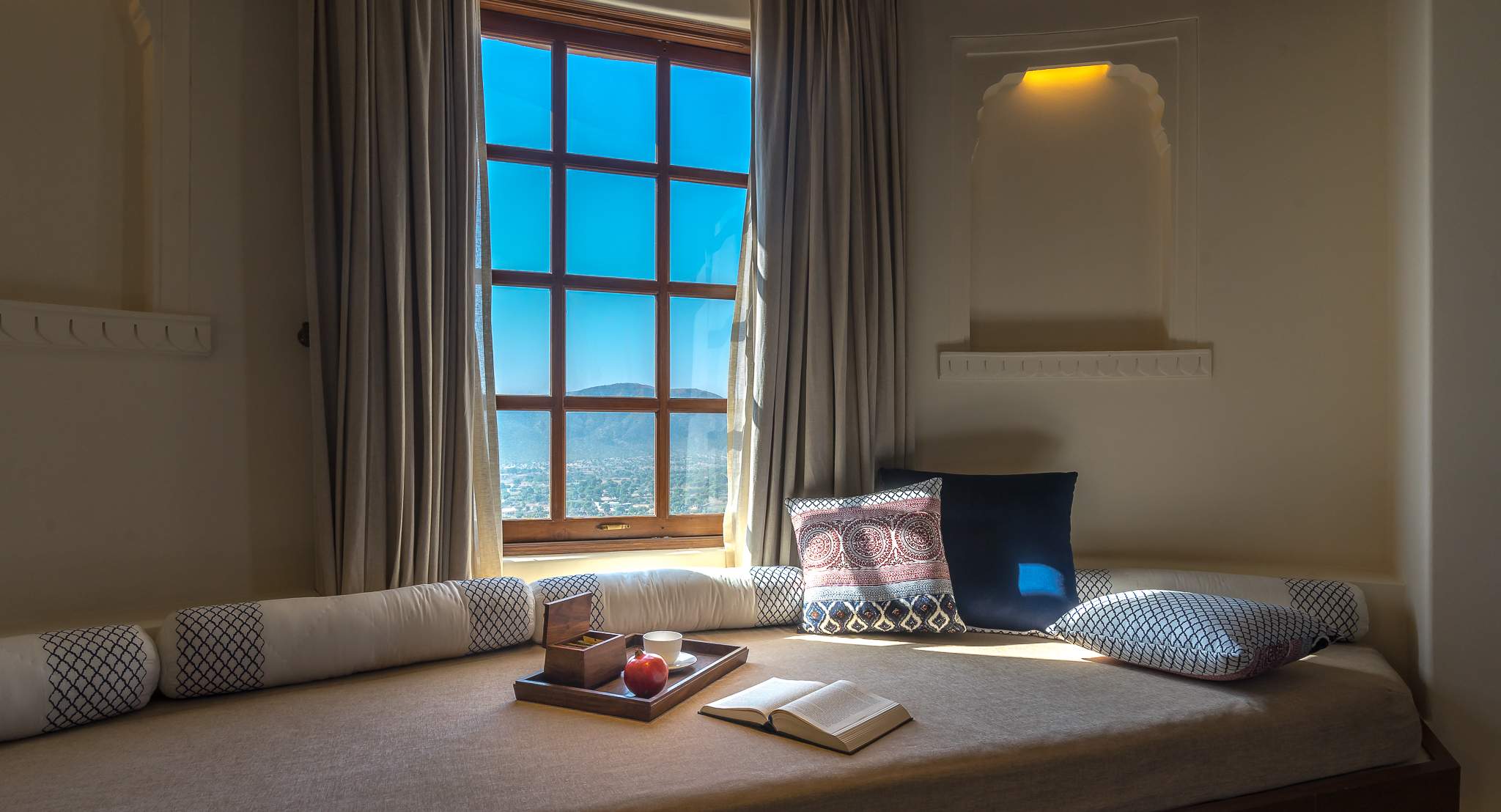 I made my way to Amarsar at Level 4, which was named after the birthplace of the royal Shekhawat clan, for lunch. The restaurant has ornate interiors with Rajasthani ‘thikri’ work and hand-painted wall art. I had Tomato Olive tikka masala, comprising olive-stuffed paneer with cheese and apricot naan, passion fruit and glazed caprese kachumber, which was nothing like I had ever eaten before. 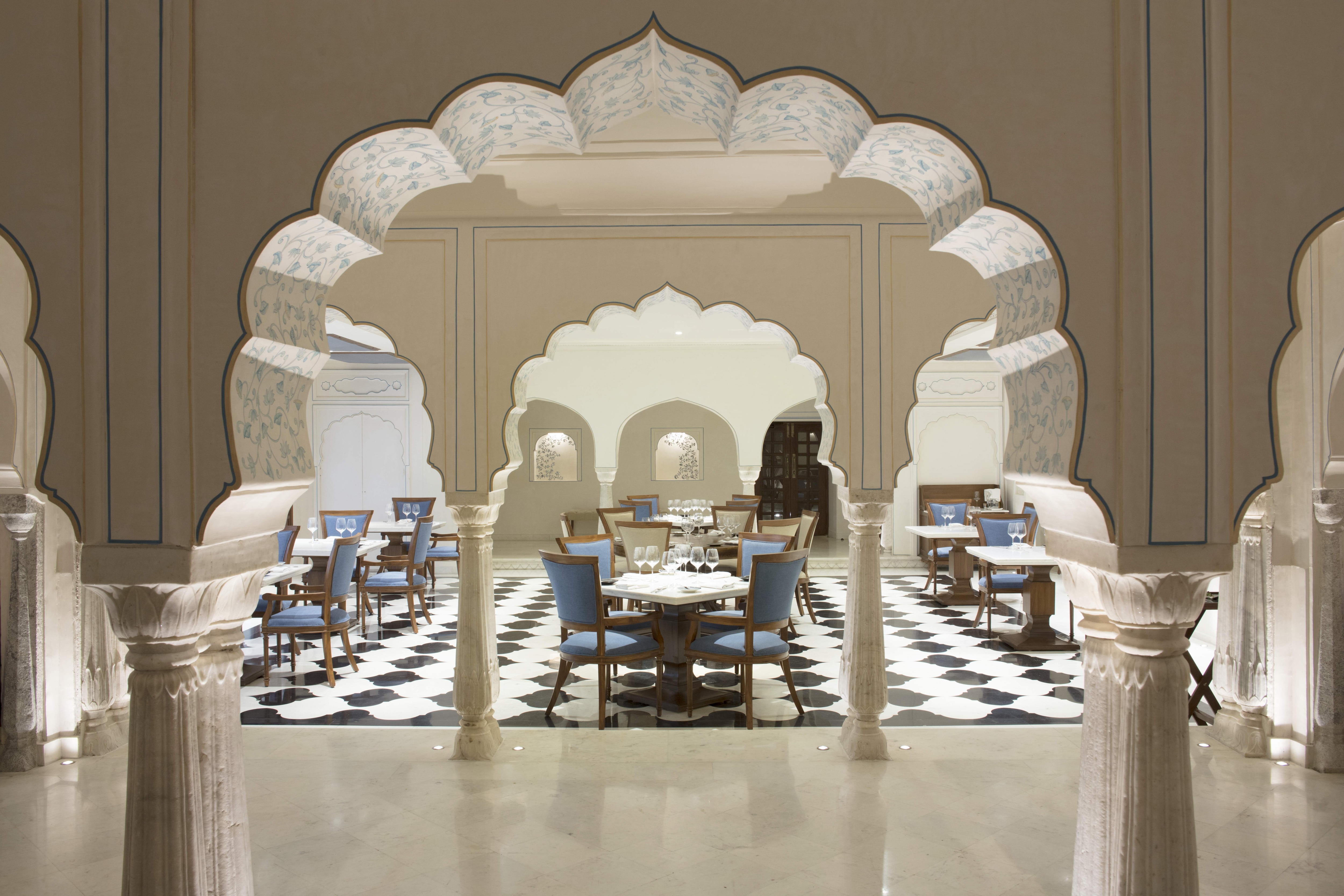 Later, I had ghevar, a famed Rajasthani dessert. I learned that the food concept and menus have been innovatively curated by renowned Chef Ranveer Brar.

After resting for some time, I sauntered out, observing the original rock formations alongside the corridor, as I made my way to the library. Titles by Robert Ludlum, Stephen King and Erich Segal dotted the shelves, along with a few non-fiction books. It was time for my spa session.

*********
“Kids have a wonderful time here. They enjoy playing hide-and-seek in the maze-like surroundings. It’s not a coincidence that in many cases, children know this place better than their parents!” said Regional General Manager Siddharth Savkur. Drinking chilled beer and listening to his anecdotes at Madhuveni, a bar and cigar room on Level 4, two hours seemed to pass by in minutes. I noticed that the place has openings in its two-metre stone walls and learned that they were designed for aiming muskets and pouring out hot, boiling oil on intruding armies below. These have been kept open to promote a natural system of air-conditioning, informed my host.

Later, we dined under the stars at Nazaara on Level 6, where Chef Rajat Chandna showed us live sand pit cooking - marinated chicken is wrapped in a banana leaf, covered in aluminium foil and placed in a utensil filled with sand and cooked on a low flame. Frankly speaking, that was the first time I’d ever heard of or seen such a cooking method! And the dish was named appropriately - Zamini Murgh! 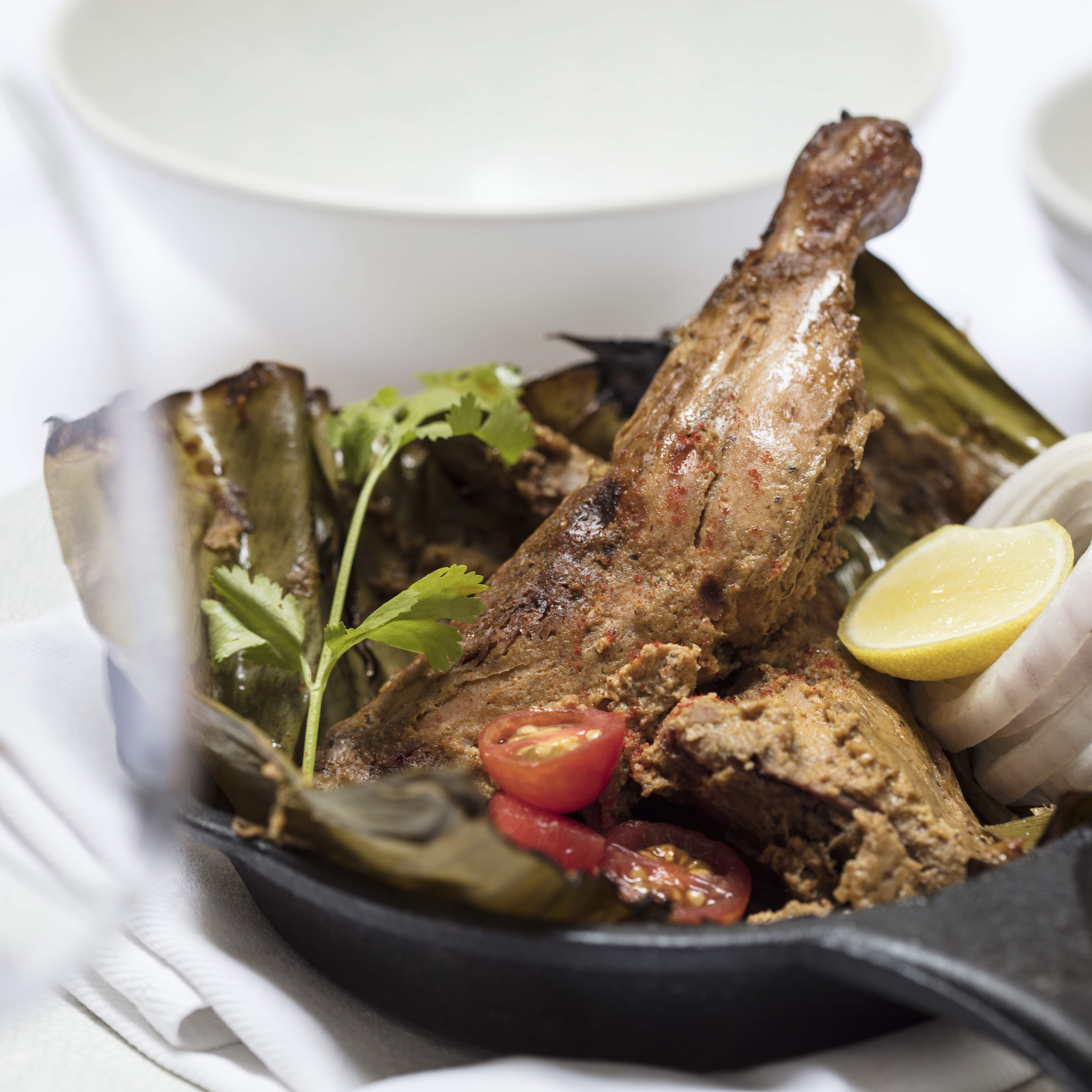 *********
As masseuse Thari dexterously kneaded the stiff muscles of my upper back, a wave of relief flooded my body. The 60-minute full-body Therapeutic Spa (Rs.5,000) treatment at Spa Alila consists of ‘Sayang Sayang’, a  series of nurturing movements that calm not just the body, but also the mind and spirit. She first performed a foot wash, and followed it up with an elaborate body massage after applying relaxation, a mixture of lavender and olive oils. I emerged out of the session rejuvenated and looked forward to having cocktails at Madhuveni on Level 4. 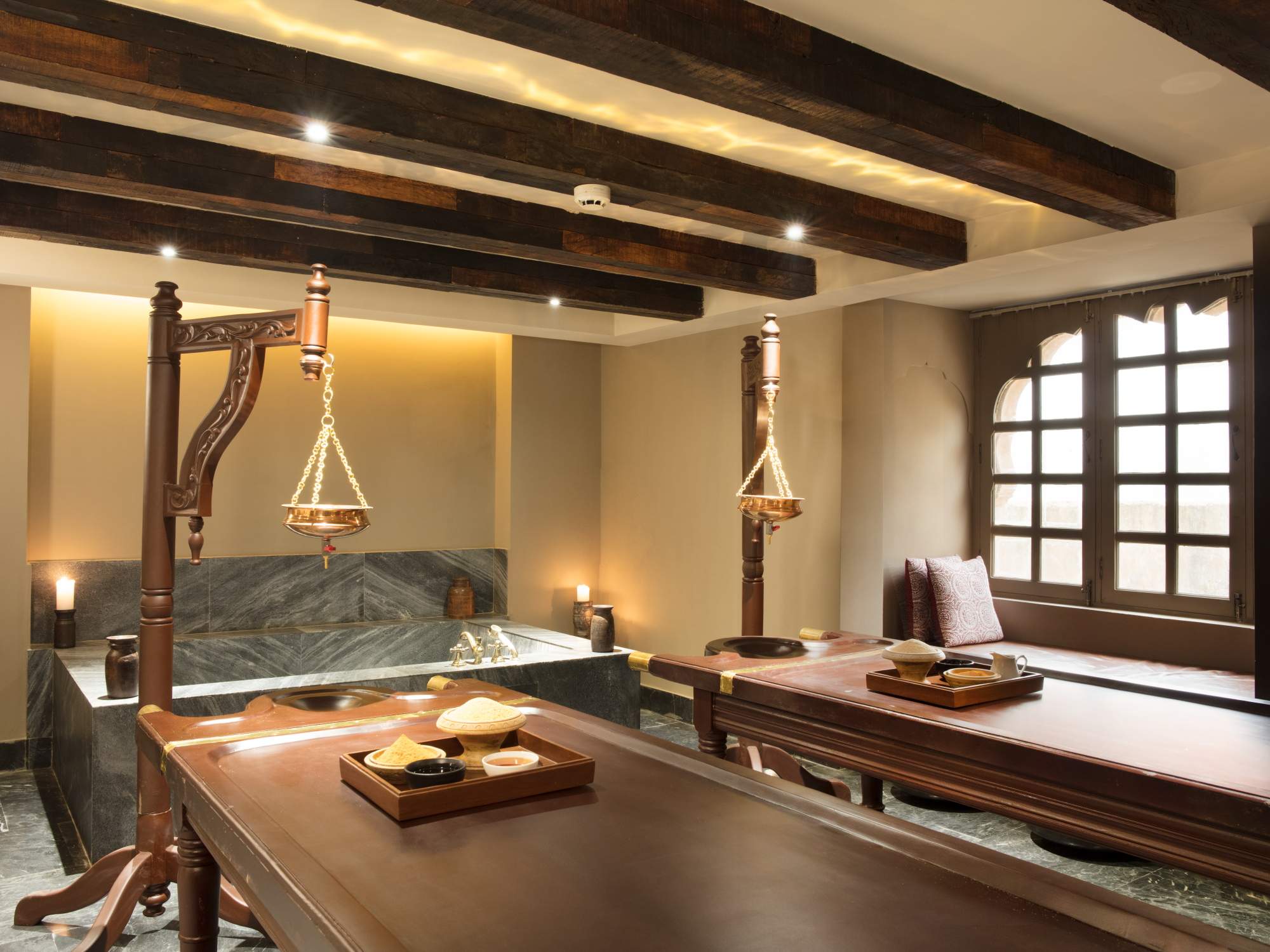 *********
I woke up to the sound of peacocks screaming. What a natural alarm clock, I thought, as I got ready and
made my way to Kachchawa Deck on Level 2 for breakfast on the second day. The Deck overlooks the lush spa gardens, with a panoramic view of Bishangarh. I hadn’t had pancakes in a long long time, so I feasted on them with abandon, and ate the good old Poori Bhaji as well. 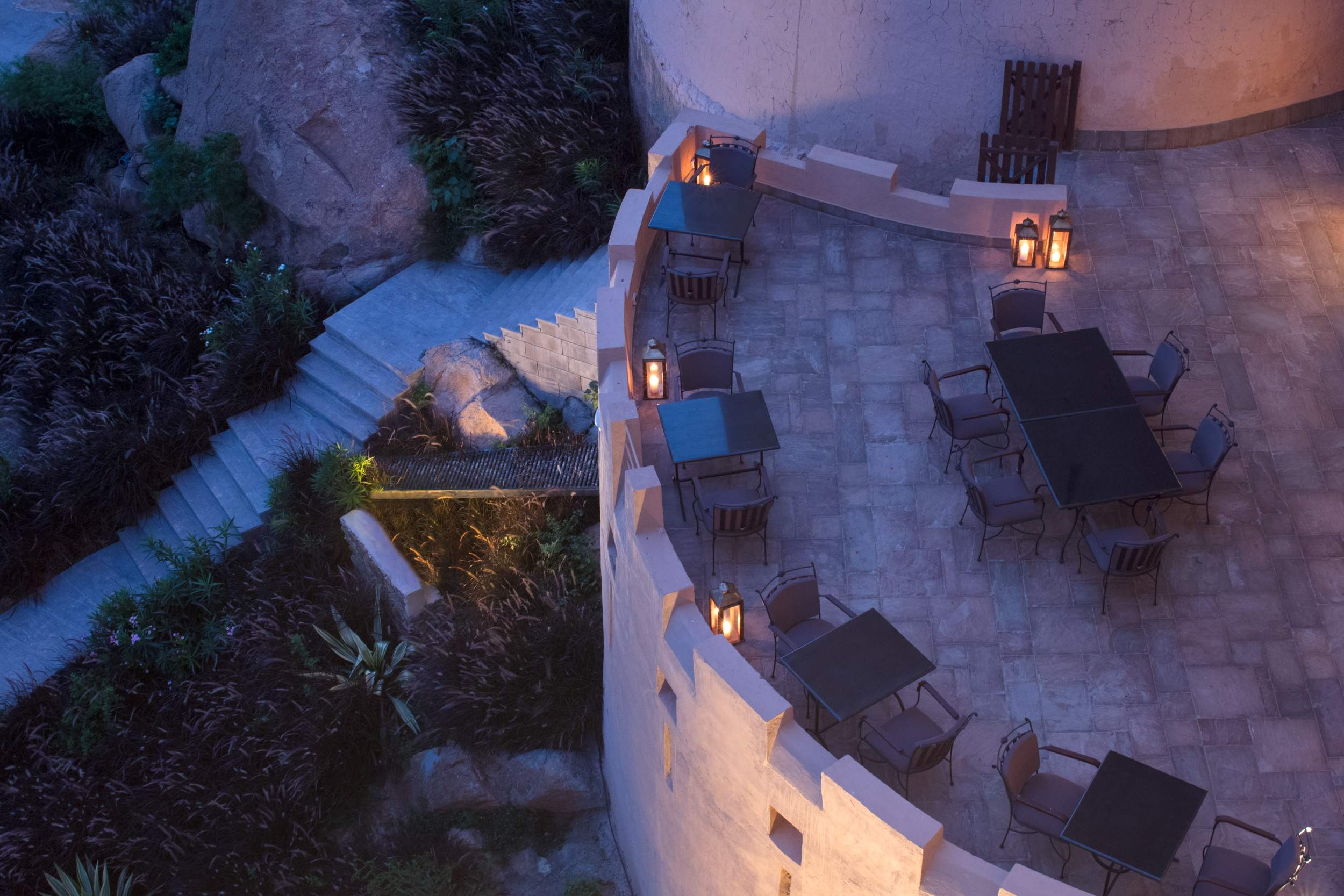 Afterwards, we set out to visit the 4,000-year-old Kalka Mata (Kul-Devi of Amarsar) temple situated 500 metres above sea level. Simians chattered excitedly and kept jumping on the temple’s tin shed, curious about the visitors. Thankfully, they did not grab my spectacles, as I had feared. We took the steps on our way down, instead of the car. An estimated 500 of them, said, my host.

*********
I was jolted from the reverie by the turbulence, which caused the aircraft to shudder for a few seconds, on and off. Cumulus clouds were all around us. It was still a good 30-minute journey to Hyderabad. The pilots deftly manoeuvred the plane, and we were above the clouds, with the sun shining bright.

*********
After the temple visit, we had a masterclass session at Daawat on Level 5 by Chef Rajat, who taught us recipes of tomato shorba, multi-grain roti, ker sangri (a unique Rajasthani dish of shrub berries and beans), kadhi murg and fig & almond phirni. Afterwards, I had a hearty lunch that included multi-grain roti, paneer makhani, dal tadka and steamed rice. 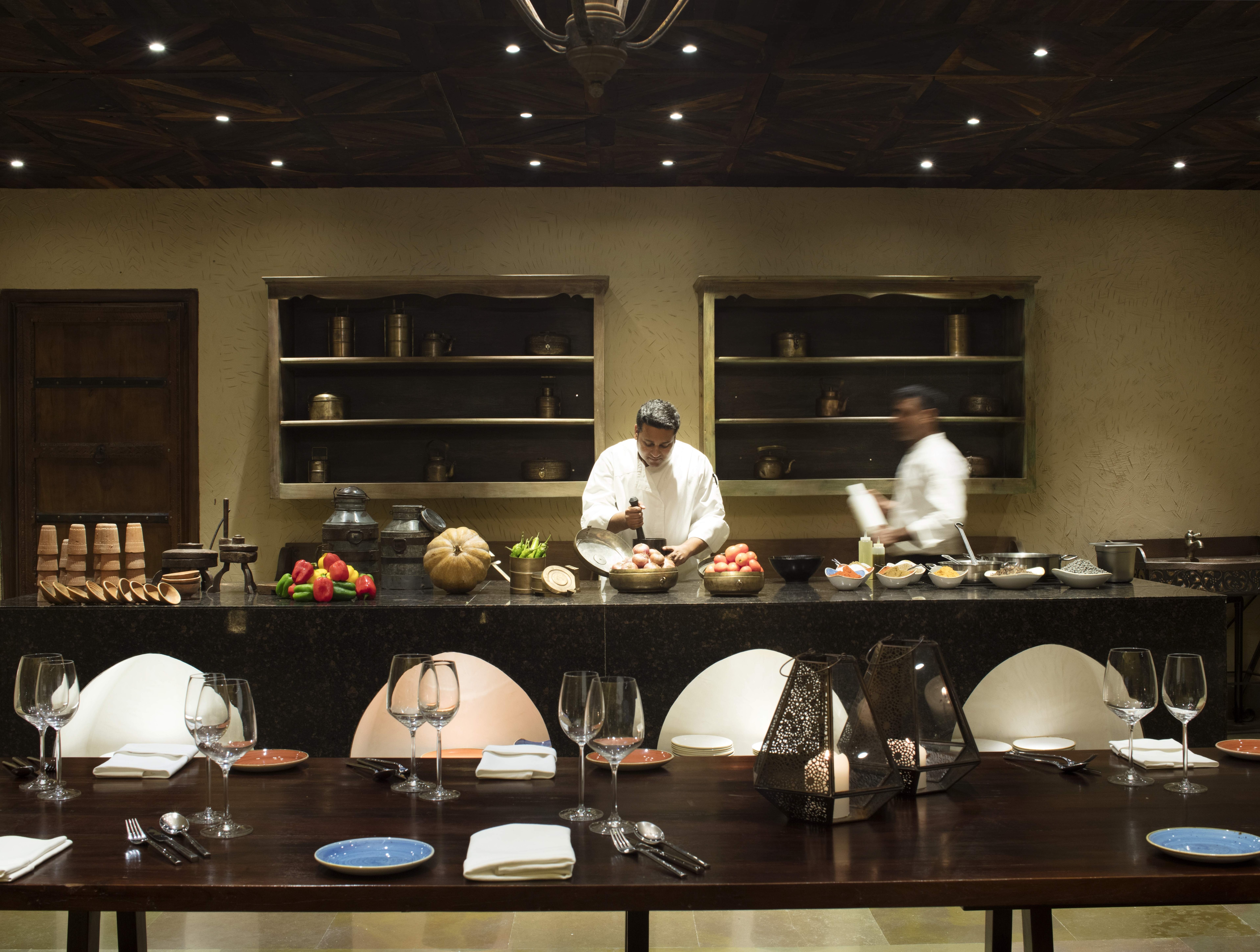 Later in the afternoon, we were shown the different suites in the fort by our tour guide Himadri. At the cocktails session on day two, Host Manager Sunaina Sharma Manerker regaled us with her tales. Other activities here include off-road ATV drives, camel cart rides across Bishangarh, trekking in the Aravalli Hills, hot-air balloon and helicopter rides, she added. After the lively chat, we left for Amarsar for dinner, where I had a delicious khichdi.

*********
On the final day of our visit, General Manager Vijay Krishnan interacted with us warmly.

We were then off on a whirlwind tour of Radheshyam Jewellery shop, whose owner has been making silver and gold jewellery for over three decades. Next, we proceeded to see a local carpet weaver working on the yarn, and later, tried to make pottery by observing a professional artiste. To my surprise, I was able to create a small object that resembled a cup… well, almost! Next, we proceeded to the house of Daya, a Bishangarh farmer who cooks mouth-watering dishes on her ‘stove’ using wood as fuel.

*********
I was received at JAI by AFB's courteous chauffeur. It was a pleasant 90-minute ride. As we neared our destination, I got blown away by a sight. To my left, an imposing fortress arose from the plain landscape. It was built during Rajasthan’s royal era as an outpost guarding the kingdom of Jaipur (Amber) against invaders from the North, the driver told me. We took the snaking ramp up the fortress, passing by a pool, and alighted at the Haveli Lounge. 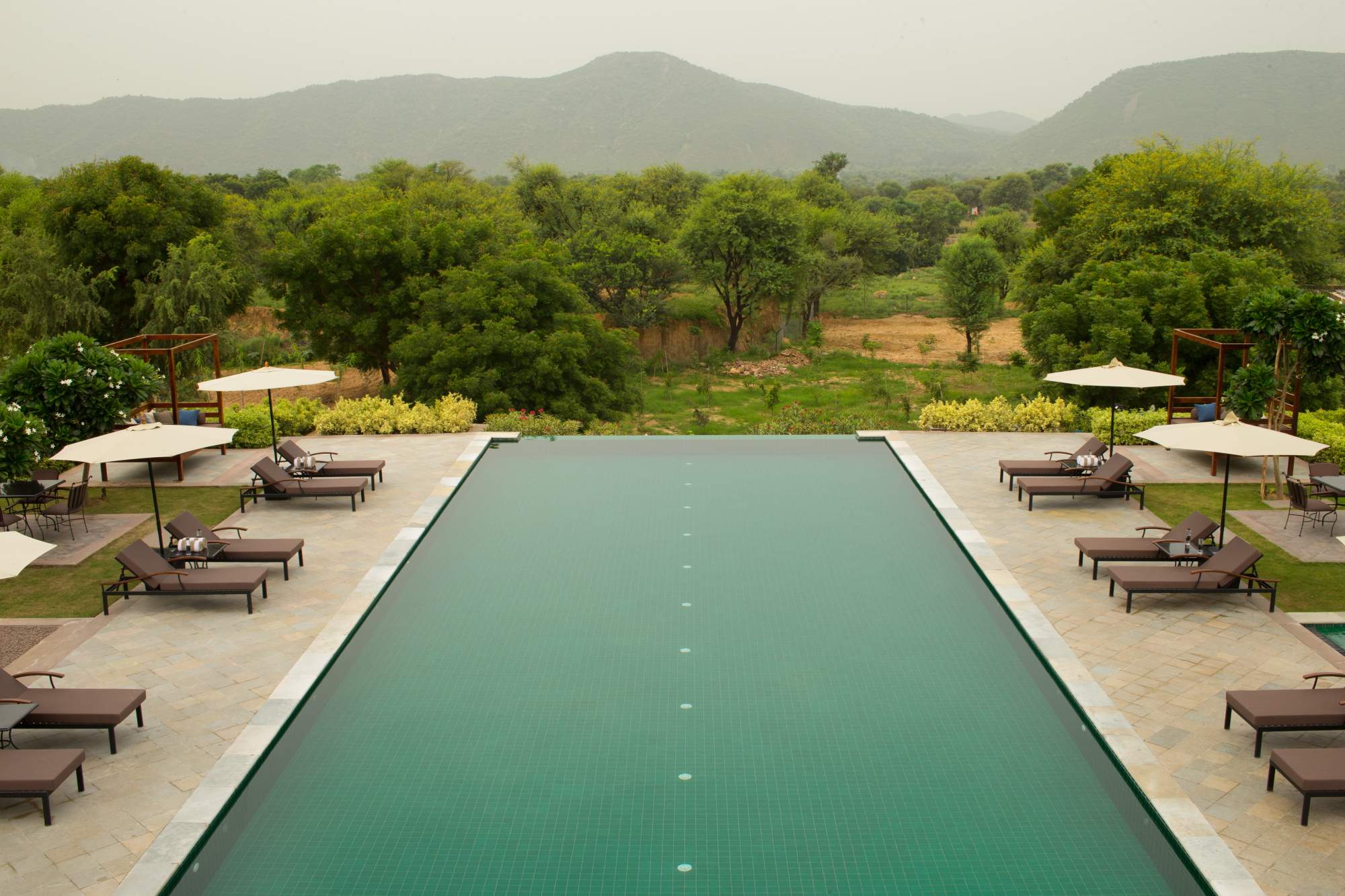 Sunaina received me warmly. I was offered a Rooh Afza welcome drink and a brief orientation of the next three days. I strolled to have a look at the nearby gymnasium and a kids play area that included Foosball, Carroms, Snakes & Ladders, and a host of other board games and comics.
Time to check in, I thought.