The Conrad Bengaluru stands tall, its gleaming metallic facade, stark against the cool blue skies. The high rise looms over the iconic Ulsoor Lake and dwarfs its neighbour, the gurudwara, a landmark in central Bengaluru. We took this all in as we drove up to the entrance of the 24-storey building on a crisp Thursday afternoon to experience the legendary luxury and hospitality of the hotel chain which also has properties in Hong Kong, Macau, Tokyo, New York, London and Dubai  among others. The grandeur of its structure, is no match to the warm welcome we received — a traditional Indian one, complete with vermilion and a tall fruity drink. The lobby is defined by a large abstract painting sourced from Germany, solid marble pillars, a large statement chandelier and textural warm sand-hued walls. A quick check-in later, we found ourselves in our plush 12th-floor room with sweeping views of Ulsoor Road and the magnificent Ulsoor Lake — an oasis of calm, amidst the chaotic traffic. All 285 guest rooms at the hotel face the lake, ensuring everyone has a beautiful view of the waterbody. 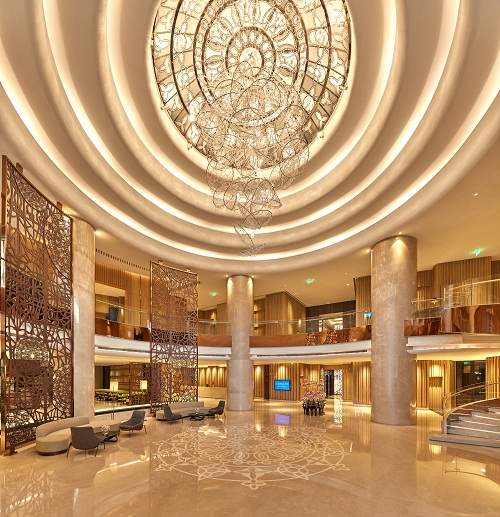 Keeping it fresh
Having checked out our marble-floored room with ceiling-to-floor windows, a 42-inch HDTV and luxurious bathtub, we made our way to one of their five restaurants, Caraway Kitchen for some lunch. Helmed by chef Praveen Shetty, it is designed in keeping up with the theme of understated luxury that the hotel stands for. The cuisines span Indian, Italian, American and East Asian, with food displayed in market-style stalls. Every cuisine has a dedicated live counter, so rest assured everything on your plate is fresh. We sampled two salads — bocconcini with cherry tomatoes, which was nothing short of delightful, and pomegranate, black grape and quinoa, a burst of fresh, fruity, tangy and nutty flavours. Small portions of chaat, dosas, pasta and noodles were had in quick succession and each dish did not disappoint. We had the choice of spending the time between lunch and dinner either taking a dip in their outdoor pool or taking advantage of their specially curated city tours, with itineraries that are one, three or five hours. It being a balmy afternoon, a quick swim was in order and we made full use of the pool, working off all those calories consumed at lunch.

Dinner saw us at Mikusu, their Asian restaurant. Sushi obsessives will love the options they have on offer, from Ika sashimi to Unagi nigiri. One may also choose from gyozas, curries, tempura, yakitori, rice and noodles. Following this Asian sojourn, we turned in for the night, but not before a long hot soak in the tub, while catching an old episode of F.R.I.E.N.D.S on the mini television installed in the bathroom. 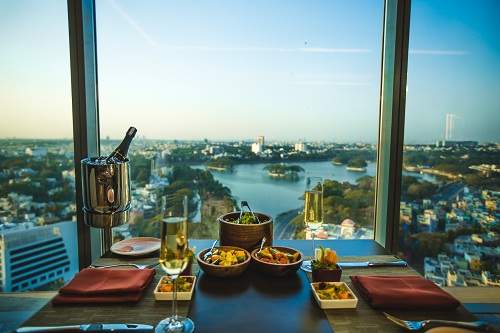 Breakfast the next day was at Caraway Kitchen and we’re happy to report that the spread was as good as lunch the previous day, if not better. With nothing planned before lunch, we headed back to our room to get some extra sleep and maybe do some reading.

Royal repast
A few hours later, we assembled at the opulent Indian Durbar. The decor is decidedly royal to match the theme of the menu. The gold leaf jali work installations will transport you to the palaces of maharajas from history books, but if you miss this reference, the food will certainly get you there. Borrowed from royal kitchens across India, the recipes are authentic. The tasting started with an assortment of kebabs. This was followed by a selection of rotis like Khamiri Roti with curries such as Nizami Murgh Korma. The mounting food-induced guilt aside, every dish was on point and well received. The heavy lunch had us skipping tea but come dinner we were still not quite in the mood for another round of food sampling. We  delayed it as much as we could, but finally found a table by the poolside at their al fresco restaurant, Tiamo. The beautiful terrace, with greenery and calming water features, is enough to draw visitors but the food is also equally appealing. Specialising in Mediterranean cuisine, on offer are mezze platters, salads, pasta, risotto, cheese, burgers and pizzas. The moonlit setting was the fitting end to our staycation, but we’d be lying if we said we didn’t want to extend our stay. Shacking up, if only for two days, in the tallest hotel building in South India does have its perks after all.

The writer stayed at the hotel on invitation from Conrad Bengaluru