As the fourth edition of the Tamil Nadu Balloon festival took off this January at Pollachi with an international focus, all of a sudden, hot air ballooning seems to be the hot new trend in adventure sport.

Besides trial runs in Amaravati, Agra and the Rann Utsav, the annual calendar is now full with regular ballooning events at Pushkar Mela and Rajasthan thanks to SkyWaltz, one of the pioneers in the field.

Be it a balloon safari over the lush Sahyadri range at Lonavala, and the rugged Aravalis above Jaipur, or flights on request at Neemrana, Manesar, Udaipur and Ranthambhore, the main safari season (December-March and September-November) is busy with morning and evening flights.

All this does seem like the stuff that real adventures are made of, and as people from across the globe throng the festivals closer home, we got some first-hand experience for ourselves, at Araku Valley in Andhra Pradesh, a location surrounded by the thick forests of the Eastern Ghats, which is fast gaining recognition as a prominent destination for the sport.

‘For crazy people’
“A hot air balloon is the only vehicle in the world without a steering wheel, motor and brakes. It’s crazy, meant for crazy people…” says Johan Vander Meiren from Belgium, with a laugh.

We were in conversation with the world’s top balloonists at the international Araku Balloon Festival in Andhra Pradesh. A total number of 16 balloons from 13 countries were participating, and all their heavy equipment had been air freighted and transported to Araku Valley.

The added attractions were the special shaped balloons — Iwi the Kiwi from New Zealand, the seahorse-shaped Neptuno from Brazil, and Bee, manned by Luc de Wulf from Belgium.

After a couple of nights of music, titled ‘Sounds On Sand’ at RK Beach (where Luc gained notoriety as the ‘dancing balloonist’ for his antics on stage), we then drove into misty Araku Valley.

To host the international pilots and media, a specially designed camp with 40 luxury tents was set up at Bosubeda in a clearing amidst green paddy fields, bright yellow flowers and colourful flags fluttering in the breeze.

Organiser Samit Garg from SkyWaltz and E-Factor says, “The Araku Balloon Fest is a unique tool to promote Araku Valley as a tourism destination and highlight its lush landscapes and waterfalls, fields and valleys, eco-friendly environment and friendly people. We came here three weeks ago, scouting for a campsite.

A farmer, who was about to harvest his crops, agreed to lease this patch. The whole camp was set up in days! We hope after this event, Araku will find a place in the minds of thrill seekers.” Floating on nature
Johan had clocked a thousand flights in Europe, and has been flying over the historic cityscape of Bruges for the past 12 years. During winter, day temperatures are constant, allowing longer flights over the Alps.

“In today’s age, everything is programmable or as per a schedule. Hot air ballooning is not. You float on nature. That’s the reason I enjoy it.” His hometown Beselare or ‘Village of the Witch’ has a witch festival, and he’s currently developing a balloon shaped like a sorceress!

Luc confides that he found inspiration from his grandfather, who often talked of flying. “I made my first balloon when I was 10 years old, by heating a piece of plastic with a hairdryer.” Luc has ballooned in Israel, Thailand, Cambodia, Mexico and Dubai.

“When you land, the people are so friendly, we’re treated like kings. A balloon ride is something special and often booked for a birthday or anniversary. Imagine, it’s sunset... a nice landing place — we set up a pop-up café with champagne, cheese, and cheekily ask our passengers, ‘Didn’t you do this yesterday evening?’ They wail, ‘No’! ‘Exactly!’ So, every day is a new experience, and not everything is commercial. We spend a whole fun evening together. Why go to a café or bar when I meet so many people through ballooning?”

After dinner, we retired early for our morning tryst. By dawn, the camp was abuzz with pilots getting their gas cylinders filled with nitrogen. Karimulla Syed from Guntur, the only balloon pilot from Andhra Pradesh, was overseeing the fuelling operations. “We don’t have propane in India, so commercial LPG cylinders are used and pressurised with nitrogen,” he explains.

Though non-motorised, the balloon is still an aircraft, so it requires registration, licenses and permissions from the Directorate General of Civil Aviation, Airport Authority of India and local Air Traffic Control. Karim started ballooning as a hobby, and has flown 800 hours across 15 countries. Flying for pleasure
It was a short drive to the launch site, and the atmosphere was electric. Numbered jeeps rolled onto a grassy clearing, and each passenger was given a boarding card with the number of the allocated balloon.
We caught up with other participants while they were unloading baskets, setting up equipment and inflating the colourful balloons.

Paolo Bonanno from Italy has 37 years of ballooning experience and is the leading authority on burners. He chugged at his trademark pipe and looked up ruefully at the grey sky. “By rule, the maximum permitted wind speed is 10 knots,” he explains. “The perfect condition is, no wind on the ground and soft wind in the air. The landing is most important. We fly for pleasure and avoid taking risks.”

His wife Nicole adds, “There’s a popular saying: ‘Better to be on the ground and say, I wish was in the air, rather than to be in the air and say I wish was on the ground!” Their words seemed as dark and foreboding as the low-hanging clouds, but we laughed.

Paolo originally made automatic machines for industrial textiles and created a balloon just to win a challenge. Back in 1980, there was no concept of ballooning. For two years, the police followed him around to confiscate his balloon!

Now 73, he plans to continue flying for the next 30 years, Paolo says with a twinkle in his eyes. He has flown in Sri Lanka and the Philippines, but this is his first time in India. At Albuquerque, the organisers said he couldn’t smoke in the fields, so he lit up the moment they were off the ground. “No Pipe, No Fly,” he says, tapping on his badge, with a chuckle.

Spaniard Josep Llado from Ultramagic started 30 years ago with a balloon trip across Africa. Be it Albuquerque in USA, the world’s biggest ballooning event with 650 balloons, or a small event like this, each has its own charm, he says.

“It’s freedom — you forget about terrestrial problems,” he says with a laugh. “We’re in an era where we like to control everything. With ballooning, it’s very difficult, but you can adapt. There are different wind directions at various altitudes, so you can change levels. Early morning or evening is better for flying, as the wind is calm and the temperature cool, without any thermals, making it easier to control the balloon.” 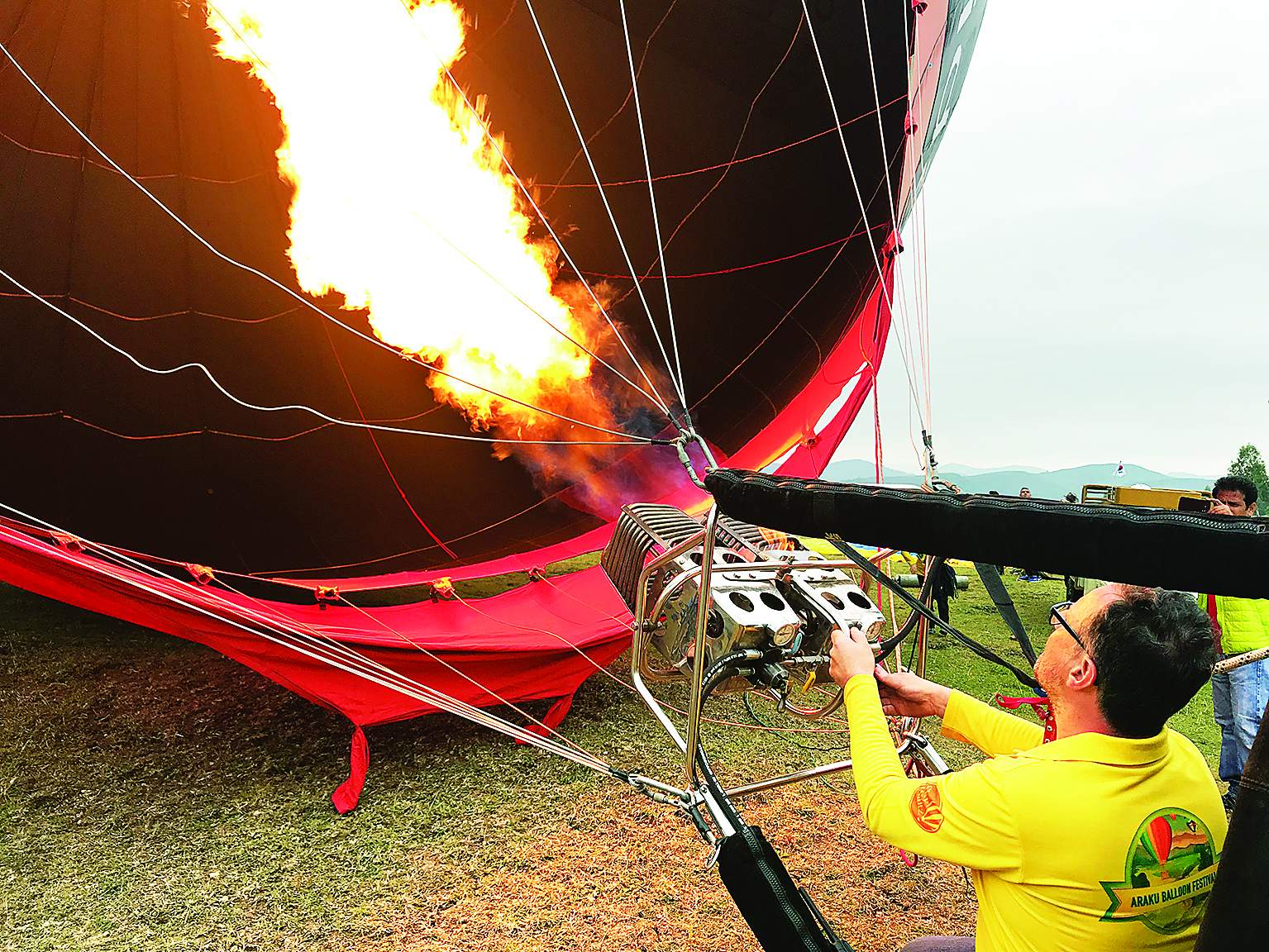 Blowin’ in the wind
Ballooning as a sport started in the late-1960s and grew in the early-’70s in the UK and US, before spreading to other places. Josep had flown over Kilimanjaro, India Gate in Delhi and the Taj Mahal at Agra, besides Jaipur, Pushkar and Ranthambhore.

“Flying in India is incredible and very colourful. As you fly over a city, people throng the roofs and there’s always a big crowd when you land. In Africa, there are photographic safaris over lions or elephants. In Myanmar, you fly over temples. In Cappadocia, Turkey, ballooning started in 1992 and today is a big business catering to hundreds of tourists. India is huge, and I’m sure there will be fantastic panoramic places for ballooning.”

“There are so few moving parts, what could possibly go wrong?” — piped in Peter Dutneall with characteristic humour from Down Under. His balloon was called Zoz. “Not ’coz it’s from Oz, it’s my registration number!” he said. “What I love about ballooning is that it puts smiles on people’s faces.”

The wind had stopped and the smiles were coming back on. Huge industrial fans had inflated the balloons and burners fired them up with hot air. Last minute instructions were handed out — clutch the ropes inside the basket, bend the knee when landing, hope for a soft touchdown!

Josep was the first to fly out, followed by Marc Blazer from Switzerland, Izzati and Atiqah Khairudin, the intrepid  ballooning sisters from Malaysia, who run the annual Putrajaya Inter-national Hot Air Balloon Fiesta, Kevin Chassa from France (whose mom was the first female balloon pilot in France) and Rick Astral and John who fly Iwi the Kiwi.

Rick, who relocated from New Zealand to Santiago, is candid. “There’s so much stress in life, ballooning is all about enjoyment. I’ve flown the Grand Canyon, Yellowstone Park, even landed in an airbase to shoot against some F-16s. I was a Cheeky Kiwi who just wanted photos of balloons in dramatic places!” 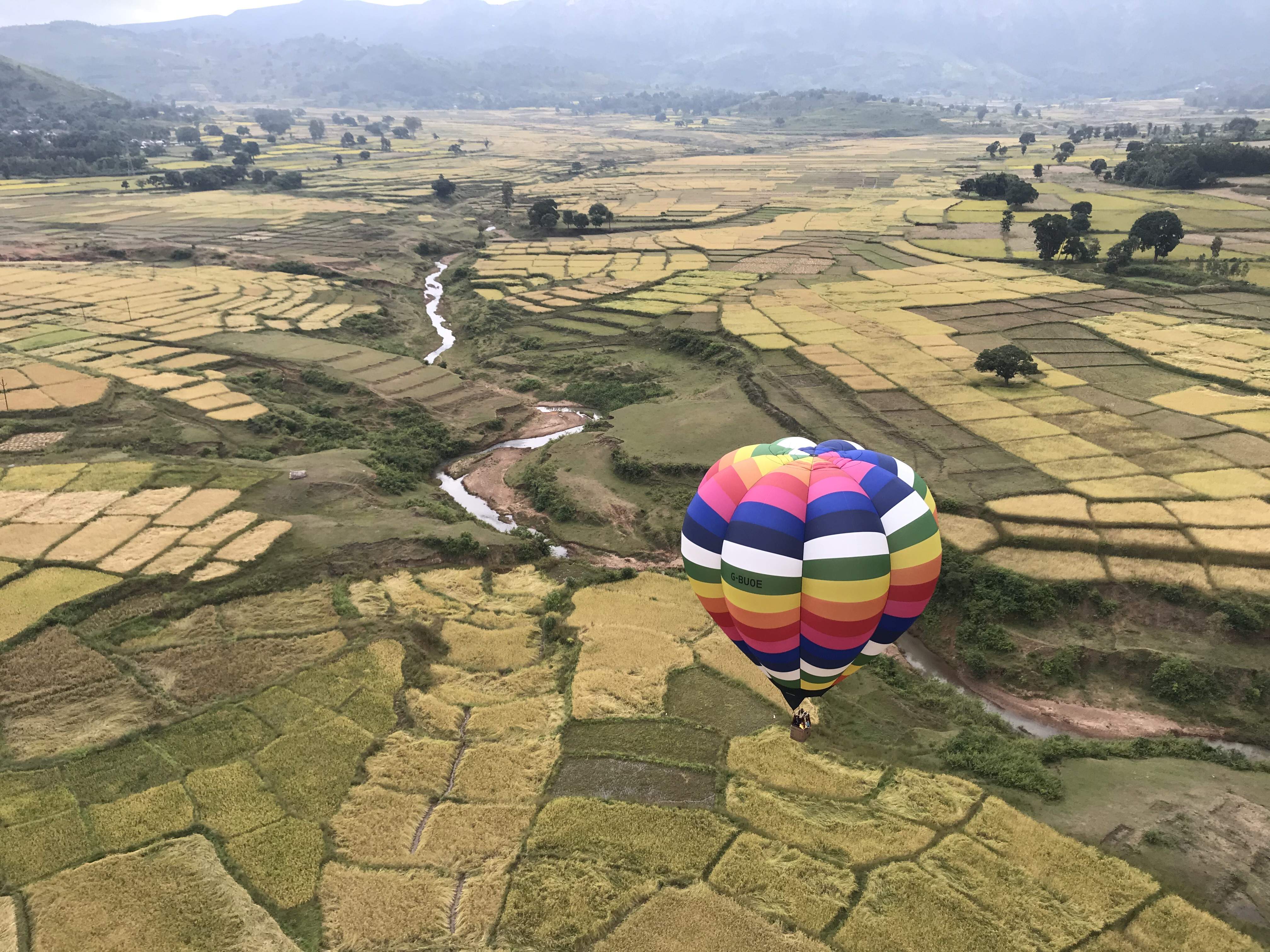 Wild blue yonder
As our pilots fired up with a loud whoosh and hiss of fire, we clambered into our baskets and were off, waving at the screaming crowds below. We rose above the mesmeric patchwork of green and gold fields, noticing streams and grey blue hills that ringed the valley and other vibrant balloons mid-air.

Now and then, a paramotorist swooped around us in hypnotic curves. Farmers stopped their work and
children waved agog! Ballooning was as much about the flight as a foolproof exit plan. One had to watch out for low hanging powerlines, forests and hilltops.

The most important thing was a flat patch of land and proximity to a road for the crew to easily recover the equipment. Our smooth landing could put an Airbus to shame as we headed back to the camp for breakfast, jabbering about our experience.

The day was free to visit the Tribal Museum and Coffee Museum in town, Araku’s coffee plantations and tribal hamlets. Near waterfalls like Chaprai, local women sold barbecued chicken and fish on wooden skewers.

That evening, thousands of locals and tourists converged at a large ground to witness the Tethered Flights and Night Glow balloon spectacle. Later, the party continued at the camp, with lilting folk tunes and an energetic Dhimsa dance, performed by women of the Nookadora tribe. 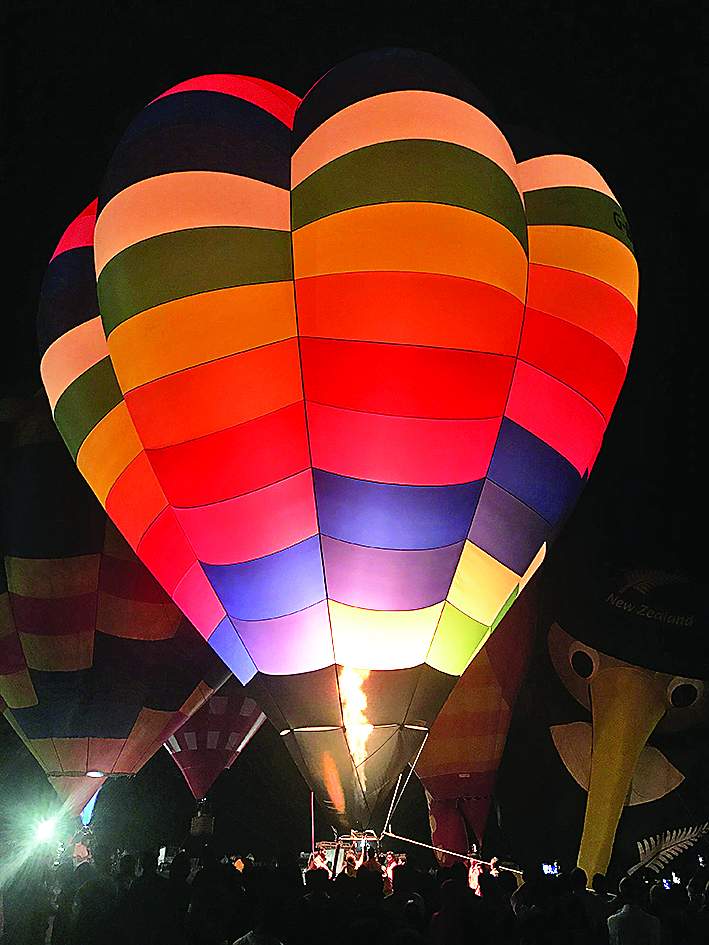 The perfect local base
Kaushik Mukherji, consultant for AP Tourism, explained that Araku is one of the many wonders in Andhra Pradesh.

“There are temples with floating pillars, ancient Buddhist sites and 500-year-old Dutch cemeteries. We’re creating different experiences for different customer segments, and an event calendar from October to March. There’s horseracing on the beaches at the Vizag Stud Million, while the Yacht Pentagonal in mid-February will be one of its kind in Asia.”

On our return, we stopped by at the fascinating Borra Caves, discovered by British geologist William King in 1807. Deep in the bowels of the Ananthagiri Hills, we encountered the most incredible stalactites and stalagmites besides formations, created by the subterranean Gosthani River. Roadside stalls sold Bamboo Chicken, cooked in hollow stems “without oil or water”.

At Vizag, the brand new Fairfield by Marriott, just off the Araku highway and near the airport, was the perfect base for our local explorations. We also got our fix of local Andhra cuisine — Nellore chepala pulusu (fish curry), Gongura Mamsa and desserts like pootharekelu.

A befitting tribute to Vizag’s maritime history, the INS Kursura is a fascinating museum inside a retired Russian submarine. We drove north to the Rushikonda Beach, the Buddhist sites of Thotlakonda and Bavikonda, and the port town of Bheemli.

Not far from the ancient Dutch cemetery, it was startling to see the same Gosthani River descend from the Araku hills and flow into the sea. Life had come full circle, like a giant hot air balloon.

Getting there
Araku is 112 km/3 hour drive from Vizag via Simhachalam and Srungavarapu Kota.
Borra Caves is a 6km diversion off the main road to Araku and 30km before it. Bheemli is 30km north of RK Beach in Vizag. 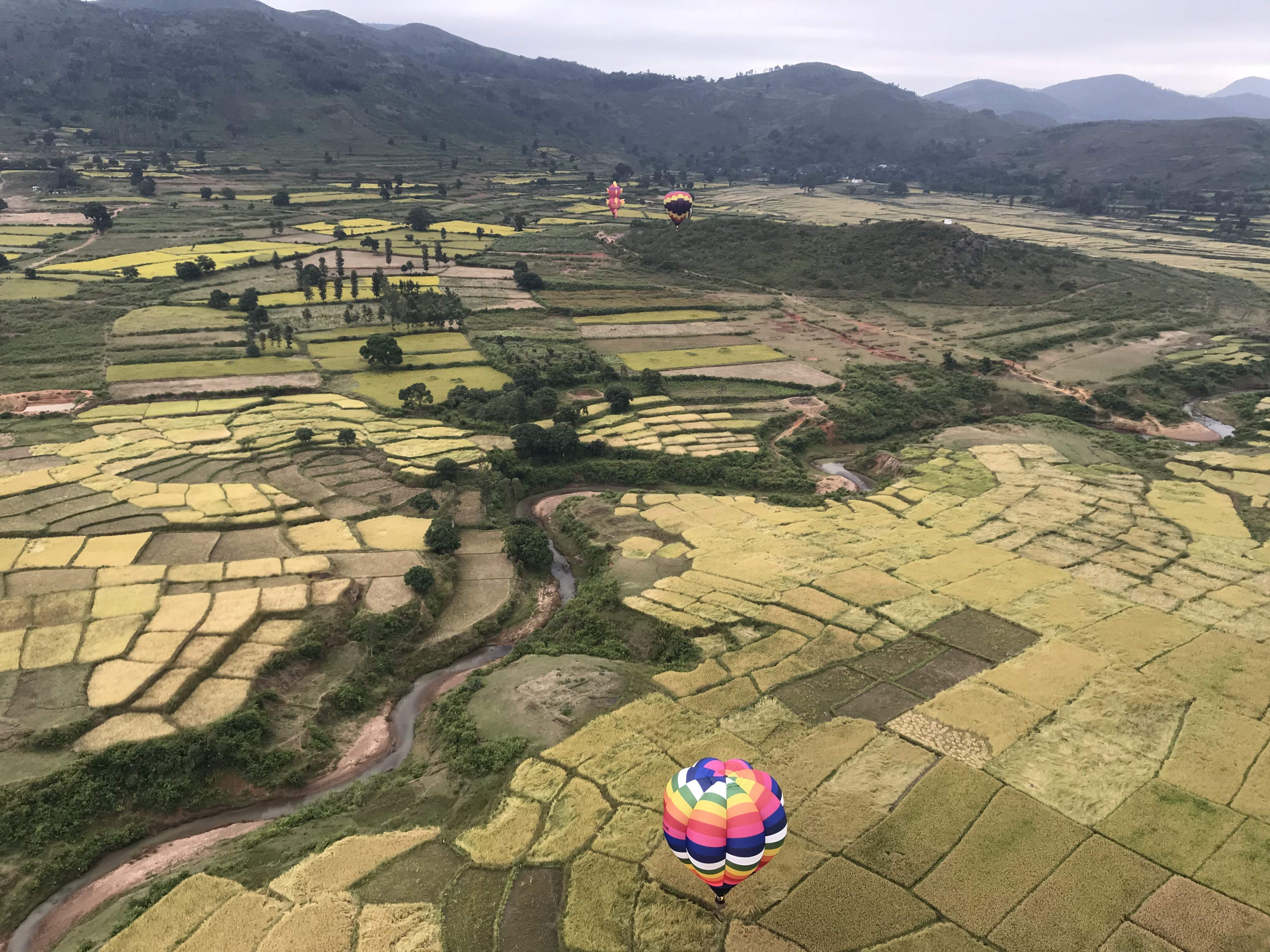