From food to uniforms, Vistara's Retrojet is a recreation of Tata Sons' first airline from 1932

IT IS ALMOST ironic that of all the people, an extremely nervous and anxious flier like myself got the opportunity to witness the Vistara’s Retrojet, which was unveiled last year. A joint venture between Tata Sons and Singapore Airlines, Vistara rolled out the Airbus A320neo with a unique retro-livery (paint scheme) a first of its kind in India, to celebrate 150 years of Tata Sons and their founder JRD Tata —  the scion from one of India’s most prolific families,  and a gentleman who earned the moniker — the father of Indian civil aviation.

Making history
My journey entailed flying from Delhi to Goa, and then back from Goa to Delhi to get a wholesome experience of the retro flight — everything from food to hospitality. Having never flown Vistara before, I was excited for what the airlines had in store — after all, they were celebrating not just 150 years of Tata Sons, but the 86th anniversary of Tata Air Services, India’s very first airline. That aircraft was piloted by JRD Tata himself, and was the first to fly from Karachi to Mumbai via Ahmedabad, in 1932, on a single-engine Puss Moth, carrying a load of airmail. It was this flight that was later renamed in 1946 as Air India, after the brand was nationalised. 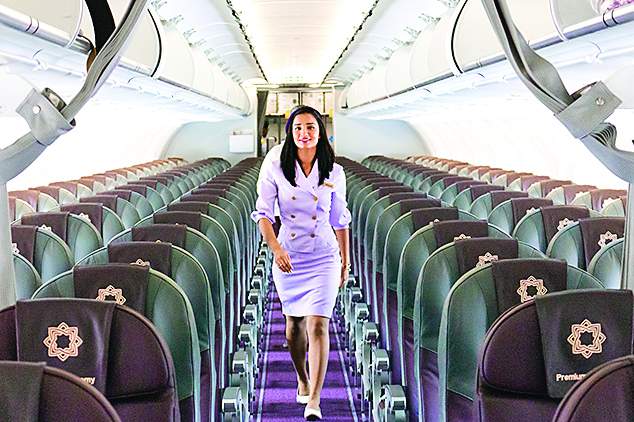 As I read up about this vintage airline and its rich history, I landed in Delhi from Chennai, on a rainy February morning where I was welcomed by the staff who deliberately chose a bus gate for the aircraft, rather than an aerobridge just so that we can get a good look of the aircraft’s exterior before boarding. While the original VT-ATV aircraft read Tata Airlines on its fuselage, Vistara’s VT-ATV reads Tata Sia Airlines, which is the airline’s registered name.  We are also told that the metallic look is painted with a special coating, which, with the right lighting, gives it a old-world sepia tone.

The first thing that will catch your eye is the crew wearing the vintage Tata uniforms in lilac and lavender. These are interpretations of the original outfits from 1950, which were recreated for the occasion. The interiors of the flight are a visual splendour,  and the smooth blend between lilac and lavender lights has a calming effect on the nervous flier in me.  The Vistara Premium Economy is a balance between the Economy class and the Business class, but the premium has a tinge of Business class with its ample legroom and well-padded seats.  As we prepare for take off, Bill Wither’s Ain’t No Sunshine comes on, and plays for the duration of the take off and the journey. The playlist extends to other popular tracks from the ’60s, a selection of music I’ve never really heard on flights before. 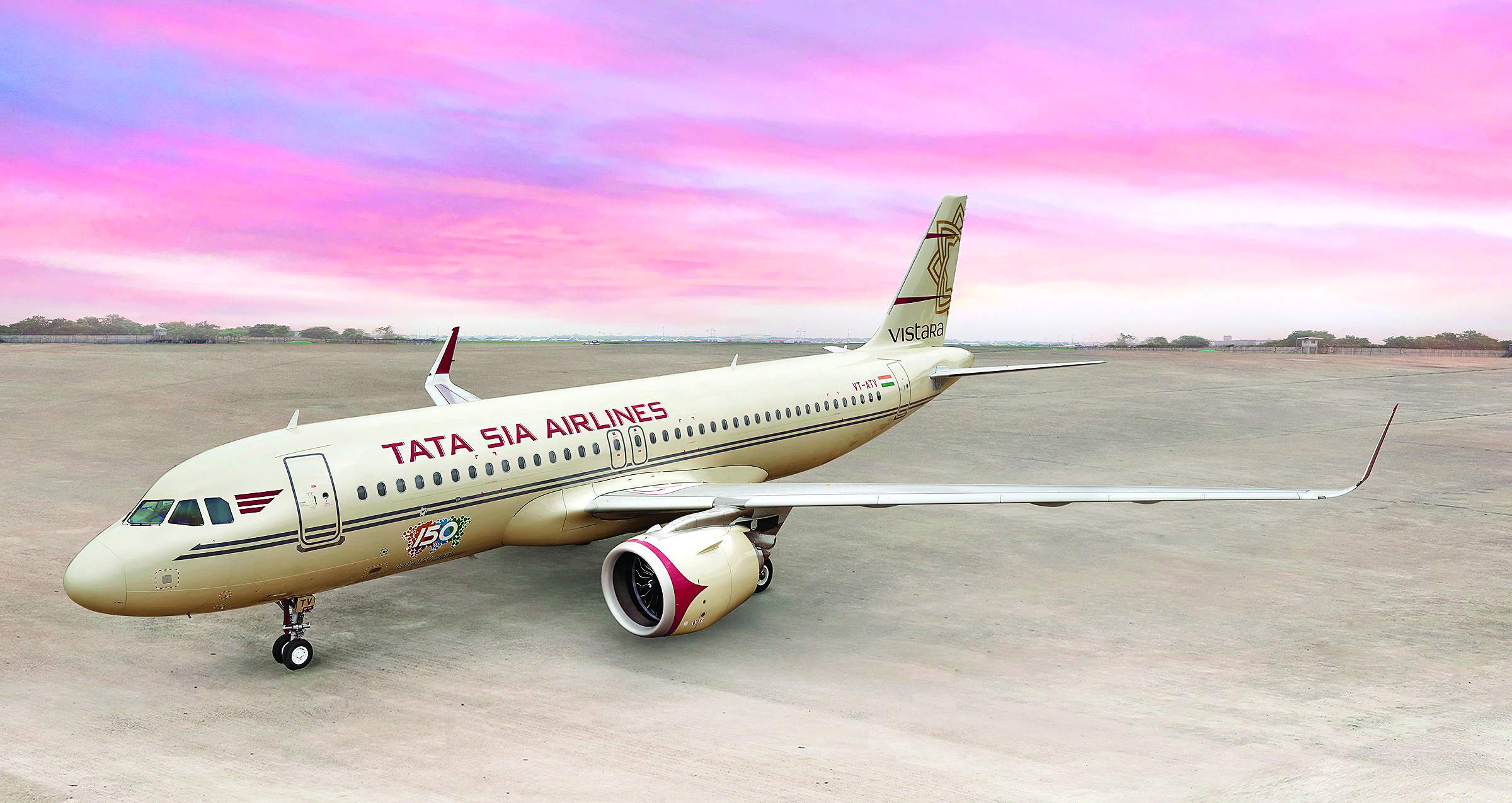 Playing favourites
The take off is a tad turbulent but soon enough, we pass the stormy skies and are in a spot of sunlight. The air hostess takes this as the perfect cue to roll out the meals. The menu is a selection of JRD Tata’s favourite dishes — cheddar cheese and onion omelette, crêpe au champignon, Waldorf salad, minestrone soup, herb roasted chicken, a Goan prawn curry and a creme caramel. This French touch to the menu seemed fitting, considering JRD Tata was born in France, and spent many years living there. The menu was specially curated from the TAJSats kitchens with Mumbai-based Chef Rajeev Bansal at the helm, who has been creating meals for Vistara for a very long time. We got to chat with him for a small interview while on-board and he says,  “JRD was extremely reserved as a person, so only a few people knew what he wanted to eat and how he would want to eat. We’ve tried our best to recreate some of his favourite meals as per historical records at Tata Sons and Taj from the TAJSats kitchen.” For breakfast, you can choose between a masala omelette served with a chicken cheese croquette and ratatouille, matar paneer bhurji and a molaga podi upma. You can also get a steaming cuppa of Starbucks India’s estate blend for flights above 90 minutes. For mains, there’s stuffed chicken with roast potatoes, a dum aloo and a fudge brownie. 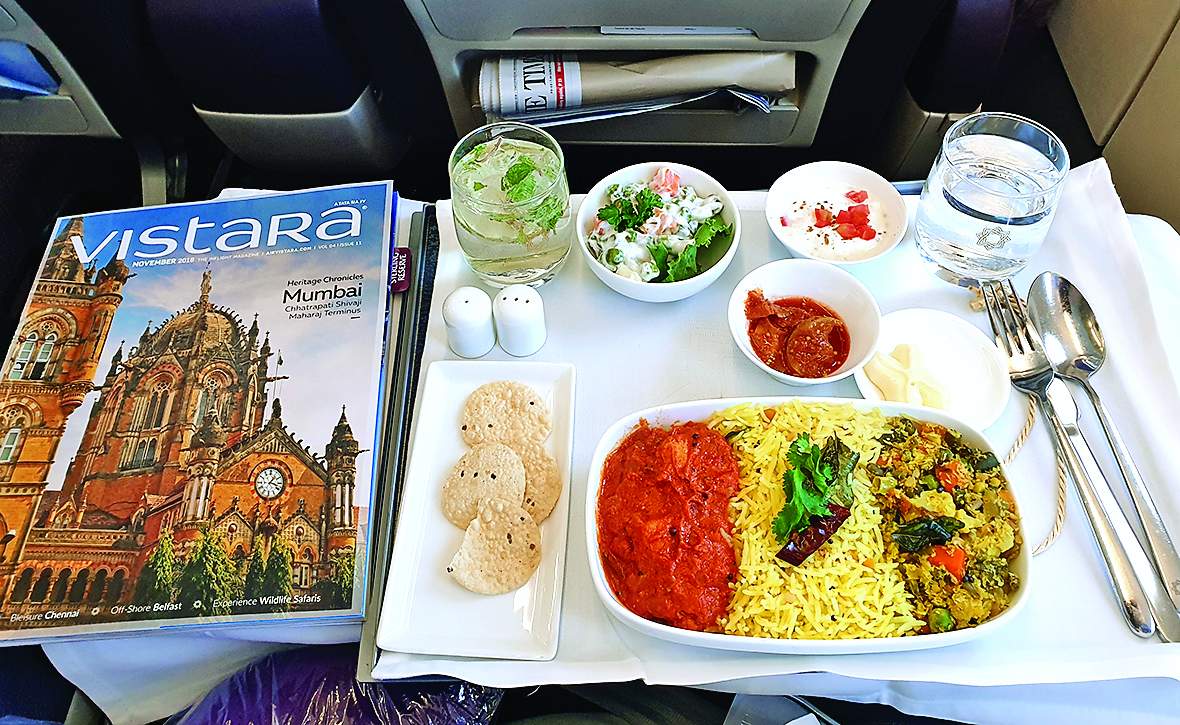 Tracing the legacy
An hour and a half later, we descend in sunny Goa. Surprisingly, I didn’t have to change flights and stayed back while the aircraft prepared for the return journey to Delhi. It was on this return trip that I caught up for a quick Q&A (I didn’t think I’d be doing this 45,000 feet in the air) with Sanjiv Kapoor, the Chief Strategy and Commercial Officer of Vistara. “We wanted to announce to the world that we are the true heritage of JRD Tata’s aviation legacy, and that we are carrying the baton forward,” explains Sanjiv.

Monochrome memories
An interesting thing Sanjiv and his team did was going through black and white photos of the flight from back then, to trace what it would’ve actually looked like. “Truth be told, there weren’t many pictures, and we tried to put the pieces together,” says Sanjiv. Since there were no colour photos, they decided to use their imagination and go for a pearlescent paint for the retro look. The uniforms were a surprise, he says, and was under wraps until the launch. “Again, we didn’t have any colour images so we came up with a uniform that harks back to the golden age of flying which is the ’50s and the ’60s,” says Sanjiv, who previously worked as Chief Operating Officer in Spicejet. 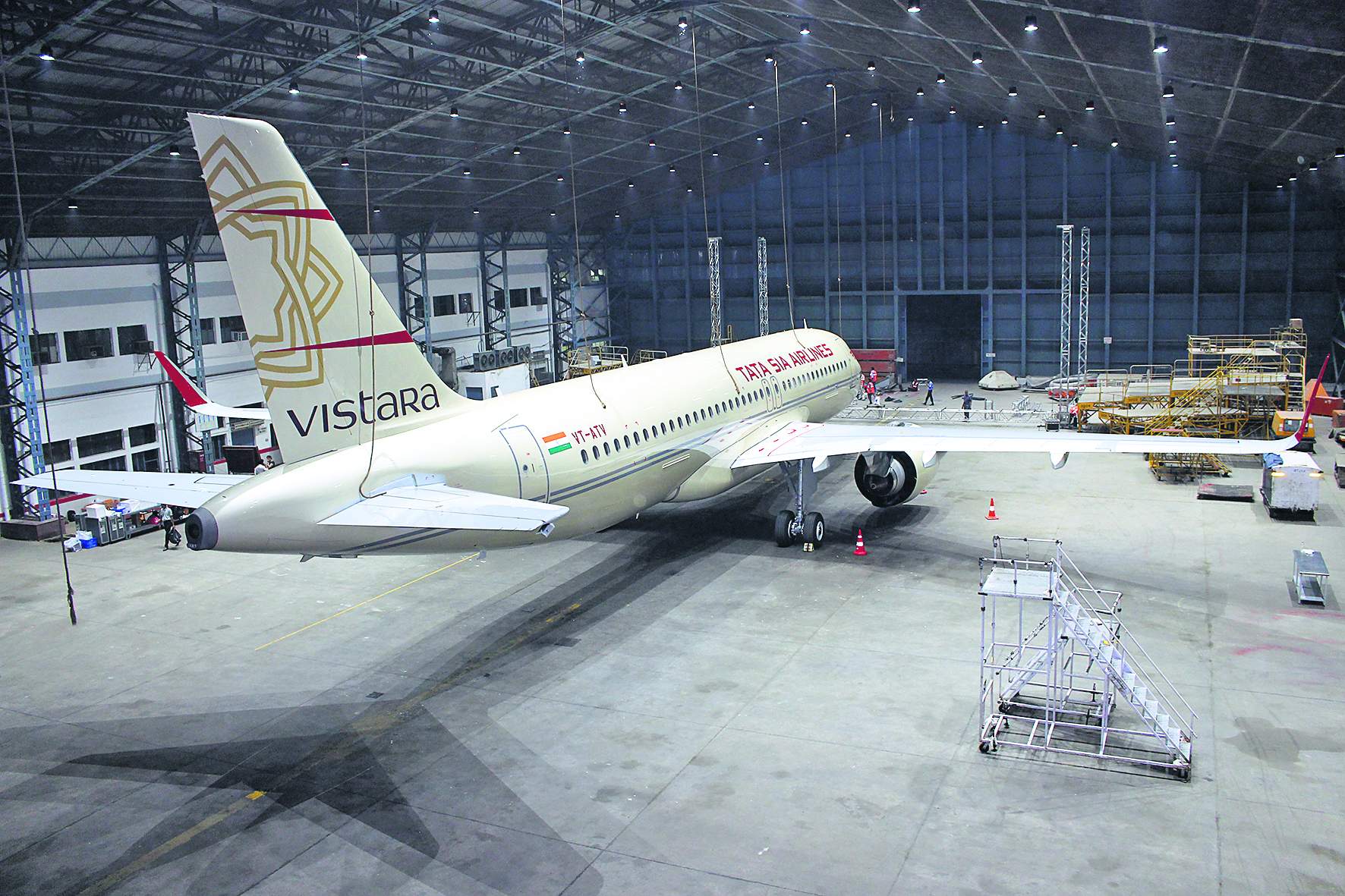 “We looked at the ’60s fashion and realised that Jackie Kennedy was a huge inspiration for us. We gave the samples to our uniform designers —  Lecoanet Hemant and they came out with this soothing, pastel design.”
As we prepared for descend in Delhi, and Sinatra crooned What a Wonderful World,  I slowly felt my travel anxiety ebbing away. It was truly the first time I hadn’t fiercely jotted down my worries in a piece of paper as was the case whenever I flew, or experienced some sort of turbulence. Vistara’s Retrojet, I’d say is not only a class apart, but they sure have a way of making you feel right at home.

The next flight will commence on JRD Tata’s birthday on July 26.
The writer was invited onboard by Vistara Airlines.