Team India qualified for the 2019 Cricket World Cup semi-finals after they defeated Bangladesh by 28 runs at Edgbaston on Tuesday. One of the highlights of the game, however, was a special fan named Charulata Patel who came to cheer for Team India. The 87-year-old became an instant favourite amongst not only the fans and commentators but also the Indian team, as she was spotted celebrating all the boundaries and the wickets in the stands.

After the match, Indian captain Virat Kohli went over to spend some time with her. Kohli took to Twitter to share some moments with her and wrote, “Also would like to thank all our fans for all the love & support & especially Charulata Patel ji. She's 87 and probably one of the most passionate & dedicated fans I've ever seen. Age is just a number, passion takes you leaps & bounds. With her blessings, on to the next one..” Man of the match Rohit Sharma also went and met Charulata to get her blessings. 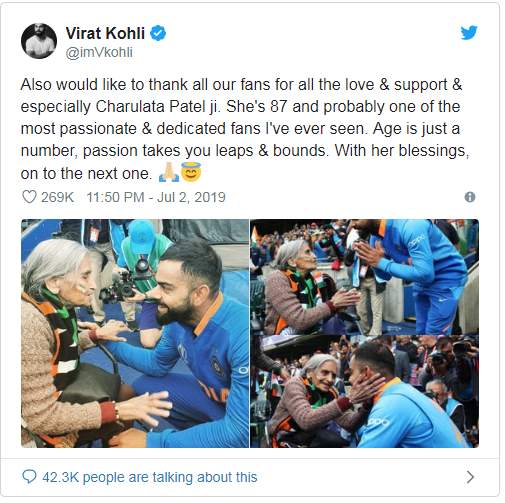 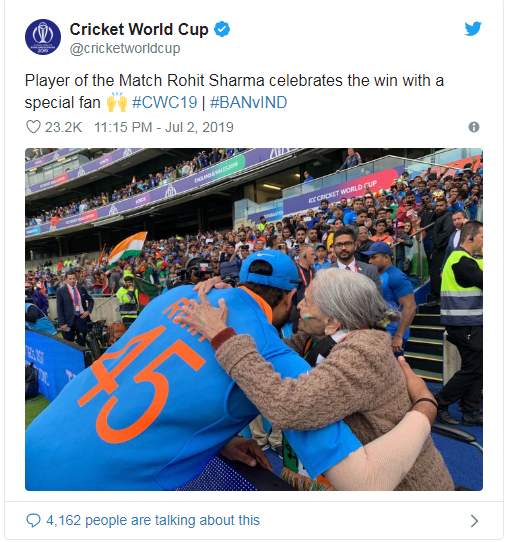 In an interaction with media, Charulata said, “Virat came to meet me after the match. He touched my feet and I gave him my blessings. I told him to keep up the good work and win the World Cup. I always pray for the Indian team’s success. From the bottom of my heart, I wish the Indian cricket team all the best.”

“Virat said he would look forward to see me in the rest of the 2-3 matches but I told him that I do not have the tickets, and then he said, ‘don’t worry about the tickets, I will give it to you’,” she added.

How amazing is this?!

India's top-order superstars @imVkohli and @ImRo45 each shared a special moment with one of the India fans at Edgbaston.#CWC19 | #BANvIND pic.twitter.com/3EjpQBdXnX