#Pray_for_Neasamani: All you need to know about the viral hashtag that is taking the country by storm

A little over 24 hours ago, a seemingly confusing hashtag #Pray_for_Neasamani began trending on Twitter. Everyone from politicians to popular brands was praying for this person called Nesamani. But who is Nesamani and why are people praying for his well-being?

Who is Nesamani?
Nesamani, for the uninitiated, is a popular character (dare we say pop culture icon now) that Vadivelu plays, in the Tamil movie Friends that also stars actors Suriya and Vijay. Nesamani, in the 2001 film is a contractor, who is hurt after one of his assistants accidentally drops a hammer on his head, while Vijay and Suriya look on, poker-faced. The comedy is slapstick and Vadivelu is undoubtedly a comedic genius (not to forget, his dialogues provide enough fodder for meme-makers) which perhaps explains why the scene is still remembered today, 17 years later.

Why is the hashtag #Pray_for_Neasamani trending?
It all began when a meme page called Civil Engineering Learners posted a picture of a hammer and posed the question "What is this tool called in your country?"
In response to the question, an over-enthusiastic Vadivelu fan, replied, "This is what we call Suthiyal. It will give 'tung tung' sound we blow with it on something. Painting contractor Nesamani's head was broken in Jamin palace with this one by his niece. Paavam." (sic).
Another user, who made the connection between the hammer and the Vadivelu film, jokingly asked. "Is he OK now?" 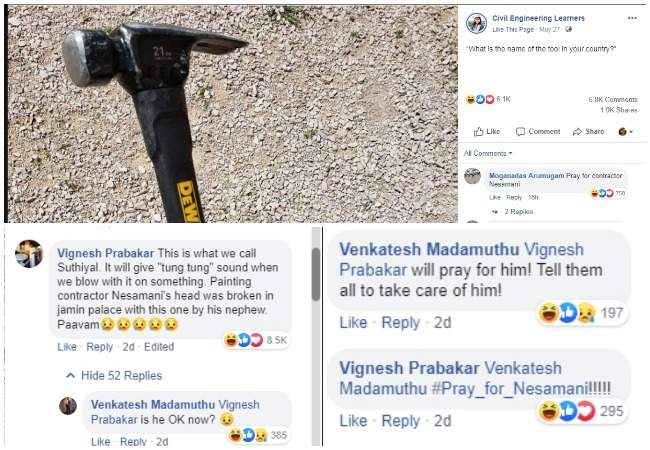 Between the two of them, the hashtag #Pray_for_Neasamani originated, and soon enough, it was one of the top trends in the world, with everyone from meme makers and Twitter users to journalists, politicians and even popular brands riding the wave.

Here are some of the best reactions on Twitter:

There were even fake press releases about his health circulating online! We so wish Krishnamurthy was as professionally trained as our PRO Store painters to have avoided causing this injury.

We leave you with a clip of the iconic scene: