Dr Sunil Suhas Solomon on how his work and ethos are based on his mother, Padma Shri Dr Suniti Solomon’s powerful legacy

In 1986, SHE documented the first cases of HIV infection in India. However, Dr Suniti Solomon’s legacy goes beyond creating medical history. Celebrating her 80th birth anniversary earlier this week, the YRG Care Medical Centre: Suniti Solomon Outpatient Service Centre in Chennai was officially dedicated and launched, where we heard heartwarming stories of her compassion, her fighting spirit and her good humour. Stories that changed lives. Stories about lives improved, saved and even made.

In fact, the award-winning docu-film, Lovesick (2017) features Suniti and her work with matchmaking HIV positive individuals. We catch up with her son, Dr Sunil Suhas Solomon, Chairman of the YR Gaitonde Medical, Educational and Research Foundation, to celebrate his mother’s life of selfless community service that serves as an inspiration for many till date. In 1993, Suniti established the YR Gaitonde Centre for AIDS Research and Education (YRGCARE) and since then the non-profit organisation has come a long way. We now turn the spotlight on Sunil who has taken that torch forward with his own share of trailblazing community service. 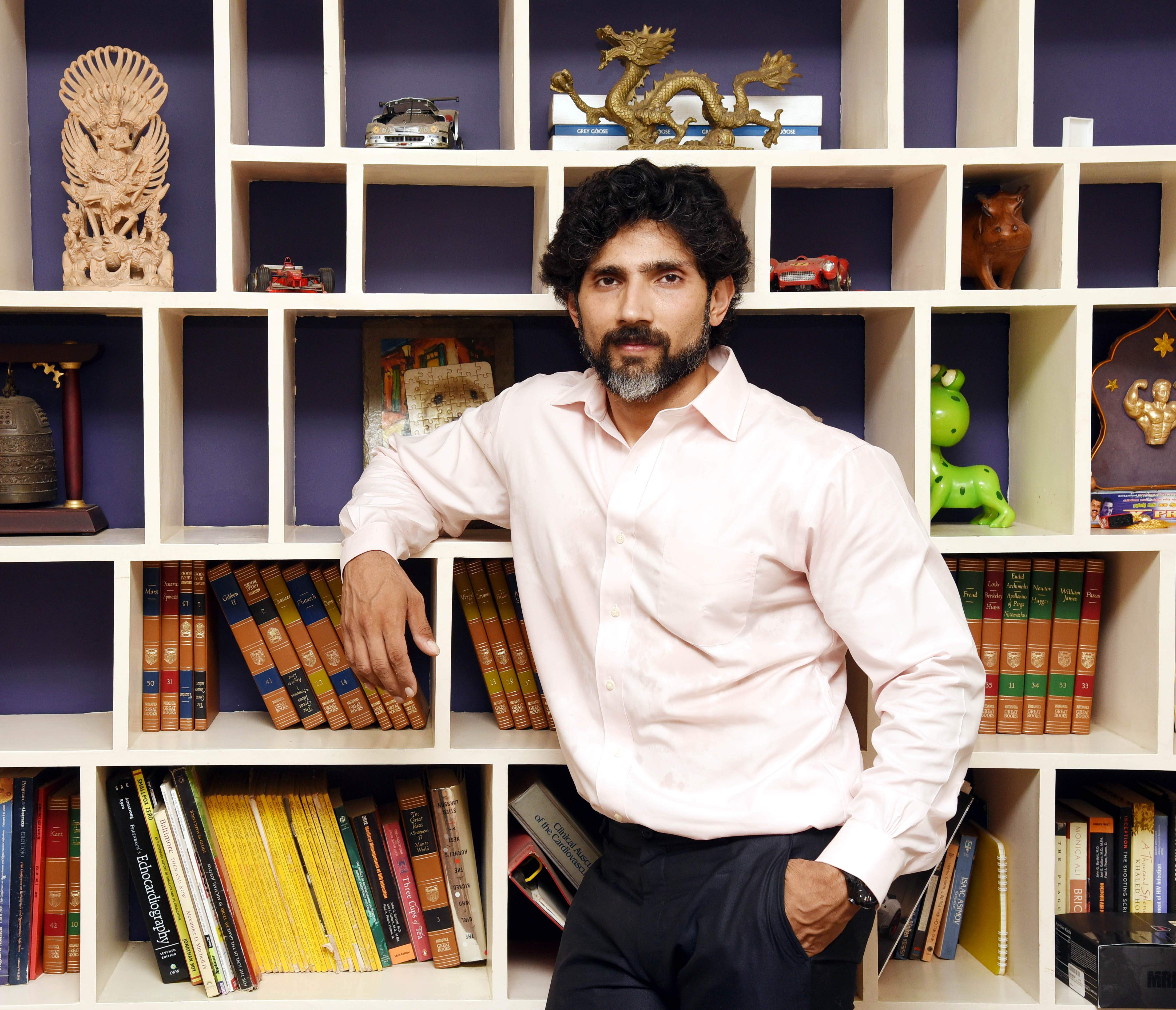 From the heart
Chatting with him at his residence in Anna Nagar, Sunil tells us how his house represents the anatomy of a human heart! It was his father’s idea. The well-known cardiologist had designed this curious house that seems asymmetrical, with a spiral staircase that leads into the chambers that ‘represented the heart and were filled with people you love’. Professor Solomon Victor was not just an expert cardiac surgeon, but he was also an evolutionary biologist, a serious authority on plants, a philosopher and most importantly a humanitarian. In fact, when Sunil wanted to pursue surgery, it was his dad who dissuaded him. “He said ‘surgery is way too downstream — most people, especially poor people, before they get to the stage they need surgery, they are not able to afford it. But if you could diagnose them early and treat and control it, you could prevent a lot of them from needing surgery.’ Those words really struck me!”

Unfortunately, Sunil lost his father early in life — right around the time when he was going to appear for his entrance exam for his Phd in Johns Hopkins University in 2006. He wrote the exam after a couple of months and managed to clear it, and get the scholarship too. “I scraped through with 75.3 per cent. The cut off was 75. Sometimes in life that’s all it takes — you just have to scrape through.” Sunil attributes the qualities of patience and perseverance to his father to ‘never give up’.

In his own shoes
However, life didn’t get easier for Sunil. It is about four years now since he lost his mother to cancer at the age of 76. It was a debilitating personal loss for him. “I miss her particularly at home, and I really miss her counsel.” Suniti has often been called a one-woman-army against the HIV epidemic in India, and to forge ahead without her made it a more daunting task. How does one keep up with a Padma Shri awardee, whose achievements were legendary and ran into reams of accolades? We ask Sunil how he coped with the challenges of following in his mother’s footsteps. He avers, “I learned quickly that you can never be someone else. Each person is unique and so, no point trying to fill someone else’s shoes. You have your own shoes with which you create your own path that others will hopefully follow.” And create his own path he did! In 2015, he was one of the first recipients of the Avenir award, a Director’s Award from the National Institutes of Health, USA aimed at acknowledging individuals who propose high-impact research and who show promise of being future leaders in the field of drug abuse and HIV. In fact, Sunil scored a perfect 10, which is definitely worth writing home about, we are told. Earlier this year in April, he was awarded a $20 million grant from USAID to implement and study innovative models of service delivery, to improve the HIV care in India. 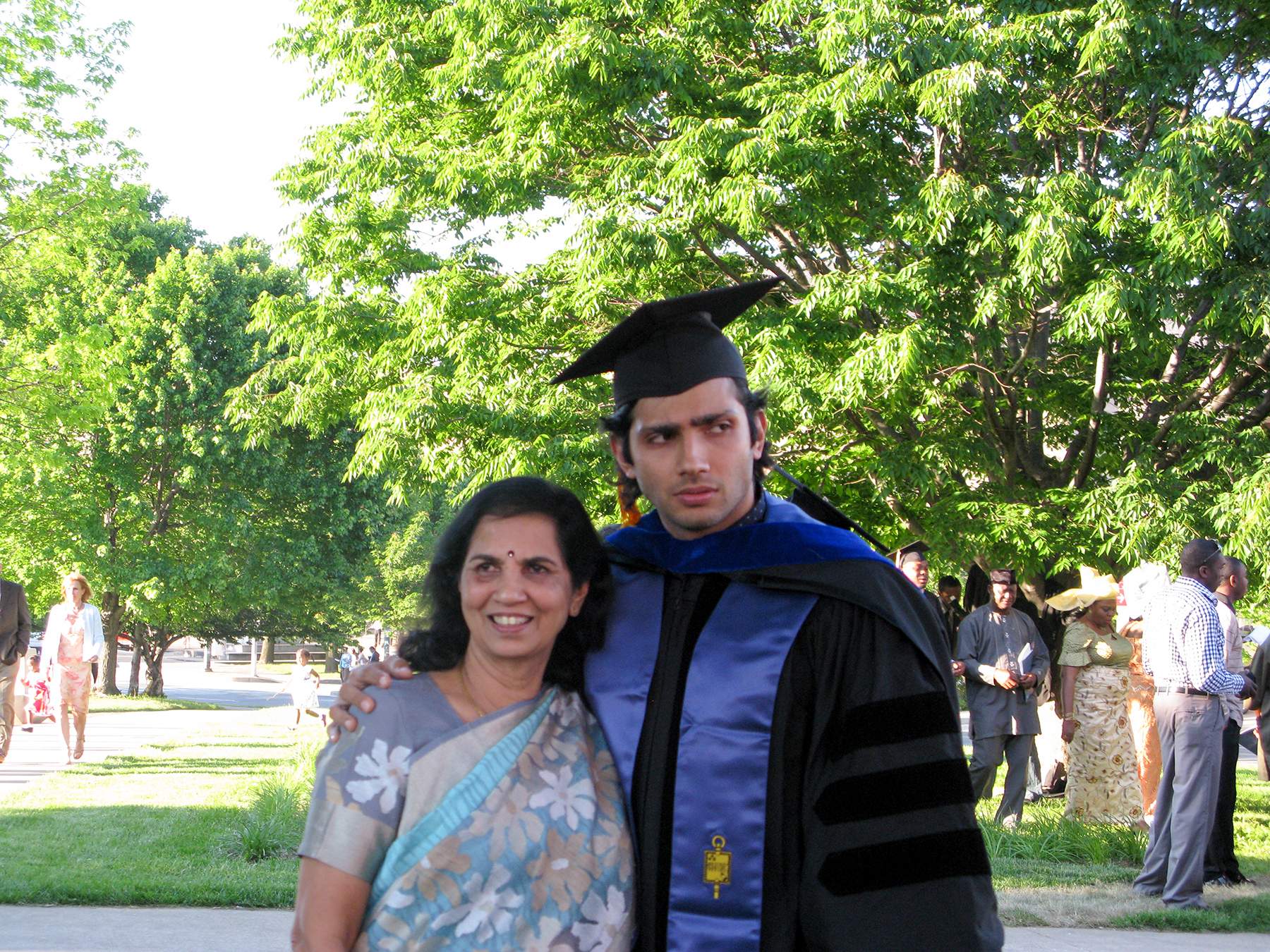 Talking about the changes in YRG CARE since his mother’s time, the Associate Professor of Medicine (Division of Infectious Diseases) at the Johns Hopkins University School of Medicine tells us that some primary principles of his family will never change. “We have always believed in a social service module that evolves according to the need of the community,” says Sunil, adding how they started with HIV education, then testing and treatment, and finally research that is uniquely relevant to Indian setting. “Meanwhile, I am also expanding a lot outside of Chennai — and now operate in almost 30 cities across India.”

In the city
The recently opened clinic is the answer to a larger vision of primary healthcare and preventive medicine, heralding a shift of focus from infectious diseases to non-communicable diseases. His parents’ motto, “Treat the individual as a whole and not an individual disease” is the foundation of patient care at YRG. Their laboratory is in the VHS campus, while their administrative block is in Chetpet. About their Eco-kitchen (2009) down ECR, Sunil says the motivation to start it harks back to the concept of ‘treating the individual’. While battling the HIV crisis, soon the problem of income for the disadvantaged widows surfaced. That’s when they came up with the idea of food carts — where these women got food at subsidised rates from the Eco-Kitchen, so they could sell them at a margin and be empowered. “The goal really is to improve health in the complete sense, which is physical, mental and social well-being of an individual.” 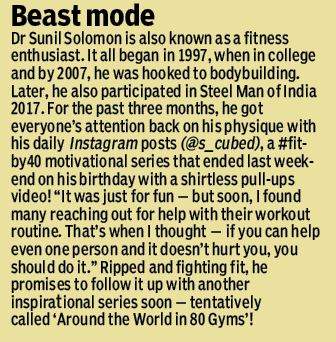 Pan-Indian miles
Shuttling between Baltimore and India, one can literally say that Sunil spends most of his time in airports across the world! With the inception of Accelerate (flagship project of  USAID India) which has the ambitious goal of ending the HIV epidemic in India, we ask him how he plans to cope with living out of a suitcase. He promptly assures us that the travel will reduce in the coming year. Having watched his mother at work, he tells us that he has learnt that for a team to move forward, one has to trust people and not micromanage. “I believe in delegating responsibilities, and then, have faith that the work will be done.” Accelerate has a presence in 10 high-HIV prevalent districts across India and hopes to reach 1,00,000 HIV vulnerable people and children in these areas. 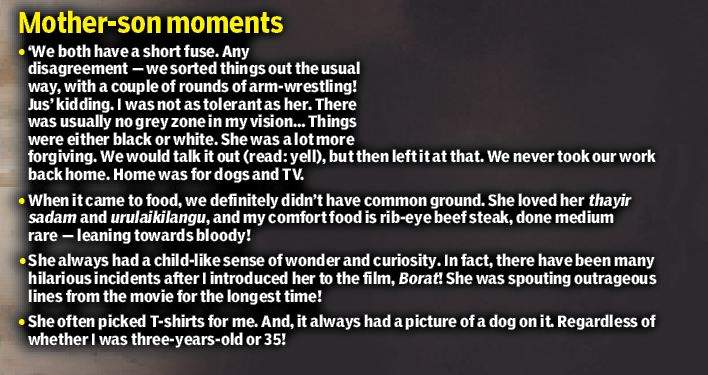 Paws for a cause
We ask Sunil if he hadn’t studied medicine, what would he have pursued? “A pilot or a race car driver. I am obsessed with speed!” he shares, even as we watch him roughhousing with his two furry companions. Suniti was also known as the doctor who would take to work her faithful four-legged therapist, Lara, her Golden Retriever (who would interact with the patients). We realise that the apple has not fallen far from the tree. In fact, when we ask him about his marital status, he quips cheerfully, “I am unmarried with two ‘kids’ and always ready for more” — the Game of Thrones fan is referring to his pets, Ghost and Dany (after the Mother of Dragons)!  Talking about being his parents' son, the alumnus of Sri Ramachandra Medical University tells us with a laugh that the challenges were more during his time in college. “Where everything you did would get back to your parents since most of your teachers were their students! So, it was sort of boring. If I missed class, they would know. If I did badly in an exam, they would know. There were no secrets!”