Creativity thrives on constraints. History has definitely proven that theory - with classics that have been written in the confines of prison and stunning artworks are born within various physical limitations. While a restriction of any kind is the last thing any artist expects in a creative project, these photographers have taken it as a challenge to prove otherwise.
Barring photojournalists who are on the frontline, documenting the pandemic and its effects in the world, homegrown shutterbugs collectively face the compulsive need to get their photo fix. And the way to tackle that, we discover, range from creating miniature at-home sets to doing photo shoots over video calls. At Indulge, we spoke to a bunch of these photographers who have gone out of their way to stay creative during this lockdown. 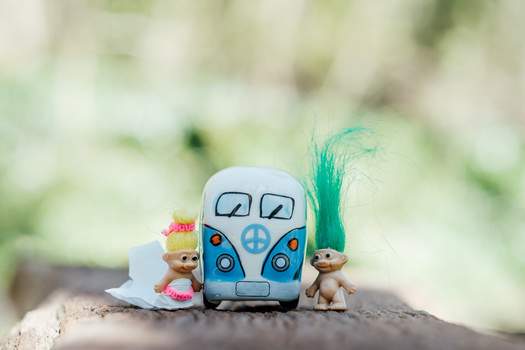 Lockdown or no lockdown, wedding photographer Anna Pumer from Brighton in England couldn't do without clicking those dreamy pictures of brides and grooms. And what if there are no real weddings? Anna went on to set up a wedding at her own home using her dolls and began clicking away some pics that are too cute to ignore.

"It was hard to stay creative, to begin with, especially when you see that people on social media are doing super cool things. I felt like I should be doing something too.  That's when I thought, I have got troll dolls and I am missing out on weddings, so I put the two together! The shoot has got such a great response - my future wedding clients have told me that it made them even happier that they booked me, as well as telling me how "on brand" it is - which I'm all about. It's jump-started my creativity again too - so score one for social pressure!," says Anna, who's the founder of Anna Pumer Photography and also runs a community called Kick Ass Photographers. 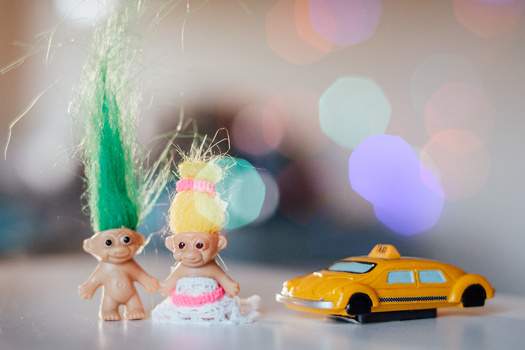 Talking of how the lockdown took a toll on her work, she adds, "I'm finding the lockdown quite similar to normal life! I'm used to working from home, and I am spending more time outdoors in nature than I usually would. But work-wise, I had 23 weddings booked for 2020, and the postponed weddings are moving to peak dates next year, so I've lost the opportunity to make new income next year, as well as lost everything this year. But I'm an entrepreneur, so I'm good at coming up with ways to earn money! My couples have been awesome and are paying part of their balance, and I do website reviews for photographers."

A similar trend was spotted with Ireland-based photographer Agnieszka Marsh who took social media by storm after she posted stunning engagement and wedding pictures of Barbie and Ken and Stacey Oliver, another UK-based photographer who put together and shot a super adorable lego wedding.

Portrait at your doors 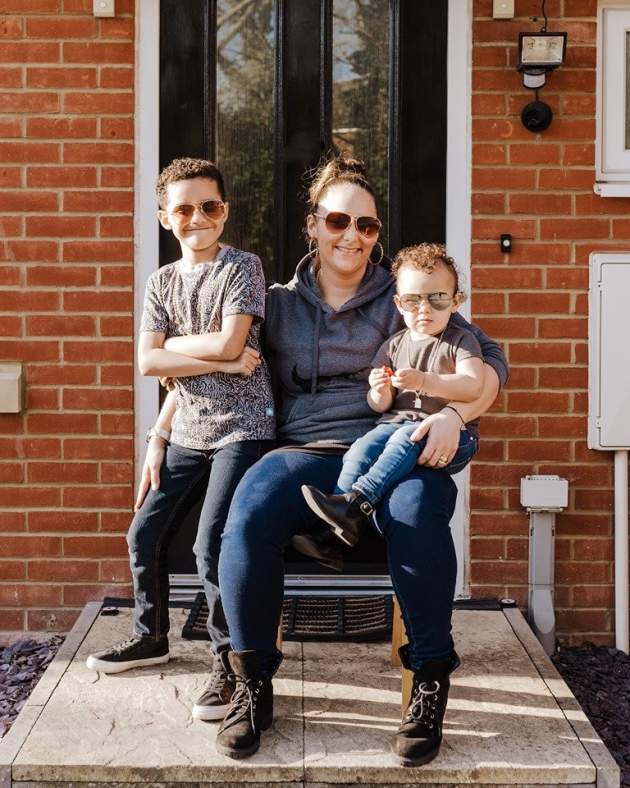 UK-based photographer and founder of Konjo Photography, Donna Reid decided to use technology to continue taking pictures of newborn babies. “The lockdown has been really difficult. Since I cannot go out for work, I have tried to find other ways around it. Like in the case of newborn photography, since I can’t bring them to my studio, I go on a live call with the parents and they take the photos as I guide them through the process. They then send the pics to me and I edit them,” shares the photographer who is based out of Suffolk.

Having specialised in maternity, newborn as well as family photoshoots, it is Donna’s lockdown project- doorstep portraits - that have garnered most attention online. “As a photographer, I'm a people person and I’m not enjoying the lockdown at all. I miss my clients, I miss the families, so it’s really tough. I saw this project trending in the US and I thought it was a cool idea. And these are times we want to document. So I started doing it in my locality.” Talking about her process, she says, “I have completed around 25 doorstep sessions. Have a couple more booked in. I do them during my daily walks so I'm well within the government guidelines. I plan my walk around where these people live. I tap on their door, stand back, and let them come out. Then we take a few photos. It usually takes about five minutes.” Currently working on a short film for a children’s school, Donna adds that she also plans to start an online business as a photography coach for women.

FaceTime for the win 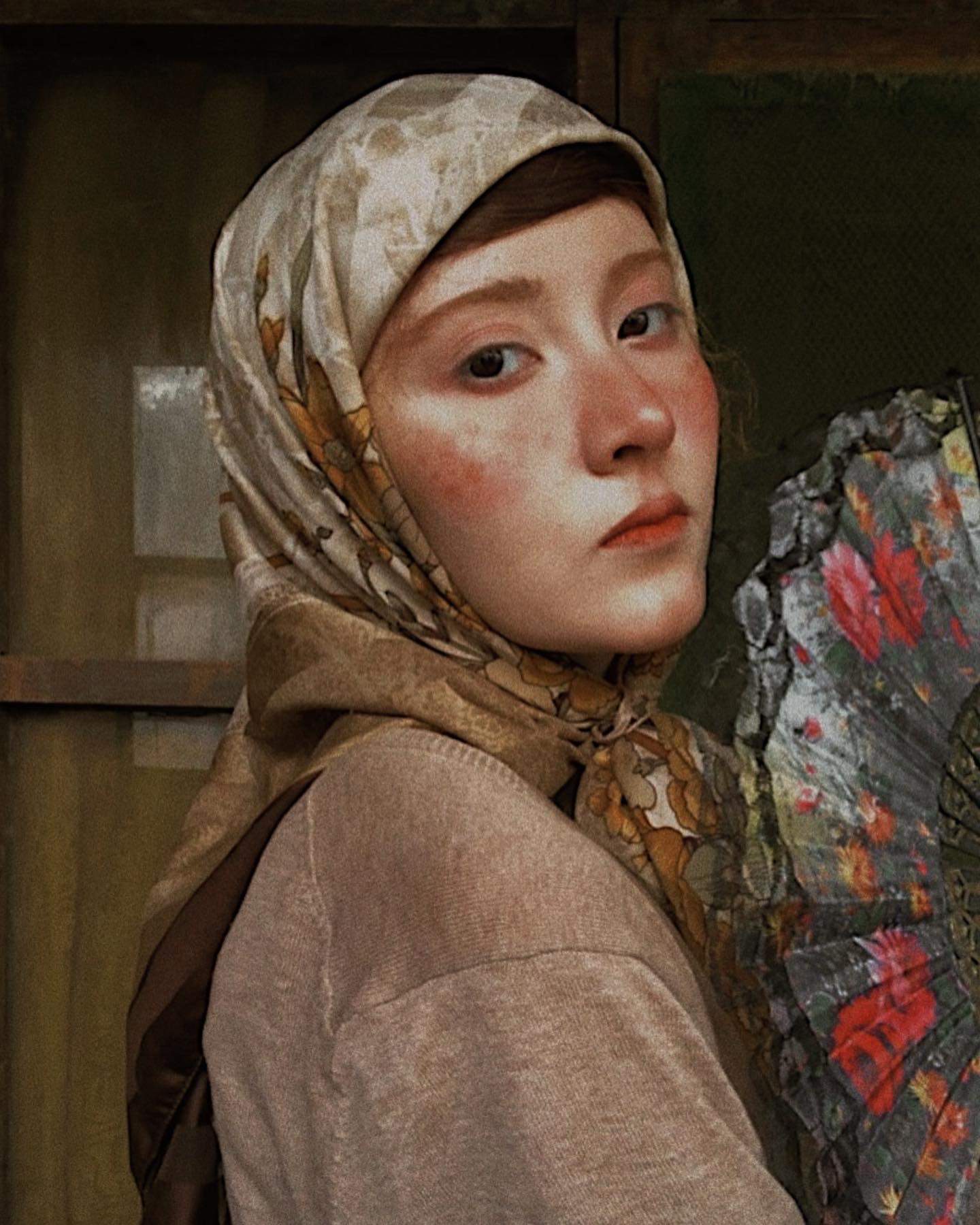 Being unable to travel hasn't stopped fashion photographer Vasanth Kumar from doing photoshoots with models across the world. Sitting at his home in India,  he has taken pictures of actors and models from not just across India, but also from Russia, Spain, France, and Egypt. "Being someone whose work demands travel almost all the time, it was a bit of a struggle staying in one place for a long period. But it does push you to find more innovative ways to create art and work from the confines of your home," says the Chennai photographer who has done over 20 photoshoots.

"I got the idea of shooting remotely from an Italian photographer named Alessio Albi. He was doing his shoots over a webcam and I improvised on that, as FaceTime had better clarity and made the shoots more straightforward. That provided a new platform for me to create art globally without any boundaries whilst leaving a minimal amount of carbon footprint. With a pandemic happening and people being stuck in their houses, this was one such approach where artists all over the world could connect and create art while being quarantined." Talking of his process, Vasanth says, "I start by taking a virtual tour of the space. I check the settings that are available at the same time keeping in mind the colours, shapes, and textures that I could work with. It proved to be quite a hassle when it came to the communication part because of the language barrier. I used google translator to type out the message and played the audio to them. It worked fine after a few tries." Having scheduled multiple shoots with various celebrities now, Vasanth says each shoot will come with its kind of mood and theme depending on the person and the place. 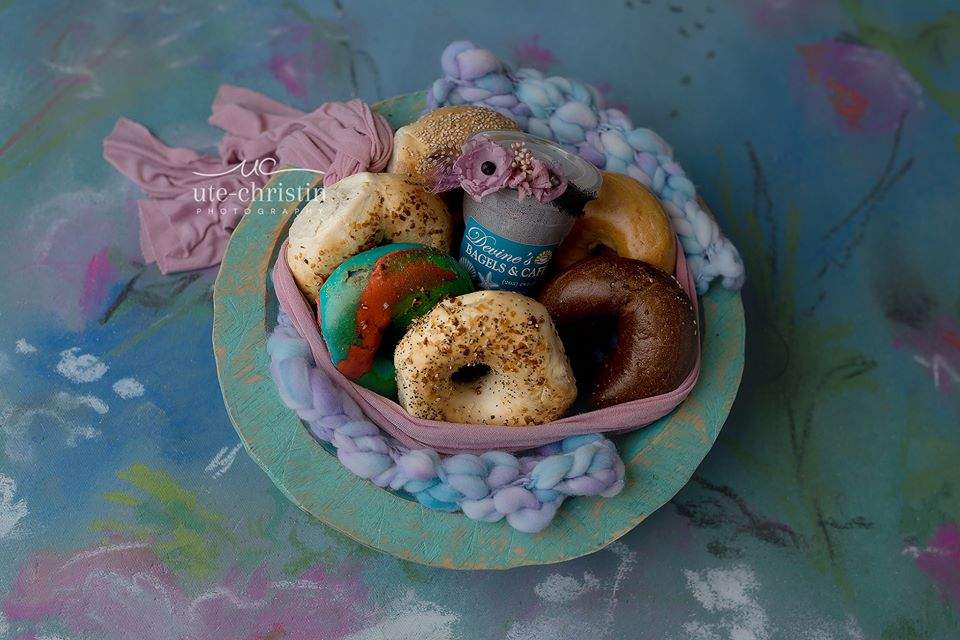 Ute Christin, a newborn photographer based out of Connecticut went to grab takeout from a restaurant two weeks back and saw that everyone there was worried about the future of their restaurant. The number of people coming to the restaurant had significantly dropped and they asked her to spread the word that they are still in business. And since then she's been brainstorming for an idea to help get some attention to these local restaurants.

“I had this idea of ordering food items from some local places and dressing them up and posing them like newborns. I called my best friend Kylie and asked her if she was around for a project and I called 13 local places and ordered one of their signature items on the menu. Some delivered and some had curbside pickup so we split the orders into two and grabbed the items that weren't delivered. She left them out on the curb for me too. You know, to be safe!" shares Ute, who owns the company Ute-Christin Photography LLC. 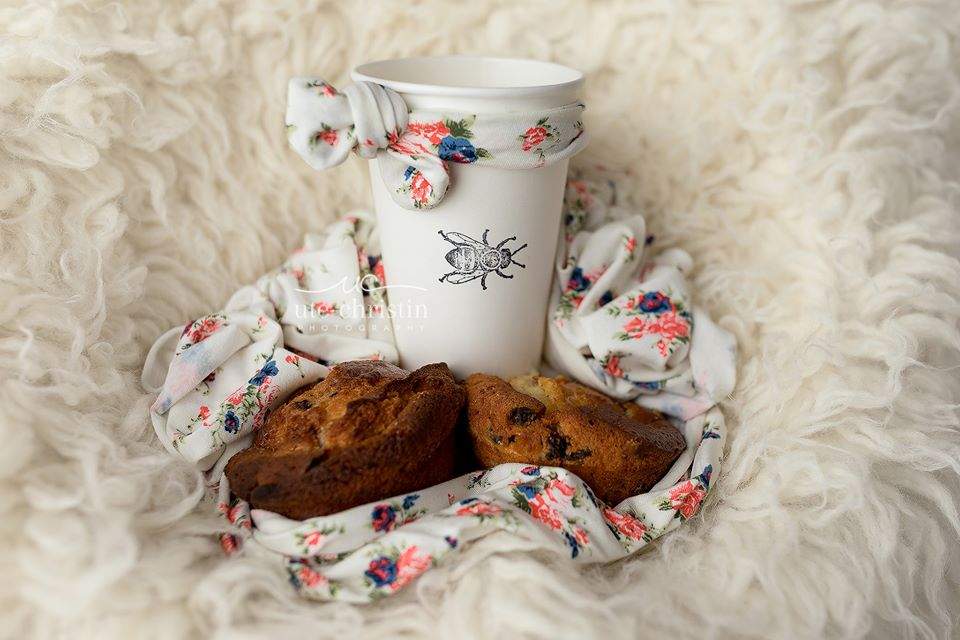 Talking further of her creation, she adds, “I took all the items in the studio, unwrapped them, and lined them up. Then I tried to get fun ideas for each of the items. I knew I wanted the hotdog swaddled up to give Pigs in a Blanket a new meaning as well as a bun in the oven. The chips had to go in a bowl because that is how you typically eat them. The grilled cheese gave me the hardest time but then I was like - the grilled cheese is already awesome on its own, so why mess with that. So I just added a crown. The other ideas came to me as I was going along.”

In Kolkata too though the lockdown has grounded most of the photographers, it couldn't mar or dampen their spirit. And city lensman Debarshi Sarkar is a prime example. Under virtual house arrest, this part-time poet, with many a published book under his sleeve, converted one of his poems into a brilliant series of pictures by simply capturing various elements and corners of his home studio. "I tried to play around with my camera and do something very different and experimental while under lockdown. Breathing life into the stanzas written by me within the confinement of the four walls was challenging but satisfying at the same time," tells the shutterbug, who's renowned for his work around light and shadow. 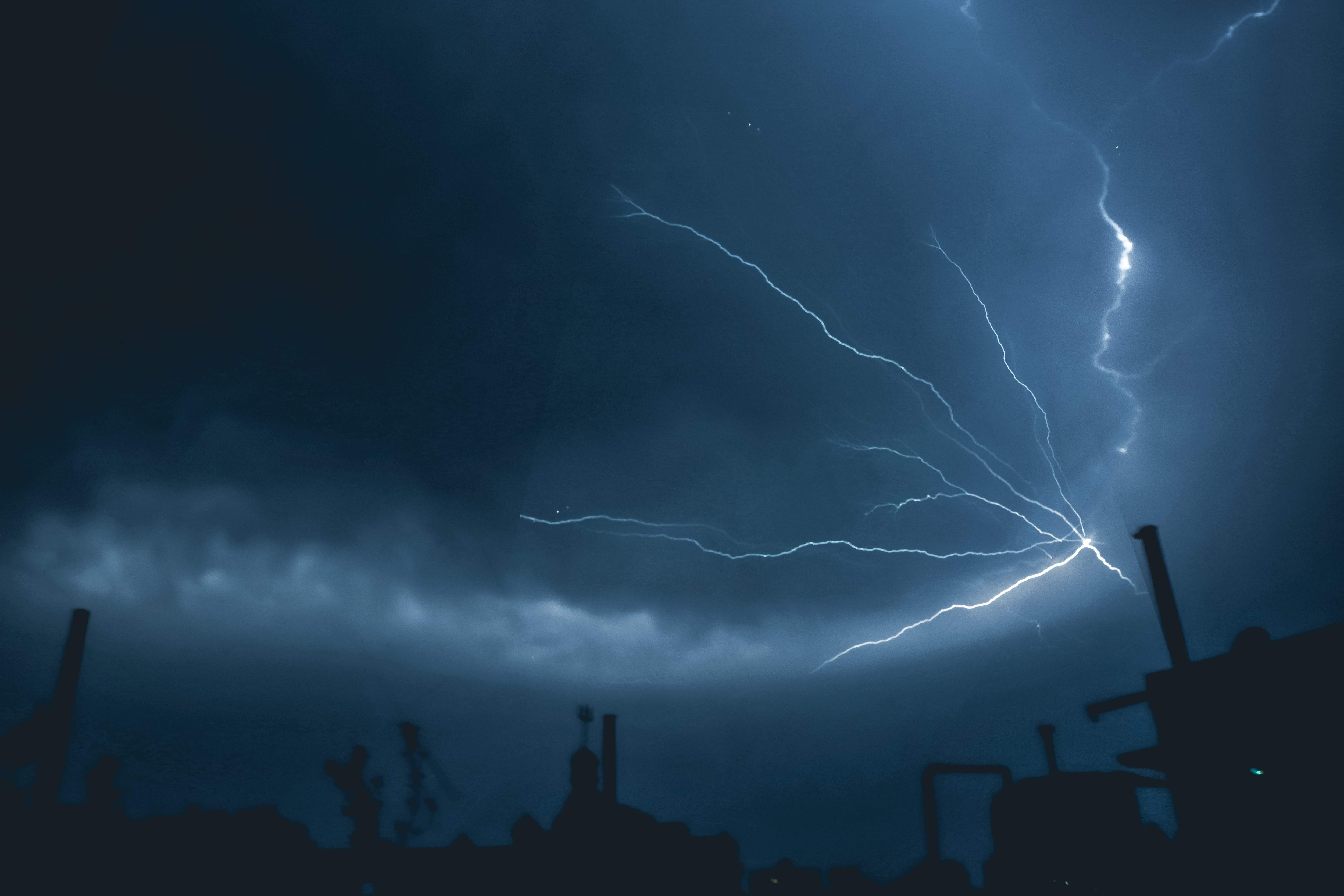 Photographer Meghdeep Sen too has utilised his time making a nearly two minutes video of a day during the lockdown and has taken various pictures of lightning with Kolkata experiencing frequent and unusual thunderstorms lately.