BTS speaks about hate crimes against Asians in an emotional post, shares personal experiences with racism

Popular boy band BTS has spoken up about the recent surge in hate crimes against Asians and said they will stand together in condemning racial discrimination and violence.

The band issued a statement on Tuesday about the spike in crimes against the Asian community. 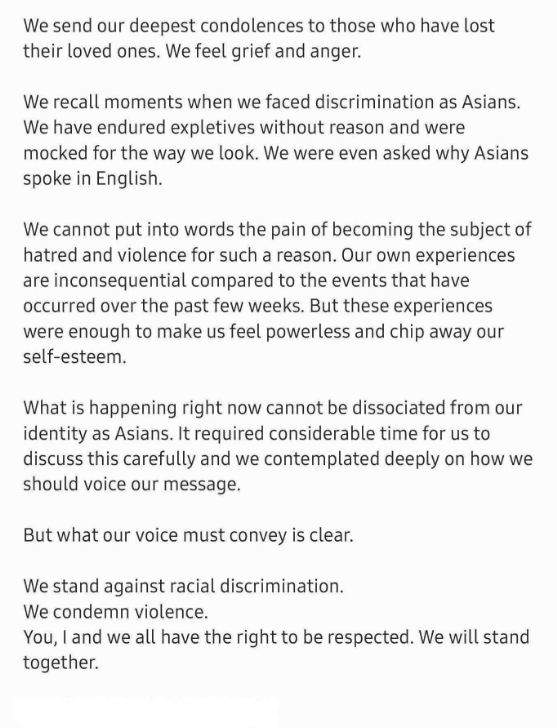 They also shared their own experiences with racism. “We recall moments when we faced discrimination as Asians. We have endured expletives without reason and were mocked for the way we look. We were even asked why Asians spoke in English.”

“We cannot put into words the pain of becoming the subject of hatred and violence for such a reason. Our own experiences are inconsequential compared to the events that have occurred over the past few weeks,” they asserted.

They added that the band’s “own experiences are inconsequential” compared to recent events but that the racism was “enough to make them feel powerless and chip away our self-esteem.”

“What is happening right now cannot be dissociated from our identity as Asians. It required considerable time for us to discuss this carefully and we contemplated deeply on how we should voice our message,” they added.

The band concluded by saying, “We stand against racial discrimination. We condemn violence. You, I and we all have the right to be respected.”

In recent weeks, the US has seen an increase in violence against Asians. On March 25, a Vietnamese man who had gone for a walk in Chicago was punched on the head from behind.

On March 17, eight people were killed in three Asian-owned spas, out of which six women were Asian. Media reports also said hate crimes against Asian-Americans rose by 149 per cent between 2019 and 2021.

The surge was also speculated to be connected to former President Donald Trump calling the coronavirus the “China virus”.