Here's how you can get the most coveted seat to behold the Dasara procession live in Mysuru, this Vijayadasami

Is July too early to make plans for the Dasara vacation in October? Not if you want a room with a view. A view of the spectacular procession of Goddess Chamundeshwari in a golden howdah atop a decorated elephant in Mysuru, the hot seat for the 10-day festival of grandeur. Bookings at Grand Mercure, Mysuru, an Accor Hotel, I am told, starts getting filled almost 100 days ahead of the Navratri. This year, Dasara falls on October 8.

Trail time
Mysuru makes its presence felt right in Bengaluru, at the Kemegowda International Airport, 145 km away with the aroma of ghee from the famed sweet, Mysore pak, enticing your olfactory nerves as you collect your suitcase from the baggage claim. As I start my four-hour road trip to my destination — Hotel Grand Mercure, I am already distracted by the stores lining the Bengaluru streets that are offering the quintessential Mysore Silk saris and sandalwood elephants. At Mandya, half-way towards Mysuru, on the driver’s recommendation I try the Bidadi Bisibisi Thatte Idli, a local delicacy that is 10 times bigger than the regular idli and steamed in a plate – a delightful culinary introduction to the historic city, I must concede. 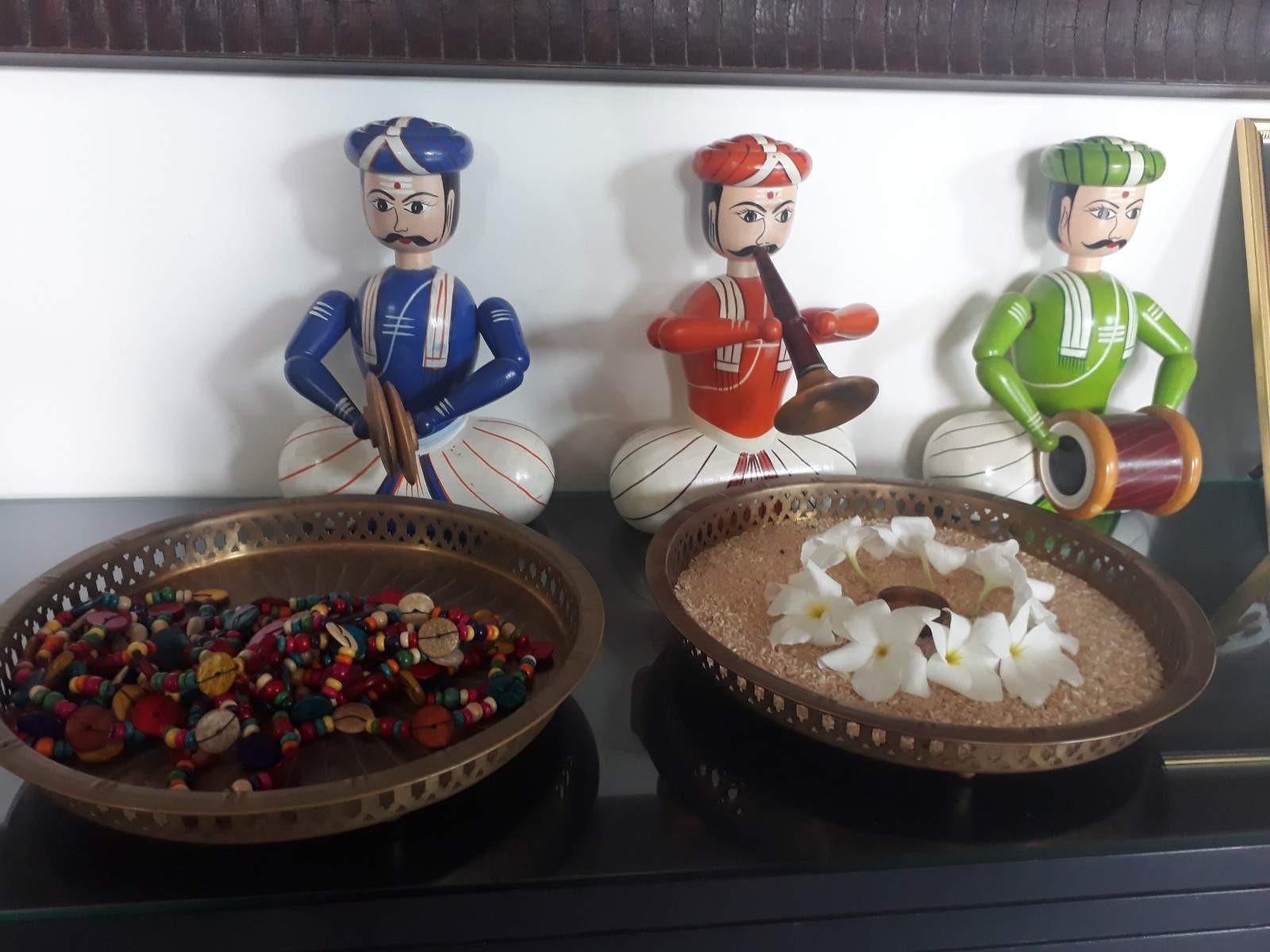 Nadaswaram notes
As I enter the hotel located on New Sayyaji Rao Road, barely an eight-minute drive from the city’s epicentre, I hear the festive notes of Nadaswaram in the hotel premises. “Is there a wedding going on in your banquet hall today,” I enquire and I am told it is the hotel’s way of welcoming its guests. “When you are in the Palace City, every day’s got to be a banquet. Mysuru is all about celebrating life. Which city in the world celebrates a ten-day festival better than us,” quips Yogeshwar Prasad Bhatt, Operation Manager, who gives me a hotel tour.

French connection
I settle for a tumbler of filter coffee, but I am stumped to see that the 24-hour all-day diner’s name is La Uppu. “La Uppu is a mix of the French word for The and uppu (salt in Kannada) which stems from the Mysuru food tradition where salt is the first ingredient to be served during a meal, thus emphasizing on the culture and traditions associated with the South. Of course, the ‘La’ is because the hotel group Accor has a French connection,” he explains. But that’s not where the connection ends. It’s not just in this 138-seater coffee shop, but the entire hotel has glimpses of Le France. There are ornate French chandeliers in the lobby and in the banquet interspersed with very Mysuru motifs such as the Ghandabherunda bird, the twin-birds emblem of the Wadiyars who ruled the city for centuries. Clearly, glocal is the mantra here.

Room ruminations
I am never the kind who believes in staying in a room with a view. For me, the sit-out or balcony is just a little nook to do a quick selfie because the light seems right. However, my room in Grand Mercure, I am told, is among the most in-demand ones as it gives one a panoramic view of the famed Dasara procession. When I pull the wicker chair towards the latticed parapet wall and face the road, I know why this is a coveted space. It is from here that you can watch and train your lens to witness the world-famous Dasara procession. I can already imagine myself doing a social media live broadcast for Indulge. 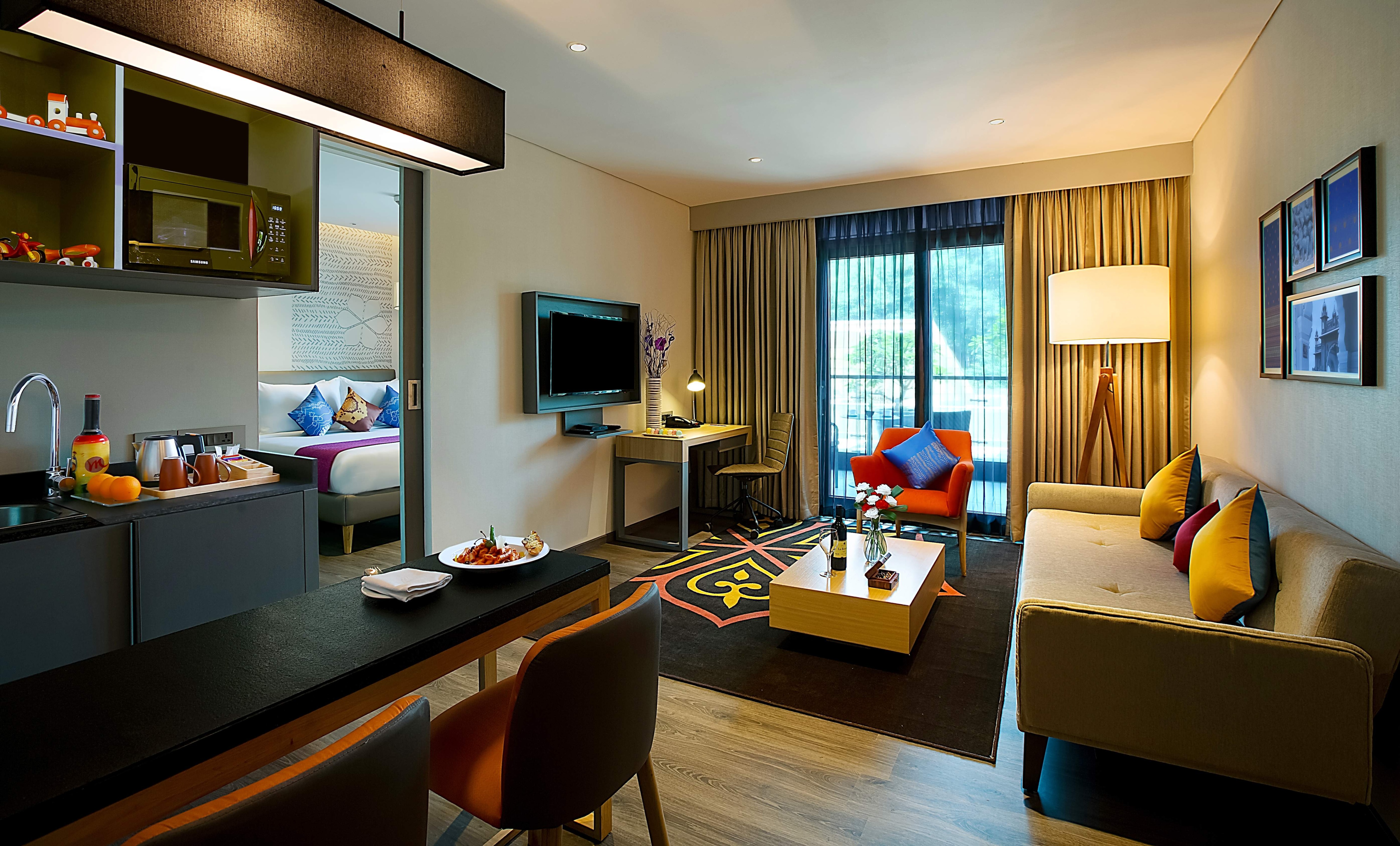 Upperstall view
“The hotel also sets up a viewing gallery on the sixth floor that overlooks the Dasara processional pathway, giving guests the opportunity to enjoy an exclusive view of the magnificent festivities the city is globally renowned for,” the manager informs. Incidentally, the facade of the hotel replicates a fortress with pillars on four corners and vantage points in all the corners. “However, my favourite scene is watching the jumbos do a practice walk early mornings for over a month to gear up for the D-day,” he adds. The inside talk is that these rooms are a hit with travel journalists who want to click that front-page banner picture that speaks of Dasara in India. Bookings to this 146-room hotel begin almost two months ahead for obvious reasons, I am told. Fun fact: The gym also faces the main road and obviously that space is for the fitness freaks, not the couch potatoes. 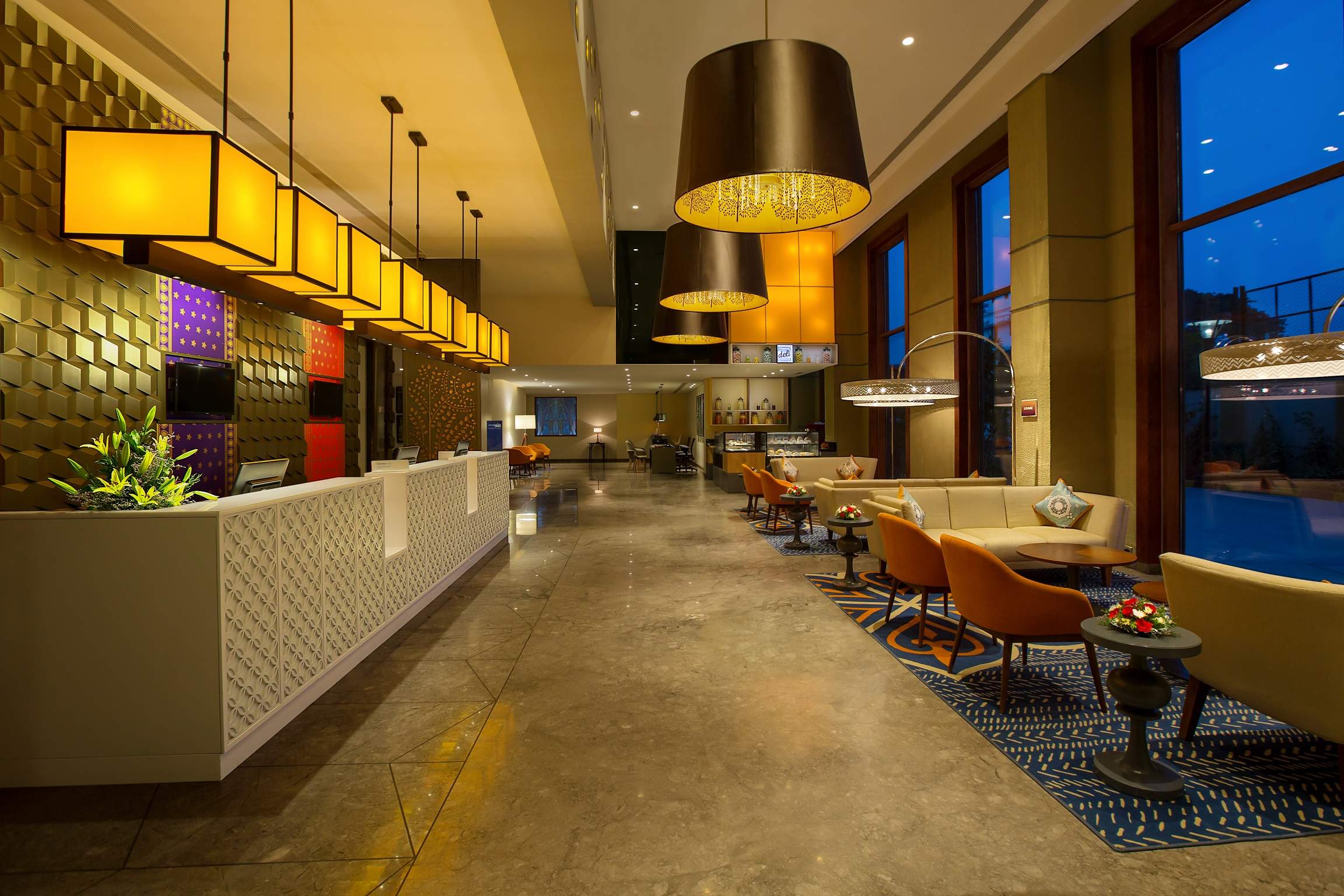 Going glocal
Considering the hotel attracts global guests, thanks to the appeal that the famed Mysuru Aramane (Mysore Palace) which boasts of Hindu, Mughal, Rajput and Gothic style of architecture and its three-story stone structure with marble domes, the hotel has an array of food options to appeal to all kinds of guests. Dinners are at By The Blue, the rooftop resto-bar that serves North Indian delicacies. “For the discerning guests, we offer a special menu handcrafted by the chef,”says Anirban De Munshi, Marketing and Communication Manager. My favourite one was the Kofta curry and the rose-petal laden kulfi. Mysuru enjoys a pleasant climate all through the year and dinner by the poolside under the stars is fascinating. Breakfast is a continental affair (barbeque grills, fish station, pasta station) with a good selection of local delicacies such as Mysuru Masala Dosa (a regular masala dosa with a secret onion-red chilli-coconut paste) and Maddur Vade, a savoury one that doubles up as breakfast and a snack. Lunch, of course, is a riot of Karnataka flavours. “The overseas guests are fascinated by dishes such as Bendekaya gojju (okra deep fried and soaked in a viscous and tangy gravy), akki rotti (an Indian bread made of rice flour), godhi payasa (wheat dessert) and of course the Mysore pak,” says Bhadru Bhukya, assistant restaurant manager. How come the piece of Mysore pak comes across like a passport to heaven and is vastly different from any other Mysore pak I have had in my entire life? “Our chef is also the one who makes it for the royal family here,” he informs. This little melt-in-the-mouth besan sweet was truly outstanding and nothing like what you buy as last-minute souvenirs at the airport. Grand Mercure’s Deli shop is a good place to stock up on a few boxes. Fun fact: It’s not the sugar-besan ratio, but the milk used for the ghee that makes or breaks the taste of this sweet treat.

Sights to behold
Grand Mercure is located strategically and is walkable from the palace. A drive to the Chamundi Hills with a visit to the Chamundershwari temple (about two hours including the drive up and down) on a Sunday before sunset followed by a visit to the illuminated palace is an interesting, not-be-missed weekend activity. The palace is lit up using 97,000 electric bulbs and it is a sight to behold. The Mysuru Zoo and Brindavan Gardens, the other two activities in the city, are equally fascinating and world-famous. Driver Pradeep, who has to drop me to the airport, tells me with great pride, “Medam, edee desadalli Mysuru nagara bhestu’. (Mysuru is the best town in the country). Ah well, any city that boasts of a palace, a river, a zoo, a silk fabric and a dessert is bound to be. Is it any wonder that the world’s queuing up in July and August to visit this city in October?

Starts Rs.3,499 per night.
(The writer was at Grand Mercure Mysuru on invitation by the AccorHotels).