Pamphlets bearing the Prime Minister’s images float on the river Ganga. Inches away from it, ash-smeared Naga Sadhus bedecked in marigold garlands take a dip. Moments before the naked ascetics dunk their dreadlocks into the green water again, volunteers standing atop a safety rail scoop up the flyers.

This simple act of cleanliness struck a resounding chord within me while attending the largest gathering of humans in the world: Kumbh Mela. 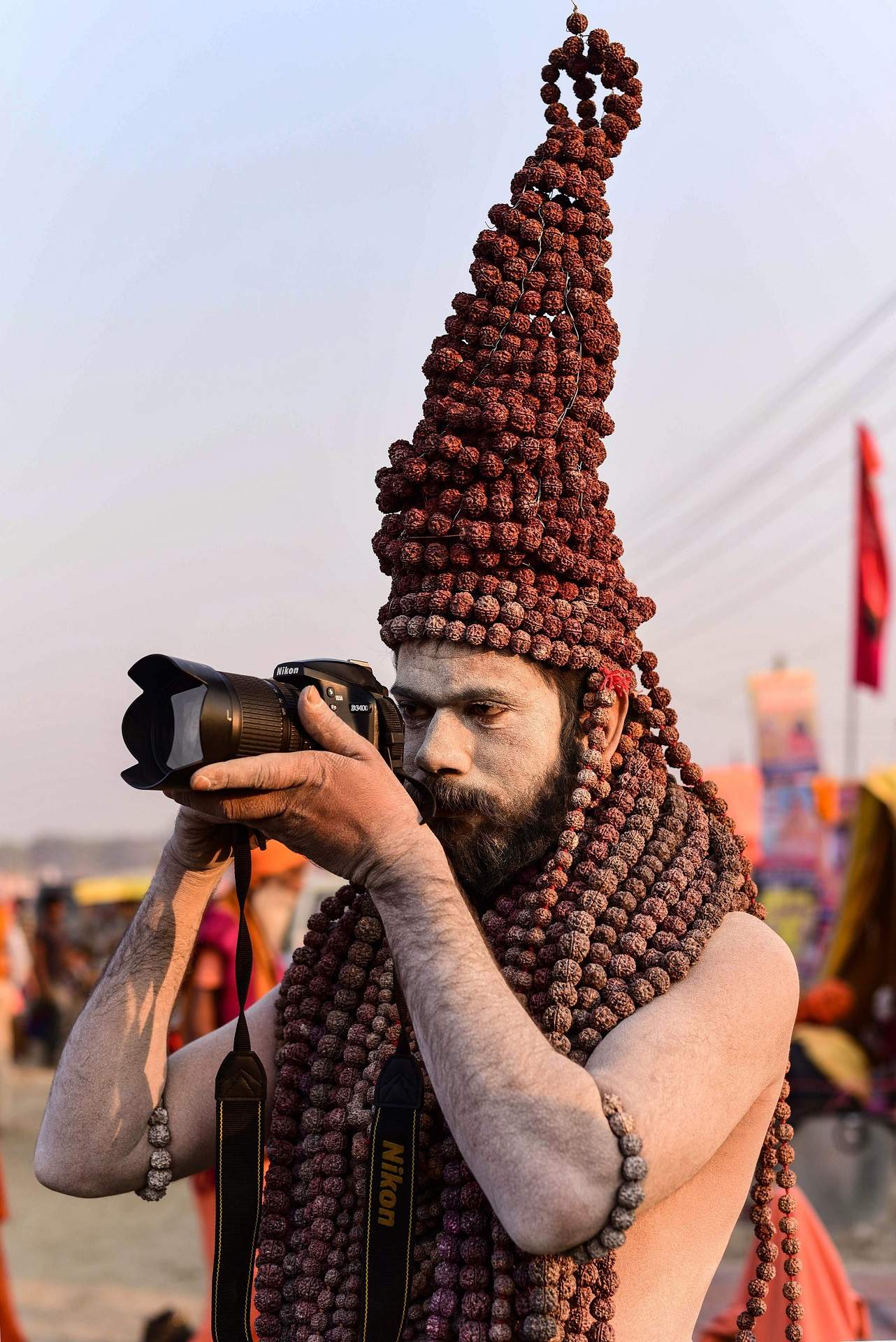 During this 55-day-long spiritual fair held in the city of Prayagraj (formerly known as Allahabad), the aforementioned scenario, in its various iterations, occurs millions of times on a daily basis. And that’s just a conservative estimate. On auspicious days anchored in Hindu mythology like Maha Shivratri (March 4), regardless of near-freezing weather, authorities expect over 50 million visitors to take the sacred bath.

To put things in perspective, imagine half the population of West Bengal and then some, travelling to one location—arriving on everything from ox-drawn carts to chartered jets—to live within a 39 sq km pop-up city!

Fair assumption
Truth be told, despite having come across a Harvard University study which claims that Kumbh Mela was far better organised than FIFA World Cup in Brazil, I was sceptical. That is until I witnessed its `4,200 crore budget being put to good use. Prominent infrastructural examples include a brand-new airport terminal, 10 flyovers, 264 streets, 25 pontoon bridges, 1.10 lakh toilets, 500 e-rickshaws, 4,000 free Wi-Fi hotspots, and more than 1,200 strategically placed CCTV cameras to monitor all this. 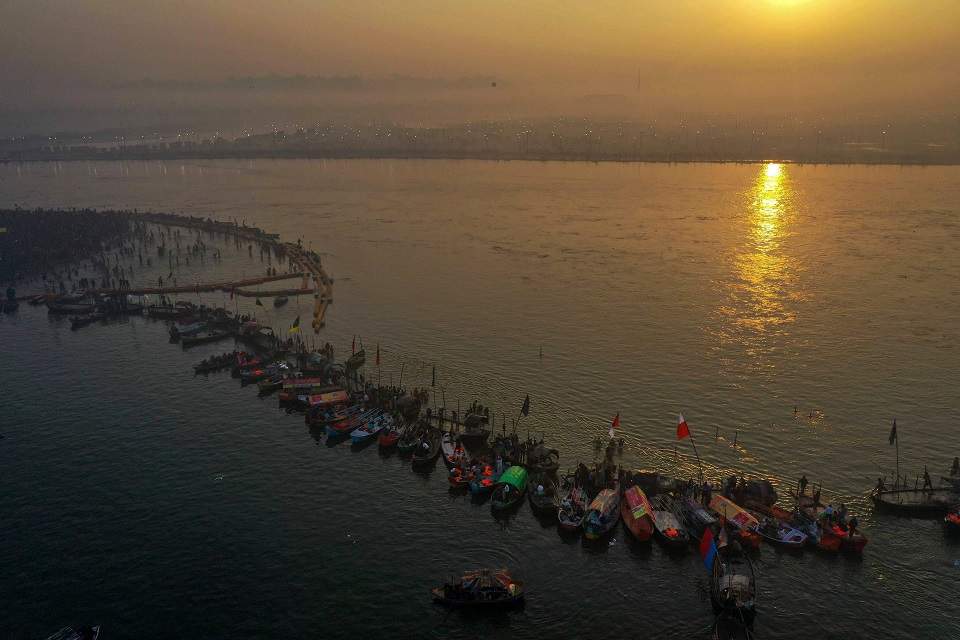 Not to mention the veritable army of enlistees, workers, and government officials—some donning reflective orange jumpers with the words #MeForSwachhKumbh emblazoned on it — maintaining law
and order, sustaining sanitation, distributing informative booklets, and providing guidance to visitors and pilgrims alike. However, if one peeks beyond staggering statistical figures, there’s no denying it that things can get overwhelmingly chaotic in the tent city. Nevertheless, there is a method to this madness.

Millennial hotspot
To chronicle this astral conjunction, I made my way from our ‘glamping’ site, Indraprastham City, to 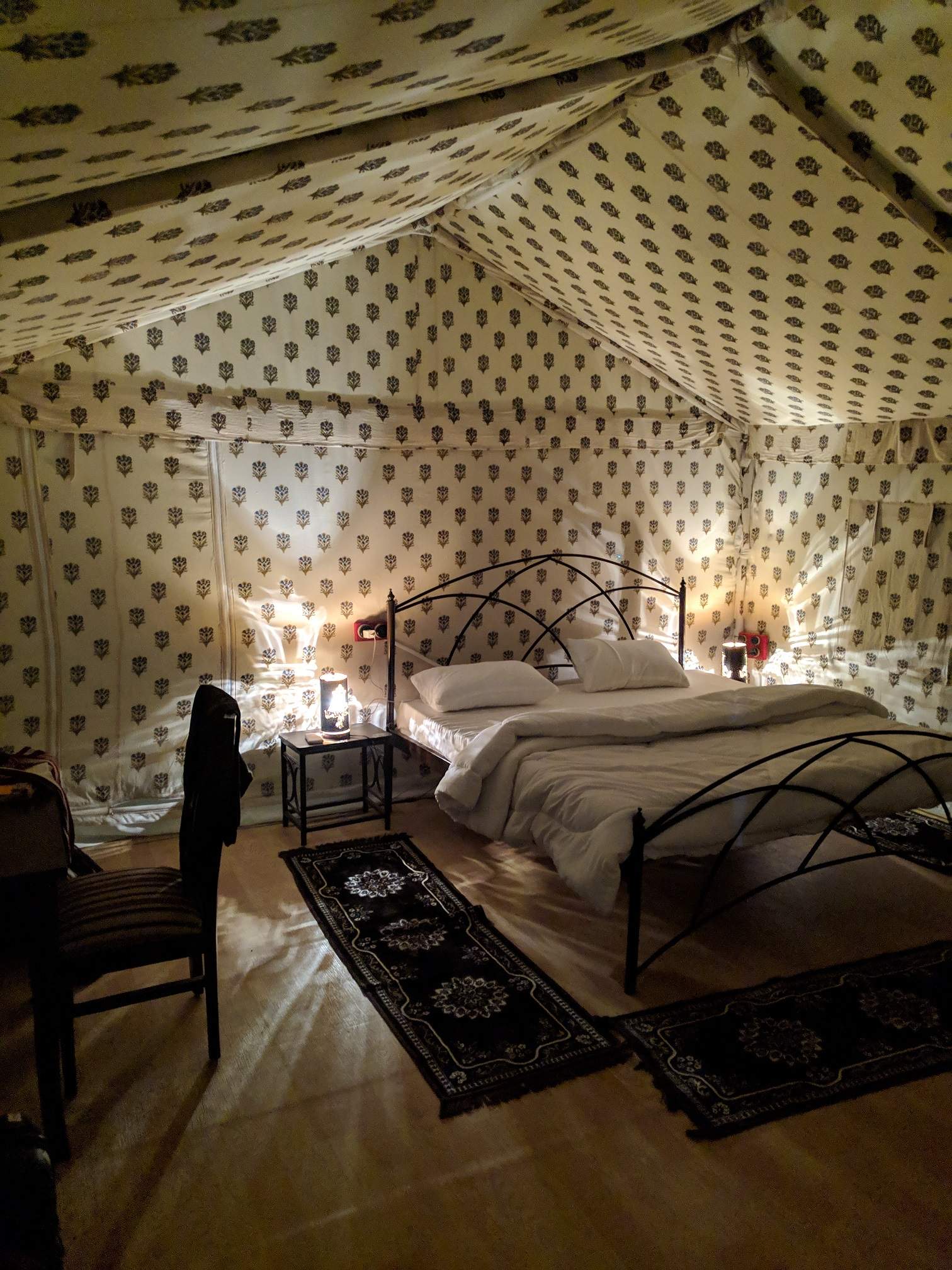 the Sangam point (a confluence of three rivers: Ganga, Yamuna, and mythical Saraswati). During this three-kilometre walk and subsequent boat ride, it became apparent that the 2019 edition of Kumbh Mela boasts another unique facet. This spectacle of faith also caters to the luxury-focussed traveller now—a first since the mela’s inception early in the first millennium CE.

Ever since UNESCO inscribed the gathering on its list of ‘Intangible Cultural Heritage of Humanity’, visitors from 192 countries have reportedly arrived at the festival. So it comes as no surprise that besides ‘glamping’ options—complete with deluxe tents providing five-star amenities, multi-course sattvic meals, and private dipping areas within a sprawling Ganga Ghat—authorities are converting the Kumbh Mela into a hotbed of activities to target affluent millennials.

Case in point: Arail Ghat’s adventure sports outlets where one can go water zorbing, parasailing, wall-climbing, and, if the weather conditions are favourable even hop on to hot air balloons to watch
the sunrise.

Beyond the river banks
Nowadays, one can also hire helicopters for a ‘six-minute joyride’ to witness the legions of devotees congregated at the Sangam from an aerial perspective. For those who cannot afford the choppers, virtual reality kiosks have been set-up across the various sectors of the mela with immersive 360° videos of the Shahi Snan (royal bath). But, if you prefer the physical realm and enjoy graffiti and paintings, step out for a walk and discover over 10,00,000 sq ft of sanctioned wall art spread across the area. 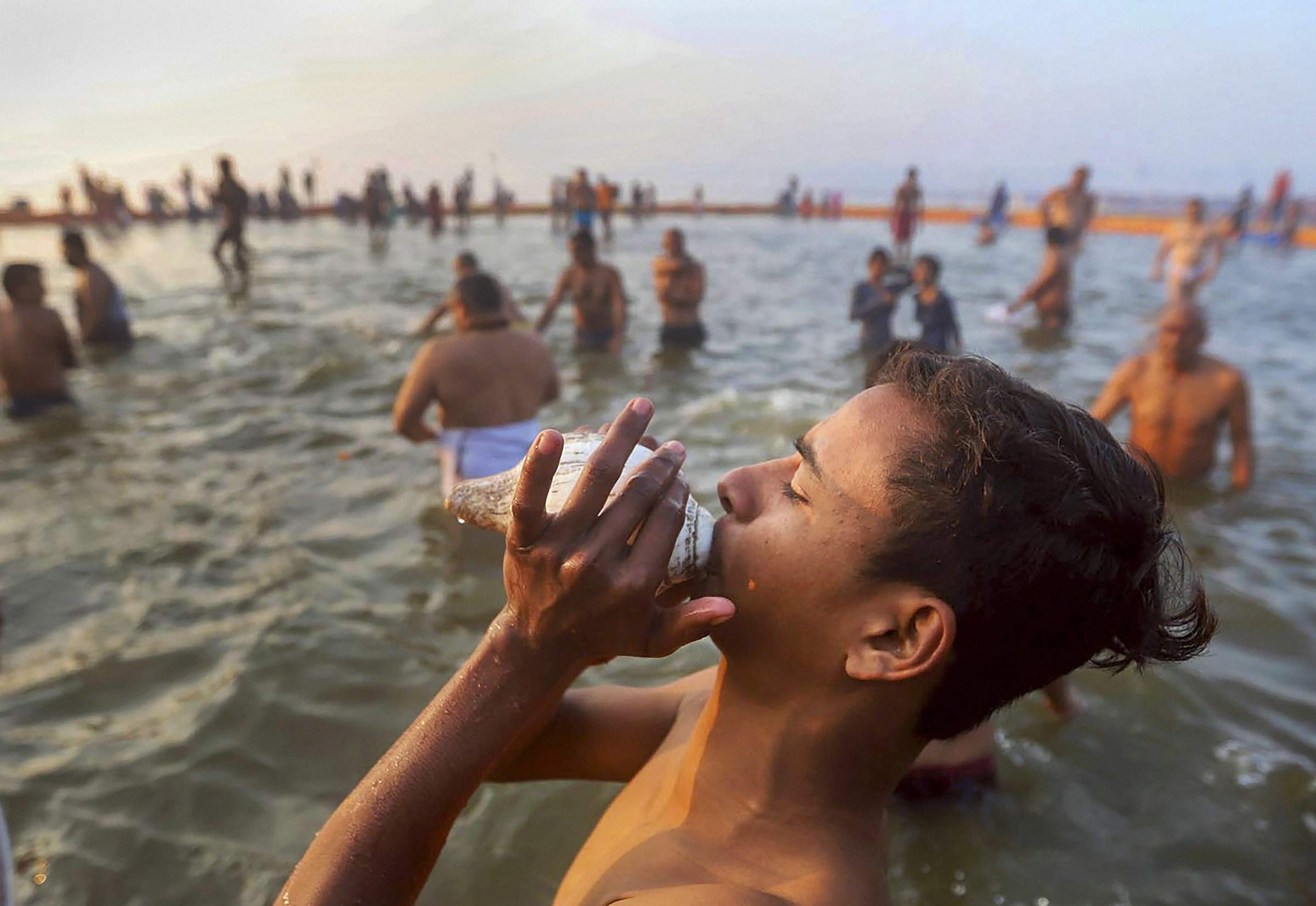 Also worth checking out are the yoga programmes, food courts that dish out cuisines from 14 states, amusement parks, Kala Gram (a creative hub selling artisanal merchandise from across India), book exhibitions, laser shows, and six large convention centres where over 500 of India’s top singers, dancers, and artistic luminaries (like actress Hema Malini) host performances. It’s only when I came across all of this that I realised the fair isn’t all about Vedic hymns, conch blowing, and existential debates underneath Kalpavriksh trees. 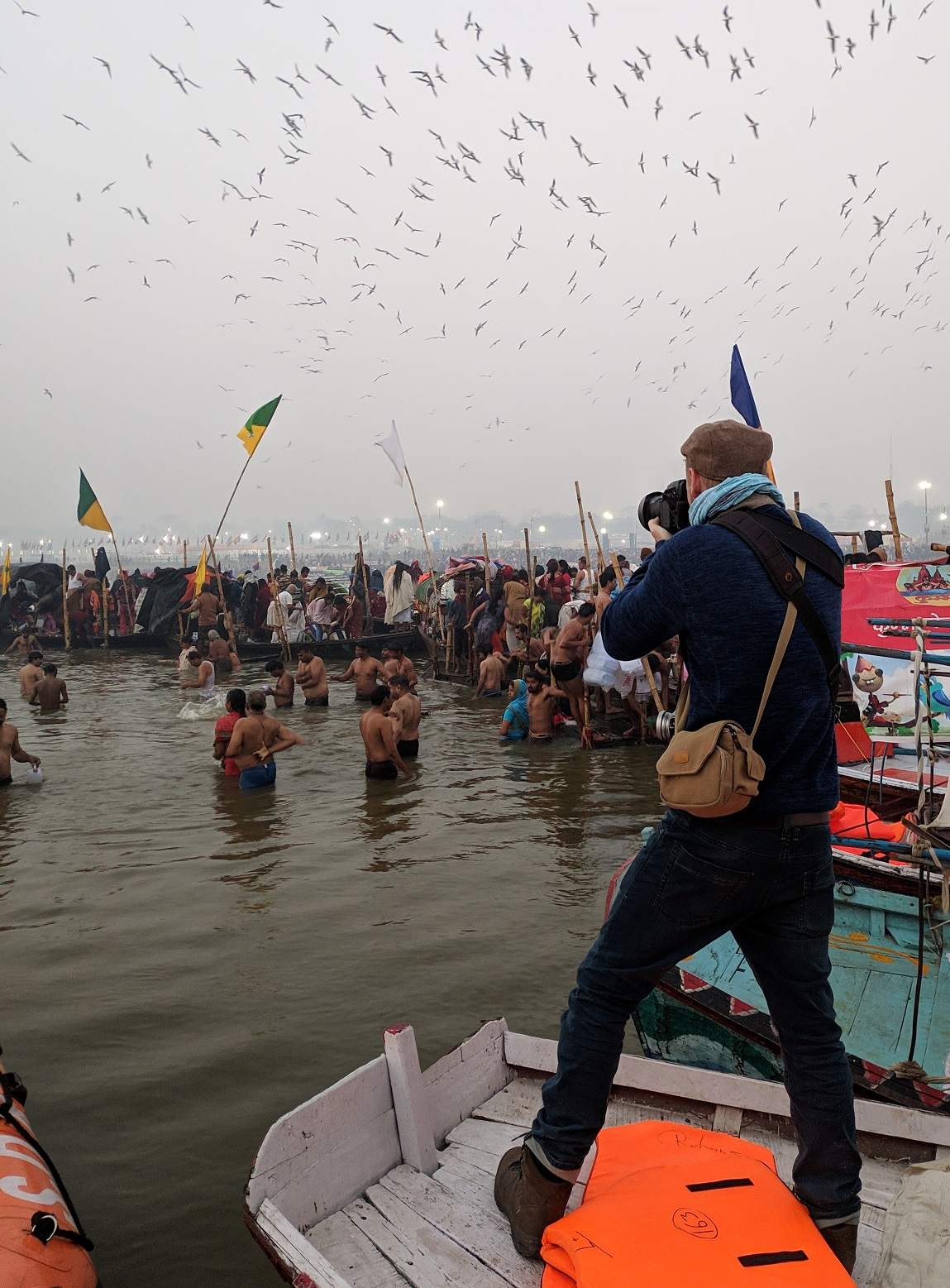 The fact of the matter is, regardless of how many Kumbh Mela books you’ve read or documentaries you’ve watched, words and film cannot do justice to this unparalleled, multi-sensory encounter. In spite of your religious inclination (or lack thereof), to gain a deeper understanding of why millions upon millions venture out on such a quest and display this unflinching trust in something sublime—one has to experience it personally.

Walk through the second-hand smoke exuding from ascetics’ tents and let yourself get ‘politely jostled’ by the mantra-chanting multitudes. Step out onto the river bank, undeterred by the 7°C weather, in the wee hours of the morning. Sounds emanating from Siberian seagulls squawking overhead and the public
addressal system may drown out your own thoughts. As you stand there in your bare-minimums, flash-
toting foreign photographers may appear voyeuristic. But, fight the urge to flee and take a dip in the river.

Everything else about the Kumbh Mela gets hushed out, when you’re underwater. There you’ll find fleeting moments of peace. And if attained, such ephemeral instances will last you a lifetime.

The writer was in UP on invite by Uttar Pradesh Tourism.

*************************
Kumbh calls
An ancient tradition, the mela draws people from all walks of life. It is celebrated four times over the course of 12 years. Depending on how the planets and stars align, the pilgrimage rotates between Haridwar, Ujjain, Nashik, and Prayagraj. Technically, this year’s gathering—held at Prayagraj—is known as Ardh Kumbh Mela.

Double dip
The most important ritual at the Kumbh is the snan or auspicious bath. Devotees wake up as early as 3 am to wait for their turn to bathe (after saints from various akharas or religious groups take the dip). It is believed that such a ritual will absolve them and their ancestors of sin, thereby ending the cycle of rebirth.

Shutterbug haven
Capturing an event so inconceivably grand and vibrant as the Kumbh is considered by most photographers as an exhilarating experience. If cultural customs are respected, and proper etiquette is followed, covering the mela is like finding all of India within a single frame. That’s why candid shutterbugs from around the planet flock to the event.

Mark Twain’s Kumbh visit
History books tell us that the distinguished American novelist, Mark Twain, visited the Kumbh Mela in 1895. He wrote, “It is wonderful, the power of a faith like that, that can make multitudes upon multitudes of the old and weak and the young and frail enter without hesitation or complaint upon such incredible journeys and endure the resultant miseries without repining. It is done in love, or it is done in fear; I do not know which it is. No matter what the impulse is, the act born of it is beyond imagination, marvelous to our kind of people.” More than 124 years later, his words still ring true.