'I grew up watching those cool cars in James Bond movies, to be racing one is an absolute joy,' says Aston Martin academy driver Akhil Rabindra

His journey is in the motorsport racing circuit has been an exciting one. From racing in the National Go Karting Championship to becoming the first Asian to be re-selected in 2020 for the Aston Martin Racing (AMR) Driver Academy, Bengaluru's Akhil Rabindra has come a long way. The AMR Driver Academy was setup in September 2018. Twenty three drivers in the age group of 17 and 25 years were selected by a group of judges that included 3-time Le Mans 24 Hours winner Darren Turner, works FIA World Endurance Championship drivers Jonny Adam and Maxime Martin, and Aston Martin Racing team principal Paul Howarth. The 23-year-old Akhil is among the 23 elite young drivers from across the world getting trained at the academy.

Back in India the Bengalurean has proved his mettle by winning the JK Tyres MMS Rotax Max National Rookie Championship, the Vice Championship of Amaron National Karting Challenge and the Red Bull Kart Fight in 2011. He was also the youngest finalist in the saloon car category in the Toyota Ethios Racing Series and earned a podium finish at the Exhibition Race in Chennai.

Why did you switch from single-seater series to sportscars, particularly endurance racing?
When you set out to become a racing driver, your goal is always F1 and I had the same goal in my mind. After a few years of racing formula cars, I took a step back, analysed and realised that I wanted to change paths. This was mainly because there was a greater chance of becoming a Factory Driver with a manufacturer in the GT world compared to getting a seat in F1. The reason why I switched to GTs was that it’s two or more drivers and the budgets are more affordable.

How does it feel to be trained and supported by Aston Martin Racing, a brand that has a heritage of fielding world-renowned drivers such as Stirling Moss, Caroll Shelby?
It definitely feels great to represent the brand as an academy driver, they have achieved so much in racing and are making their return to Formula 1 next year, I grew up watching those really cool cars in the James Bond movies and to be racing one of those cars is an absolute joy.

How has your motorsports journey been (coming from India), given that most Indians are only aware of F1 / MotoGP and very few are even aware of the endurance racing series?
The journey has been great so far, it’s been 10 years, and I have raced around the world.Yes, many people in India are not aware or well-versed about racing like cricket. Most people know only of F1 and even fewer know what GT racing is. Saying that the aptitude for racing and cars has always been strong and is growing every year. There has been a lot of learning for sure. The principle of doing well is the same though.We need to form a good team, a good car, an equal or better teammate and win as many races as possible. The important part is to learn and grow with every race, it is really important not to lose hope in those tough times but also not  forget, to enjoy the good times.

What is on the cards for 2021?
I definitely want to step up and race in the GT3 category, it has been a few years in GT4 and I am ready to move forward. It is not easy on all fronts to move up as there are larger demands, right from the funding to being much fitter. We will be analysing what is the best championship to do, the right co-drivers and the team over the next few months.

How would it feel to be part of the Aston Martin Racing family for 2021, knowing there will be an esteemed racing driver part of Aston Martin?
I had a good 2019, 2020 is going okay but I am yet to make a mark and show my true potential. Staying with Aston Martin is what I want to do for 2021 and having their support is important. It’s always a privilege to race for this iconic brand and to be a part of it. It is one thing joining and being a part vs being a part and making a mark, I want to choose the latter. 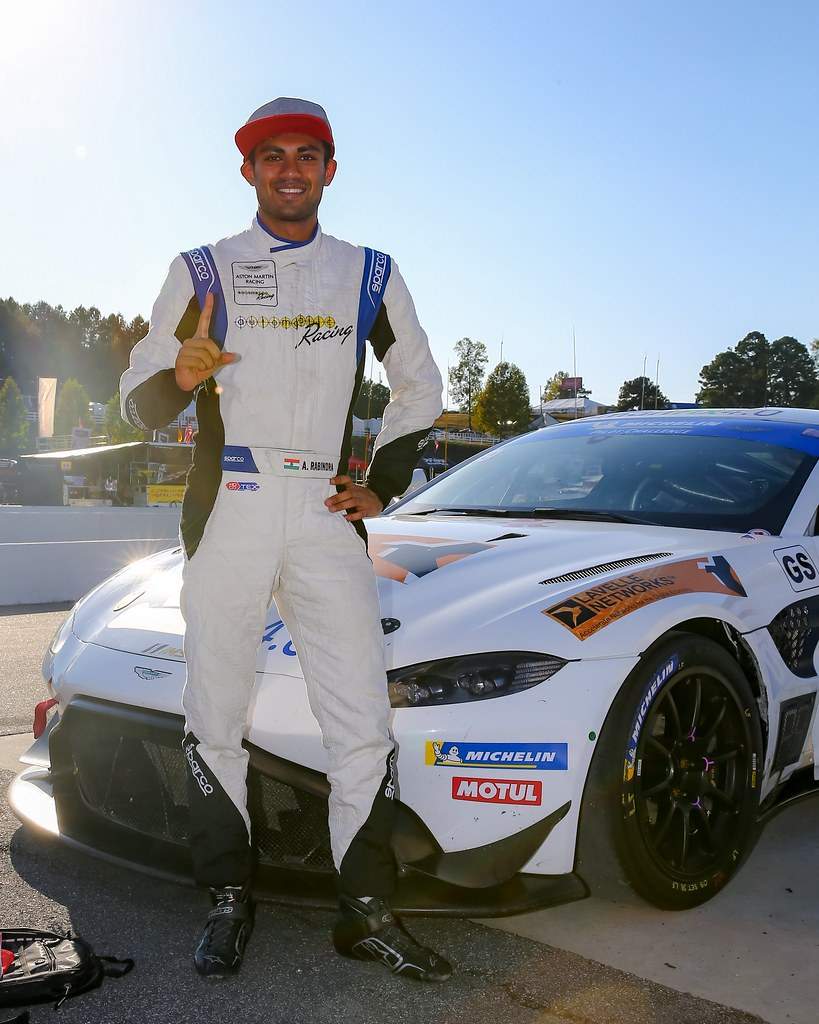 What's your fitness routine like? Does it also include mental health training?
My fitness training is different from other sports as we focus more on the endurance side of training. There is an element of strength involved too to fight the G forces and having the right combination of endurance and strength is important. On the mental side, I do a lot of prep work before a race weekend which is important.

What do you do when not training? Do you read, play another sport or just chill?
I enjoy playing different sport, I play Badminton, table tennis, cricket, football, basketball, and tennis. The days I am not training I like watching stuff online and relaxing with friends and family. I do like listening to audio books when I’m travelling or on the weekends.

What has your learning been so far? How do friends and family react to the success you have achieved so far?
My friends and family have been incredibly supportive through out the years and I can’t thank them enough. The learning for me has been immense both on track and off track. You meet so many different people from around the world and get to work with different cultures and this has been something you can’t learn in school. Being a sports person several important factors like work ethic, fitness, nutrition and team work become so integral which an asset for life.

Any aspirations?
I want to win LeMans.

What's the long-term goal?
I am still pushing everyday to become a factory driver with a manufacture and trying to win as many races I can on the way there.

Advice to aspiring racers.
In today’s world where competition is very tough, make sure you give every chance you get your best effort; you never know who’s watching you or when one door might open. Saying that, it is important to work on your fundamentals and make sure they are rock solid. The basics will take you a long way and help you in drive whichever race car you choose.