Arts, crafts & history: We’ve curated a list of heritage sites and artisan clusters to visit during your next holiday

Culture, world over, is getting a new lease of life as heritage-inspired luxury becomes the new buzzword in tourism. Here’s our ready reckoner of heritage sites and artisan clusters that have defined the history of Pollachi.

Neighbour to the Anaimalai hills and a long-standing biodiversity hotspot within The Western Ghats, Pollachi is the land of green pastures and even greener trees. As the homeland to over 39 endangered and threatened species of plants and animals, the region is one of the most sought-after locations for naturalists. However, there is more to it than just its verdant beauty. Ask the locals and you will realise that Pollachi’s history, craft traditions, and architecture are its best-kept secrets. With most hotels and resorts offering nearly the same list of things to do, you need to find the right fit. We talk to regular travellers, locals and experts, and factor in their top picks to bring you the last custodians of culture and craft in the region.

Every thread counts
The stacks of Negamam saris, sporting a traditional medley of yellow and brown hues or other monochromes, all started out as reams of hand-dyed cotton yarn. Then, over a period of three to four days, craftsmen warp and weft the yardage and weave away like the master artisans of Negamam before them have done for over 200 years. “The end product is a distinctive 45-inch width, 8-yard long sari that is distinguished by its weighty texture and easy drape,” shares Jayashri Samyukta, executive committee member of the Crafts Council of India. Periya Negamam—a prized handloom centre of Southern Tamil Nadu is located in one of the most idyllic regions of Pollachi, which is 45 km from Coimbatore. Ensuring a market for this dwindling weave, a step in the direction of contemporising handloom products from the region comes from the ‘farm to fashion’ brand Ethicus that made it’s Lakmé Fashion Week debut in 2018. Though your visit to the village might not afford a chance at the handloom, this expedition is a slice out of the weaving traditions of the Kongu region and offers shopping opportunities.

Leaf out the rest
Now synonymous with eco-friendly wedding decor, ola kizhis, meen and flowers that are made from palm leaves and sholapits are often from the regions surrounding Pollachi. Dried, stripped and dyed in a pigment before being knotted and folded by hand, Thattai Pinnardu is a craft that has been passed on through the generations. In the public eye since his 30-foot hanging art installation took up space in Chennai’s Phoenix Marketcity, T Krishnaswamy—a custodian of this reed based art—learnt the folding and knotting techniques observing other artisans who were creating decorations for the Zamindars of Uthukuli. “I tried to trace the craft back to its roots, to know how it all started. But my relatives just say they have been practising it for generations. I have been at this craft for 30 years,” shares Krishnaswamy, whose wife Karuppathhal is also involved in the craft. Though a labour intensive profession, years of practice has ensured that each figurine—either a flower, parrot, fish or deer—only takes up to three minutes to make. “Krishnaswamy is one of the only artisans from Bodipalayam that continues this palmyra craft. He’s also one of the oldest craftsmen that the Crafts Council of Tamil Nadu has collaborated with. We keep organising workshops in Coimbatore where people can learn this languishing art,” shares Jayashree Ravi, secretary CCTN.

Palm springs
Attempting to trace the origins of the intricately engraved letter on a block of palm jaggery from Pollachi will most likely lead you to the traditional cottage home industries of Bodipalayam. Corresponding to the unit where the jaggery is prepared, each letter narrates the life cycle of the Pananga Karupatti that is cooked and processed by individual entrepreneurs in the village. Tapped from the male palmyra tree, the pathaneer (nectar) is collected in earthen pots that are slaked with lime. “This is done to ensure that it does not ferment and turn into toddy,” explains Amarnath, even as Pravin Shanmughanandam, founder of Pollachi Papyrus tell us that the unfermented palm nectar finds a substantial market in bigger cities. “If there was only a way to preserve the neera for an extended period of time, carbonated drinks would no longer find buyers,” he says with a laugh. Boiled in a large vat over a firewood flame for almost six hours, the colourless liquid first takes on a deep golden shade that is bottled and used as Thaenbagum before it turns a deep burnt caramel brown. Stirred until cool, and later poured into moulds, the final product, in some cases, contains additional flavouring like ginger. Learn the tricks of this exacting trade if you can stand the heat (We mean that quite literally). And for those who cannot, there’s always karupatti sweetmeats up for grabs.

Dance with the past
This folk art form of Tamil Nadu was once considered only fit for royalty. Carried on by the descendants of Veerapandiya Kattabomman, who believed that they belonged to the lineage of the gods, Devarattam came to be known as the dance of the gods. An art form that has lost its importance and deteriorated drastically in recent years, it is only the will of a determined few that has kept this ancient dance alive. One of the oldest folk arts of Tamil Nadu alongside Thappattam and Therukoothu, a tiny group of performers in Pollachi are among the few clusters that carry on this age-old tradition today. Performed by a group of men to the beat of the umri melam, Devarattam has 18 basic steps that are used in a number of permutations and combinations, of which 72 have been standardised. Enacted in two parts, the performers start by worshipping the musical instrument and the musicians, which is followed by a fast-paced dance. Part of a trail curated by Pollachi Papyrus, it isn’t just the antiquity, but the chance to partake in a culture that is on the verge of extinction that makes this experience appealing.

What’s in a name?
There’s something in the city for those who would rather explore folklore—especially if you’re up for an additional history lesson. The Subramania Swamy Temple—where the 700-year-old structure spells out the etymological origins of the district of Pollachi, makes for an ideal destination for those looking for a quick drive “Carvings on the temple refer to a place called Erichil Puzhil Vaichi. The Kongu region was primarily Shola forest land, which was burnt to make way for settlements. Erichil Puzhil Vaichi translates to burnt Shola settlement; Pollachi is a corruption of the terms Puzhil Vaichi,” explains culture writer, B Meenakshi Sundaram. Another explanation, since the city was one the largest marketplaces of the south, is that the name was a derivative of Porul (Commodity) Aatchi (Control).

Divine intervention
Little known to many, the banks of the Aliyar near Pollachi hold a key piece of Jain history within the confines of the Aadhali Amman Temple. Now the presiding deity of the temple, the sculpture of Aadhaliamman is believed to have originally been that of a Tirthankara, circa 10th Century AD. “The idol has a mukkudai (Triple umbrella) over his head and the yakshis (Female attendants), on both sides, are fanning him with their kavaris. On moving the silk parivattam (robe) at the statue’s pedestal you see the sculpture is sitting in the padmasana pose. The lion motif on the statue’s pedestal proves that the Tirthankara is none other than Mahavira”  explained noted epigraphist R Jegadeesan in a previous interview with TNIE. The transformation is believed to have happened some 20 years ago when people belonging to nearby Kottur village found the damaged sculpture and had it repaired. 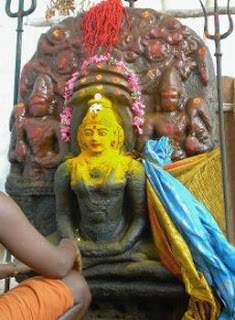 ●  Pollachi Cattle Shandy: Envisioned at restoring past glory of the Pollachi Shandy—one of the largest cattle markets in south India, the Vanavarayar Foundation hosts an annual Kongu Naatu Kaalnadai Thiruvizha (cattle festival). Putting on display native breeds of cattle—including the Kangayam bull, dogs and poultry among others the festival hopes to encourage the use of indigenous lifestock by farmers and agriculturists in the region. On February 8,9 and 10, 2019. At Zamin Samathur.

●  Puravipalayam Palace: Built over 300 years ago, this palace is the ancestral home to the Gopanna Mandradiars of Puravipalayam. Among the heirlooms of the family is a rare photograph of a ruler in regalia on a palanquin in a procession near the palace.

●  Uthukuli Palace: Belonging to the ancient Kalingarayar clan that ruled parts of Western Tamil Nadu, Uthukuli Aranmanai heritage dates back to over 800 years when the architect of linking rivers in  India—Lingaya Gounder constructed the 90 km long Kalingarayan canal over the Bhavani. Now containing various artefacts like swords, seals, coins and more, this palace is a celebration of the pioneering spirit of the Zamindars of Uthukuli.