This Akshaya Tritiya, we trace the artisanal gold trail to the streets of Coimbatore

Walking through the narrow lanes of Big Bazaar Street and Raja Street, in Coimbatore, Tamil Nadu, one would never guess that the country’s most coveted designs in gold are quietly being cut, filed and polished here over smouldering coal furnaces by master artisans.

The city’s craft is so famous that ace designer Sabyasachi himself says he gets some of his most sought-after heritage jewellery pieces custom-made by the smiths in Coimbatore. “I do not find that surprising at all,” says Rajesh Govindarajulu, grandson of PA Raju Chettiar, one of the pioneers of the gold jewellery business in Coimbatore. “Though we have our own designs that we are famous for, the smiths in the city, some of whom have been in this craft for generations, are capable of replicating any design that is not in our DNA with the kind of the intent and experience they possess,” he adds. 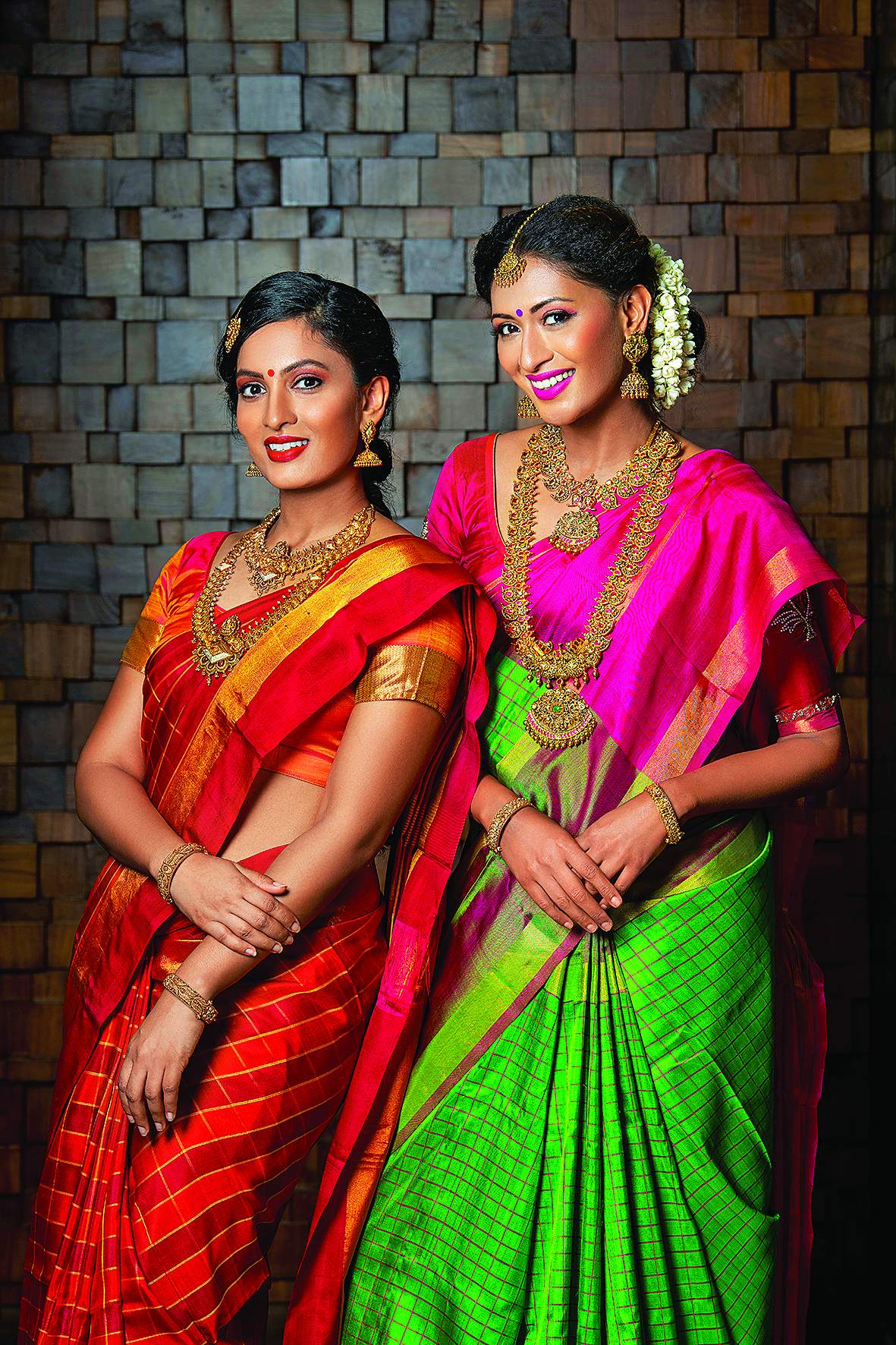 Crown jewel
Rajesh fondly traces a finger across a picture of his grandparents at their wedding, wearing matching gold necklaces encrusted with diamonds, and it is hard not to be awestruck by the clean cuts and design of the piece of heirloom jewellery. “This city has a long-standing romance with gold and is undoubtedly the hub of handcrafted fine jewellery,” he says.

The golden tale
Going back to where it all began, nearly a century ago, when a young Raju Chettiar moved to Coimbatore, he began making few handcrafted pieces of jewellery and selling them at the Pollachi weekly market. But one trip to Bombay and he quickly understood that there was more to jewellery making in terms of designs and technique and he soon set up a large workshop which employed hundreds of goldsmiths who perfected the craft and passed it on over generations. “These men were so skilled that we could show them a design from any part of the world and in a week they could replicate it flawlessly and deliver it to us,” says Rajesh. PA Raju Chettiar and Brothers also had the privilege of making the gold kavacha (armour) for the deity in Sabarimala in 1987. PAR, who was one of the main suppliers to Tribhovandas Bhimji Zaveri Jewellers, was also the founder of Tamil Nadu Jewellers Federation and the Coimbatore Jewellers Association, thereby putting the city on the gold ornament business map.

Tech trouble
However, the artisan gold business took a hit in the ’80s when machine-made jewellery became all the rage. “It involved less manpower, faster delivery time which automatically brought the costs down and also helped with the demand-supply gap. Before we knew it everyone was opting for machine-made chains and bangles,” said R Vijaya Kumar, an independent jeweller in the city.

He further points out that while it takes anywhere between 10 days to two weeks to make an intricate handcrafted chain, it would take barely three days to make something similar using a machine. “But if one has a keen eye for jewellery, they would always know the difference between a handmade piece and a machine-cut item,” he adds.

Search of green pastures
The mini-industrial revolution of sorts that took place in the gold industry after the entry of machine-made jewels put the goldsmiths in the city in peril and this invariably led to a lot of them moving out of this profession. Few decades ago, goldsmiths were dealing with 25 kilograms of gold per week. Now, they barely get 25 per cent of the orders they used to get back then. “During the gold control period, the
wastage went through the roof and while there was a lot of demand the supply did not match it. However, after the ’80s fiasco when the smiths made a comeback they were more of a mixed bag and most of the skills never survived,” explains Govindarajulu.

The city’s signature
Despite all the hurdles, the city, however, continues to churn out masterpieces in gold thanks to the comeback of handcrafted jewellery craze over the past few years.“Coimbatore is known for its unique styles in jewellery called the kasavu and nagas. Nagas is a type of temple jewellery which is steadily making a return in the fashion industry now and our smiths are working overtime to come up with new designs while retaining the old charm of it,” says Ethiraj G, who owns Kanahadhara jewellers on Big Bazaar Street.

Golden elixir
Another reason why the jewellery made in the city remains popular is the Siruvani river water which brings out the desired shade in gold in the processing stage. “Even now, many manufacturers from neighbouring states like Andhra Pradesh and Karnataka take barrels of water from Coimbatore by trains because the brightest yellow shade of gold is obtained when it is washed and processed in the Siruvani water compared to any other water,” says Ethiraj.

North meets South
While South Indian jewellery, which is known for its light-weight aspect is famous in its own right, Coimbatore continues to be the largest crafter and supplier of handmade jewellery to many wholesale businesses and designer brands in North India. “Whether is it is any intricate filigree work or meenakari and kundan work, the smiths in our city can craft it to perfection, regardless of the size of the piece,” explains Ethiraj, whose designs are sourced by major jewellery houses across the country. The amount of skill involved in making this heritage jewellery and the innovations along with the sheer volume involved has helped Coimbatore retain its name in the artisan jewellery business in India, he adds. Ethiraj now, takes orders from a minimum if five to six independent jewellery firms in North India. One-of-a-kind
When asked about the love for handcrafted jewellery, Murugan V, a smith who works for a private smithy in Big Bazaar Street says, “The personal attention and love that makers and artisans infuse into their work is evident in the masterpieces that they create. What most people don’t understand is when you own a piece of handmade jewellery, you own something unique unlike its mass-produced counterparts.” Taking Murugan’s word for it, once you step into the small gold pattarai he works in, the kind of work that goes into each ornament, big or small, becomes evident.

Labour of love
The making of each ornament goes through several stages, like melting the gold and making the desired shape and then cutting and filing it to perfection before etching stones and polishing it. Several men, too busy to care about the sweltering heat, sit concentrating intently trying to saw off small specks of gold or polish the sharp edges of a pendant with pliers and small hammers. “Just a few years ago, we had a much bigger workshop with more than 50 smiths working for us. But over time the volume of orders came down drastically so we had to downsize,” says R Manikandan, who owns the workshop Thomas Street.

He goes on to explain that the future of the handcrafted jewellery business is a haze as many from the younger generation do not opt to learn and carry forward the art. “Many youngsters prefer cushy jobs in air-conditioned offices but what they do not understand is that this is a dying art and unless everyone steps forward to grasp the seriousness of it, the craft would fade,” he added.

Innovate and adapt
Although the situation looks grim, all is not lost, says Ethiraj. As a result of its uniqueness, custom handmade jewellery pieces can have a high price and a high monetary value. While the price not only reflects the individuality of each piece, it also shows the high quality of the materials that are used to make each item, explains the jeweller. The best materials combined with the distinctive look of handcrafted artisan jewellery pieces make them pieces of history that can be passed on through generations.

“Yes, there are only 30 per cent of goldsmiths now compared to the numbers in early 2000. But if there is one thing that is a constant, it is the rage and the value for handcrafted pieces,” he says, adding that though the number of pieces crafted every year are small, the market for it is real. “However, it is important to evolve according to times. Learning new techniques that can increase the speed of delivery, perfecting the skill and passing it on to those who are willing to learn is of utmost importance,” he says.