This Mother’s Day, Indulge chats with Neha Dhupia about how she strikes that much-coveted balance between family, work and fitness

Actress, talk show host,  podcast producer and now a mother to a beautiful baby girl — Neha Dhupia is living the best phase of her life. This week, as she celebrates her first Mother’s Day and wedding anniversary, she has decided to take a break with daughter Mehr and husband, model-actor Angad Bedi. From a surprise low-key wedding last year that took netizens by surprise, to delivering a baby girl a few months ago — it has been a busy yet fulfilling year for the Kochi-born actress. The break, she says, couldn’t have come at a better time. “We are travelling out. The only plan we have for this vacation is to do nothing! Both Angad and I are tired due to our busy work schedules. This is a break to spend time with our daughter,” says the glamorous actress over a phone call from Mumbai. She informs us at the onset that she just got home from work, and was with her five-month-old baby girl as we were speaking; we could even hear the child cooing in the background. “When I’m at work, I give my 100 per cent, but once I’m home, it’s only Mehr. I try to keep the balance,” says Neha, making it clear that she can straddle both worlds — that of her stardom and motherhood, quite seamlessly.

Painting the town red
A little over a year ago, however, she confesses, she wouldn’t even have imagined in her wildest dreams that she would be happily married with a baby girl, in a span of a few months! But life took a turn and things have never been better for the Tumhari Sulu actress. “It all happened so quickly, but I wouldn’t have wanted it in any other way. It was overwhelming, but it was beautiful,” says the host of one of India’s most popular podcasts, #NoFilterNeha.

If there’s anything that has remained constant over the years, it is her way of dealing with challenges that life throws at her. With no film background, Neha caught the attention of cinemagoers with her debut in 2003’s Qayamat: City Under Threat, and continued to do roles that made her stand out among her contemporaries. More than 15 years later, Neha continues to be in the limelight for her work across various mediums — cinema, television and podcasts, among others. She embraced motherhood without shying away from the pressure, while continuing to socialise, work, and be the talk of the town.

Not the one to hide her baby bump or the fact that she was pregnant before her marriage — Neha is vocal and proud of the choices she makes. “The whole thing about being pregnant, getting married and having the baby, literally in that order, was sudden. I feel like Angad and I are still going through our honeymoon phase, and we’re enjoying it even more with our daughter,” says the 38-year-old. Mehr has only added to that happiness, she gushes. “I never thought I’d love someone infinitely more than I love everybody else in my life. I must admit that being a mother is a full-time job, and there’s a reason they say that. But it’s the best job you could ever take up. Those little hugs, when Mehr clutches on to my fingers, and heavenly smile make my day, every day.” A fine balancing act
It’s surprising that in today’s world, there’s still so much discussion on the status of a working actor-mother-wife. Neha has constantly broken stereotypes but never made it look like she was going out of her way. She confesses that it seemed like the most natural thing to do — right from her choices of films, as a sex worker in Julie, and significant roles in small-budget films like Mithya, Phas Gaye Re Obama and Moh Money Maya. More recently, Neha mastered the art of reinvention with content-driven movies like Tumhari Sulu and Qarib Qarib Singlle. Throughout her journey, if there’s any principle that the actress with Punjabi roots has sworn by, it is ‘go with the flow’. And, it’s no different when it comes to handling her married life and motherhood either. The diva actually worked until the eighth month of her pregnancy and was back a few weeks after delivering the baby. Even before she announced her pregnancy on social media, Neha recollects having a chat with the producers of her TV shows. “I remember telling them that I want to work post the delivery, and most of them said, ‘Will you?’ But here I am, back with a bang! I love my work and it’s not about giving up on any of them, but it’s about the balance. Sometimes, it gets lopsided. I’m still figuring out the middle ground and maybe I will be, for the rest of my life,” she shares, with a candid air.

Even while she was shooting in the hills, for the heavy-duty adventure show MTV Roadies Real Heroes, Mehr accompanied her on most outdoor shoots. In five months, the infant has travelled to more than 15 cities! “It has been quite a lot of travelling, honestly. I think mama troubles her more than she troubles mama,” she adds, with a laugh. Mommy Neha goes on to explain, “She is so young, and this is an important stage. She just started to sit up, and I don’t want to miss any of it. When I’m back to the hotel room after a few hours’ shoot, I feel like she has grown in just the last few hours.”

It’s no surprise that our conversation veers towards the unavoidable subject of a celebrity kid, and the matter of unwanted paparazzi attention. Neha is a very practical mother, who is fairly well-equipped to handle the realities of showbiz. “We haven’t exposed her (Mehr) yet, because she is still very young. But we know it’s a double-edged sword. We signed up for this. So, I’m not going to fight it, and neither am I going to upload pictures (on social media) until we’re ready,” clarifies Neha. 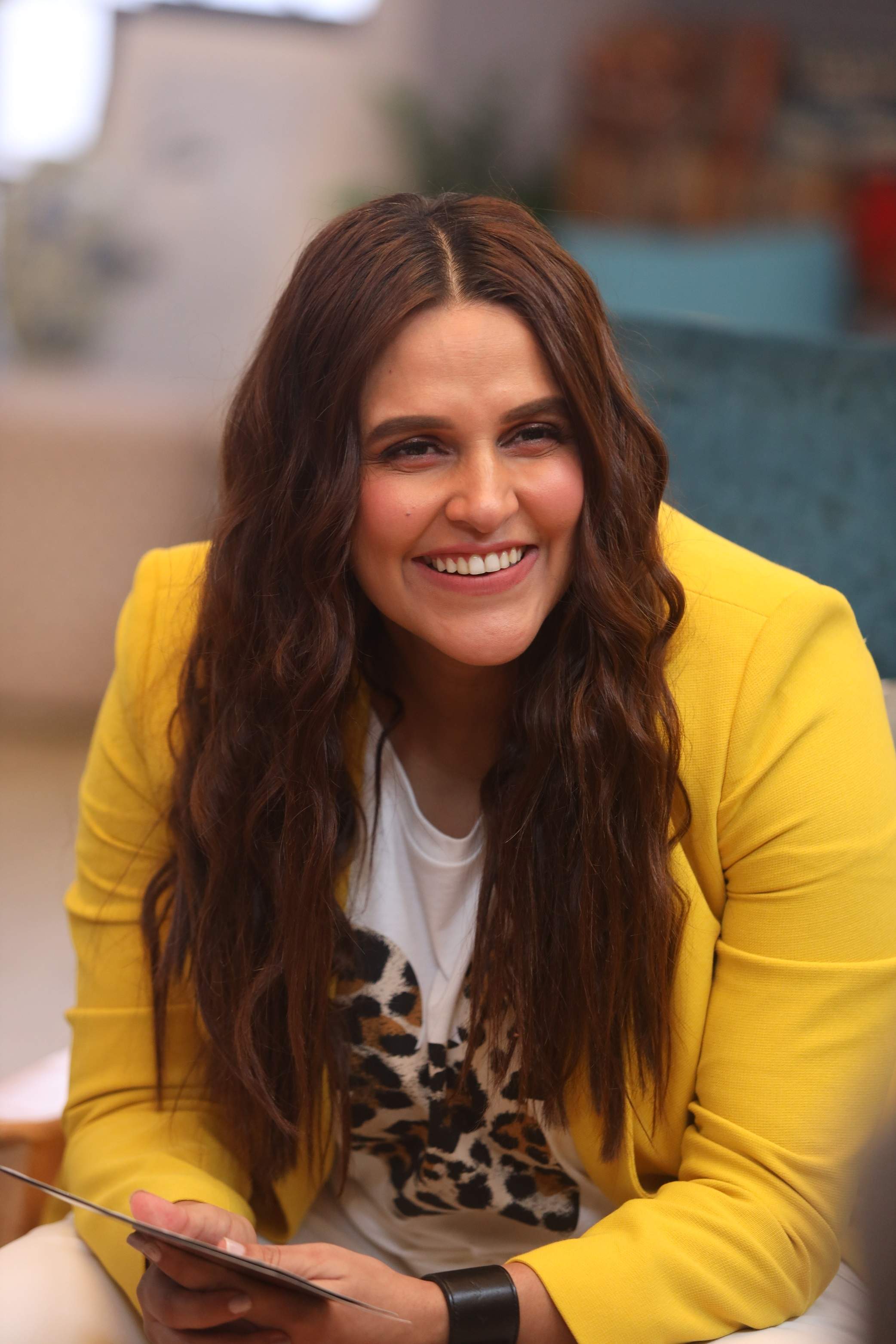 Fit, fab and fantastic
At the risk of stating a cliché, they say happy girls are the prettiest, and Neha is undoubtedly looking her best. The new mom is fit, glowing, and the happiest she’s ever been. Much has been written about her pregnancy look last year, where she also walked the ramp with Angad for designer Payal Singhal at the Lakmé Fashion Week Winter/Festive 2018 in Mumbai.

Post-pregnancy, Neha is in no hurry to fall back in line with societal standards of beauty. “Since Mehr is just five months old, I still need to nurse her every three hours. No matter where I’m in the city, I’m back in time for her. I also can’t cut down on calories since she’s exclusively on my feed. So, my lifestyle has certainly changed. I’m trying to stay off from late night dinners, and sleep. But I know it’s going to take time to be back on my previous fitness routine, and get off all the pregnancy weight — and that’s absolutely okay,” explains Neha. “Meanwhile, I want to make the most of what I have — watching Angad and Mehr wake up from sleep each day, and enjoy my morning cup of tea with them. This is what I want for the rest of my life,” she affirms, with a beaming, reassured smile. 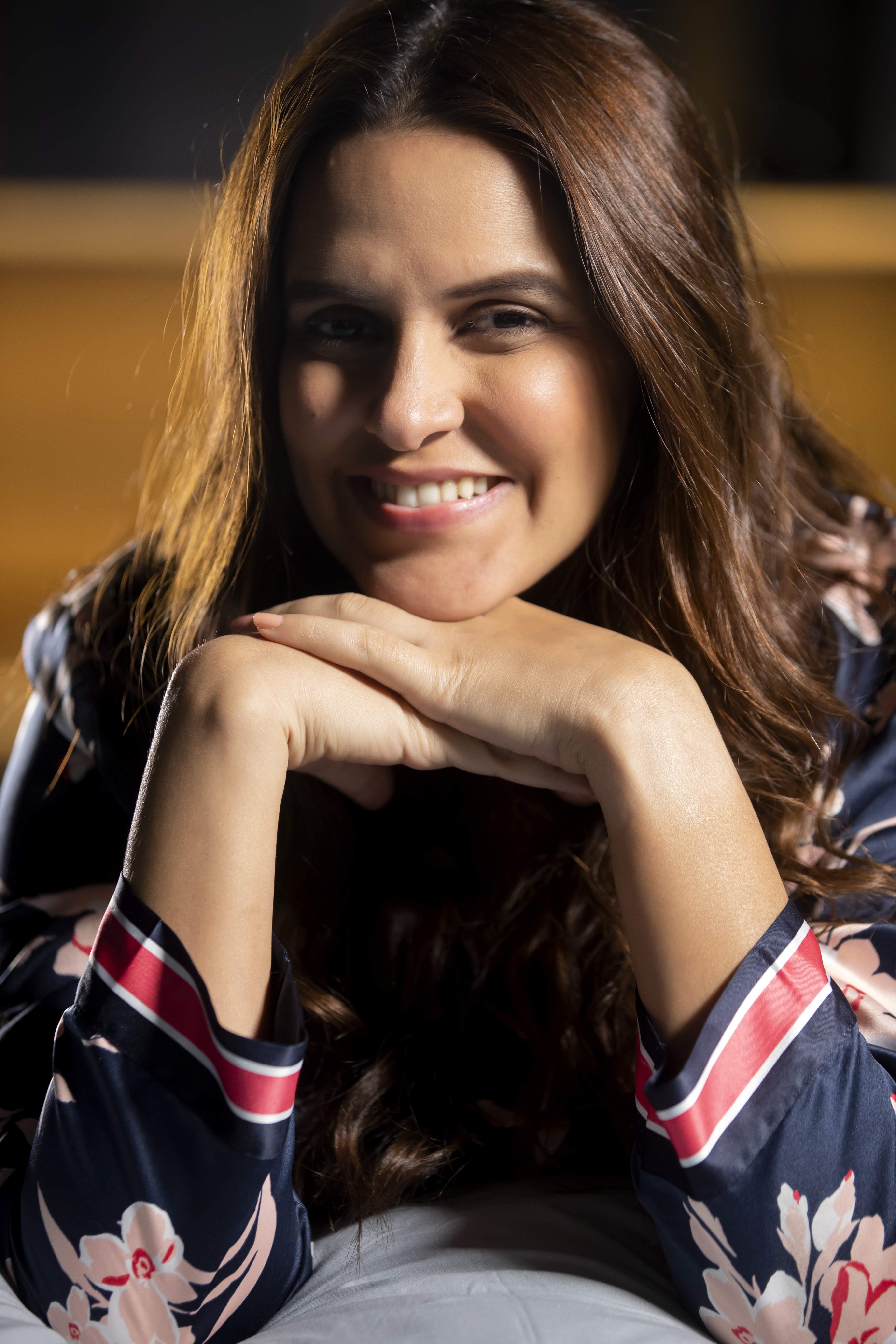 Quick takes:
On being a talk show host
“I’m looking forward to the new season of my talk show, BFFs with Vogue on Colors Infinity. We have a new bunch of best friends. The format is that of a typical talk show with a new set of physical games. I’ve always wanted to interview Shah Rukh Khan on the show, but I’ve not had the good fortune to do so, as yet.”

Her 3 am friends
“I’ve been fortunate to make many friends over the years, in the industry and outside. I’m still in touch with my college and school friends. I believe that friends are the ones who ensure you go to sleep happily. And, if you’re up at 3 am, you know you can call them. I have a great bunch that includes Karan Johar and Soha Ali Khan.”

Future projects
“I would like to explore the web space, and do more digital shows. Of course, feature films have always been my first love. I also want to have more seasons of #NoFilterNeha. All this, and being a 100 per cent mom.”