New Delhi, 8 March 2019: With an aim to explore the impact of French milieu on the Indian art today, Alliance Française de Delhi under the Back from France series, has announced Living Outlines, an exhibition addressing violence, politics and cultural memory in our times.

The solo-exhibition titled Living Outlines, featuring seven seminal works of the Indian contemporary artist, includes Reji Arackal as the second name for the Back from France series.

The series holds two solo exhibitions of two different artists every year in order to provide a platform to deserving young Indian artists who have returned from France after a stay of more than six months and now continue their practice in India.

Talking about the artists’ unique style, Director of Alliance Française de Delhi Jean François Ramon asserted, “In a completely different spirit than the first exhibition entitled Unwarping Time and dedicated to the works of Aishwarya Sultania, this new solo exhibition allows us to enter the plastic universe of Reji Arackal.”

Explaining the concept behind the exhibition, Curator Shruthi Issac says, “Living Outlines brings together history, mythology and current socio-political issues of displacement, violence and exploitation as seen by the artist, Reji Arackal.

Well-known for his non-conformity, Arackal’s art is rooted in and informed by the active and vibrant socio-political climate of Kerala and his art education in Kerala, Shantiniketan and Paris.”

Arackal began his education as an artist at the College of Fine arts in Trichur, Kerala. He went for his Master’s degree at West Bengal’s Visva Bharati University and with a French government scholarship, he studied in Paris at the Ecole Nationale Superieure de Beaux-arts, Paris. 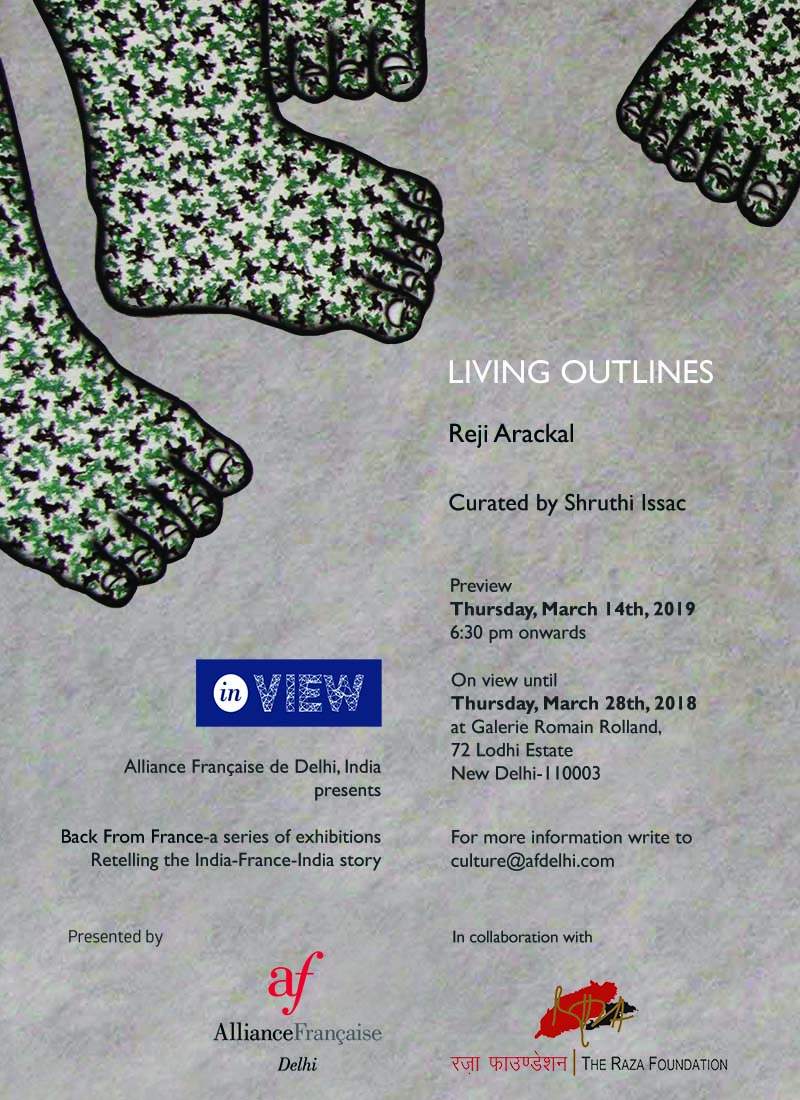 “The explicit and implicit violence inherent in the socio-political body has been a perennial issue for me since I started my career as an artist. My early canvases stand in this respect as they show different types of gestures and postures of a world of violence and which are extremely polished in order to obliterate any brush strokes. This is no paradox indeed. It is rather a direct representation of the nature of violence we come across in our daily life,” Arackal added.