The overview that the annual India Art Fair affords of the art world in India is incomparable to any other festival, event or gathering.

It is all, of course, a very business-like affair, led mainly by the galleries, rather than the artists themselves.

That really is a good thing, if you think about it.

And, that’s with all due accord to the path-breaking and innovative efforts of the hosts behind the landmark art festivals of the Kochi-Muziris Biennale, and the Serendipity Festival.

At India Art Fair 2020, the focus was almost squarely on the buyers, which immediately lent an aspect of worth and value to the hushed air hung over many of the more popular booths on display in the tented fair premises.

That did mean that idlers were almost instantly marked out, between the carpeted aisles, by the many watchful stall attendants and gallerists at hand.

There’s a marked difference in approach that must be handed out to the Art Fair’s new owners and management.

It was barely last September, after nearly a year of back-and-forths, that the MCH Group, the Swiss-based owner of the Art Basel franchise, decided to sell its majority stake in the India Art Fair to the Honk-based events company Angus Montgomery Arts, making it the sole owner of the New Delhi-based event.

It does help to know that the Angus group lends its considerable heft to many reputed festivals such as Photofairs San Francisco, Taipei Dangdai, Photofairs Shanghai, Art Central Hong Kong and Sydney Contemporary, among others.

Silence and peace
At India Art Fair 2020, quite like most previous editions of the fair, the mood was set by the booth right up front — that of GALLERYSKE from Bengaluru.

Not surprisingly, and again, quite like in previous IAF editions, the selected works of Navin Thomas, Sunil Padwal and Avinash Veeraraghavan were instant draws among fair attendees.

One thing had surely changed from the fair’s earlier outings. As a few Art Fair regulars noted, the talk about returning artists and their works had definitely taken a turn for the better, and was no longer in the negative gripe zone about works simply not moving or selling.

The other defining aspect for IAF 2020 was in an unstated approach of most gallerists to make the artwork accessible and approachable to younger and new art enthusiasts.

In simpler terms, this meant that there were fewer overheard encounters and exchanges to report from this edition of the fair, of viewers asking incredulously, ‘What does this sculpture mean?’ or raising baffled gestures of alarm over art pieces that seemed to elude any sense of understanding.

To put it another way, IAF 2020 appeared to have done something outsiders earlier considered to be entirely impossible — it was making the world of contemporary art easily understandable, even for people with a non-art background.

To that end, a few other galleries of note were judicious in hosting works that could be readily appreciated for the skill, craftsmanship and deft ingenuity at hand.

At the Apparao Galleries booth, for instance, gallerist and curator Sharan Apparao presented a spread of creations by Chennai-based artist D Dhasan that wasn’t just delightful to the eye, it was simple and pleasing enough to attract the attention of senior critics as well as large groups of excited youngsters.

The approach here was definitely making a difference — we were looking at works of contemporary art that everyone could enjoy, and didn’t necessarily need the prudential consent of a knowledgeable art-world appraiser.

Dhasan’s collection, Fragments of the Shunya, is primarily of paper-craft, but intricately worked by hand to an extent that can seem outrightly inhuman. The artist speaks of inspirations in silence and peace, while referencing concepts of ‘shunyata’ or nothingness, and the nascent origins of the natural world.

What mattered most yet were the elementary gasps of excitement and wide-eyed admiration among the viewers.

If these works weren’t goading critics to huddle over in overly deliberated discussions, they were winning over the hearts of viewers by being ever-so pleasing and nice in their aesthetic sensibilities.

For the outsider, the suggestion that the art world wasn’t finding new takers or buyers was suddenly something to balk and laugh at.

Innovation, integrity
Of course, you can never take the social cause out of an art fair, and there were many a notable series of artworks that made thought-provoking cases, and were extremely relevant to our current times.

In the midst of several lavish and at times, over-the-top assemblages of the old masters and the greats at the Art Fair, Shambhavi Singh’s collection, Bhoomi, hosted by Gallery Espace, made a fabulous example of driving home a serious line of thought, even if it was garbed altogether in seemingly simple-minded creations.

Primarily abstract, Shambhavi’s work derives motifs from agricultural iconography, and in some gloriously rendered installations and frames, the artist reminds us of a way of life that’s rapidly disappearing — that of agrarian India, and of the spirit of farmers being crushed by threats of urbanisation and climate change.

Bhoomi, in essence, is the sort of collection that takes one back to the origins of art collecting, of finding works that are eminently ownable, and also potent in their symbolic and intellectual merit.

Some of the nostalgia extended to the presentation of the Kolkata Centre for Creativity, led by a photography exhibition titled My Kolkata in Kolkata, curated by Reena Dewan.

The collection of images keenly sought to capture the irrepressible spirit of the city of Kolkata by the likes of Irfan Nabi, Dheeraj Paul, Prabir Purokayastha, Soham Gupta and Uma Nair.

The KCC segment also included a focus area on their initiatives to uplift local crafts in West Bengal, with a show of a typical, indigenous Tajia horse titled Mare and Tree, which was made by artisans along with art students.

To make a neat wrap of their showcase, the KCC also hosted an ‘Experiential Zone’ with tactile aids, based on the works of iconic master Jogen Chowdhury.

To reiterate the overarching intention here, the idea was to enable greater understanding among the masses, and to make art accessible to all.

In addition, KCC also launched a book in Braille, celebrating the life and work of the veteran artist Ravinder Reddy.

When viewed in the backdrop of many eminent and hugely reputed collections of leading modernists as well as giants of traditional art, the efforts of the Kolkata Centre for Creativity did stand out for their innovation, and a sense of integrity to a stated purpose.

Raise a curious gasp
There was an abundant number of other reasons to celebrate the India Art Fair 2020 — in hushed tones, or in exultant jubilation.

For one, the fair took care to make room for a vibrantly stocked and expanded bookshop and cafe, complemented by workshops and masterclasses aimed at students and young collectors.

There was also Auditorium Talks, a public platform for many an illuminating dialogue and discussion, featuring artist presentations, memorial lectures and conversations from across the art world.

The fair, notably, also partnered with the Godrej India Culture Lab to host a Film Programme on the theme, ‘Queering Culture’.

Among the more visible projects on the fair grounds were Magnum photographer Martin Parr’s live photo project with PHOTOINK, titled Death by Selfie, gently mocking a public obsession with selfies, and inviting visitors to participate in creating a body of rather fun images.

In the outdoor section, alongside installations by Rathin Burman and Anita Dube, Nigerian multimedia artist Jelili Atiku raised eyebrows and curious gasps through the course of the fair with his live durational performance, Nobody, enacted in a ceremonial-style performance.

For art enthusiasts looking for a showcase of traditional works, Pichvai Tradition & Beyond presented a magnificent display of Pichvai paintings, successfully making a contemporary celebration of the traditional art form, while making due note of its origins from more than four hundred years ago.

For art world initiates, it couldn’t get any better, to learn a thing or two about Indian and world art history, and begin their personal journeys as collectors.

Just the same, for Art Fair regulars on the return, the sense of studious quiet amidst so much chaos all around did bring upon a broad smile. 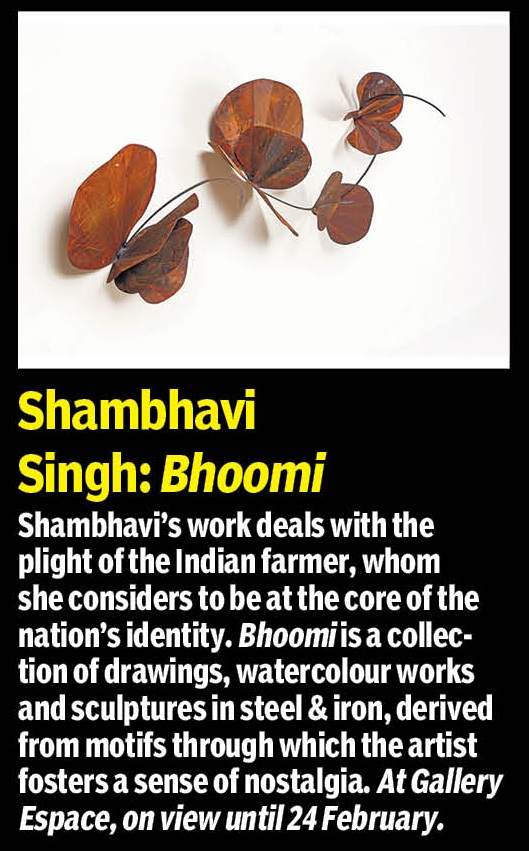 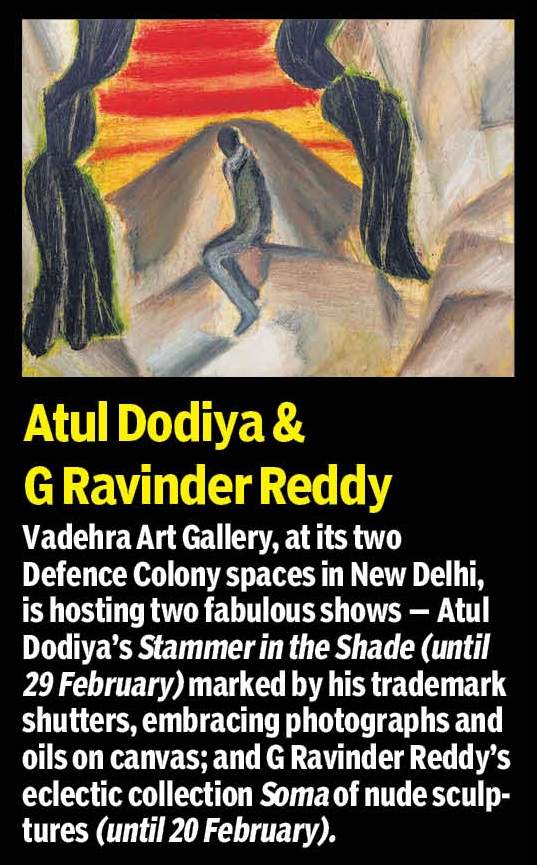 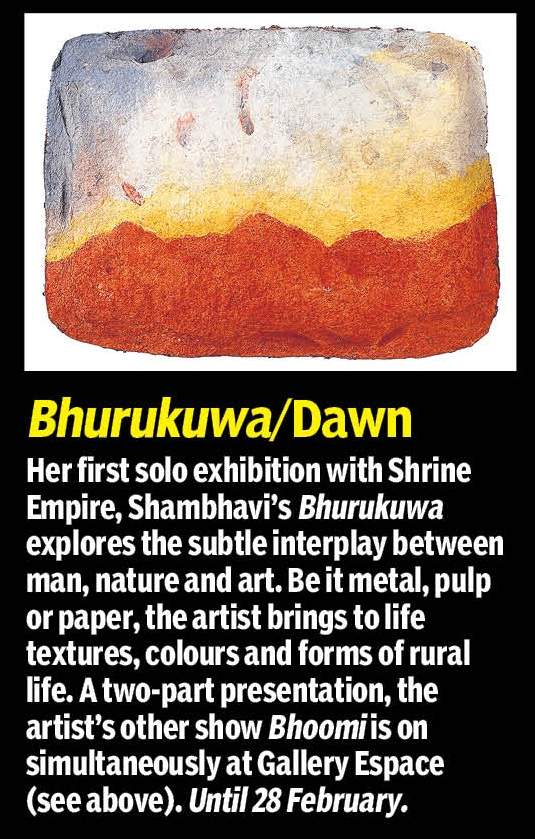 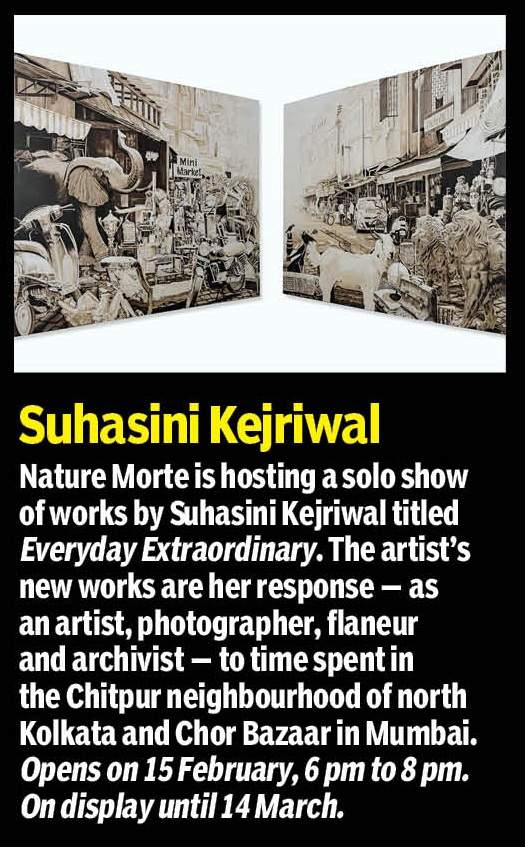