'I hope people find their meaning from the song,' says Lucky Ali about Amaraya, his latest single with Israeli musician Eliezer Botzer

Listening to Lucky Ali speak, is akin to hearing a wise, old friend speak to you. There is a certain calmness when he speaks. Something that’s much-needed during the present chaotic times that we are living in. The 62-year-old musician is in no hurry to finish one topic and move onto the next subject. The long pauses add an enchanting vibe to the conversation. On a Zoom call from his farmhouse in Yelahanka in Bengaluru, Lucky spoke with Indulge about his latest collaborative song, Amaraya (an Arabic word for mirror or reflection), which was released on March 31. This is the second track from the cross-cultural, work-in-progress album Lemalla (in Hebrew it means rising up and seeking within), by Lucky and Israeli singer-songwriter Eliezer Cohen Botzer. Today, as India grapples with the second wave of the pandemic, it feels like Amaraya, a song about hope, spirituality and divine connection, comes at the right time.

Meeting of cultures
The video of the song opens with the text, ‘When Lucky Ali, a devout Muslim and proud Indian, and Eliezer Botzer, an orthodox Jew and proud Israeli found each other, the music and poetry of their spirits immediately fused and ignited a new energy.’ Here’s how it be gan, Eliezer flew to Bengaluru in 2017 to meet Ali, “They approached us and wanted to collaborate on a song and came down with their entire crew,” remembers Lucky. “We worked on one song, and started sharing musical ideas, and it became a kind of dialogue between our cultures, since I come from India, and he comes from Israel; we were aware of our ancient backgrounds. It was the first time that we were working with our (respective) musical cultures, and it felt complementary to each other,” explains Lucky. Eliezer isn’t new to India. Way before his second long expedition to work with Lucky, the musician visited the country for the first time in 2004 along with his wife (out of curiosity) to know why so many Israelis came to India, particularly after serving in the army. He loved India from the time he set foot in the country. He liked it so much that he lived here for a few years, and worked on cultural festivals, film and farming projects, and with orphanages. “We loved the smells and the food, and everything about India. When we thought of collaborating with an Indian singer, we did a deeper search, and came across Lucky. We were fascinated with his music and deep voice. He is such a beautiful soul, and so full of love and care. We exchanged music, and ideas, and thought the best thing was to meet,” he shares, and hence began their partnership. The first song was On My Way that was released in November 2019. It was applauded globally as the traveller’s anthem, at a time when everyone could travel across the world without any restrictions or fear.

A Hindi-English track, it spoke about going back home, and both musicians visited their respective home countries, discovering each other’s nations, their people and cultures. It predominantly features Ali’s vocals and the soundscape has a larger-than-life feel to it with more contemporary notes. “On My Way was essentially a realisation of where we are going ultimately. We weren’t discussing a regular commercial song. We were discussing a piece of cultural involvement. It wasn’t just about making a track together; there was a deeper purpose and meaning. I believe the process was in trying to understand what this journey is. Home could be anywhere and we talk about a journey that involves discovery and being brave about it, which made it very special for me,” reminisces Lucky. On the other hand, Amaraya reflects the deep connection that the musicians have nurtured over the years. The song begins with the resounding beats of the tabla and it swiftly transitions to the melody of string instruments. It starts with Eliezer’s vocals in Hebrew, and Ali joins him to sing in Arabic. The latter continues in Urdu and Hindi, singing, ‘Jiské liyé chalé hum, uské liyé hum ruké (for that which we go forth towards… is for that which we stay waiting)… teri ibaadat ya rab… hum teré aagé hi jhuké (My God, it is only before you that… I bow my head and pray).’ The refrain in Arabic which translates to ‘we are all mirrors… and reflections of each other,’ is insightful of the times we live in. Classical Indian notes of the flute (by Muthu Kumar) and tabla (by Annada Prasanna Pattanaik) are the highlights of the soundscape of Amaraya. Artistic pursuit
The creative exchange between the artistes wasn’t just about their meetings in the studio. “It was an exchange of peace, it started with a salaam (greeting),” says Lucky with a smile. “The first time I met him, I was not familiar with his music. I had heard of him, and knew little bit about his music. His whole group of artistes came and took the effort to make this connection. They came here to the farm (Lucky’s farm in Bengaluru); we were working on the music in my home. Then we went to Israel, to Jerusalem and Tel Aviv,” reveals Lucky who went with his family to Israel by road via Jordan. “I went up to Jordan, and then on the other side of the border in Israel, Eliezer was waiting to receive us. Everyone on the bus freaked out because I kept smiling, and I may have appeared strange to them. Anyway, we got through, and he drove us up to Jerusalem where his family joined us. It was an amazing journey. For me it was a place of history. We went to Tel Aviv, we were writing, and we also shot in Jerusalem. It wasn’t planned, it just happened. I wanted to go, and I went. I would have liked to spend more time (but then it didn’t happen). It’s an association that has grown over the years,” says the singer.

Eliezer who travelled with Lucky across India, exploring the Himalayas, and places like Manali and Kasol, echoes Lucky’s thoughts, he says, “Lucky is open-hearted and so creative. We connected immediately, in the beginning we thought of collaborating for just one song. But the connection was so true; there was a lot of inspiration coming from within. There was difficulty because of our different languages but we saw it as a challenge, as well as an advantage. We spoke in English but our ideas were expressed in our native languages. We started playing together and then when we had the idea of what we wanted to say, we dove deeper and wrote our own parts. Only then we shared it to complete the full song,” explains the Israeli artiste. 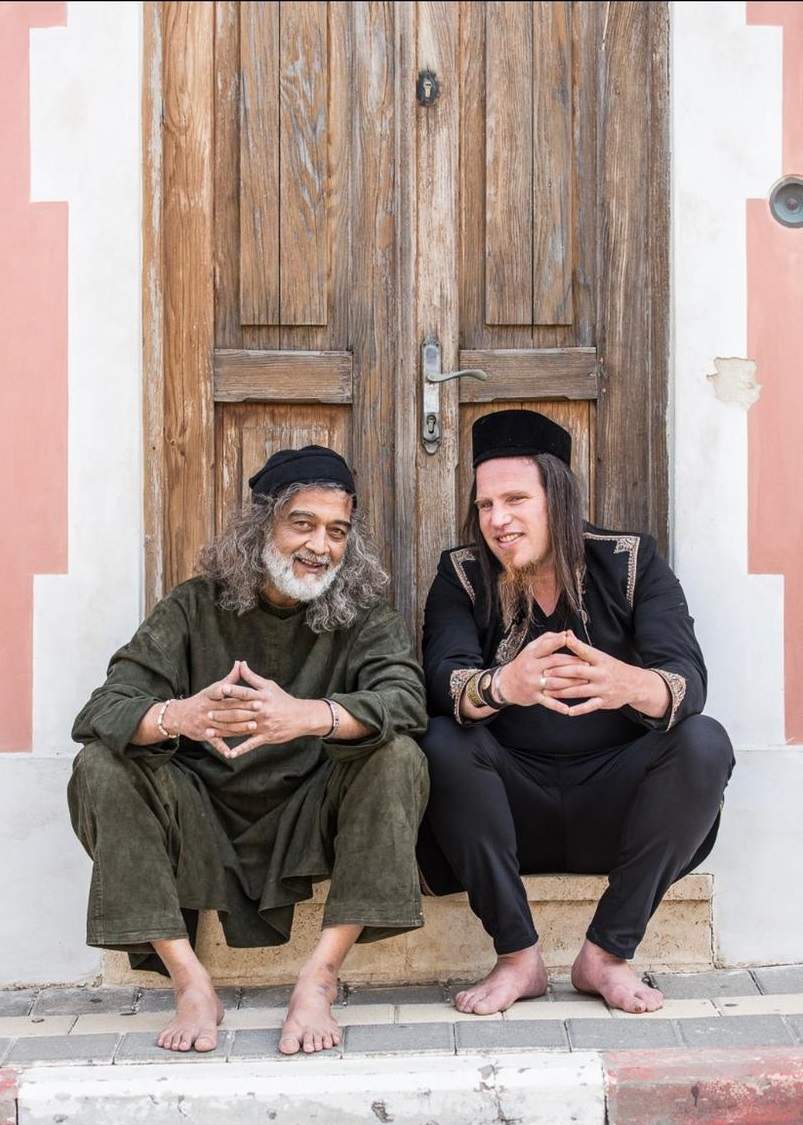 The track which is in Hebrew, Arabic, Hindi and Urdu expounds the connection of the human being with his creator and the creations around. There are several layers to the lyrics. Although it may appear simple, every sentence is insightful and holds deeper meaning within, for example, the lines in Hebrew which translate to, “like water reflects the face… the heart reflects the man.” Lucky says he didn’t quite infer Eliezer’s expression in poetry because he couldn’t understand the language but then the translations showed that these were deep and thoughtful words. “I was writing on the fly and my thoughts were just what I was feeling at that moment and I just put it on paper. But when you write you take that poetic license, to express something in a deeper sense. For example, in the lines, jiské liyé chalé hum, uské liyé hum ruké… you are questioning an entire journey – where are you headed? Why are you here? It is because of the largeness of the song, that we had to keep the lines simple,” he explains. However, Lucky confesses he paid much attention to the pronunciation of words, particularly in Arabic because it isn’t his primary language. “When I sang, I was very conscious because it isn’t the Arabic we read, it was the spoken word, so I wanted to get that right. There were people from Bengaluru who were helping me out.”

Peace for all
In the current times, when Israel is gradually consolidating its position in world politics, Lucky and Eliezer’s collaboration is of paramount importance. Their conversations and exchange of thoughts, and the consequential songs and the album Lemalla will perhaps send out a message of peace. “Their music and instrumentation is very rich. They come with a deep cultural background, and a lot of their musical traditions are similar to what we do here in India. Their music is familiar, but it’s grand and the expression is big. The songs came from a dialogue we were having. We kept speaking about what it is like for musicians in both countries, what directions do we adhere to, to take our art forward and we realised we are just reflections of each other. I believe the way this is turning out to be is because the people involved are putting their hearts into it. There is no music company involved, no aggregators involved,” says Lucky who agrees the pandemic has been tough on independent musicians. The duo is now working on the remaining tracks of Lemalla, and since both of them are fathers, they are also getting their daughters to sing with them. “We have songs with our daughters. The album includes love songs, and tracks in English and Hindi. It’s an album for harmony and friendship,” explains Eliezer. On a parting note, Lucky says, “I hope people find their meaning from the songs, just like how it has given me an understanding. I hope people build bridges just like how these guys (Eliezer and his team) took the initiative.”

Unplugged in Goa
Lucky’s impromptu performance at a music event in Goa went viral in December last year. He says it was totally unplanned and something he enjoyed doing. “It was not something I thought about. I didn’t even know where I was going. When Nafisa (Ali) aapa called me and said, ‘There are lots of musicians from different parts of India, you must come and see,’ I just went. Even the organiser asked me to come as it was a small gathering. I went and when the concert was over, I couldn’t get out and the musicians started playing my songs, and when O Sanam was performed, I knew I had to perform. I did that just because I had to do it. If I didn’t do it, it wouldn’t have been right,” the singer shares.