Things are getting tense in Bolly Twitter-verse as more and more people join the  #SuspendTeamKangana trend on Twitter, especially after the official Twitter handle of Kangana Ranaut recently slammed Ayushmann Kurrana and Ranbir Kapoor. Sacred Games star Kubbra Sait is the latest celebrity to blast Ranaut's Twitter handle and slammed it as toxic and also revealed that she has reported the handle. Team Kangana's page recently tweeted at Kubbra asking the actor why she has worked to hinder Kangana's freedom of speech? 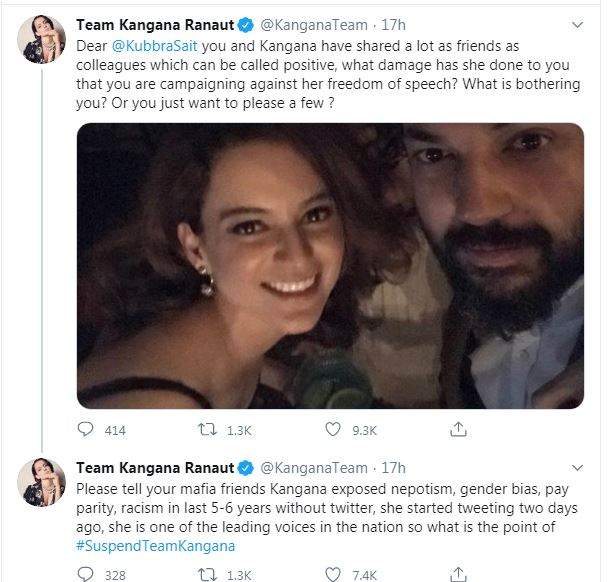 "Dear @KubbraSait you and Kangana have shared a lot as friends as colleagues which can be called positive, what damage has she done to you that you are campaigning against her freedom of speech? What is bothering you? Or you just want to please a few ?" the handle tweeted alongside a photo of the actors together.

Sait replied to the tweet and said, "This is not personal at all. Team Kangana Ranaut, your handle has been toxic. I unfollowed & reported you too. What I personally ask from you is this: Be kind. Be responsible. I don’t make things personal & I am pretty positive that you won’t either." 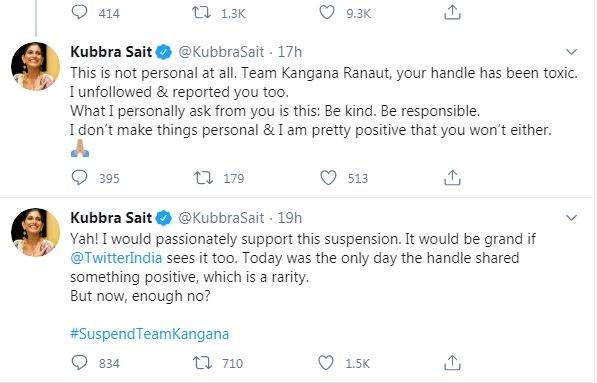 Kubbra also posted another tweet in which she supports the #SuspendTeamKangana trend that has been gathering momentum in the last few days. "Yah! I would passionately support this suspension. It would be grand if @TwitterIndia sees it too. Today was the only day the handle shared something positive, which is a rarity.  But now, enough no? #SuspendTeamKangana," she wrote.