A day after director S Shankar announced that he will be roping in Bollywood actor Ranveer Singh for the official Hindi adaptation of the 2005 Tamil blockbuster Anniyan, producer Aascar Ravichandran has hit out at the director saying this was “illegal” since he had sole ownership of the storyline.

Aascar was the producer for the original Kollywood version of the movie.

He took to Twitter and wrote, “I am utterly shocked to know that you are likely to undertake the direction of a Hindi film by adopting the story of the movie, Anniyan. You are well aware of the fact that I am the producer of the said movie Anniyan. The entire story rights were purchased by me from the writer Sujatha (alias late Rangarajan) for which full payment was done by me to him and necessary records are also available. I am the whole and sole owner of the rights of the storyline. As such, any such adaptation or remaking or copying the main plot of the said movie, without my permission, is totally illegal. (sic)” 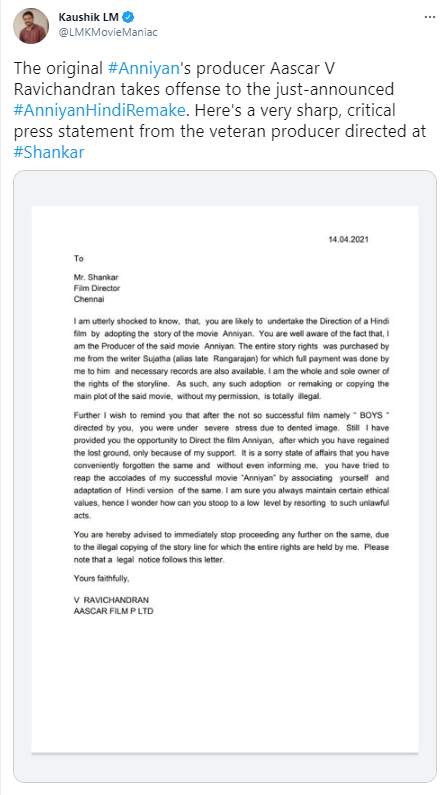 He also took a dig at Shankar over his lack of directorial acknowledgement at one point and said, “Further, I wish to remind you that after the not so successful film namely Boys, directed by you, you were severe stress due to the dented image. Still, I have provided you with the opportunity to direct the film Anniyan, after which you have regained the lost ground, only because of my support. It is a sorry state of affairs that you have conveniently forgotten the same and without even informing me, you have tried to reap the accolades of my successful movie ‘Anniyan’ by associating yourself and adaptation of Hindi version of the same. I am sure you always maintain certain ethical values, hence I wonder how can you stoop to a low level by resorting to such unlawful acts. (sic)”

Aascar concluded by advising Shankar to immediately stop proceeding any further with his plan, and added that a legal notice would be following “his letter.”

“You are hereby advised to immediately stop proceeding any further on the same, due to the illegal copying of the storyline for which the entire rights are held by me. Please note that a legal notice follows this letter,” he wrote.

Shankar announced on Wednesday that he will be bringing back the ‘larger-than-life cinematic experience’ with Ranveer in the official adaptation of Anniyan. He took to Instagram and wrote, “In this moment, no one will be happier than me, bringing back the larger than life cinematic experience with @ranveersingh in the official adaptation of cult blockbuster Anniyan.”

Anniyan was already released in Hindi under the name Aparichit, which was the dubbed version of the original Tamil movie.

Anniyan revolves around an innocent, stringently law-abiding citizen named Ambi who is anguished and frustrated by all the forms of law-breaking that occur around him—right from people not following traffic rules to railway operators not providing good quality food in return for the money passengers pay to travel by train.

The story is about what happens when this angst manifests itself into an alter ego in Ambi named Anniyan, who ends up taking the law into his own hands and killing all wrong-doers in cruel, ancient practices that are mentioned in the ‘Garuda Purana’, a religious text in Hinduism. Ambi is later diagnosed with multiple personality disorder.

What do you think about the controversy surrounding the ownership of the Anniyan story? Let us know in the comments section below: